Despite Princess Diana’s sapphire engagement ring having caused upset among the Royals, Prince William decided to propose to Kate Middleton with the same ring Prince Charles had used to ask for his mother’s hand in marriage.

Reports claim that when the People’s Princess passed away, her sons inherited her jewellery collection, which included the iconic 12-carat oval Ceylon sapphire engagement ring and while Prince Harry actually picked out the ring, after seeing William’s love for Kate, traded it for Diana’s Cartier watch.

Now that both Princes are married, Royal fans may start to see more of Princess Diana’s jewellery being worn by both the Duchess of Cambridge and the Duchess of Sussex, Meghan Markle having worn her late mother-in-law’s aquamarine ring to her wedding reception. 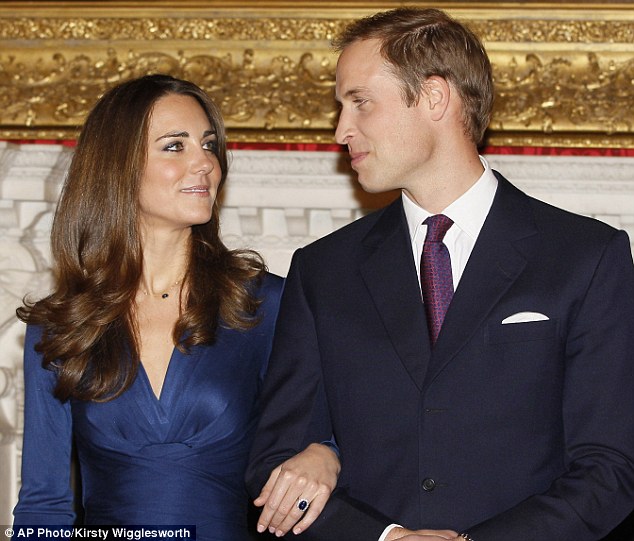 What does Princess Diana’s will say?

Princess Diana died in a car crash in Paris on August 31, 1997, a year after she divorced from Prince Charles, the father of her two sons, William and Harry. According to The Balance, Diana’s estate consisted of stocks in addition to her £17 million divorce settlement.

It also included jewellery, dresses and other personal belongings that were valued at approximately £21 million on the day that she died and netted her heirs £13 million, after taxes. But who did she leave her possessions to?

She signed her last will and testament on June 1, 1993, but modified the will with a codicil on February 1, 1996. The will stated that her estate would be left in equal shares in trust to her sons until they became 25, with her mother, Frances Ruth Shand Kydd and her sister, Lady Elizabeth Sarah Lavinia McCorquodale, to act as co-executors and co-trustees.

The codicil changed the trustees from her mother and her personal secretary, Commander Patrick Desmond Christian Jermy Jephson, to her mother and sister.

However, it was reported that because her mother and sister did not like the provisions of the will, months after Diana’s death, they were able to distribute her estate differently after obtaining a secret variation order from the High Court of Justice.

In addition to £50,000 that was left to her butler, Paul Burrell and ‘chattels’, or ‘personal effects’ which were left to her 17 godchildren, a Discretionary Fund was formed for Prince William, Prince Harry, their spouses, their descendants and charities, selected by the co-trustees. 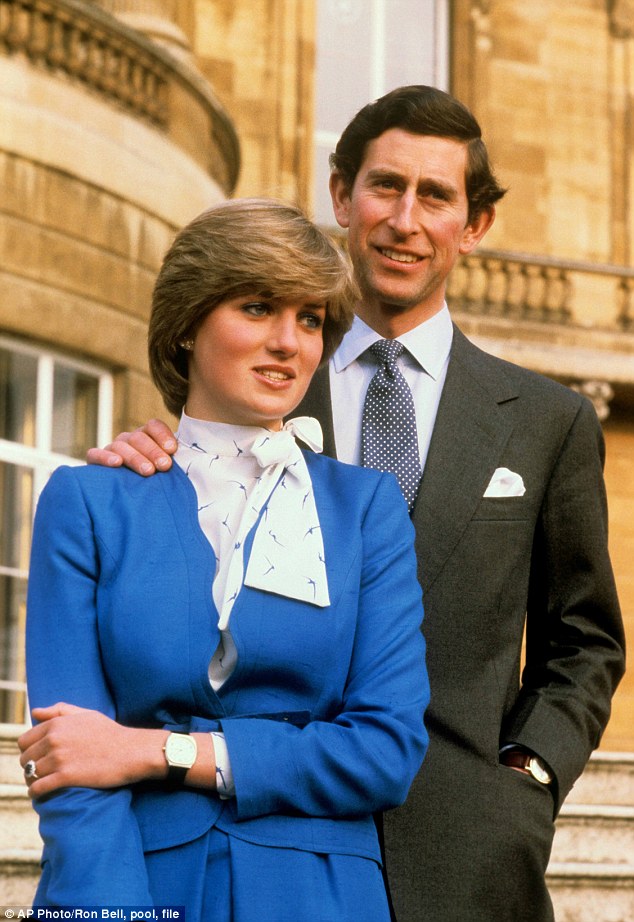 The Balance reported: ‘The Discretionary Fund received the following assets of the estate: intellectual property rights, all wearing apparel, £100,000, and accumulated income earned by the fund’s assets.

‘The Discretionary Fund is to be held for a “Perpetuity Period” which will last until 21 years after the death of the last surviving descendant of his late Majesty King George VI who was living on the date of Princess Diana’s death.

‘The income earned by the fund is to be distributed among the fund’s beneficiaries during the Perpetuity Period as the trustees see fit. Anything left in the fund when it expires will go to the then living descendants of Prince William and Prince Harry.’

What is referred to as the Residuary Estate was left in equal shares to William and Harry and the shares were held in trust until each Prince reached the age of 30. However, when they turned 25, they were given access to all the income and also, the power to change the final disposition of his trust if anything should remain at the time of his death.

At the time of each Prince’s 30th birthday, their Residuary Estate shares were worth £10 million each. 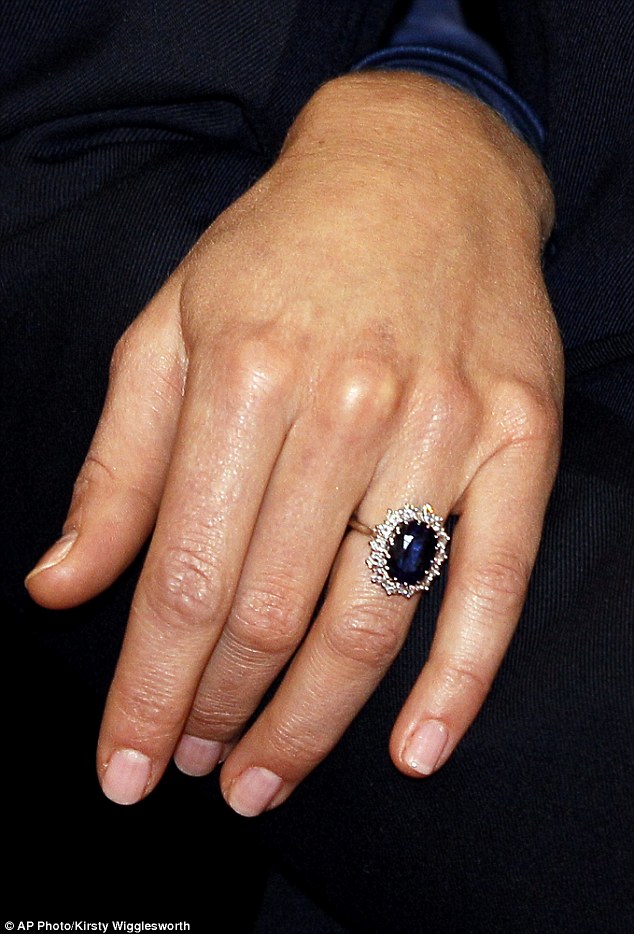 Kate Middleton wears engagement ring of Diana, Princess of Wales, as she poses for the media

According to The Telegraph, Diana’s Letter of Wishes stated: ‘But I would like you to allocate all my jewelry to the share to be held by my sons, so that their wives may, in due course, have it or use it. I leave the exact division of the jewelry to your discretion.’

After Prince William’s marriage to Kate Middleton, she has been repeatedly compared to Princess Diana and has also been spotted wearing her late mother-in-law’s jewellery. As reported in Good Housekeeping, the first piece that was given to Kate was her engagement ring.

While rumours emerged that Harry had picked out the ring originally, after seeing William’s love for Kate, he traded the sapphire gem for his mother’s Cartier watch. William carried the ring with him for three weeks while they were on holiday in Mount Kenya in 2010 and eventually proposed.

When the engagement was announced, the Duke of Cambridge said: ‘It’s my mother’s engagement ring, and it’s very special to me, as Kate is very special to me now as well. It was only right the two were put together. It was my way of making sure mother didn’t miss out on today and the excitement.’

As mentioned above, Kate has also been seen wearing the Lover’s Knot Tiara, which was made in 1914 with diamonds and pearls. It was given to Princess Diana by The Queen as a wedding present and once Kate married into the Royal Family, she inherited the piece.

The Duchess of Cambridge also inherited a pair of sapphire earrings from Diana in 2010, but they have since been updated to a drop style. Alongside this, Kate was also seen wearing a pearl bracelet, by Nigel Milne in 1988. While it wasn’t as iconic as the other pieces, the Duchess chose to wear it at a reception in Berlin. 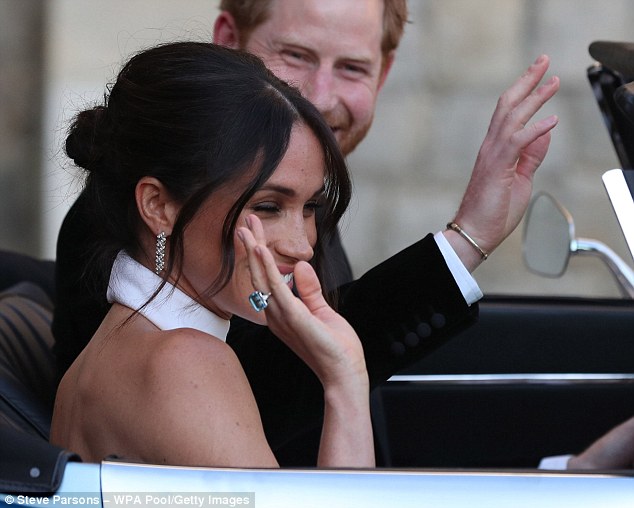 What will Kate inherit from Diana when the Queen dies?

Kate Middleton could also reportedly inherit Princess Diana’s title of Princess of Wales when The Queen passes away and Prince Charles becomes King, according to Elle.

Prince William will become William, Prince of Wales and Kate, the title of Princess of Wales.

The People’s Princess was the last person to hold this title after Camilla, Charles’ second wife declined taking up the title out of respect for her husband’s first wife.