What kind of Christmas spread would your pension pot buy?

Will your pension put smoked salmon and sourdough on the Christmas table, or will you have to settle for budget supermarket pate and white bread?

The pensions industry has built on its widely praised retirement income lifestyle standards research to produce research to show what your savings mean for your festive plate.

Those with minimal savings, who will rely almost entirely on the state pension, will be able to spend an estimated £36.20 on food and drink – including £2.99 wine and mince pies from Aldi, and a frozen turkey breast from Tesco.

But those with healthy pension savings can afford to spend more than £200 on a feast including £8 reserve wine, a turkey crown and cheeses from Sainsbury’s.

All three include the state pension, which is worth more than £9,000 a year. The rest of the annual spending is made up from private retirement savings.

The pension trade body says a single pensioner hoping to enjoy a Christmas feast worthy of a comfortable retirement lifestyle will need an annual income of £33,600 to be able to afford to budget £202 for a festive feast.

Nigel Peaple, director of policy and advocacy at the PLSA, said: ‘The good news is that pretty much everyone, thanks to the state pension, will more or less achieve the minimum level, especially if they are able to share costs in a couple. 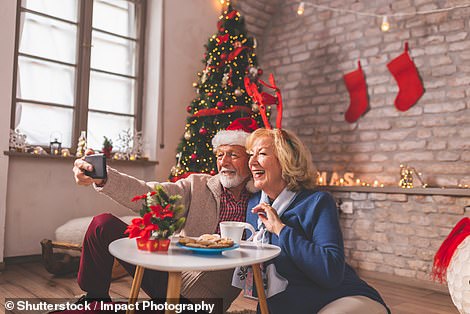 Those with minimal savings, who will rely almost entirely on the state pension, will be able to spend an estimated £36.20 on food and drink according to research (stock image)

‘And if you are one of the 80 per cent of employees who save in a workplace pension, and you are on average earnings, you will be well on the way to achieving the moderate level.’

The research reveals that those with a ‘minimum’ standard of retirement living will be shopping at Aldi and Tesco for Christmas. Those living a ‘moderate’ retirement will buy most of their festive food from Tesco and Morrisons.

And retirees enjoying a ‘comfortable’ standard of living will be able to splash out on groceries from Sainsbury’s and M&S. It comes after research from retail analysts Kantar last week revealed the cost of Christmas dinner for four, with fizz and pudding, had increased 3.4 per cent to reach £27.49.

The ‘retirement living standards’ are designed to give savers an idea of how much money they will need to keep up their spending habits.

This year, the PLSA updated its research to reveal couples will now need to find an extra £2,200 a year to maintain a comfortable retirement lifestyle after the pandemic. A ‘comfortable’ lifestyle includes £8 wine, two annual holidays in Europe and a restaurant budget of £500 a month.

But to fund this, a couple would need combined pension savings of nearly £750,000 to buy an annuity that would pay enough. 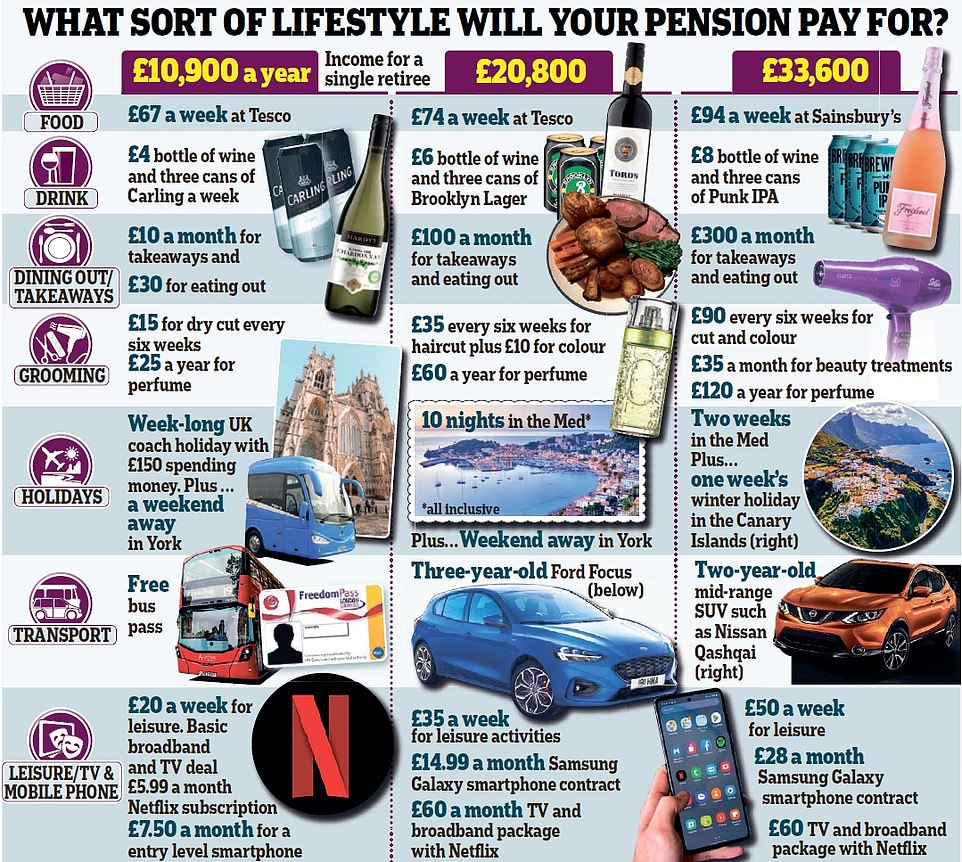 How much do you need to save for retirement?

The PLSA figures provide guidance on how much income individuals or couples would need each year to sustain different levels of lifestyle, writes Simon Lambert, and from this it is possible to work roughly how big a pension pot would be needed to provide it.

The first thing to take into account is the state pension. Those on the new full flat rate state pension currently get £179.60 a week, or around £9,300 a year.

For an individual this would leave a £24,300 annual gap that needs to be filled from a work or private pension or other source to get a comfortable retirement, which the PLSA estimates to cost £33,600 per year.

Couples benefit from shared costs and their comfortable retirement would need a combined annual income of £49,700.

Combining both their state pensions would deliver £18,600 of income a year, leaving a gap of £31,100 that needs to be filled between the two of them.

Those who have generous work final salary defined benefit pensions, where employers agreed to pay them a set percentage of their earnings for every year worked, have the best chance of filling the gap.

An individual with such a pension would need it to provide the £24,300 needed to bridge the gap between the state pension and a comfortable retirement, while a couple would need a total of £31,100 between them, or £15,050 each.

Almost all private sector final salary and other definined benefit schemes are now closed to new members and public sector schemes require members to pay in more than previously.

Past decades have seen a shift to defined contribution schemes instead – and there has been a massive uplift in those saving into such employment pensions from auto-enrolment.

With a defined contribution pension scheme, workers pay in a percentage of their salary and their employers pay some in too. This is invested into stock market and other investment funds in order to grow over the long term and deliver a retirement pension pot.

When they retire workers must use that pension pot to provide them with an income, either by keeping it invested and drawing on it, or by buying an annuity, which provides a set income for the rest of their life.

Analysts suggest that on average a safe level of income to draw from a retirement pot to avoid it running out is about 4 per cent each year, although some are more cautious and suggest a lower figure closer to 3 per cent.

With a 4 per cent withdrawal rate a couple would need a combined pension pot of £777,500 to get a comfortable retirement, or £388,750 each if it came equally from both partners.

How much should you save for your pension?

Pension experts typically say that rather than contributing 8 per cent of earnings under auto enrolment, people should be putting away at least 12 per cent.

One influential report said the UK should set a national target of every worker saving 15 per cent of their salary, including employer contributions and tax relief.

The good news is that pension tax relief, which gives a 25 per cent uplift to make up for basic rate tax for every £1 paid in and more for higher earners, and employer contributions go some way to meeting this figure.

So for example, for someone with a generous employer who will match their contributions up to a relatively high level, this would mean paying in just under 6.7 per cent of their salary, with their employer contributing the same and basic rate tax relief adding a further 1.675 per cent, to deliver a total of 15.075 per cent.

There are also some general rules of thumb for working out what percentage of your salary needs to be going into a pension, in terms of your and your employer’s contributions.