What shares does the British retail investing market love?

While some Britons took up baking sourdough bread or knitting to pass the time during the Covid-19 lockdowns, many others decided to dabble in the stock market.

This provided a financial boon for major investment trading platforms like AJ Bell and interactive investors, with growing numbers of novice retail investors.

But how much of the UK stock market is now controlled by DIY investors? What shares have the most individual shareholders? And how well rewarded have investors been for backing these companies?

New hobby: Many Britons used the time during the Covid-19 pandemic to take up retail investing, providing a financial boon for major investment trading platforms

What proportion of shares are held by retail investors?

Despite the pandemic-induced surge in first-time investors, only 12 per cent of UK quoted shares by value were held by UK residents at the end of 2020, according to the Office for National Statistics.

By comparison, a record 56.3 per cent were owned by overseas shareholders, a stark departure from the 1960s and 70s, when their respective holding, in percentage terms, was in single digits at a time of less globalised financial markets.

However, around a quarter of shares on the junior AIM market are owned by personal investors, many of whom are entrepreneurs who retained significant stakes when listing their businesses.

In addition, he notes there are tax advantages that people can gain from owning most AIM stocks, such as exemption from inheritance tax.

Suppose you seek to maximise long-term returns from your AIM shares. In that case, you can benefit from income tax and capital gains relief by investing via an ISA, enterprise investment scheme or venture capital trust.

How are shares held nowadays?

In more analogue times, someone would receive a paper certificate after buying shares to indicate ownership. Given how easy it is to lose, damage or have these documents stolen, it’s little surprise that most certificates are now held digitally.

As part of a process known as ‘dematerialisation,’ no more paper certificates will be issued from next year, while all traded securities must be held electronically by 2025. 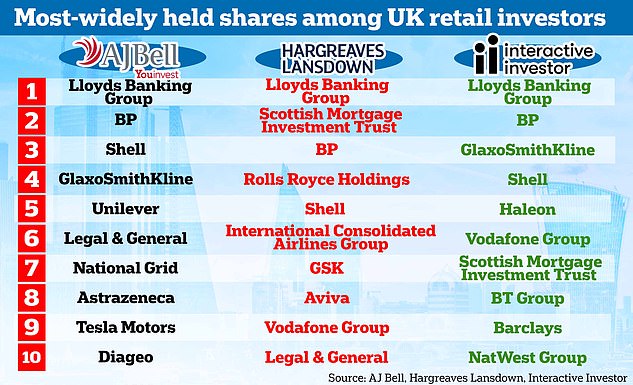 Footsie: Blue-chip companies tend to be highly regarded among DIY investors, given their prominence in share portfolios and reliability in providing healthy dividends

Traditionalists might want to consider putting their shares in a nominee account, where the overwhelming majority of individuals hold their shares, as it makes buying and selling them cheaper and easier.

They could also invest in ‘tax wrappers,’ such as ISAs and personal pensions, which save shareholders tax on the returns they earn from savings and investments, and have grown more prevalent in recent years.

‘It is clear that customers are now far more aware of the advantages of maximising returns by minimising the amount of tax they pay on their investments,’ said Richard Hunter, head of markets at Interactive Investor.

What are the most common shares held by individual shareholders?

Blue-chip companies tend to be highly regarded among DIY investors, given their prominence in share portfolios and reliability in providing healthy dividends.

For example, Imperial Brands and British American Tobacco have annual dividend yields of 7.6 per cent and 6.6 per cent, respectively, while mining giant Rio Tinto has a whopping 11.9 per cent yield. 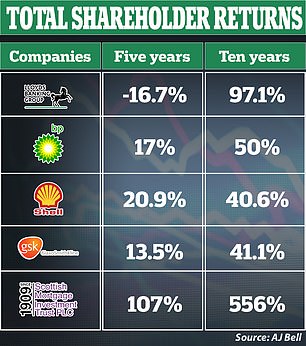 Good investment: Shareholders in Scottish Mortgage have seen a whopping 556 per cent return over the past decade

The most popular stock with individual investors who trade on AJ Bell’s YouInvest platform, Hargreaves Lansdown and Interactive Investor is Lloyds Banking Group.

Matt Britzman, an equity analyst at Hargreaves Lansdown, said: ‘It’s unsurprising to see a large blue-chip bank like Lloyds right up near the top of the list, as a long-time favourite of UK retail investors.

‘The bank’s exposure to interest rates makes it an attractive play in an environment where rates are rising faster than they have for quite some time – a fact that shone through in recent half-year results where net interest income shot.’

Also within the top ten of each trading platform are oil supermajors BP and Shell, which have benefited from soaring petroleum and gas prices in the past year – to much public controversy – and pharmaceuticals firm GlaxoSmithKline (GSK).

Surprisingly, only one foreign business makes the top ten list of any of the three trading platforms – Tesla Motors, despite how well US technology stocks have done since early 2020.

Laith Khalaf, AJ Bell’s head of investment analysis, said: ‘This may be because they think these shares are too expensive, or perhaps simply prefer the domestic market, or indeed may feel they have enough exposure to the US through the funds and trusts they also hold.’ 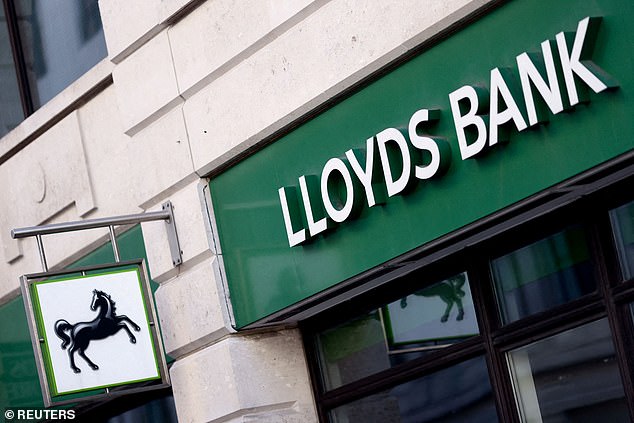 Top of the charts: Matt Britzman, an equity analyst at Hargreaves Lansdown, said Lloyds Banking Group’s ‘exposure to interest rates makes it an attractive play in an environment where rates are rising faster than they have for quite some time’

How have the most popular companies performed in recent years?

Both BP and Shell have reported astonishingly strong results in recent days, with the former declaring its best quarterly results in 14 years and the latter posting a second consecutive record quarter.

Correspondingly, their shares have seen their value bounce back after plunging in the early stages of the Covid-19 pandemic when travel restrictions and factory closures suffocated oil demand.

When measured on a five-and-10-year basis, though, their shares have declined, even though oil prices have been above $100 per barrel for much of 2022.

In contrast, the history of Scottish Mortgage Investment Trust shares has been one of considerable expansion. Those who invested in them five years ago have seen their returns more than double, but if you have held them for the past decade, your return has been a whopping 556 per cent.

The FTSE 100 has been quite a poor performer in the past 20 years relative to other indices like the Nasdaq primarily because of a relative lack of high growth and tech businesses, which dominated the last market cycle, and Brexit-related investor skittishness.

Now that the Bank of England predicts the UK will fall into a recession later this year, the immediate future looks uncertain for retail investors who joined the online trading rush during the pandemic. 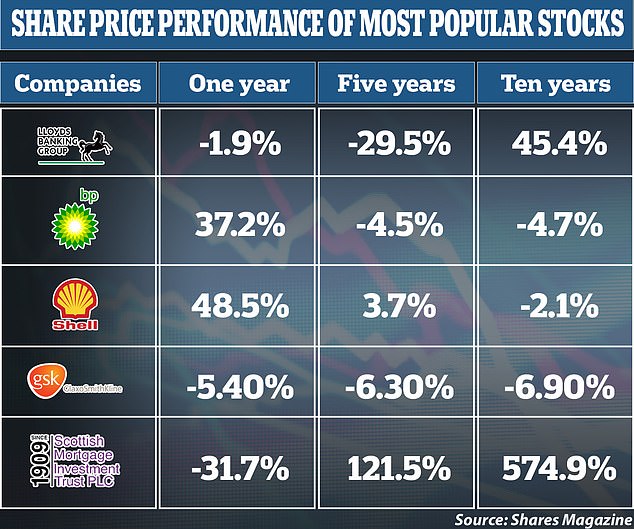 Long-term performance: BP and Shell shares have seen their value bounce back after plunging in the early stages of the Covid-19 pandemic when travel restrictions and factory closures suffocated oil demand