What the 2019 UK election means for your money

It’s been dubbed the Brexit election but the general election on 12 December 2019 is as much about tax, spending and competing visions for Britain’s economic future as anything else.

The main parties have all now released their manifestos and continue to outline their plans for the UK: ranging from Labour’s vision of a better socialist future, to the Liberal Democrats’ cornerstone policy of revoking Brexit, and the Conservatives mantra of Get Brexit Done and then reverse much of their own austerity measures.

Challenging the three main national parties for your vote – depending on where you live – are the Greens, Brexit Party, SNP, DUP, Plaid Cymru, independents and more.

There will be many things that make Britons decide on how to cast their vote, but a key element for many will be plans for tax, spending and the national finances – and how they will affect them and others.

We look at the Conservative, Labour and Liberal Democrat manifestos in the articles linked below.

This is Money won’t tell you how you should vote, but we have three tips for deciding:

Labour, Lib Dem and Tory plans and your money

It would try to negotiate a new Brexit deal with the EU – most likely involving staying within a customs union or similar – but then put it to a second referendum vote where MPs could campaign to remain and Jeremy Corbyn would remain neutral. 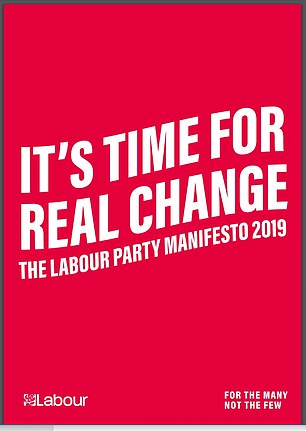 Labour plans to spend an extra £82.9billion, but claims it can fund this with £82.9billion in extra tax income. A Funding Real Change document explains how this would work.

The plan to reimburse women caught out by the rising state pension age is not included in this and Jeremy Corbyn says this would be funded from government reserves and extra borrowing.

The removal of the personal allowance would therefore mean an effective 67 per cent income tax rate under Labour between £100,000 and £125,000.

Corporation tax would rise from its current 19 per cent back up to 26 per cent and stock market listed companies would have to hand over 10 per cent of their shares to an employee ownership fund. Dividends from this up to £500 would go to workers, the rest to the state.

Other measures include shoring up workers’ rights, a rent cap and more childcare.

We run the rule over what Jeremy Corbyn is offering voters and what it would potentially mean for your personal finances.

> What would a Labour government mean for your money? 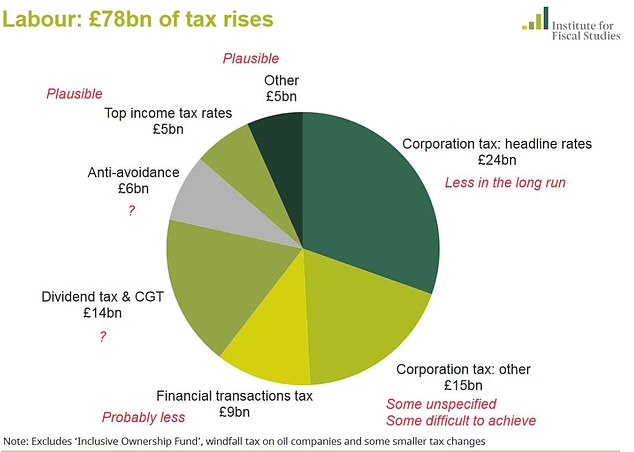 It says only the top 5 per cent of earners would pay more tax, albeit that doesn’t necessarily equate to the same proportion of the nation’s wealthiest people.

Capital gains tax will be brought into line with income tax rates, spelling big tax hikes for those who sell shares, funds, buy-to-lets or second homes.

Capital gains tax rates will shift from 10 per cent and 20 per cent for shares, funds and other assets, and 18 per cent 28 per cent for property, to 20 per cent, 40 per cent, 45 per cent or 50 per cent.  The annual exempt CGT allowance of £12,000 would be removed with a nominal £1,000 one brought in but gains only charged above the return made over the same time from interest on government bonds.

Dividend tax would be brought into line with income tax rates too, and the £2,000 annual dividend allowance axed.

These moves would affect small investors and may fall particularly hard on pensioners who have built up share and fund investments to support retirement – and small company bosses and directors.

Labour will scrap a tax break which can save £250 for married couples earning less than £50,000, albeit this is not widely used.

Labour would scrap the Tories’ extra inheritance tax uplift, known as the ‘main residence nil-rate band’, which from next April will add up to £350,000 of tax-free allowance (£175,000 each) for married couples leaving homes worth that much to direct descendants.

Labour would restore the main inheritance tax threshold to £325,000 for everyone, taking the potential IHT-free limit for a married home-owning couple down from just shy of £1million now to £650,000.

Labour would scrap university tuition fees, which currently cost as much as £9,250 per year. 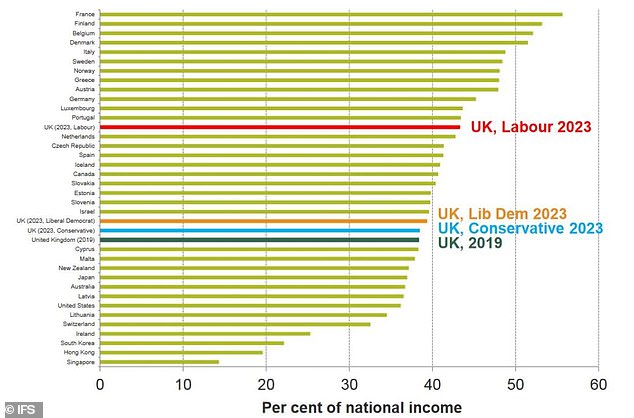 Crucially, however, the IFS adds that Labour’s plan is rare in that it thinks that this will be done by targeting only higher earners

The cornerstone of the Liberal Democrat campaign is to revoke Brexit if they were elected as a majority party. 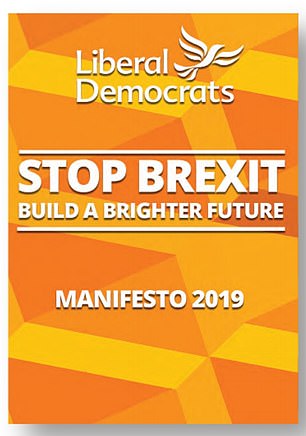 They would tax capital gains as income and add 1p in the pound to basic rate income tax to help fund social care and the NHS, delivering 21p, 41p and 46p rates.

Councils would be able to impose big council tax hikes on second homes and a rent to own scheme allowing tenants to gradually buy their homes would be introduced.

The Lib Dems would raise corporation tax from 19 per cent to 20 per cent.

The party would keep the popular state pension triple lock, which guarantees rises of at least 2.5 per cent a year for the elderly.

But while the Lib Dems have expressed sympathy with the Waspi women affected by the state pension age increase from 60 to 65, it hasn’t made them the kind of big compensation offer Labour is touting.

We run the rule over what Jo Swinson is offering voters and what it would potentially mean for your personal finances.

> What would a Lib Dem government mean for your money? 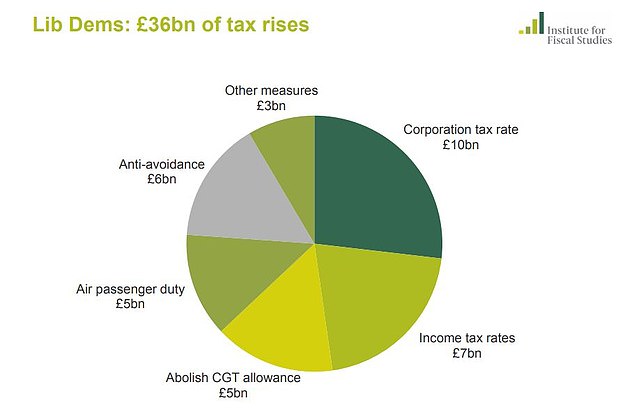 The IFS has analysed where the Liberal Democrats would raise taxes

A £7billion a year fund created by putting an extra 1p on income tax (outside Scotland) would be spent on relieving the social care crisis, and on the health service more generally. That would see rates rise to 21p, 41p and 46p.

In the longer term, the Lib Dems would look to introduce a ‘health and care tax’, offset by other tax cuts, following a wide public consultation

The Lib Dems would abolish the separate capital gains tax-free allowance of £12,000, and tax gains at income tax rates.

As with Labour, these moves would affect small investors, pensioners selling share and fund investments to support retirement income – and small company bosses and directors cashing in on building a business.

Local authorities would be able to increase council tax by up to 500 per cent where homes are being bought as second homes plus a stamp duty surcharge if you are buying as an overseas resident.

Individuals, employers and councils could top up the wallets to be spent on education and training throughout adulthood.

A range of training course providers would be monitored by the Office for Students and the higher education regulator, and certified by the Government.

The policy is estimated to cost £1.62billion, and would be funded by an increase in corporation tax to 20 per cent and capital gains tax hikes.

The Conservative manifesto was thinner than others and contained less promises: the main one in case you haven’t noticed is to ‘Get Brexit Done’. 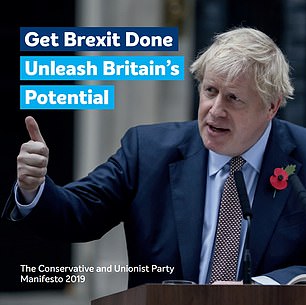 The Tories would seek to get Boris Johnson’s Brexit deal through in time to leave the EU on 31 January 2020.

They have also committed not to extend the implementation period beyond December 2020, a move that has drawn some criticism due to the disadvantage the Article 50 time limit has already put on the UK in negotiations.

The Tories say: ‘We will keep the UK out of the single market, out of any form of customs union, and end the role of the European Court of Justice.’

What is in the manifesto includes, a rise in the National Insurance threshold, a social care promise, new superbus networks, more help for tenants and a crackdown on abusive employers.

The Conservatives have promised to spend big on the NHS, schools and infrastructure, a so-called ‘transport revolution’, and target improving the environment.

The Tories issued a triple pledge on tax: they will not raise income tax, National Insurance or VAT in the next parliament.

The Conservatives will forge ahead with a digital services tax, which will slap a 2 per cent levy on the revenues of large search engines, social media platforms and online marketplaces derived from UK users (above the first £25million) from next April.

Those hoping for a cut to stamp duty have been disappointed, although this could potentially be deliberately left out so as not to be seen to be benefiting the wealthy and then brought in at a Budget.

Boris Johnson does appear to have found a magic doctor tree though, with a promise of 5,000 more GPs and 50,000 extra nurse, although 18,500 of those will be existing ones persuaded not to quit.

We run the rule over what Boris Johnson is offering voters and what it would potentially mean for your personal finances.

> What would a Conservative government mean for your money? 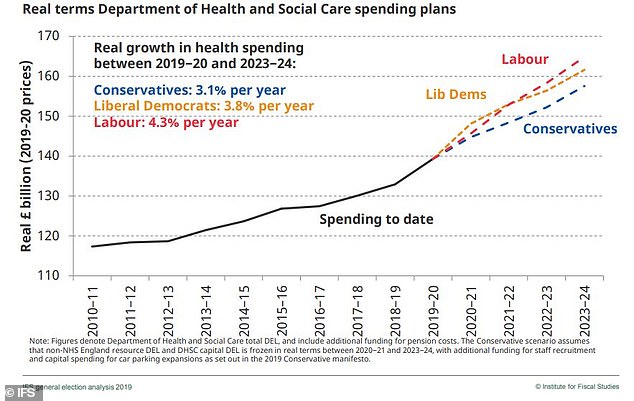 The IFS has analysed how the different parties plans would mean extra money for the health service, with Labour and the Lib Dems offering more than the Conservatives

The personal allowance for income tax is already £12,500, and the manifesto declares: ‘Our ultimate ambition is to ensure that the first £12,500 you earn is completely free of tax – which would put almost £500 per year in people’s pockets.’

The Conservatives say they will keep the triple lock – which guarantees state pension rises of at least 2.5 per cent – the winter fuel payment, the older person’s bus pass and other pensioner benefits.

They also promise a comprehensive review of how to fix a tax anomaly which sees workers, mostly women, earning between £10,000 and £12,500 lose pension top-ups automatically paid to the better off.

The party has just come out with a one-year fix for the so-called ‘taper problem’, which sees doctors turn down shifts for fear of massive pension tax bills. This is an issue triggered by the Tories’ own pension tax relief taper – there is huge pressure to  axe this entirely.

At the heart of the Tories’ offer is a ‘guarantee’ that no one needing care will have to sell their home to pay for it. It aims to make an urgent attempt to build a cross-party consensus on funding social care. 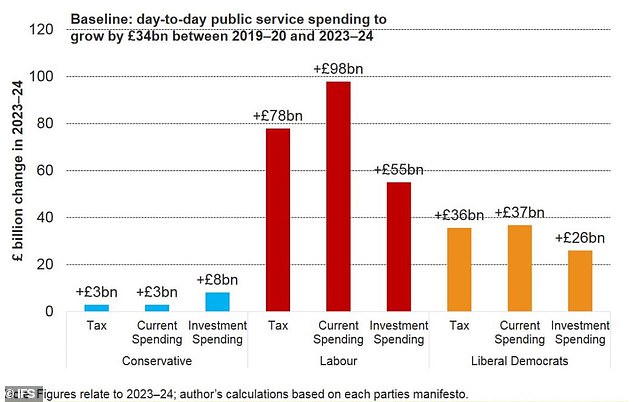 Although the Conservatives have pledged to spend more on public services and investment, their figures are dwarved by both the other main parties’ plans to spend 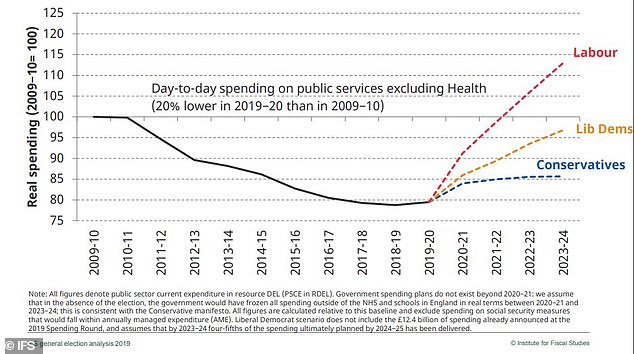 Despite major spending plans, only the Labour manifesto would see more money spent in real terms on public services than compared with 2010, once health is excluded