What the fork?! ‘Un-Australian’ moment an AFL fan eats a meat pie at the footy using CUTLERY

What the fork?! ‘Un-Australian’ moment an AFL fan eats a meat pie at the footy using CUTLERY

Video of a woman eating a meat pie with a fork is doing the rounds on social media, with thousands of users calling out the odd way to eat the Aussie-favourite.

The video was posted on Instagram page Brown Cardigan under the caption: ‘If this doesn’t rattle your cage, then you’re not Australian’.

The amateur video – taken at Thursdays night’s AFL clash between Richmond and Collingwood at the MCG – has more than 100,000 views and counting, and has garnered thousands of tongue-in-cheek comments.

‘Steve Irwin is rolling in his grave,’ one user wrote, while another joked: ‘This woman is a monster.’

‘This is everything that’s wrong with modern Australia,’ a third noted.

‘She shouldn’t be allowed to buy a pie again’

‘Yeah I dig it. Fantastic use of resources right there’ and ‘then you have a mess free crunchy pocket to eat after’ were among the messages of support.

‘Well it should be a spoon… still impressed with the forethought’, another follower commented.

‘I’ll allow this if she eats the rind afterwards. Like a biscuit. Could be alright.’ 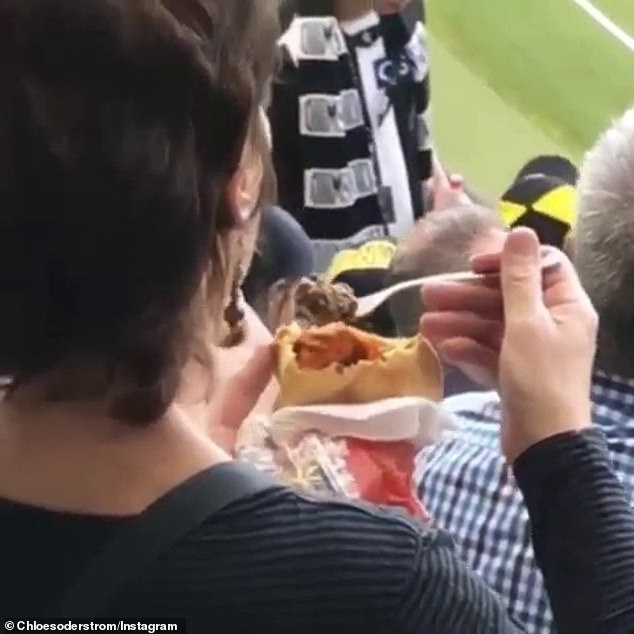 The amateur video – taken at a recent AFL game at the MCG  – has garnered thousands of tongue-in-cheek comments.