What to cook this Christmas for loved ones living with cancer

What to cook this Christmas for loved ones living with cancer: It’s a cruel side effect, the way chemo can wreck your tastebuds, but there are ways to bring them back to life

By Sally Wardle For The Mail On Sunday

For as long as I can remember, my family Christmases have centred around food. But last year, the festive break was a little different.

Just days before the big day, my mother, Kate, then 57, had a cancerous tumour removed from her bowel. Instead of enjoying mounds of turkey and trimmings followed by her beloved Christmas pudding, she barely had an appetite at all.

And when she began chemotherapy, her tastebuds dulled and she couldn’t even face her favourite curries. So I was intrigued to hear of a project that aims to tackle the problem of what to serve people undergoing cancer treatment over the festive period.

Its founder, food stylist Ryan Riley, nursed his mother Krista through lung cancer before she died in 2011.

‘My mother loved festive food, so seeing her unable to enjoy the treats she’d always relished was heartbreaking,’ says Riley, 26.

We’ve teamed up with Life Kitchen to bring you these festive recipes, which are designed for those living with cancer.

Nothing kills festive joy like cancer. So here’s a sprinkling of Christmas cheer that may have you reaching for seconds.

For the pickle, combine the vinegar, honey and star anise in a small saucepan. Stir well and place on medium-high heat and bring to the boil. Then turn down the heat, tip in the mushrooms and simmer for 1 minute. Transfer to a heatproof bowl and leave to pickle.

Remove the camembert from its packaging and place on to a square of baking paper on a baking tray.

Dot the cranberries on top of the camembert and poke in the rosemary sticks.

Place in the centre of the oven for 15 to 20 minutes, until the camembert is oozing and melted.

When cooked, discard the rosemary and leave to cool for a few moments before spreading on to bread, then pile high with the mushrooms. 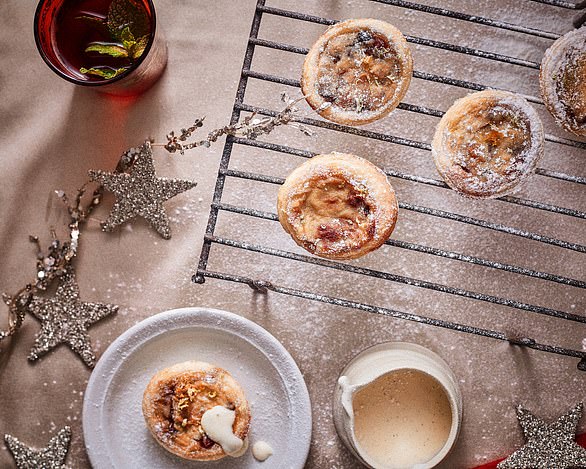 Preheat oven to 180C and lightly grease a tart tray with space for at least 12 tarts. Unroll the pastry sheet and, using a standard highball glass, cut out 8-12 circles. Press the pastry circles gently into the holes, pushing softly up the side.

In a bowl, mix together the mincemeat, pomegranate and half the orange zest and blend well. Gently spoon 1 teaspoon of the mixture into each pastry case. Glaze the edges with a little milk using a pastry brush.

In a separate bowl, whisk together the custard with the miso. Using a  teaspoon, spoon over the miso custard until it just covers the top of the pie filling. Bake for 15-18 minutes until pastry is crisp and the custard is golden and bubbly. Finish with a sprinkle of orange zest and serve warm. 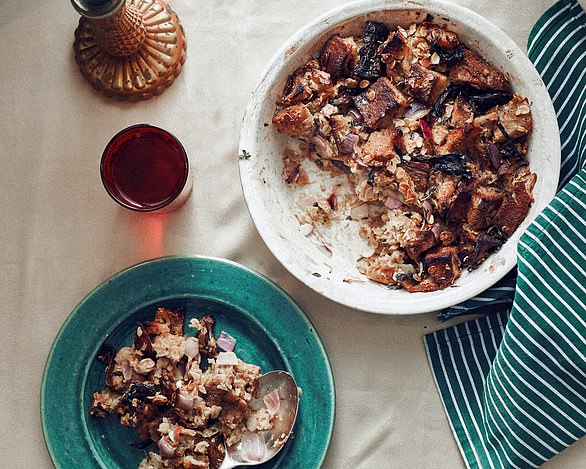 Then pour in the mushroom stock and mushrooms. Mix together, ensuring the bread is covered and liquid is soaked in. Transfer the mix to a baking dish and place in the centre of the oven for 35-40 minutes, until the top is golden. 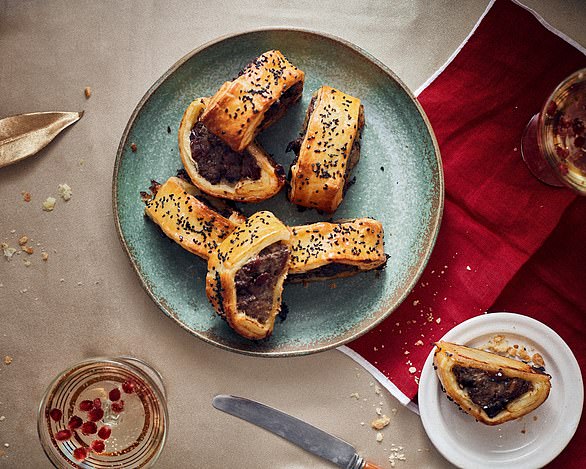 Preheat the oven to 190C and line a baking tray with greaseproof paper. Combine the white pepper, cinnamon, coriander, cumin and salt.

Tip the mince into a large mixing bowl with the dates and spice blend.

Mix well – but be careful not to over-mix. Then roll into a sausage shape.

When the pastry is at room temperature, unroll it and position it horizontally to you. Place the sausage meat along the side nearest to you, leaving a 2cm-gap edge.

In a bowl, make an egg wash by mixing the egg, milk and nigella seeds. Brush the edge of the pastry opposite you with a little of the egg wash.

Take the edge of the pastry closest to you and roll it around the sausage meat, then continue rolling to create a barrel shape.

Turn the sausage roll over so that the seam is underneath then cut into 8 to 10 pieces.

Carefully transfer the rolls over to the lined baking tray, brush with the egg wash and sprinkle on the nigella seeds.

Bake in the middle of the oven for 25 to 30 minutes until pastry is golden. 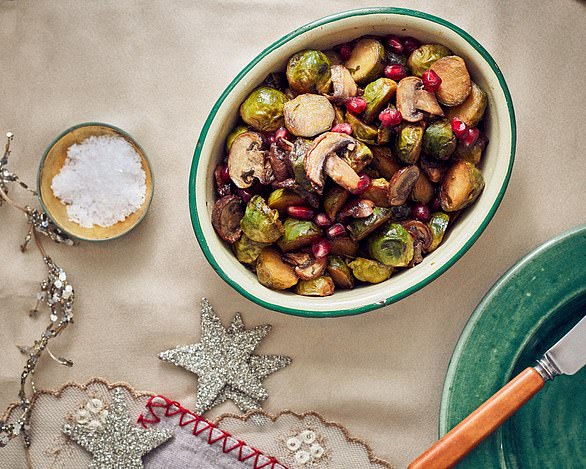 In a small bowl, whisk together the maple syrup, miso paste and tarragon, then season generously.

Tip the mushrooms and sprouts into a baking dish and pour over the maple mixture. Toss to coat.

Roast in the oven for 45 minutes until deeply golden.

Remove from the oven, add the zest and juice of the lemon on top and mix, before transferring to a serving dish.

THE MAGIC INGREDIENTS THAT CAN RESCUE THE FLAVOUR OF YOUR FOOD

Some of the ingredients in these recipes may seem unfamiliar. But these are key flavours that counter the effect of cancer treatment – such as radiotherapy and chemotherapy – on patients’ tastebuds. Mushroom stock and miso (a fermented soy paste), for instance, add a deep ‘umami’ flavour often detected when sweet or bitter flavours are not. 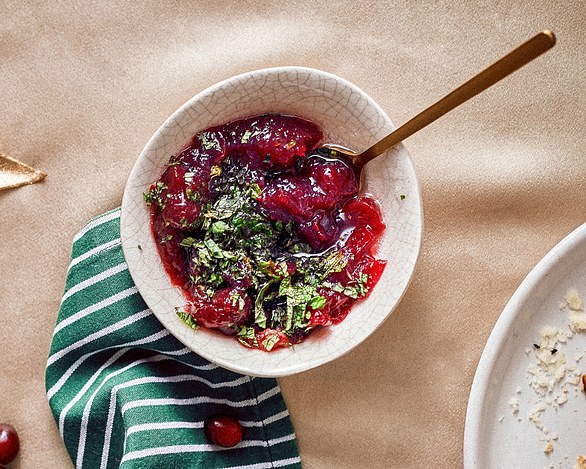 Combine the chopped mint with the cranberry sauce and stir well. For a smoother consistency, whizz together in a blender. 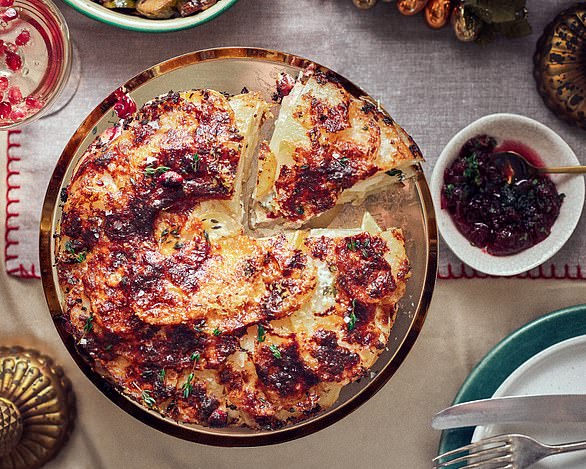 Gently warm the cream, horseradish, mustard, parmesan, herbs and cranberries in a small pan until the cranberries burst – about five minutes. Mix together and take off the heat. In a loose-bottomed cake tin, layer the potato slices until the bottom is covered and, using a pastry brush, lightly glaze the slices with the cranberry cream mixture. Then add another layer of potato slices, followed by a layer of cranberry cream.

Repeat this several times until all the potato is used up. Dot the top of the cake with knobs of butter and extra parmesan and bake for 1 hour 15 minutes until the top is golden brown. When cooked, leave to cool for 10 minutes, then run a knife around the edge to release it and place on a serving dish.

Life Kitchen, Recipes To Revive The Joy Of Taste & Flavour, by Ryan Riley, is out on March 5 (Bloomsbury, £20)