What to do around Poland’s third largest city, Lodz

Lodz might be hard to pronounce (it’s ‘woodge’), but you will soon get into the swing of Poland’s third largest city.

I quickly settle in, sipping chilled Polish beer on the patio of Piwoteka, a pub serving local craft brews.

The streets are filled with lively groups spilling onto the pavement. A row of grand, if faded, buildings provides a backdrop, in a hotchpotch of styles from art nouveau to baroque.

On the up: Lodz’s old industrial buildings are now apartments, boutiques, bars and restaurants

The city fell into a bleak period, known as Grey Lodz, after the war.

But now street artists have gilded the grey with bold murals, while old factories have become village-style hubs featuring apartments, boutiques, bars and restaurants in a decade-long, post-industrial reinvention.

There’s a buzz at the former textile mill Manufaktura. Its brick buildings surround a public square and house MS2 — a gallery with works by Picasso and Warhol — a cinema, the charming Museum of the Factory, plus eateries and bars with outdoor tables.

The complex is dominated by Vienna House Andel’s Lodz, a stylish hotel whose guests have included Snoop Dogg, the U.S. rapper.

The hotel’s restaurant, Delight, is one of the city’s best for hearty local dishes such as smoked goose breast, tangy pickled herrings and pierogi (filled dumplings).

Manufaktura is steps from Piotrkowska, the country’s longest street (2½ miles).

A stroll takes me past Rose Passage, where the exterior of an old weaver’s cottage has been encrusted with mosaics. 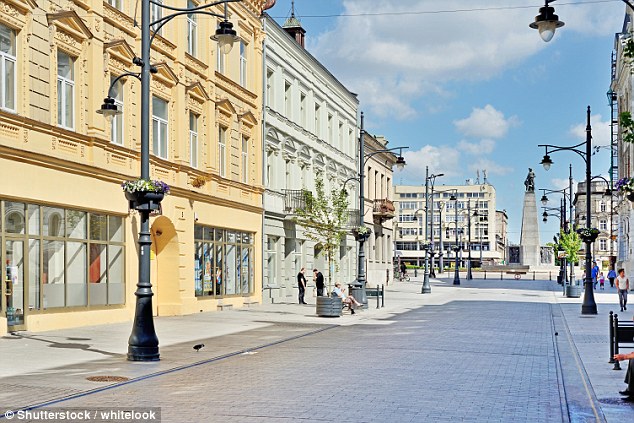 View from the terrace: Stop for a drink on Lodz’s main street, Piotrkowska

The city’s Walk of Fame, nicknamed Holly-Lodz, outside the Neo-Renaissance Grand Hotel has a star for pianist Arthur Rubinstein who was born in the city.

Further up is Off Piotrkowska with independent shops, food trucks and hip hangouts. Bearded young waiters serve burgers and cocktails in Mitmi Restobar.

Back at Vienna House I head to rooftop bar SKYFLY for a vodka-splashed drink. Sunset soaks the old factory bricks with an orange glow, while the square below hums with chatter and clinking glasses.

Lodz has come a long way — and it shows no signs of stopping.