What UK investors need to know about the Coinbase IPO

Even by recent stock market standards there’s a serious hullabaloo surrounding the Coinbase listing today – and with trading US shares proving increasingly popular, some British investors will be considering buying in.

Coinbase is expected to sail near a $100billion valuation with its direct listing and stock exchange Nasdaq has set its reference price at $250 a share.

Here, This is Money outlines the key points investors need to know about Coinbase, and its stock market launch and how UK-based investors will be able to trade its shares.

Big business: Founded in 2012, Coinbase is a cryptocurrency exchange company

Founded in 2012, Coinbase is a cryptocurrency exchange company. People can buy and trade digital currency like Bitcoin and Ethereum via its website. It is the biggest crypto platform in the US.

The company was founded by former Airbnb engineer Brian Armstrong and ex Goldman Sachs trader Fred Ehrsam and operates on a ‘remote-first’ basis, meaning it doesn’t have an official head office.

What’s happening and why does it matter?

Today is a big day for Coinbase and its fans. The company is gearing up to make its debut on the Nasdaq stock exchange in the US.

Crypto like Bitcoin has become big business over the past few years. This week the price of Bitcoin, traded on sites like Coinbase, hit an all-time high of $63,000.

The use of crypto like Bitcoin, while not without its critics, has become increasingly mainstream in recent years.

For instance, the asset is sitting on the balance sheet of the world’s biggest car company by market cap, Tesla, while parts of the City and Wall Street are increasingly embracing crypto assets.

Coinbase makes money by taking a small cut of the cryptocurrencies traded on its platform – and has seen a big rise in transactions in recent years.

With so much interest in crypto, Coinbase expects first quarter revenues of $1.8billion with net income of $730million to $800million, generated by around 56million verified users.

Coinbase takes a piece of every Bitcoin transaction on its platform. Last year, its revenues topped $1.28billion, 86 per cent of which came from those transaction fees, according to Forbes.

The group’s debut on the stock market will give investors who don’t want to, or for regulatory reasons, can’t, snap up crypto like Bitcoin ordinarily, a chance to get in on the action and see if they can make money from the sector.

Why is this listing different to an IPO?

Coinbase is going public with a direct listing on the US stock market. This is slightly different to a traditional initial public offering.

A direct listing means current owners of privately held shares in Coinbase will start selling them straight to buyers in the public market.

The usual order book build and underwriting of the deal by investment banks seen in IPOs has been forgone.

Is a direct listing a better option?

David Kimberley, an analyst at Freetrade, said: ‘An IPO normally involves a company selling its shares to investors for a fixed sum. Assuming they want to, those investors can then go to an exchange and start selling the shares they’ve just bought.

‘This often results in a massive price increase, called an “IPO pop”, meaning the investors who bought the shares from the company can then sell them at a substantially higher price than the one they just paid for them.

‘This naturally annoys a lot of companies, who feel they underpriced their shares and didn’t get all the money they could have.

‘Direct listings are supposed to be a remedy for this problem. Roblox and Palantir both used the method to go public and were well-rewarded for doing so.

‘But it doesn’t always work out. Spotify held a direct listing and saw its share price fall substantially on its first day of trading.’

On the question of how this could pan out for Coinbase, Kimberley, said: ‘It’s hard to say if this will happen to Coinbase. It may tank but then the company has seen lots of interest, so there’s a chance it will do well and hit those high valuation figures we’ve seen in the press.’ 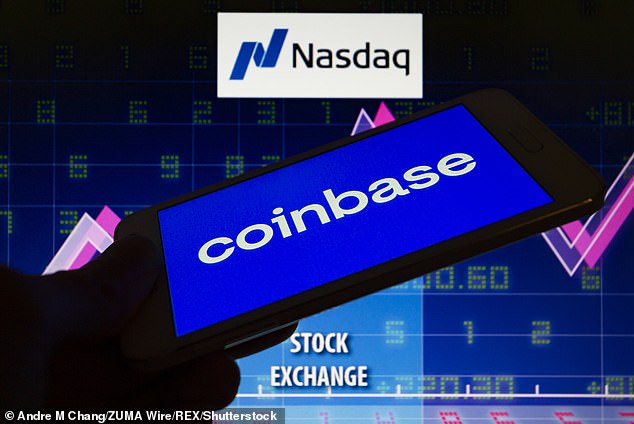 Valuation: Coinbase has an expected valuation of $100billion

What is Coinbase’s valuation?

Needless to say, Coinbase’s valuation is huge. Its been put at $100billion.

Kimberley, said: ‘By some estimates the company will hit a $100billion valuation once listed, although other reports indicate it could be substantially lower than this.

‘But if it does, it would make Coinbase one of the most valuable financial services businesses in the US — only $12billion behind Goldman Sachs.’

Anyone considering investing should be aware that this is a hefty valuation.

Analysts at MarketWatch said: ‘Coinbase’s expected valuation of $100billion implies that its revenue will be 1.5 times the combined 2020 revenues of two of the most established exchanges in the marketplace, Nasdaq Inc. and Intercontinental Exchange, the parent company of the New York Stock Exchange.

‘Our calculations suggest Coinbase’s valuation should be closer to $18.9 billion – an 81 per cent decrease from the $100billion expected valuation.’

How is it priced?

Nasdaq gave Coinbase a $250 per share reference price for its direct listing, which would value the business at around $65.3billion.

The reference price reflects past transactions and input from the investment bankers.

Can I buy shares as a UK investor?

Can I buy in is the question many UK-based investors will want to know the answer to.

Hargreaves Lansdown told This is Money that while there’s no retail IPO for Coinbase, its customers should be able to trade in the company’s shares on its platform from around 5.00pm BST.

Interactive Investor has said its customers will be able to trade Coinbase shares via its platform later today.

In theory, it should be just as easy to buy and sell shares listed on most developed, Western stock markets as it is domestic, London-listed ones. 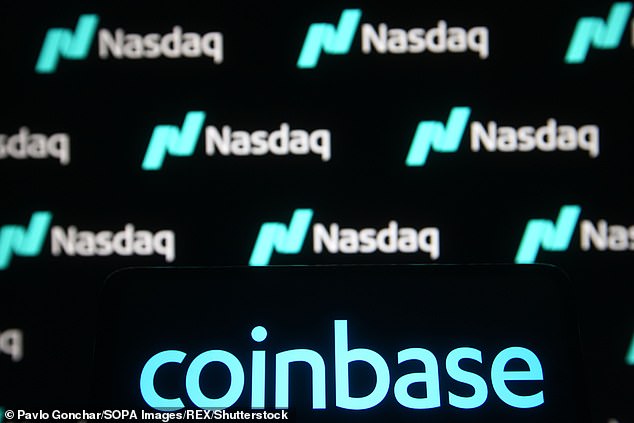 Listing: Nasdaq gave Coinbase a $250 per share reference price for its direct listing

The cost of placing an online trade can range from zero up to around £12 per transaction in liquid, developed markets.

As ever, investors need to consider dealing fees within the wider context of a platform’s overall charging structure and take into account product fees, administration charges and commissions on foreign exchange.

Investors will hope they’ll be no return of the scenes seen during the GameStop frenzy earlier this year, when some share trading platforms temporarily halted trading in the video game retailer’s shares.

What should I watch out for?

The world of crypto and investing can be highly volatile and when a company like Coinbase comes along and decides to debut on the stock market, it’s easy to get carried away.

But, there are some important issues to consider before taking the plunge and trading in Coinbase.

For a start, it’s not a typical equity investment because the company’s fortunes are heavily linked to nascent cryptocurrency markets, and comparisons for key things like earnings versus share price multiples are not available. 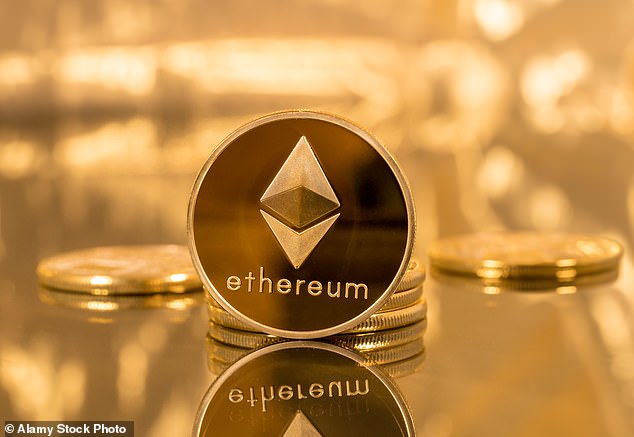 Be careful: There are some important issues to consider before taking the plunge and trading in Coinbase

Susannah Streeter, an analyst at Hargreaves Lansdown, said that while crypto and platforms like Coinbase look set to stay, their future is ‘far from certain.’

She added: ‘Bitcoin’s recent surge has come off the back of increased corporate and institutional interest, with more organisations as well as hard core fans appearing to have more confidence in the future of the currency.

‘But it’s still highly difficult to assess the right time to buy or sell because it’s so speculative and volatile. A lot of the demand has been from people hoping to benefit from future price rises rather than use bitcoin as a means of exchange.’

‘Investors also have to consider increasing regulatory risk. The UK’s regulatory authorities are clearly worried that the price volatility and product complexity of such assets places consumers at a high risk of losses.

‘Despite the endorsement of high profile individuals like Elon Musk and an increasing number of firms and financial institutions ploughing money in, investing in crypto-assets should only be under-taken within a well-diversified portfolio.’

Myron Jobson, personal finance campaigner, at Interactive Investor, said: ‘Cryptocurrencies are relatively new entrant to the investment universe and therefore has not built up enough of a track record for any meaningful conclusions on trends and behaviour to be drawn.

‘Whether Bitcoin and other coins will continue to outperform remains to be seen.

‘But whatever your approach to risk, cryptocurrency should only be a tiny proportion of a portfolio.’

Thinking about investing in Coinbase? 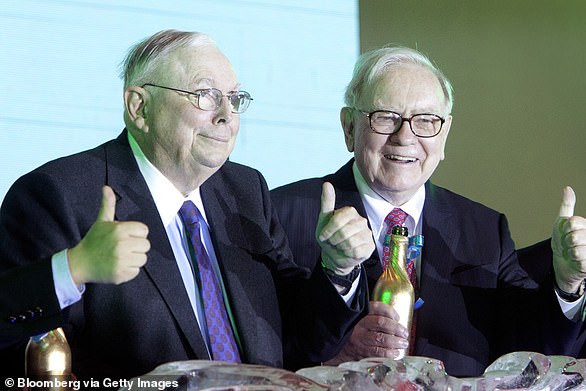 What would they do? Charlie Munger, left, and Warren Buffett, right

Russ Mould, investment director at AJ Bell, told MailOnline: ‘Warren Buffett’s long-term business partner Charlie Munger always asks four questions about a stock when he assesses it, whether it is a market newcomer or not.

‘Do investors understand the business model?; Does the business have intrinsic value (and a competition position which it can defend and develop, to ensure it can make good margins, profits and cash flow)?; Does management have integrity and are their interests aligned with those of shareholders?; Does the stock come at a fair valuation?

‘Most investors understand the fee and commission-based model and how that works, so Coinbase may tick the first two boxes for most investors – although there will be plenty who do not understand cryptocurrencies, who may therefore shy away.

‘The current financial statements look very good so it may tick the second box, too, although there are plenty of rivals including Kraken, Binance, Huobi and Gemini.’

He added: ‘Then we come to valuation. The suggested £73 billion price tag represents around twice the value of the London Stock Exchange, which has a longer history, a more diversified business model (especially after its move into data, further developed by the Refinitiv deal) and arguably faces less competition and less regulatory risk.

‘Central banks are developing their own digital currencies and may not be too keen on letting cryptos start to encroach too much upon their patch – a flick of the pen banning the purchase or acceptance of cryptos could change everything (and there are precedents, such as Executive Order 6102 in 1933, when America banned the hoarding of gold).

‘There is also the danger that retail investors and day traders get bored and move on to the next asset class as lockdowns ease and stimulus cheques stop.

‘Any unforeseen market turbulence could also leave such a lofty valuation exposed – and Bitcoin took just as much punishment as many other classes in the market rout of spring 2020, which knocked the theory about it being a useful diversifier and non-correlated asset.

‘Equally, those who see Bitcoin and cryptos as the future of money, or at least a store of wealth preservation at a time of rampant money creation to pay for the policies used to fight the pandemic and its effects, will dismiss such concerns and see the Coinbase listing as the latest step toward mass adoption.’