What would Liz Cambage say? Australian swimmers for Tokyo Olympics have one thing in common in photo

A promotional photo of Australia’s top swimmers and divers ahead of the Tokyo games may have unwittingly reignited debate about the racial diversity of athletes chosen to promote the Olympics.

But with the exception of diving champion Melissa Wu, 14 of the 15 athletes used by Speedo and the Australian Olympic Committee in the main photos are white. 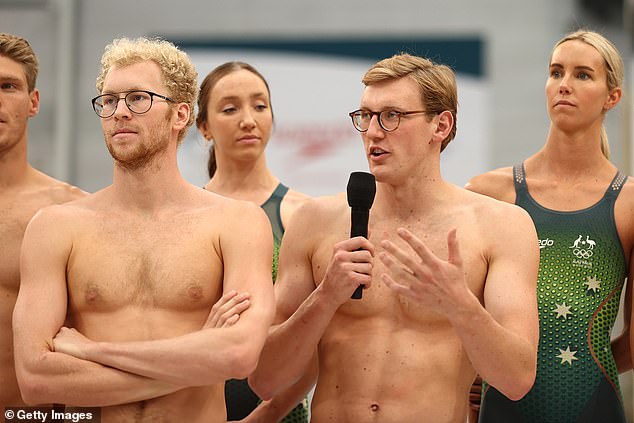 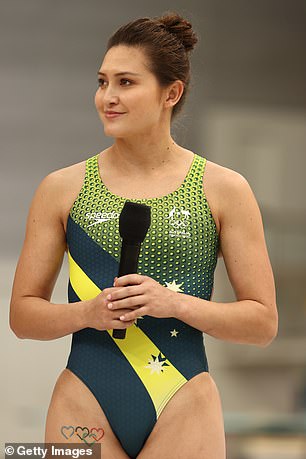 University of Technology Sydney academic Daryl Adair, who co-wrote a piece of research about the history of Indigenous female swimmers, said plenty of Australian sports are culturally diverse – but swimming wasn’t one of them.

‘Any sport that appears vanilla is going to be out of step with the multicultural nature of Australian society,’ he told Daily Mail Australia.

‘Swimming needs to be mandated in schools, but also encouraged as a core cultural capability for every Australian.’

It follows the fiery debate that has raged since star Indigenous Opal Liz Cambage criticized the AOC’s promotional photos.

Cambage initially threatened to boycott the Tokyo games over a perceived lack of racial diversity in the AOC photos.

She later backflipped and confirmed she would play in her third Olympics.

‘I’m going to play with my sisters that I’ve been playing with since I was a wee little thing and I’m going to ball out for all those young brown kids back in Australia watching me, baby. I’m going to do it for you,’ Cambage said.

Former NBA star Bogut was critical of Cambage’s stance in his podcast, to which she responded that he was ‘obsessed’ and joked that he fancied her.

‘Mr Bogut’s obsession with me (is) so strange, it’s been like 10 years of you speaking on my name… if you want me just say that,’ she wrote. 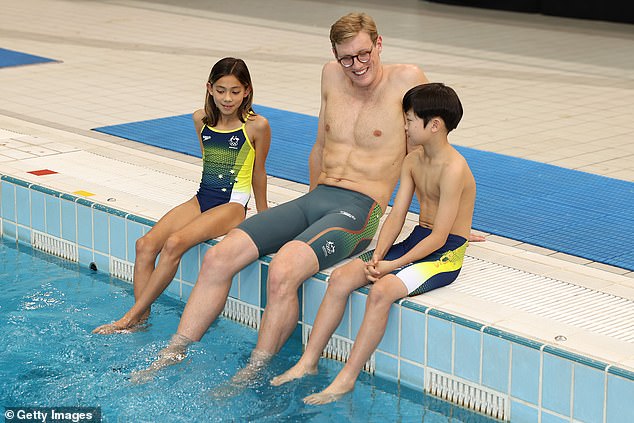 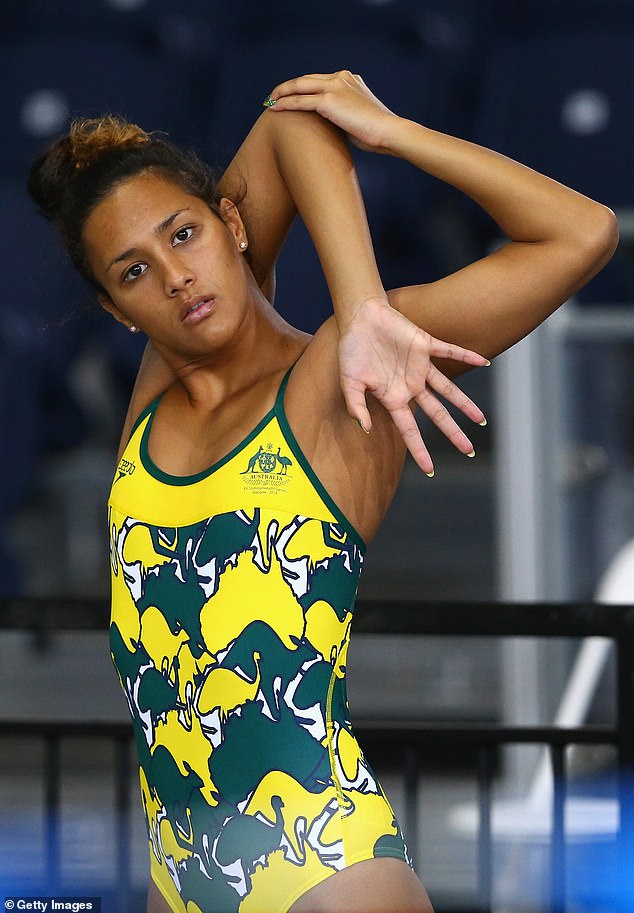 Melbourne-based Maori swimmer, Kotuku ‘Koti’ Ngawati, 26, a current member of the Australian Dolphins team, was not included in the Speedo shoot

She signed off with seven laughing and crying emojis, which Bogut used to troll her in a swift response.

‘Could you please not use all yellow emojis and use a more diverse range of emojis next time. Thanks!’ Bogut fired back.

Tennis great Todd Woodbridge also criticised Cambage, saying she had taken the wrong approach in standing up for her beliefs. 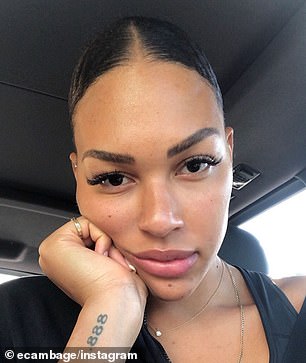 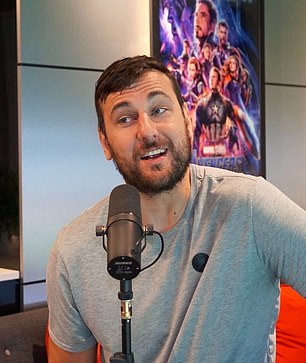 Paralympians were well represented in the new Speedo shoot, at least partly meeting Swimming Australia’s goals under its inclusion statement, that, ‘Australia’s diversity is reflected in swimming’. 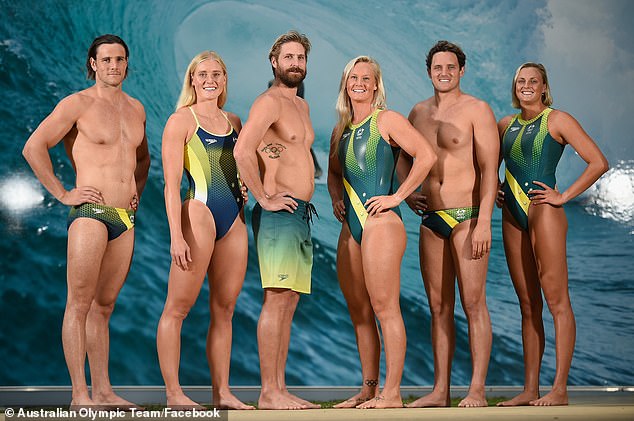 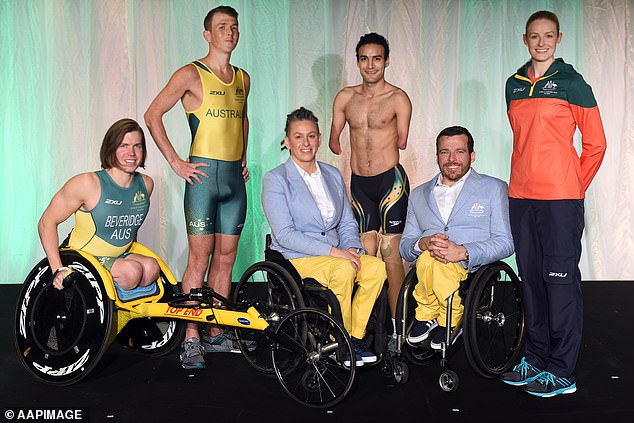 Ahmed Kelly (pictured third from right, beside Kurt Fearnly) in a 2016 image taken before the Rio Paralympics

When it came to representing ethnic diversity, the clothing brand did include juniors Indigo Chong and Bada Kang from the Sydney Olympic Park Aquatic Centre swim team in other photos that were shared on the AOC Facebook page.

But the showpiece images arguably reinforced Cambage’s complaints about a lack of ethnic diversity in the way Olympic sport is promoted in Australia.

There is no suggestion that Speedo, or the AOC prevented any elite athletes from non-white backgrounds from promoting their sports.

The reality is there were not many elite swimmers from ethnically diverse backgrounds that the label, or the AOC, could have chosen for the shoot.

Of the 92 elite swimmers listed on the Swimming Australia website as ‘Dolphins’ – the national squad – only three are widely known to be from non-white Australian backgrounds. 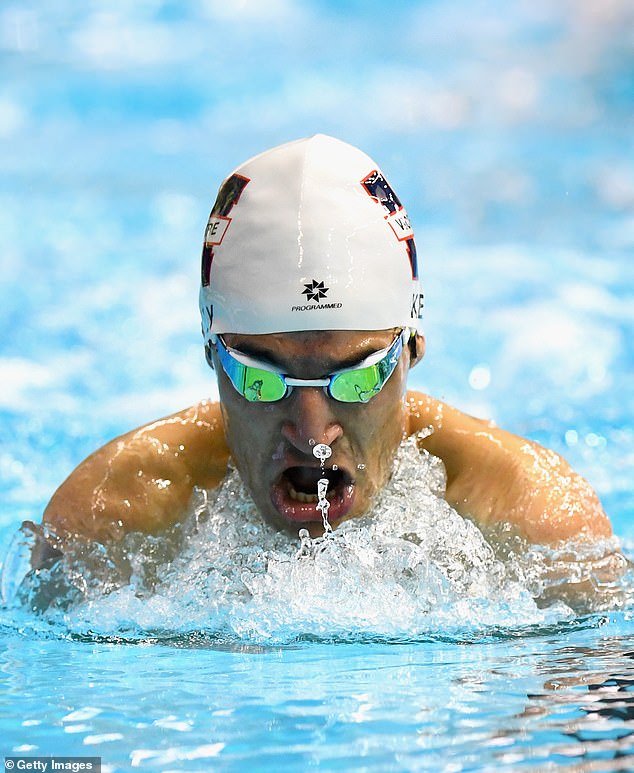 Baghdad-born Paralympian Ahmed Kelly, 29, a double amputee, is in the Australian Dolphins but also missed out on the Speedo photo shoot 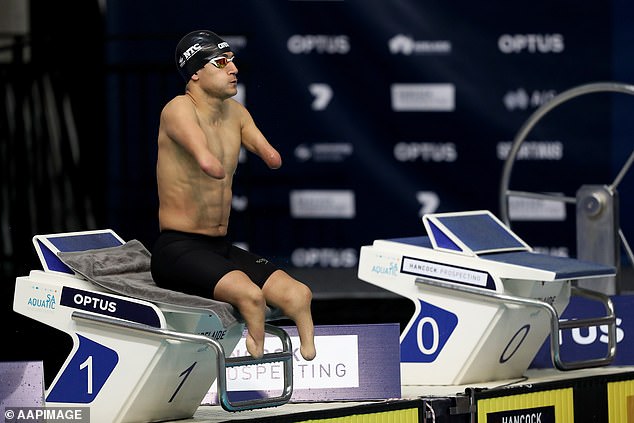 Ahmed Kelly, whose nickame is ‘Liquid Nails’, has an extraordinary story of overcoming tough odds

None of the three were picked to feature in the campaign.

Mr Kelly, whose nickame is ‘Liquid Nails’, has an extraordinary story. He was born with a double arm and leg deficiency and raised in a Baghdad orphanage with his brother Emmanuel, who had a similar disability.

He and Emmanuel were adopted by 2012 Victorian of the Year Moira Kelly in 2000.

In 2009 he was granted Australian citizenship and played Australian Rules football at 12 years of age – without prosthetics, although he does not have full arms.

The only Indigenous woman to compete swim at the Olympics for Australia was one of the very best – Samantha Riley.

She set a breaststroke world record in 1995 before a controversy over a banned headache tablet given to her by her coach derailed her 1996 Olympic campaign. 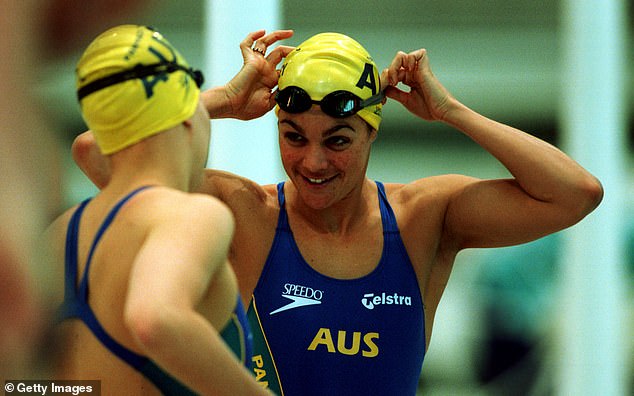 Riley, who learned to swim to reduce her childhood asthma, underperformed there in Athens, but still won a bronze in the 100m breaststroke.

Mr Adair said it was ‘a sad irony’ that Indigenous women often struggle to swim today.

‘They have lost their connection with the water and, perversely, now need (often white) swim instructors to learn something that was once normal to their culture.’

‘Swimming needs to be mandated in schools, but also encouraged as a core cultural capability for very Australian.

‘Drownings are still a significant problem in Australia, about which knowing how to swim is a fundamental protection.

‘And from a First Nations perspective, a higher proportion of indigenous than non-indigenous Australians typically drown each year.’