Kim Jong Un has left a lot of English speakers scratching their heads – and reaching for their dictionaries – when he slammed President Donald Trump as a ‘mentally deranged US dotard.’

The supreme leader dusted off the archaic Middle English term, which means a ‘senile old person’, while responding to Trump’s combative speech at the UN General Assembly on Tuesday, in which the president dubbed Kim ‘Rocket Man’ on a ‘suicide mission’ and vowed to ‘totally destroy’ North Korea if it continued threatening the US and its allies.

In a 500-word statement released on Friday by North Korea’s state news agency KCNA, which was written in the first person and brimming with outrage and indignation, Kim had a few choice words for his American counterpart, whom he labeled ‘a rogue and a gangster fond of playing with fire,’ likened him to a ‘frightened dog’ and suggested that he was unfit ‘to hold the precognitive to of supreme command of a country.’ 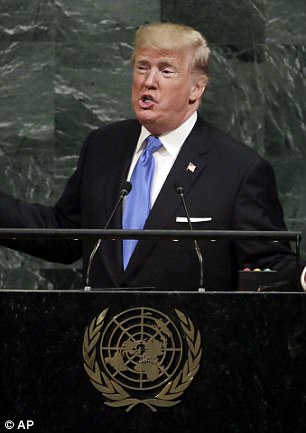 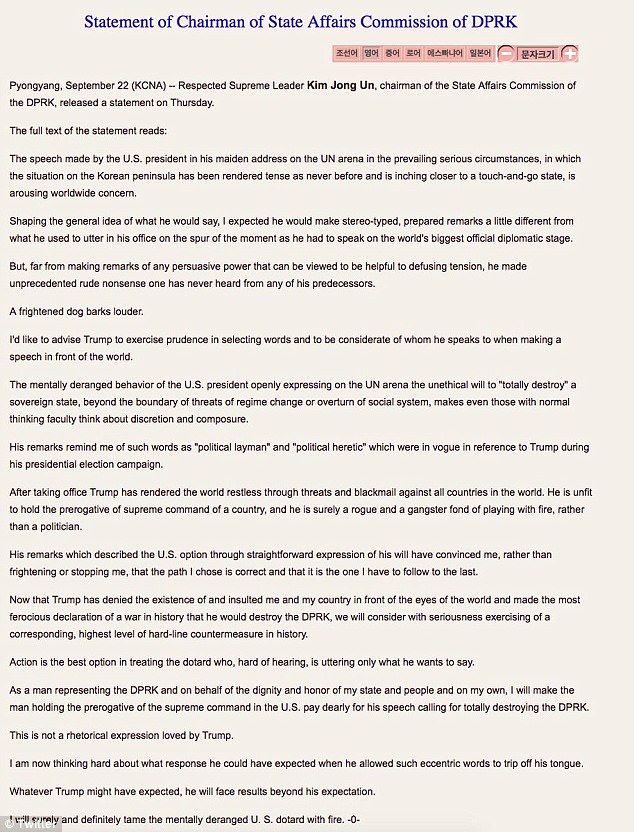 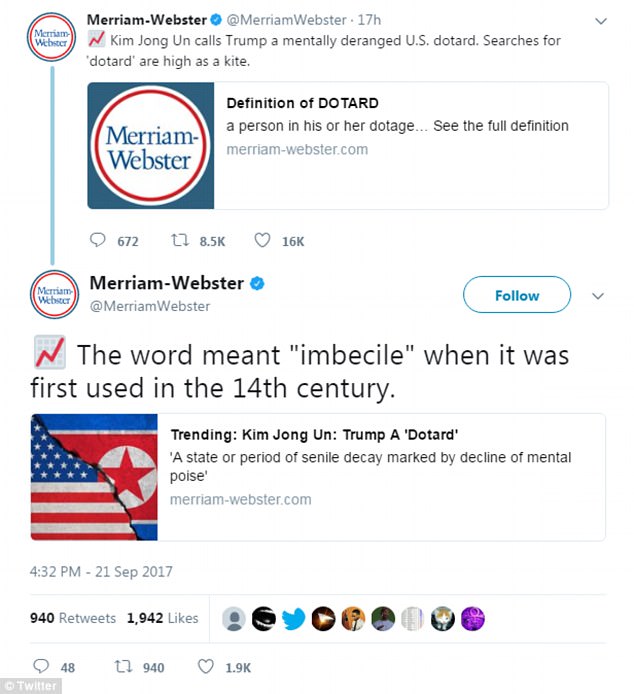 So what’s ‘dotard’ anyway? Merriam-Webster tweeted out that ‘dotard’ is a 14th century word meaning ‘imbecile’

But it was the ‘dotard’ reference that took social media by storm and sent people to reference books.

The obscure term traces its origins to the 14th century, and although Shakespeare and JRR Tolkien used it, it is barely heard these days.

In the original Korean version, which is often much bolder than the official KCNA English declarations, the ‘dotard’ quote can be more directly translated as calling Trump an ‘old lunatic’.

Observers joke that much of KCNA’s English seems to have been sourced with the help of an ancient dictionary.

It was not long before ‘#dotard’ began trending on Twitter and memes started popping up poking fun at the man on the receiving end of Kim’s antiquated burn.

The comedy website Funny Or Die tweeted out its own definition of ‘dotard,’ joking that it’s ‘a word you didn’t previously known existed, but googled today and said, “Damn, that’s pretty accurate.”‘

Another Twitter wit suggested that ‘dotard’ should be used as an epithet for Trump, akin to Alexander the Great or William the Conqueror. The tweet was accompanied by a photo of the president staring directly at the sun during last month’s solar eclipse without eye protection.

Among the tweets poking fun at the war of words unfolding between Kim and Trump, one took a page out of history books: ‘To My Kids: WWI: Started with the “Shot heard around the world”/WW2: Started when Germany invaded Poland/WW3: Started with #dotard’ 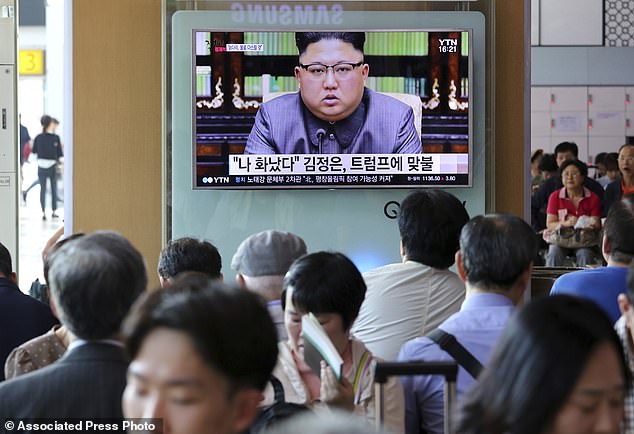 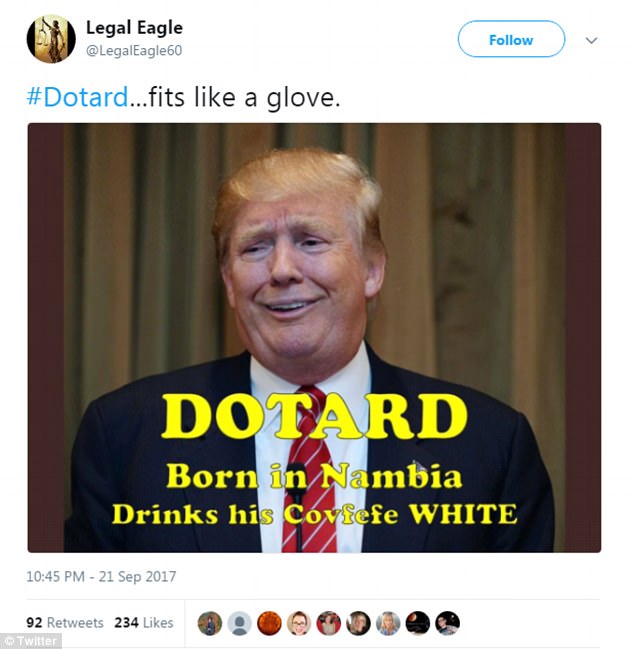 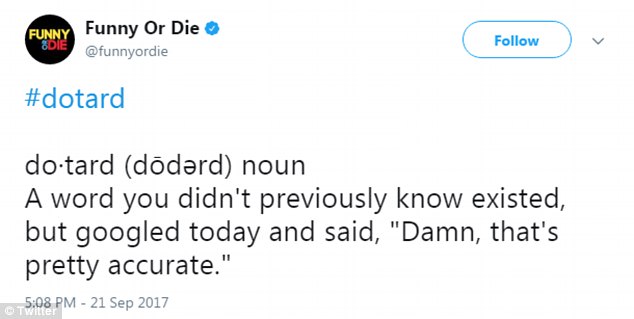 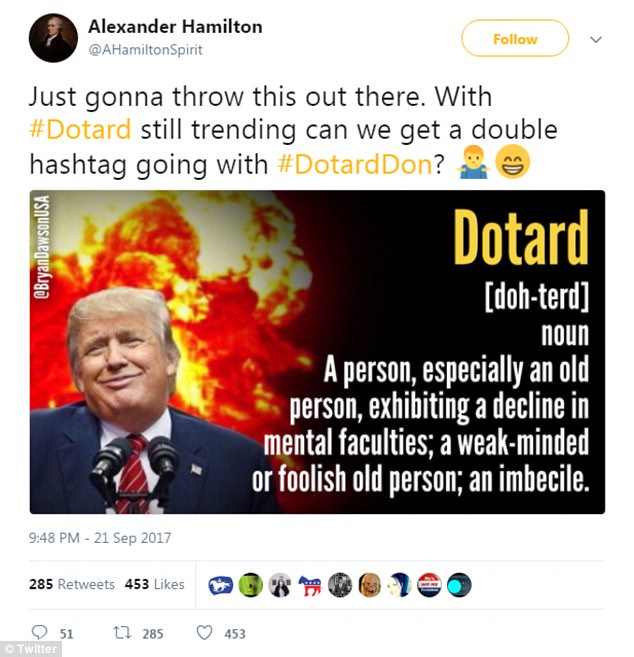 Kim Jong Un’s rhetorical flourish might seem like an outlandish tongue-lashing of the US leader, but it is rather tame compared to the florid language normally deployed by Pyongyang’s official Korean Central News Agency, which is peppered with flamboyant, imaginative and often antiquated language.

In 2013, about two years after Kim took power, he had his influential uncle and mentor, Jang Song-Thaek, executed for treason.

The official KCNA report of the execution called Jang ‘despicable human scum… who was worse than a dog’ and said he ‘perpetrated thrice-cursed acts of treachery in betrayal’ against Kim and the ruling party.

In 2014, while accusing her of being a ‘whore’ for Obama, it blasted her criticism of its weapons program as ‘froth(ing) at the mouth’.

Pyongyang had earlier likened her to a ‘peasant woman babbling to herself in the corner of her room.’ 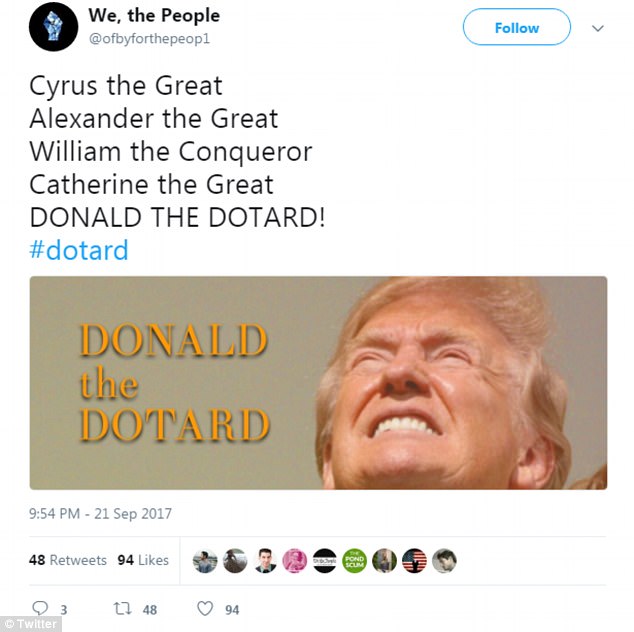 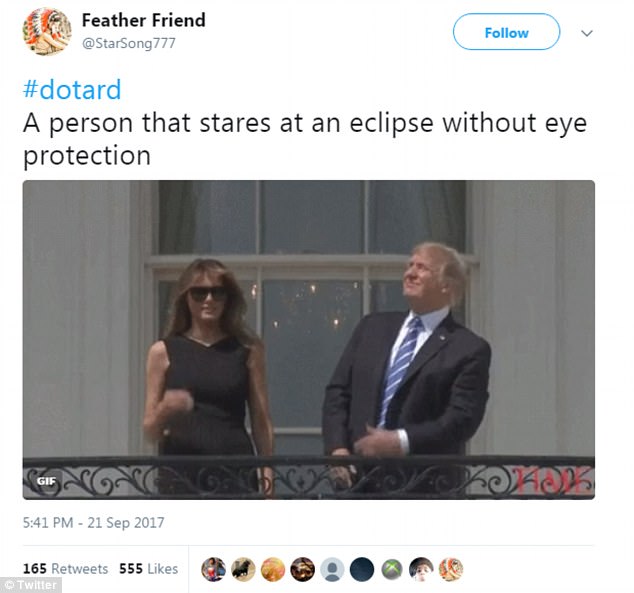 So well established is the state media’s reputation for over-the-top invective, one website nk-news.net has compiled a back catalog of some its most exquisite exhortations and hosts a satirical random insult generator.

But the lurid prose of the North’s media sometimes tiptoes towards poetry.

This week, the Minju Joson state newspaper railed against tough new penalties imposed on the country for its weapons program.

‘The US sanctions on the DPRK will prove futile and it will be just like sweeping the sea with (a) broom,’ it said.

Kim’s statement on Friday was unusual because it was written in the first person. North Korean state TV later showed a solemn-looking Kim, dressed in a gray Mao-style suit, reading the statement. South Korea’s government said it was the first direct address to the world by any North Korean leader.

The supreme leader said Trump’s remarks calling him ‘Rocket Man’ on a ‘suicide mission’ and threatening North Korea with destruction ‘have convinced me, rather than frightening or stopping me, that the path I chose is correct and that it is the one I have to follow to the last.’

Kim also said his country will consider the ‘highest level of hard-line countermeasure in history,’ a possible indication of more powerful weapons tests on the horizon, but didn’t elaborate.

North Korea’s foreign minister, asked on a visit to New York to attend the UN General Assembly what the countermeasure would be, said his country may test a hydrogen bomb in the Pacific Ocean.

‘I think it could be the most powerful detonation of an H-bomb in the Pacific,’ Ri Yong Ho said, according to South Korean TV. ‘We have no idea about what actions could be taken as it will be ordered by leader Kim Jong Un.’ 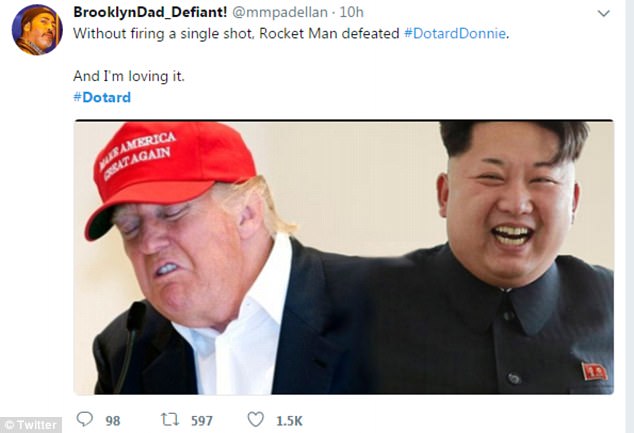