What’s life like for Saudi women? With devastating honesty, 28 of them give a piercing insight

Queens of the Kingdom

Do the women of Saudi Arabia feel like privileged, pampered princesses, or infantilised victims, controlled from birth to death by the whims of tyrannical men?

Is life getting any better for Saudi women since the driving ban was lifted in 2018? Could you or I bear to live there, even for a single day?

‘No’ is my firm answer to that third question, after reading this gripping, eye-opening book by Nicola Sutcliff, a writer who knows the country from the inside.

She taught at a women’s university there — a university surrounded by high walls and guarded by male security guards, from which no woman can ever go out unless accompanied by her male guardian — so a mother can never take her daughter out for lunch.

Sutcliff has interviewed 28 Saudi women from every walk of life, nearly all of whom have, at some point, been shouted at in a shopping mall by the religious police for not covering their faces properly.

‘Cover, cover, cover!’ is what you hear being barked all day long by the bearded religious prowlers in those malls.

As these women speak about their daily lives, you sense the overwhelming respect they’ve been brought up to feel for the Islamic traditions of their country.

In Saudi, the patriarchal family is sacrosanct. From the moment a girl menstruates, she is not allowed to fraternise with anyone of the opposite sex until the day of her marriage, which is usually an arranged one to someone she’s never met. You can even be jailed for having a cup of coffee with a boy.

These women revere and obey every word of the Koran — ‘It’s like a law book, a psychologist and a medical encyclopedia all in one,’ says one woman.

But, worryingly, and tellingly, they’ve asked to be anonymous in this book, to avoid getting into trouble from their male guardians for daring to make innocuous (but, actually, inflammatory) remarks, such as these:

‘If I’m honest, and my husband isn’t listening, I do miss the breeze on my face sometimes, especially in the evening.’

‘I hate wearing the niqab. You can smell your own breath in there.’

‘I’m always dreaming of renting a house on the coast, so my sisters and my girlfriends can take a little holiday. But I can’t because I don’t have a mahram [male guardian] to sign the papers.’

‘I think polygamy should be made illegal. It causes women to go into deep depressions.’

‘A woman’s guardian is her abuser. It’s a mechanism of control.’

‘I long to visit my son, who’s in the U.S., but my husband would have to sign the permission papers.’

‘Women here — we’re just used — for cooking, for cleaning, for bed. They’ve lowered us to nothing.’

On and on it goes: a catalogue of oppression, suppression and repression, voiced quietly among the bland reassurances of happiness. Saudi women are indoctrinated to believe that they’re far luckier than the unfortunate women in the West, who are sexualised from a young age, expected to earn their own living, and don’t have the ‘privilege’ of a male guardian to ‘protect’ them from the cradle to the grave.

Women are indeed allowed to drive in Saudi Arabia now, but there’s a seven-month waiting list for lessons, and most women have been so brainwashed into believing that if their car breaks down they’ll be sexually assaulted by the first man who passes by, that they prefer to keep their expensive driver.

Not that there aren’t some impressive pioneering career women here, as Sutcliff shows us. Women are now allowed to get jobs without their guardians’ permission.

We meet ‘Rana’, a fashion designer who designs abayas (the obligatory loose-fitting cloaks) and boasts, ‘Under my abaya, I wear clothes from designers all over the world!’

And ‘Mashael’, who’s started a women’s football team, in which all the members are self-taught, as there’s no sport in girls’ schools. And ‘Samira’, the first Saudi woman to graduate in engineering. As well as ‘Munirah’, a young newspaper journalist.

As these women chat about their amazing career success, they quietly slip in less palatable truths: Rana agreed to an arranged marriage, and says that if her husband dies young, she’ll be expected to ask her own son for permission to travel. From the age of 15, sons become their own mothers’ guardians if she doesn’t have a husband, father or brother.

‘But I would like people outside to know we’re very happy!’ Rana insists. ‘We have the great advantage of being looked after. Even if I earn a salary, I am under no obligation to support the household.’ (That’s the man’s job.)

Mashael lets slip that when she and her football team travel round the country to play matches, ‘we are very careful to move in small groups, to avoid abuse from the religious men at the airport’. And ‘our kit is all hidden under our abayas’. 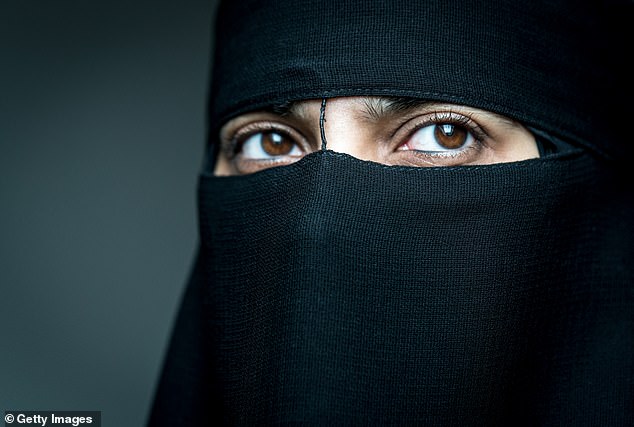 Sutcliff has interviewed 28 Saudi women from every walk of life, nearly all of whom have, at some point, been shouted at in a shopping mall by the religious police for not covering their faces properly. (stock photo)

And Munirah reveals that her brother was so ashamed when he saw her name in print for the first time that he held a gun to her head. She also admitted that she had recently turned down a longed-for opportunity to travel to the U.S., because her father and brothers refused to give her permission.

This desert country, Sutcliff suggests, has gone ‘straight from tent to penthouse’ so fast that society hasn’t had time to catch up. There are many weird anomalies: the flashingly modern co-existing with the cruelly medieval.

For example, as soon as girls walk through the door into their all-women universities, ‘cloaks and veils are discarded to reveal a rainbow of hairstyles, piercings, false lashes and designer handbags’.

The average Saudi woman spends $3,000 (£2,368) a year on cosmetics. Behind closed doors, in all-female company, they’re plastering themselves with make-up and are all addicted to YouTube and Snapchat: Saudis are the most prolific users of these in the world.

Yet if you’re caught having unlawful sexual intercourse, either before marriage or adulterously, you can expect to be sentenced to a year in prison and 100 lashes.

Having served your punishment, you can’t leave prison unless you’re collected by your male guardian — and he may be so ashamed of your behaviour that he won’t collect you and you’ll languish inside for years.

However, the 21st century is knocking at the door. The divorce rate has risen sharply — it’s up to 45 per cent — as women are waking up to the enlightened world they’ve seen on YouTube, and are refusing to stay with their abusive husbands (domestic abuse has at last been recognised as a crime), or to sit by as their husbands take on multiple wives (the legal limit is four).

‘The younger women are breaking the culture,’ says ‘Halla’, a 58-year-old doctor in Jeddah. ‘They do a lot of things we were never allowed to do . . . Change only comes about because every country cares about how other countries look at them.’

This book enables the outside world to look very closely indeed at how things are still done in Saudi Arabia.

Let’s hope that having the magnifying glass trained on it nudges things gently towards the first ever boy-and-girl Starbucks cup of coffee event in the kingdom.