Wheelchair users are forced to sit OUTSIDE revamped Starbucks cafés in London where seating has been replaced with trendy high tables – and one disabled woman was told ‘sorry, try another branch’

A disabled woman has expressed her anger at the design of two recently-revamped central London branches of Starbucks, saying the company is discriminating against wheelchair users by only having high tables in their interior.

Wheelchair-user Ann Webster, from Derbyshire, shared on Twitter an image of herself with one of the high tables, which come with high stools, in the St Pancras station branch of the global coffee chain.

The public servant wrote: ‘I went along to the refurbished Starbucks at St Pancras International and disabled people have indeed been banished to drink outside – no standard height tables inside at all.’

Wheelchair user Ann Webster, a public servant from Derbyshire, visited the newly renovated branch of Starbucks at St Pancras station and discovered that the coffee giant had removed all accessible seating in favour of high tables, with normal height tables placed outside the branch 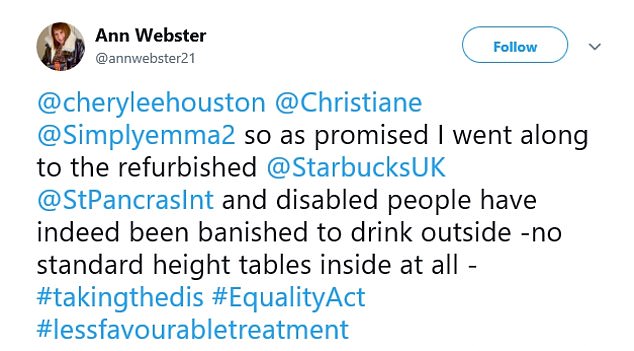 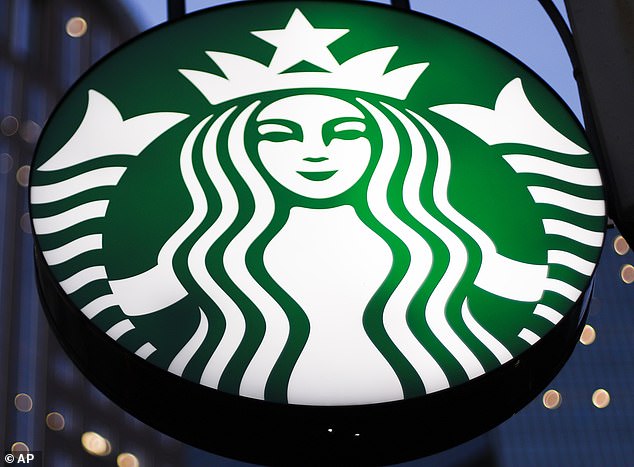 The St Pancras Starbucks branch, close to the Eurostar terminal in the London station and open 24 hours a day, underwent a renovation in 2019 and appears to have removed all accessible seating for disabled customers.

Webster followed up her tweet with another, which read: ‘They have the standard tables outside in the cold and the high ones inside – talk about less favourable treatment.’

She told MailOnline that the staff in store were ‘were lovely and so apologetic, but there was nothing they could do.’

However, more than a month on, she says the company has gone ‘silent’ on her after initially responding to her complaint to say that the ‘new and improved’ design of the store was designed to cater for the ‘take-away’ market.

A district manager for the company said while designers planned ‘thoughtfully’ to make the store easily accessible to all customers, it hadn’t been possible.

They wrote: ‘Unfortunately with this new lay-out we have tried to make adjustments where possible but on some occasions this has not been possible [SIC].’

Webster was then invited to enjoy ‘another branch’ instead.

Under the Equality Act of 2010, stores are required to take positive steps to remove the barriers people face because of a disability. Companies must ensure a disabled person receives the same services, as far as possible, as someone who’s not disabled.

After responding saying that the company was discriminating against disabled customers, she shared the correspondence on social media, sparking fury from others.

@Esther_Leighton wrote: ‘Such an awful reply. What bit of ‘anticipatory’ do they struggle to understand? A mixture of tables should have been provided.’

@MikScarlet added: ‘Go get them. There is no excuse. This refit took out sitting tables so removing accessible solutions.’

@EmmaisaChampion penned: ‘This is awful. I am very short, have hip, knee and back problems so climbing up to get onto one of those stools would be really difficult for me too. What about children? Babies in buggies?’

Webster told MailOnline that she had been alerted to the re-fit at Starbucks by another Twitter user, Christiane Link, who had already tweeted the company after discovering a similar situation at a London Bridge Starbucks store.

Link wrote: Oi @StarbucksUK, your newly refurbished store at St Pancras station has no wheelchair accessible tables inside anymore. Same at London Bridge. So disabled people sit in the cold or what’s your plan?’