When I played the beautiful game – in Biba high heels: BONNIE ESTRIDGE on life with Alzheimer’s

Is football good for The A-Word?

Is football good for The A-Word? The chaps from Tottenham Hotspur certainly seem to think so. They are working with the charity The Sporting Memories Foundation to provide dementia workshops – which they hope will show the Beautiful Game is as good for the mind as it is for the body.

People who go aren’t expected to actually play a match. Instead, they’re given access to Spurs memorabilia and allowed to look through the club’s archive of newspaper clippings, kit, cartoons and books.

The idea is that the items spark memories and conversations.

Sporting Memories actually works with clubs, large and small, across the UK – and their ethos is that everyone is welcome at the weekly events.

Sometimes, games are actually involved – it could be anything from curling (no idea how I’d manage with that, A-Word or not) or darts, to something called walking football, a slower-paced version of the game. The point of the events isn’t exercise, though, but to bring people together.

And I think it’s a brilliant idea.

Coincidentally, last week, my long-suffering husband Chris and I went to the dementia support group at St George’s Hospital, where I’m treated – and they had a sports quiz, which was almost all about football. 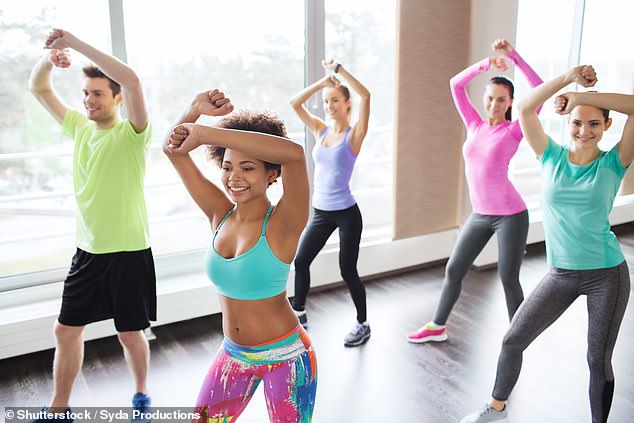 Although these days I’m likely to be found working up a sweat at my local Zumba class, I’m actually a closet football fan myself (stock image)

It was really fun – and if Tottenham’s workshops are anything like that, then they’re on to a winner, because, since the quiz, I’ve remembered all sorts of things myself.

You see, although these days I’m likely to be found working up a sweat at my local Zumba class, I’m actually a closet football fan myself.

In fact, I went to Wembley to watch England play in the 1966 World Cup. And my first taste of playing came – yes, I did! – when I was about 20, while working for Vanity Fair magazine.

I was in an all-women team for a charity match. Of course, there were photos taken. We were told to look ‘sexy’ – it was the unreconstructed early 1970s, after all. We all had our hair done, and I wore a wide-brimmed hat and bright red knee-high boots from Biba. I think they even had a heel. I’m not sure if I kept them on for the match – I probably did, knowing me. There were certainly no shin guards… they’d have ruined the look. And we had a terrific time. We may have looked girly but we swore like troopers – so loudly, I expect it could be heard for miles.

The only unpleasantness was that one of the girls, Rose, ended up with a very nasty knee injury. So that was her sports career over.

But I was a convert, and for a while I persuaded boyfriends to let me come along on a Saturday so I could have a kickabout.

But it doesn’t matter. If football is your thing, and you can get out and play, then do it – A Word or not. Anything physical makes the blood rush to your head. And that will stimulate the brain no end. Chris often says I’m sharper, and more with it when I come back from Zumba class.

Anyway, even though I’m not actually playing football myself, it’s been good to remember when I did. These old memories are our lives. They’re what make us – that’s why they’re important.

Share your experiences with Bonnie at bonnie.estridge@mailonsunday.co.uk or write to her at Health Desk, The Mail on Sunday, Northcliffe House, 2 Derry Street, London W8 5TT

In other news, earlier this month, it was my 68th birthday. My daughters, Suzy and Hannah, took me out – and booked a table at a very fancy, dog-friendly restaurant in Sloane Square, so Benny could come too.

And I’ll be seeing my old friends Sylvia and Hodge soon, too – readers might remember, we all went to the Isle of Wight festival together, many moons ago, to see Bob Dylan. We’d lost touch, but after they read this column, we met up again and now have plans to go to one of my old haunts, Joe Allen, the restaurant and theatre-bar in Covent Garden.

Chris and I spent many an evening there, drinking various tipples (not that I will be now, as I’m off the booze) and eating burgers. They’ve actually moved premises – but I’m told the vibe is very much the same. And I’m sure it’ll spark many more memories.