Where are the ‘Allo ‘Allo! stars now?

It was a comedy that coined a multitude of catchphrases that proved popular for decades and continue to raise a smile for people of a certain age.

As such, the news that ‘Allo ‘Allo actor Robin Parkinson, best known for playing Monsieur Ernest Leclerc, has died aged 92 has naturally saddened many fans.

Created by Jeremy Lloyd and David Croft, the show was aired on the BBC One for nine series and 85 episodes from 1982.

It was set in German-occupied France, in the northern town of Nouvion, and focused on cafe owner René who risked his neck to aid the resistance and stay out of trouble with the Nazis.

But what happened to the rest of the stars of the much-loved BBC comedy after it ended in 1992? 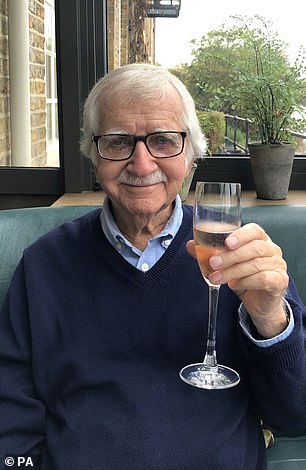 Robin Parkinson, known for his role in ‘Allo ‘Allo!, has died aged 92. The actor was a familiar face in the comedy world in the 1970s and 1980s, playing Monsieur Ernest Leclerc in the sitcom ‘Allo ‘Allo! from series seven (pictured left)

Robin Parkinson, who has died aged 92, was a familiar face in the comedy world in the 1970s and 1980s, playing Monsieur Ernest Leclerc in the sitcom ‘Allo ‘Allo! from series seven.

His career spanned more than four decades in film, theatre and television including a number of TV series such as Girls About Town, The Many Wives Of Patrick, The Young Ones and Rising Damp.

He also reprised his ‘Allo ‘Allo! role as Monsieur Ernest Leclerc for the West End stage version and tour of Australia in the 1990s.

He featured in theatrical productions, with his first professional appearance being in the Birmingham Repertory Theatre production of The Imperial Nightingale.

This was followed by performances at the Belgrade Theatre in Coventry and multiple West End productions.

Parkinson was also well known as the voice of children’s TV series Button Moon and for the 1980s TV adverts for Tunes and Babycham.

A statement issued on behalf of his family said: ‘Robin Parkinson, actor, known for ‘Allo ‘Allo and as the voice of Button Moon, has died peacefully at the age of 92 with his wife and daughters by his side.’ 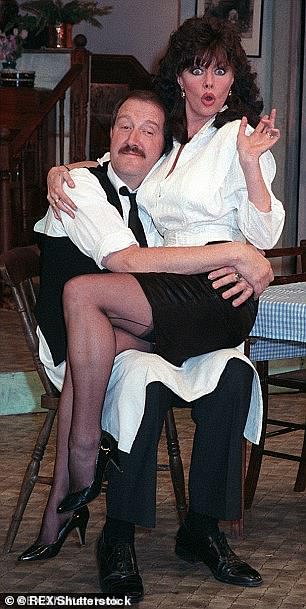 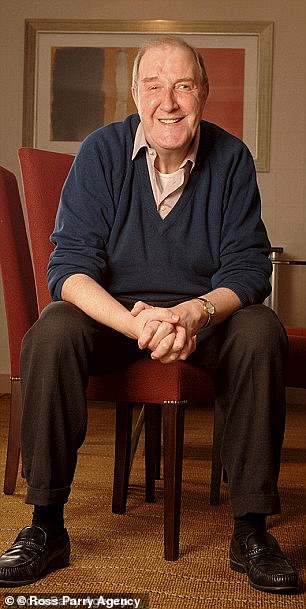 Gorden Kaye, left in ‘Allo ‘Allo! with Vicki Michelle as Yvette, died in his care home at the age of 75 in January 2017. Right, the BAFTA-nominated actor in 2006

As Rene, Gorden Kaye risked his neck to aid the resistance and stay out of trouble with the Nazis, with Carmen Silvera as his wife Edith, Richard Gibson as Gestapo officer Herr Flick and Officer Crabtree (Arthur Bostrom).

Kaye had rarely been seen onscreen following the end of the long-running BBC show, which he returned to in 1990 after he was seriously injured in a car accident.

He was left critically ill in hospital after a plank for an advertising board was blown through his car windscreen during the Burns’ Day storm in January of that year.

Kaye also starred in a successful stage version of ‘Allo ‘Allo! alongside the original cast, and later a new-look line-up, which frequently toured in the UK and internationally.

Before joining ‘Allo ‘Allo! Kaye starred in Coronation Street, playing Elsie Tanner’s nephew Bernard Butler on the soap from 1969 to 1970.

He also appeared in a number of shows including It Ain’t Half Hot Mum and Are You Being Served?

The actor’s last screen role was in BBC sketch show Revolver in 2004. He also appeared on an episode of game show, Family Fortunes, to win cash for charity.

He battled with dementia and sadly passed away aged 75 in January 2017. 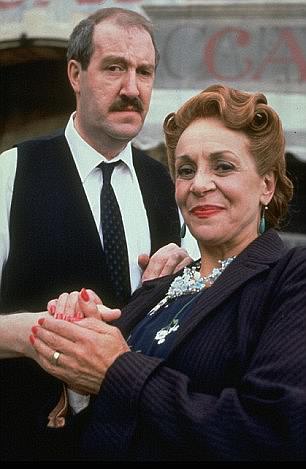 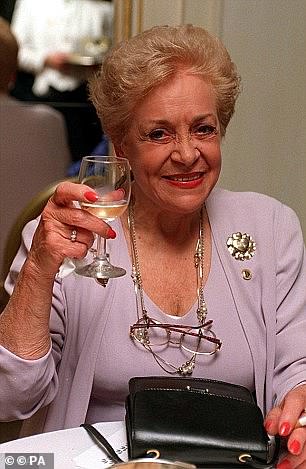 Born in Canada, Carmen Silvera moved to Coventry as a child. She appeared in a string of television shows before joining the cast of ‘Allo ‘Allo!.

The actress played the antagonistic wife of cafe-owner Rene throughout the comedy’s airing.

Following her work in ‘Allo ‘Allo, she continued her stage career, starring in a production of That’s Showbiz.

She also appeared in Waters Of The Moon, A Coat Of Varnish and School For Wives, on the West End.

The actress continued to work up until 2001, touring the country in the comedy You Only Live Twice.

The following year she was diagnosed with lung cancer. She died in August 2002, aged 80.

Co-star Kaye Gorden, who played her husband in the BBC sitcom, visited her west London retirement home just days before she died. 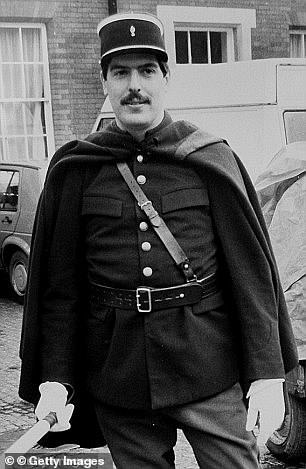 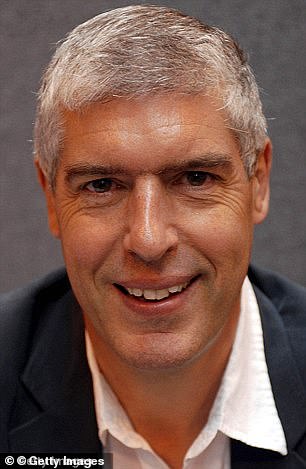 Arthur Bostrom, right in 2006, has a much better command of the French than his character Officer Crabtree, left. The actor has appeared on a number of TV shows

Durham University graduate Arthur Bostrom, 67, trained for the theatre at the Drama Studio London before joining the cast of ‘Allo ‘Allo!

His character first appeared mid-way through the second series and remaining until the show’s finale.

While much of Officer Crabtree’s humour was based on his mispronunciation of English words – his mangled vowels led him to adopt the greeting: ‘Good moaning’ – Bostrom speaks fluent French.

Since leaving the show he has returned to TV on Miss Marple: The Body in the Library, Return to Treasure Island and 99-1.

He has also appeared in a number of plays and radio programmes, including the BBC dramatisation of The Good Soldier Švejk by Jaroslav Hašek alongside ‘Allo ‘Allo! co-star Sam Kelly.

In 2005, he performed in audio drama Dead Man Walking, joined a Cinderella pantomime as an Ugly Sister in 2007 and has played numerous roles in BBC soap opera Doctors.

He appeared on a celebrity edition of Pointless in 2017. 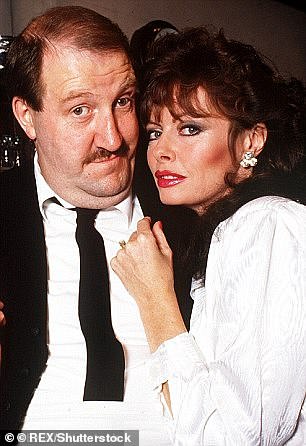 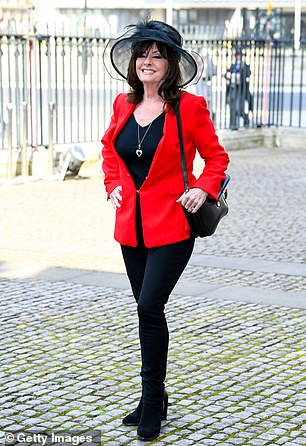 Since leaving ‘Allo ‘Allo! (left), Vicki Michelle (pictured right in March 2022) , 71, has appeared in a number of television programmes, including Doctors and Emmerdale

Since leaving ‘Allo ‘Allo!, Vicki Michelle, 71, has appeared in a number of television programmes, including Doctors and Emmerdale.

She played Jonny Foster’s mother Patricia in the Yorkshire soap and returned for two episodes in 2009.

The actress has also enjoyed roles in a string of plays and starred in feature films including The Callback Queen, Silent Hours and No reasons.

She also joined the ‘Allo ‘Allo tour and in 2014, she joined the cast of Hello, Norma Jeane as she returned to the London stage.

In 2010 Michelle was awarded an MBE for her services to charity. The actress starred in the 2014 series of I’m A Celebrity… Get Me Out Of Here!

In 2016, the veteran star made headlines when she criticised British producers for always casting the same small group of performers in leading roles. 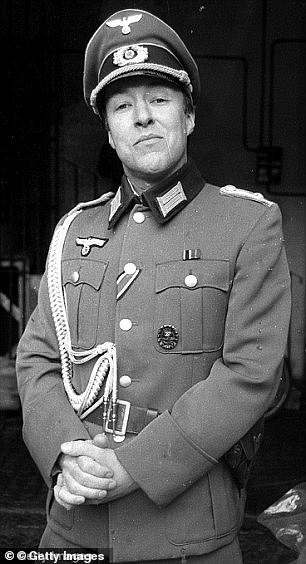 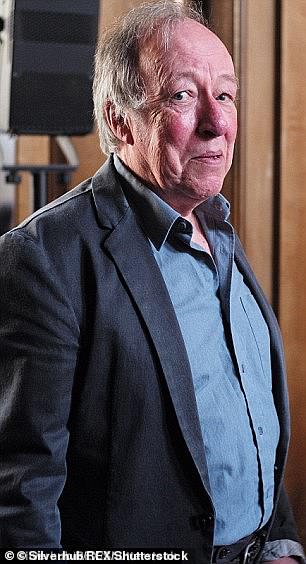 American-born actor Guy Siner, left as Lieutenant Hubert Gruber in ‘Allo ‘Allo!, had a role in Pirates of the Caribbean: The Curse of the Black Pearl. Right, in 2015

Guy Siner, 74, was born in Manhattan to an American father and an English mother.

After ‘Allo ‘Allo! Siner appeared in television programmes such as ChuckleVision, Doctors and Diagnosis Murder.

Siner’s film credits include Pirates of the Caribbean: The Curse of the Black Pearl and Return to the Secret Garden.

He has also lent his voice to a number of computer games and animated TV series.

Siner is distinguished as one of only 10 actors to appear in both the Doctor Who and Star Trek franchises. 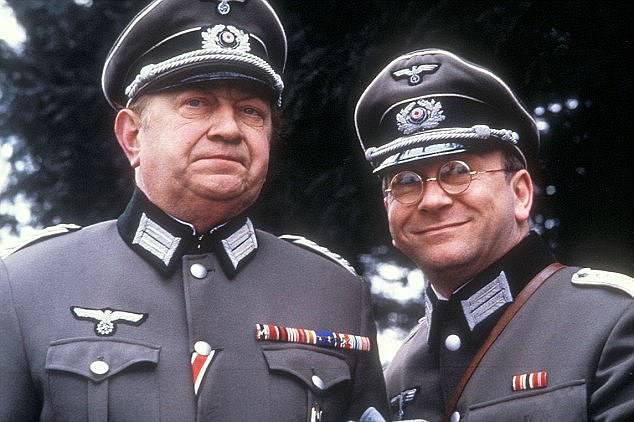 Russian-born Richard Marner joined the cast of the BBC series about the French resistance at its inception in 1982 after an illustrious film career.

Marner appeared alongside Humphrey Bogart and Katharine Hepburn in 1951’s The African Queen.

His other movie credits included Reach For The Sky, You Only Live Twice and Ice Cold In Alex.

Marner died in Scotland in March 2004, aged 82. His last role before his death was 2002 film, The Sum of All Fears, starring Ben Affleck and Morgan Freeman. 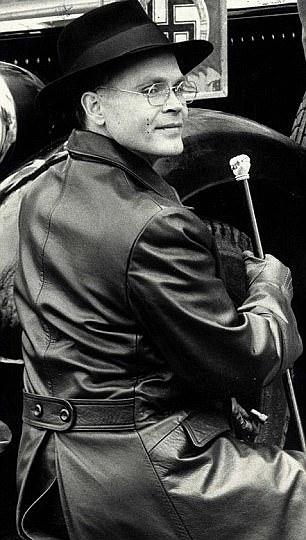 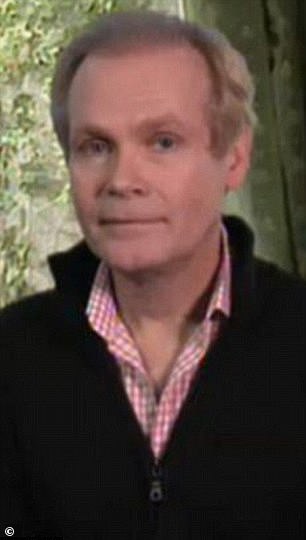 Richard Gibson as Herr Otto Flick, left, and in a 2017 TV appearance, right. The actor has spent much of his career on stage and has also worked as a voice over artist

Trained at the Central School of Speech and Drama, Richard Gibson appeared in The Children of the New Forest, Poldark and Park Ranger before landing the role as the much-despised Gestapo officer Herr Flick in ‘Allo ‘Allo!

He reportedly came to the attention of co-creator David Croft while telling jokes with a German accent at his daughter’s wedding.

Gibson, 68, left the show after eight series in 1992 and David Janson took over the role in the final season.

Much of his career since the show has been on stage but he has also appeared in TV mini-series Trade Winds.

He has also worked as a voice over artist; in 2003, he guest-starred in the Doctor Who audio show Flip-Flop,

Born in Uganda, Gibson is married to wife Kate and has two sons. 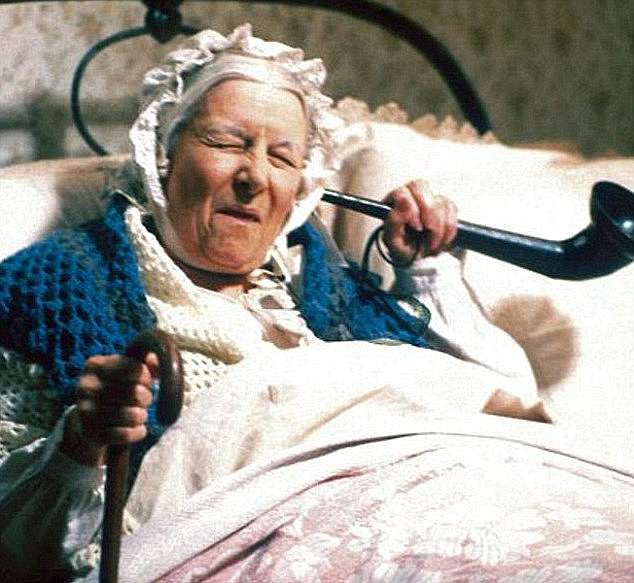 Trained as an opera singer, actress Rose Hill was almost 70 when she started playing Madame Fanny Le Fan, the adoptive mother of Edith Artois, on ‘Allo ‘Allo! in 1982 (pictured)

Trained as an opera singer, actress Rose Hill was almost 70 when she started playing Madame Fanny Le Fan, the adoptive mother of Edith Artois, on ‘Allo ‘Allo! in 1982.

She remained for the show’s 10-year run.

After ‘Allo ‘Allo! Hill went on to have roles on A Touch of Frost and The Bill but much of her career took place before.

Hill spent her final years in Denville Hall, a retirement home for actors, until her death in December 2003 at the age of 89.

She was married to John St Leger Davis until his death in 1985. 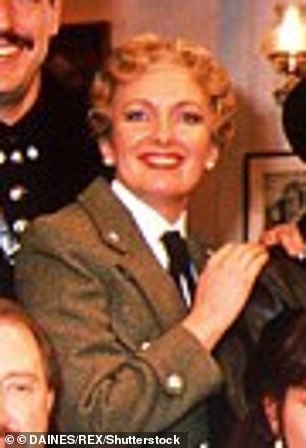 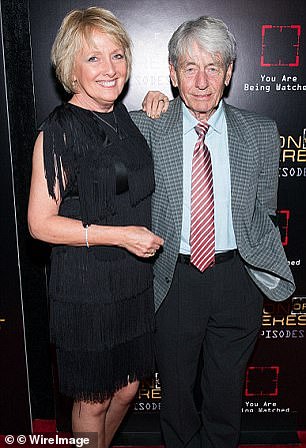 Kim Hartman, left in ‘Allo ‘Allo!, has starred in a number of TV shows. Right, with husband John Nolan at a New York premiere in 2015

The actress also played Mrs Rawlinson on hit programme Grange Hill between 2005 and 2008.

The actress has been married to husband John Nolan since 1975. Nolan is the uncle of directing-screenwriting duo Christopher and Jonathan Nolan. 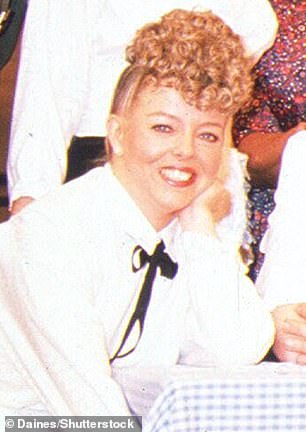 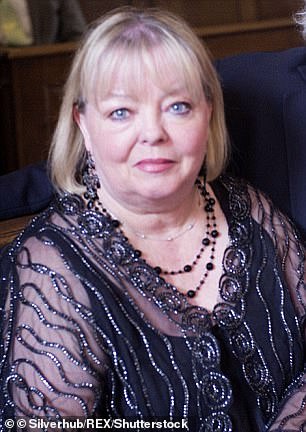 Much of the actress’ career before and after ‘Allo ‘Allo! has been on stage, both in the UK and around the world.

In 2017, Hodge starred as Nurse Mimi in the Haverhill Arts Centre production of the pantomime ‘Robin Hood’.

In 2009 Hodge returned to television as Connie in BBC3 sitcom The Lads Club.

She toured in her one woman show Mimi and Me (‘Allo Again) and wrote a book Mimi’s Memoirs, which takes readers behind the scenes of ‘Allo ‘Allo. 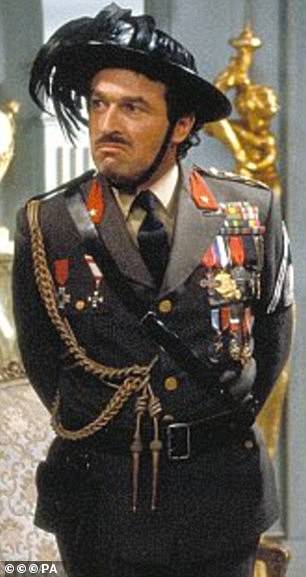 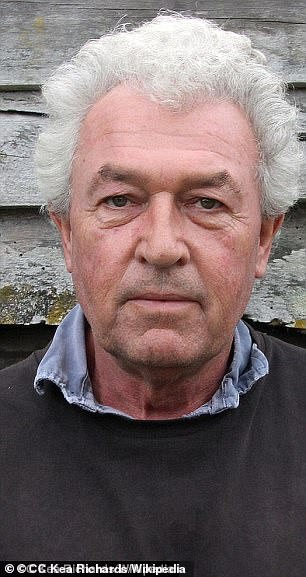 Gavin Richards appeared as Captain Alberto Bertorelli, left, in more than 30 episodes of ‘Allo ‘Allo! between 1987 and 1989. Right, Richards in 2014

He went on to have roles in Kinsey, Mike & Angelo and Coronation Street, but is perhaps best known for his portrayal of Terry Raymond in EastEnders from 1996 to 2002.

As a theatre director and actor, Richards is known for adapting the work of Italian playwright Dario Fo into English.

He was nominated for an Olivier Award for his 1980 production of the playwright’s Accidental Death of an Anarchist.

Richards, who also co-founded a theatre company in New Zealand with wife Tamara Henry, also had his book of poetry published in 2015.