Where did Scott Morrison’s ScoMo nickname come from

But where the nickname originated from remains the subject of much conjecture.

Twitter was abuzz this week as journalists laid claim to coining ‘ScoMo’.

Mr Morrison for his part has embraced the moniker, to the point where his Facebook profile even mentions the nickname.

Back in January 2017 when Ray Hadley introduced Mr Morrison on his 2GB radio program, he said ‘should I say ScoMo’.

‘That’s what I’ve been tagged as so I may as well embrace it,’ Mr Morrison said.

‘That’s how people are increasingly getting to know me, so I’m happy to take the nickname,’ Mr Morrison said.

About 18 months earlier, Mr Morrison had appeared on the same radio station, where he was interviewed by Ben Fordham. 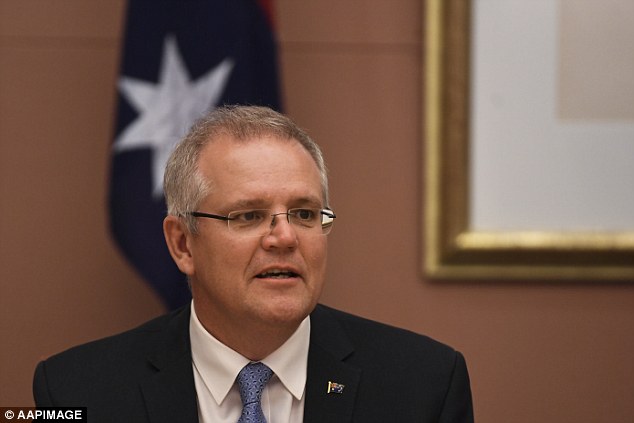 Mr Morrison (pictured) said he when he was a youngster, he had the nickname ‘Scotty Mo’

Mr Fordham had said to Mr Morrison at the end of the interview: ‘Before I let you go we are talking nicknames this afternoon and we have got a bit of a challenge running. You picked up one recently which is Scott Morrison being shortened down to…’.

‘ScoMo. These things I think Ben you just – you don’t get much say over these things, you just embrace them,’ Mr Morrison responded.

When asked if he previously had any other nicknames, Mr Morrison said he had.

‘When I was a kid I was known as Scotty Mo so I suppose – because my best mate was Scott Merryman and he was called Scotty Me. So it was Scotty Me and Scotty Mo,’ he said. 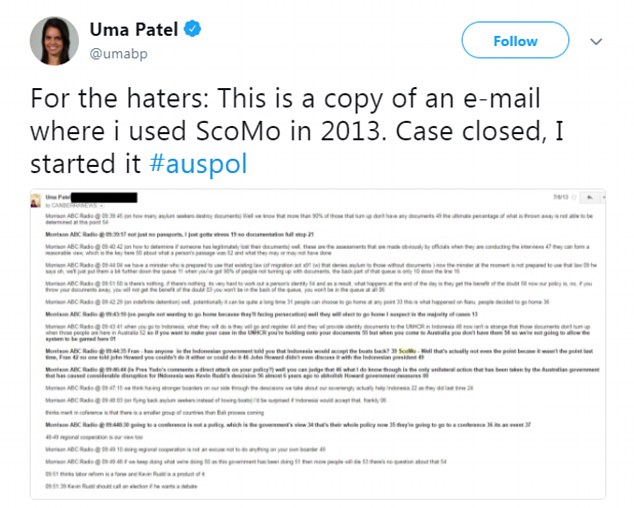 Journalist Uma Patel said she used ‘ScoMo’ in 2013, posting a copy of an email to Twitter to back-up her claims

‘Actually while I can claim to be the first to use it in print, I nicked it from Phillip Coorey’s singsong utterances in the office. ScooooooMoooooo,’ she posted on Twitter.

Uma Patel, a former journalist with the ABC and Sky News, now living in Berlin, said she first coined the phrase ‘ScoMo’ in 2013 and posted a copy of an email to back-up her claims.

She later said: ‘I obviously expect royalties from any ScoMo related memorabilia’.

The nickname was also referenced in a tweet from the now shut-down political website, Vexnews, which was run by Andrew Landeryou, back in December 2011.