Where is the best bet for a foreign holiday this summer?

Millions of lockdown-weary Britons are waiting with baited breath for ministers to reveal their ‘green list’ of countries ahead of holidays resuming from May 17.

The Government is expected to unveil its traffic light system on May 7, when destinations will be categorised by varying degrees of quarantine restrictions.

Those awarded green list status, where returning travellers will not have to self-isolate, will automatically become prime getaway locations.

But despite craving tourists to revive their flagging economy, typical British favourites such as France and Spain could be set to miss out.

Portugal could also be a rare European addition to the green list after wrestling cases right down.

Vaccine passports have been hailed as key to unlocking foreign travel this summer, with many countries ready to welcome people who’ve had both doses without tests.

Yet it is the toughened UK self-isolation restrictions facing returning holidaymakers that will likely sway their choice of destination.

One Government source said: ‘You’ve got countries saying we will welcome you. But it depends what the precautions on return are.

‘We will have that green, amber, red system. It is about what you face when you come back to the UK…. Can you isolate for 10 days?’

Below MailOnline drills down into the countries that are likely to receive green status – and the holidaymaker favourites that will likely be overlooked.

Portugal is steadily resuming normal life after weeks of restrictions has successfully brought cases right down.

In January the country locked down in the jaws of then the world’s worst surge in cases that at its peak saw 12,000 people – of its 10million population – catching the virus at day.

Daily cases have now plateaued at around 500 – 47 per million – while deaths are in single digits.

A fifth of the population has now also been vaccinated, and the most vulnerable seven per cent have received both doses.

Restaurants, museums, shops, gyms and malls have all now reopened after months starved of income.

Such a hit to the economy means Portugal is enthusiastic about welcoming back British tourists, who typically flock to the Algarve by the thousands each summer.

Tourism minister Rita Marquez said she looked forward to Britons flying over from May 17, provided they show proof they’ve been vaccinated or have tested negative.

She told the Today programme: ‘We hope to welcome all British holidaymakers from May 17.

‘Holidaymakers can present to Portuguese authorities a certification that testifies they are vaccinated or have immunisation to the virus of they have a negative Covid test. It will be very straightforward process.’

Last month the country was removed from the red list, which was greeted by Portuguese officials.

Tui is currently advertising package holidays to a host of seaside resorts in the Algarve from as early as May 17.

Portugal is enthusiastic about welcoming back British tourists, who typically flock to the Algarve by the thousands each summer (Alvor beach pictured)

The United Arab Emirates is one of the world leading countries by vaccination rates, having jabbed more than half of its population.

Cases are also declining and daily deaths – which have been kept remarkably low, totalling 1,561 during the entire pandemic – have dropped to an average of around three per day.

Dubai, the UAE’s biggest city, is expected to allow British tourists to return when they are given the green light to travel from the UK government, given how relaxed it was about Love Island influences flying there during the winter wave.

In February Dubai closed all bars, clubs and lounges for a month to tackle a spike in cases, but they have since reopened.

The city has been open for tourists since July 2020, with visitors required to take a PCR test 72 hours before arrival, and again on arrival in Dubai.

Industry chiefs are confident British tourists will be able to book holidays in the gulf shortly.

Paul Griffiths, CEO of Dubai Airports, told an event last month: ‘The progress that’s being made in the US, Israel (and) the UK gives us hope that life will start to assume some sort of normality.

‘I think there are some strong indications that over the next few weeks, things will move very quickly.’

Paul Charles, chief executive of the PC Travel Agency, reckons Dubai will be open for travel by July 31, along with neighboring Doha and Abu Dhabi. 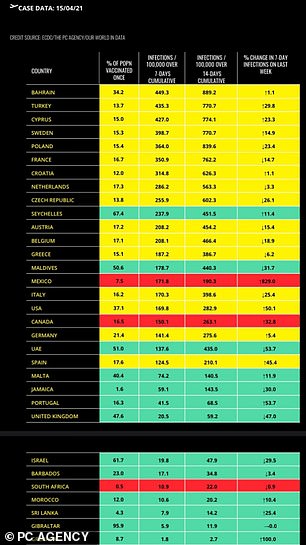 All the numbers are trending in the right direction Malta, paving the way for summer holidays in one of the Queen and the late Prince Philip’s treasured island bolthole.

The archipelago with a population of only half a million people has indicated it will allow fully vaccinated Britons to fly there from June 1.

A negative PCR test certificate 72 hours prior to, or on arrival, is also likely to be accepteable.

Last month Malta Tourism Authority UK and Ireland director Tolene Van Der Merwe said: ‘Malta is a very popular destination for British holidaymakers and is a key contributor to Malta’s economy, so we are excited to welcome back fully vaccinated travellers from the United Kingdom from 1 June 2021.

‘The people of Malta are looking forward to tourists returning who have loved our sunshine, culture, food and warm spirit year in year out.

‘Malta has implemented its ‘Sunny and Safe’ Covid protocols, so visitors can be reassured that all restaurants, accommodation and service providers must comply with the highest levels of cleanliness and safety.’

And Malta’s tourism and consumer protection minister Clayton Bartolo added: ‘The health and safety of Maltese citizens and tourists will always be our top priority, and with the continued rollout of the vaccine here in Malta, this focused reopening plan is designed to slowly and safely reopen tourism to fully vaccinated Britons.’

Stringent rules for overseas arrivals have helped keep overall cases below 4,000 in Barbados.

But from May 8 restrictions will be eased for visitors to the Caribbean holiday favourite with both doses of Covid vaccines.

They will still have to provide proof of a negative Covid-19 PCR test result three days prior to travel, a vaccination certificate, and have a PCR test completed at arrival at the airport.

However they will not have to spend at least five days self-isolating in approved accommodation, as per non-vaccinated tourists.

Barbados Tourism Marketing said these measures ‘are likely to change’ as the pandemic wanes.

But Such strict measures could deter holidaymakers who have not had both doses.

Nevertheless, an infection rate of just 2.6 per 100,000 should see Barbados make the green list.

Moreover Barbados has had a successful vaccine programme, with nearly a quarter of the population having received a first dose of the AstraZeneca jab.

With a tiny island population of less than 100,000, the Seychelles have strode ahead with vaccinations and jabbed more than two-thirds of its citizens.

Currently there are an average 54 cases a day on the island, and the country has not recorded any deaths in some days.

It’s small population means that its cases per 100,000 can appear worrying, but that’s because just a handful of cases can have a sizeable shift in the numbers.

Last month the Seychelles opened its borders for tourists, with foreign affairs and tourism minister Sylvestre Radegonde citing the country’s ‘aggressive’ inoculation drive as the key to unlocking.

He said: ‘Our borders further is the next step to allow for our economic recovery. The measures being announced reflect broadly the recommendation of our tourism partners and have been done in full consultation with and the endorsement of our health authorities.’

The Seychelles boasts some of the world’s most idyllic beauty spots, with golden sands and clear blue seas. 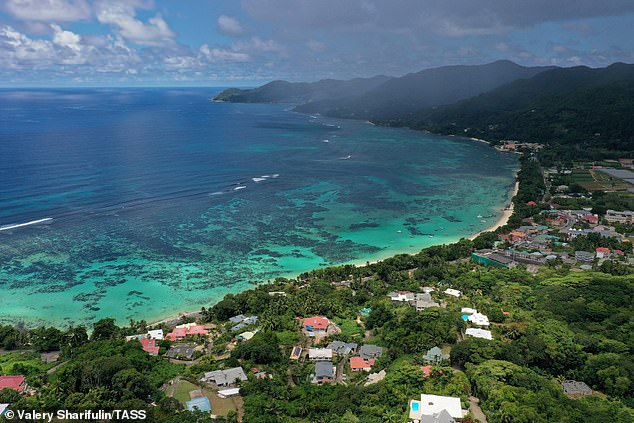 The Seychelles boasts some of the world’s most idyllic beauty spots, with golden sands and clear blue seas

Holiday favourites that hang in the balance…

After falling foul of the EU’s bungled jab rollout – and President Macron’s scepticism of the AstraZeneca vaccine – France is now making headway and has nearly inoculated a fifth of its population.

Like much of Europe it recently grappled with a devastating third wave, and although it appears to be past the peak, it is unlikely to make the UK’s green list at first.

Paul Charles predicts it will be on the amber list under the UK’s traffic light system.

It means travellers would require proof of a negative PCR test before arriving in Britain, take two further tests after returning and undergo a 10-day quarantine at home.

While this could pave the way for cross-Channel getaways, Macron this week appeared to suggest millions of vaccinated UK holidaymakers could be prevented from visiting France this summer. 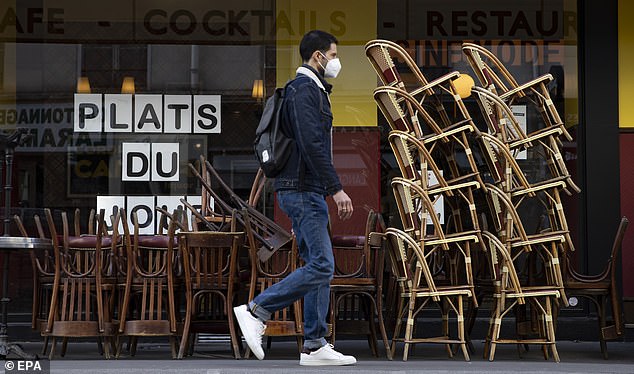 A pedestrian wearing a protective face mask walks past cafe terrace with chairs stacked outside a restaurant, in Paris

Unveiling France’s travel strategy, the President said that Americans and Europeans could come if they have been jabbed or have proof of a negative coronavirus test result – without specifying if Britons would be included in the continental passport regime.

Responding to the announcement, travel bosses slammed Macron’s ‘incredibly disappointing’ move and said it made ‘no sense’ to cut off vaccinated Britons while allowing unvaccinated Americans and Europeans to visit.

Speaking to MailOnline, Dr Steven Freudmann, Chairman of the Institute of Travel & Tourism and former President of ABTA, suggested the ploy is ‘politically motivated and not guided by the scientific reality’.

He also pointed out that UK tourism is an incredible boon to the French economy, with statistics showing that British holidaymakers spent more than £5billion while visiting the country during 2017.

Fernando Valdes told Sky News: ‘I think we will be ready here in Spain. We also think that the vaccination scheme in the UK is going pretty well, so hopefully we’ll be seeing this summer the restart of holidays.’

He added that certificates enabling holidaymakers to prove they have been vaccinated or recently tested are ‘going to help us’.

Tourism in Spain – the world’s second-most visited country before the pandemic – fell 80 per cent last year and the country wants visitors back fast. 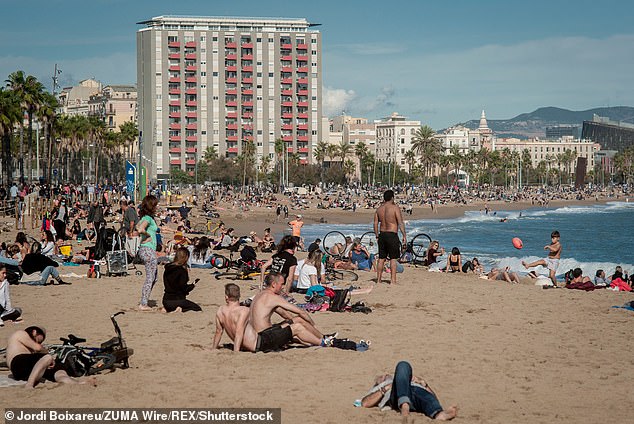 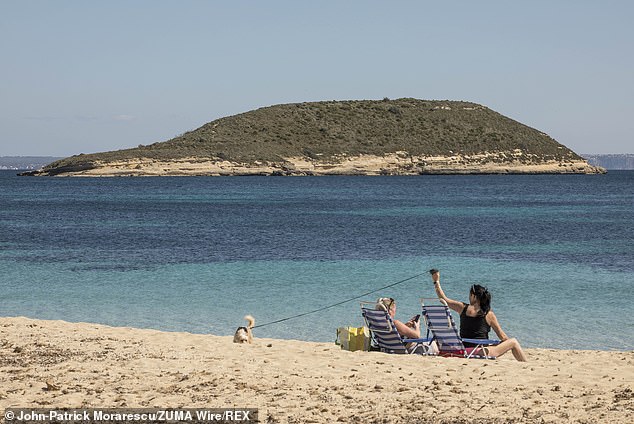 March: But like much of Europe it has grappled with a third wave (Magaluf pictured)

But Spain’s chances of being on the British government’s green list hangs in the balance, with Paul Charles predicting it will probably be amber.

While the country has now given vaccines to 21 per cent of its population, its case rate is still much higher than the UK’s.

The rolling seven-day average for daily cases was yesterday more than 8,000, compared with around 2,000 for Britain.

However it is understood that Spain’s Canary Islands – a holiday hotspot – could be included on the green list because of the low level of cases.

Croatia is one of a clutch of countries to have mooted using vaccine passports as a way to save foreign travel this summer.

But with a low vaccination rate and cases rising rapidly, the European holiday favourite will likely be overlooked for green list status.

After a huge spike in January, the country is in the teeth of an aftershock and yesterday recorded 2,000 more cases.

The R rate is also estimated to be at 1.18, meaning infections are rising.

However the country is still hoping to lure visitors to its beautiful beaches and vibrant tourist spots this summer.

Arrivals who have been vaccinated, recovered from Covid or had a negative PCR test will be able to go to Croatia for holidays.

Nikolina Brnjac, the country’s tourism minister, said: ‘EU citizens, as well as non-EU citizens, who have either recovered or been vaccinated or have a negative PCR or EU-approved antigen test, will be able to enter Croatia for tourist reasons.

‘We have intensified preparations for the upcoming tourist year; we are arranging additional points for testing in tourist places in order to make our tourists’ stay in the Republic of Croatia as pleasant and safe as possible.’