The little-known button on ceiling fans that EVERYONE needs to know about ahead of summer: ‘This is a game-changer’

A mum has wowed hundreds of Aussies after alerting them to a switch on ceiling fans that takes them from winter to summer mode.

The mum shared a picture of herself cleaning the fan on a popular Facebook Page and highlighted the seasonal switch at the base.

‘Spring is here and the weather is heating up! Time to flick the little switch from winter to summer,’ she wrote.

The mode changes the direction the blades spin; a fan spinning in a clockwise direction pushes hot air back towards the ground, which is not ideal in the summer months.

The seemingly unremarkable post quickly went viral, with hundreds of group members revealing they had ‘no idea’ ceiling fans had different setting.

‘How on earth did I get to my mid 40s without knowing this?’ one woman asked.

Others explained they had ‘been up there to clean’ their fans a ‘few times a year’ and never noticed the switch before.

‘I just checked and mine has it too, I can’t believe I have never seen it before,’ one woman said.

Did you know about the seasonal switch?

‘Hands up who is heading off to check for a switch,’ added another woman whose comment was liked 37 times.

While others said they had noticed the switch but didn’t understand why it was there.

‘What difference does it make? I have known mine has had it for a few years now but never actually touched it,’ one woman said.

But some people said they prefer to have their fans switched to ‘summer’ all year long.

‘I have menopause, stays on summer,’ one woman said.

‘Where I live it is always on summer mode,’ added another. 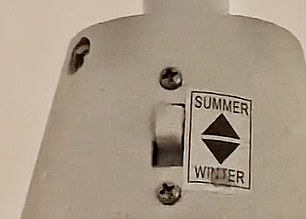 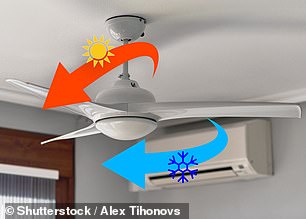 Another revealed how she came to know about the ‘secret switch’.

‘I still remember when my partner said we should switch the fans over for winter, and I ignored him because I thought he was being sarcastic,’ one woman said.

Hundreds of people liked and commented on the informative post.