Where were you when… Jill Morrell and John McCarthy were reunited? 8 August 1991

Where were you when… Jill Morrell and John McCarthy were reunited? 8 August 1991

When the man she loved was taken hostage, she refused to give up hope, says Miranda Thompson

John said, ‘We are two ordinary people getting to know each other again. It’s very nice’

After being held captive for 1,943 days in Beirut by a Shia militant group, British journalist John McCarthy was released. For his supporters in the UK, it was the climactic end to a love story that had been more than five years in the making.

In April 1986, then aged 29, John had been on his first foreign assignment in Beirut for United Press International Television News when he was taken hostage by the Islamic Jihad Organisation. A week earlier, Irishman Brian Keenan – who taught at the American University of Beirut – had also been kidnapped. During their ordeal, after months in isolation, Brian and John would share a tiny cell, half-starved and chained to a wall.

Back home, John’s family and friends relentlessly campaigned for his release as ‘Friends of John McCarthy’, led by his girlfriend, journalist Jill Morrell. She made it her duty to keep his name indelibly stamped on the public consciousness with a campaign of events: benefit gigs, yellow ribbons, badges, billboards and cinema adverts. Jill released balloons from the top of Blackpool Tower, kept vigil at St Bride’s Church on Fleet Street and made televised pleas for his freedom. The nation was gripped. Everyone willed for his release – and for them to be reunited.

Following UN-led negotiations, John was finally released and taken under army escort to Damascus, where he was reunited with his father and brother. Back in the UK, Jill was ‘ecstatic’. ‘There were times when it seemed like it had been going on for an eternity,’ she said. ‘But we all always knew that John would be released one day.’

The pair, who had been apart longer than they were together, went on to write Some Other Rainbow, a memoir of John’s years in captivity.

The country was heartbroken when the couple announced the end of their 12-year relationship in 1995. ‘I’m always going to be in awe of what she did for me,’ John said. 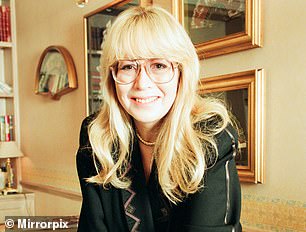