Which are the healthiest nations in the world?

The world’s healthiest and unhealthiest countries have been revealed in a global league table.

Singapore topped the charts of 149 countries followed by Luxembourg, while the bottom ten consisted solely of African nations.

The UK, US and Australia did not feature in the top ten, according to the research by the Legatum Institute.

Experts have today warned health improvements are starting to ‘flat-line’ – despite advances in recent decades.

Singapore topped the charts of 149 countries followed by Luxembourg, while the bottom ten consisted solely of African nations

The report, published today, judged countries on their healthcare systems, level of disease, obesity rates and other measures.

The annual prosperity index breaks down the best and worst places to live around the world for nine categories in total. One category is health.

Australia was the best performing of the major Western countries, ranking 12th, according to the research by the London-based education charity.

The quality of life of people globally is rising but the gaps between the best and worst is wider than ever, experts warn, showing huge inequalities in health, finance, politics, education and safety and security. 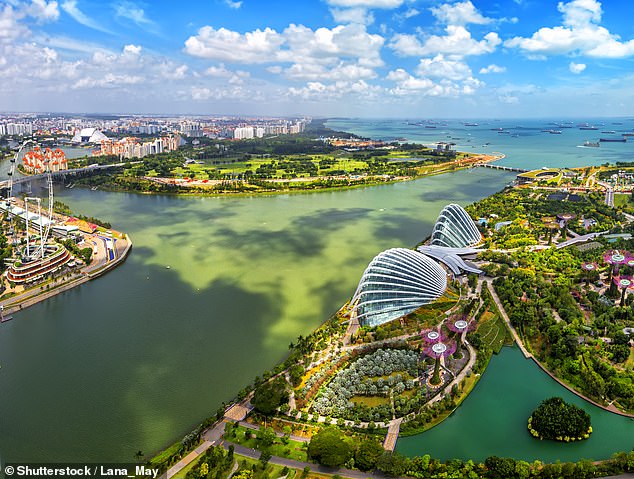 Singapore was ranked the healthiest country in the world followed by Luxembourg and Japan, in the Legatum Prosperity Index released today

On the entire index, the UK was rated the seventh most successful country in the world. But health is the country’s achilles heel.

The US also struggled to do well in the health category, which was its second worst performing area – after safety and security in which it ranked 43rd.

‘Having risen strongly at the beginning of the last decade, world health is now beginning to flat-line,’ said the report.

‘The long-term trends of rising life expectancy and increased access to basic sanitation continue, particularly noticeable in the Asia-Pacific region.

‘But these effects have been offset by more people reporting health problems and higher reported incidences of sadness and worry.’

The ranking was produced by measuring life and death-related factors like life expectancy, perceptions of health problems, vaccination rates, tuberculosis, obesity and diabetes.

And it also took into account feelings of joy, sadness, and worry, people’s satisfaction with their country’s healthcare, and the quality of sanitation facilities.

Big movers include Zimbabwe, which had the biggest increase in life expectancy, with it rising 15 years in the last decade.

THE HEALTHIEST COUNTRIES IN THE WORLD

THE LEAST HEALTHY COUNTRIES IN THE WORLD

Laos, India and Tajikistan have had the best recent increase in the quality of their healthcare systems.

On the negative side, people in eastern Europe are the least satisfied with their healthcare of anyone in the world.

And nine out of 10 of the world’s most obese nations are all in the Middle East and North Africa.

The other is the US, where 36 per cent of people are dangerously overweight.

Each country was ranked by each of these measures – the top three overall were Norway, New Zealand and Finland.

And at the bottom were Afghanistan, Central African Republic and Yemen.

Baroness Philippa Stroud, CEO of the Legatum Institute said: ‘The very good news is that we see prosperity continuing to rise in the world, both over the last year and consistently over the last 11 years.

‘The news is not all good, however.