Which banks are winning the current account switching war?

The number of people swapping current accounts between January and March using the official service fell more than a quarter on the previous three months, data shows.

In that previous three month stretch, switchers were largely lured in by a cash carrot offered by one of Britain’s biggest banks, Lloyds, which gobbled up the most customers by far.

TSB and Santander were the big losers, with the latter suffering after cutting its once generous in-balance interest rate and cashback sweeteners, according to the individual bank switching data.

Meanwhile, another two who lost a net number of customers – Halifax and HSBC – have since relaunched incentives, showing how important they are to gain customers.

Although, the second biggest net gainer from the data – Starling Bank – doesn’t offer them, and is instead relying on customer service and its app. The individual bank data lags a month behind the overall data.

Current account switches dipped significantly in January and February with only 74,252 people swapping throughout the two months.

But there are early signs that peoples interest in switching is picking up again.

In March alone, 63,724 switches were recorded, at the same time as the roadmap for the Covid-19 recovery became clearer.

‘The switching numbers have certainly ramped up in 2021 and are well above the lows seen between May and July 2020 during the first lockdown – when only 98,192 people switched,’ said Andrew Hagger of personal finance site Moneycomms.

‘This has been partly driven by an increase in the number of switching incentives on offer, but also by people getting back to normal pre-lockdown habits in trying to find a better or more suitable bank account.’

The most commonly cited reasons for favouring a new account continued to be ‘non-financial’ according to the Current Account Switch Service.

Online and mobile banking offerings and better customer service were reported as the most common reasons why customers would switch bank accounts, rather than upfront welcome bonuses.

This is perhaps one reason why Monzo and Starling continue to perform strongly and steal customers away from the established banks. 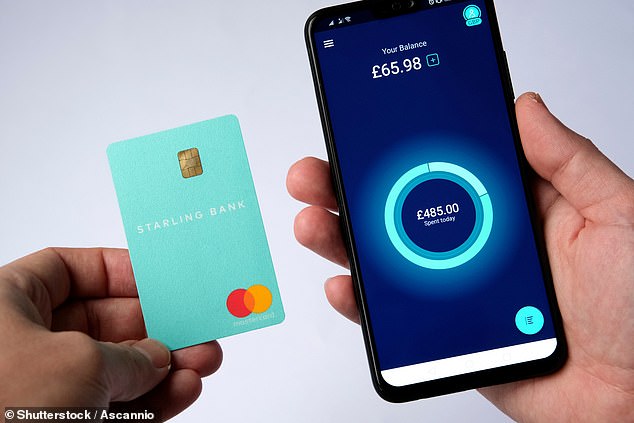 A current account winner: Starling Bank managed to bag the third most amount of switching customers, while losing only 1,796 in the process between October and December data shows.

‘It is once again the digital only banks, Starling and Monzo who catch the eye as these brands are able to attract strong net switcher numbers without having to offer a bribe,’ said Tony May, banking specialist at the personal finance comparison site, Finder.com.

‘The big losers in the final quarter of 2020 were Santander and TSB, with customers giving these brands the thumbs down following their decision to reduce or remove their previously popular interest paying current accounts.’

But there is evidence that cash incentives do work.

Lloyds Bank, which was offering a £100 cash incentive during the final months of last year seemingly achieving its purpose.

The bank enjoyed the largest number of new joiners via the CASS service in the final three months of 2020, gaining 41,514 whilst losing 11,958.

‘It’s clear to see from the switching statistics how incentives can impact the flow of consumers moving their current account and indeed due to the pandemic, there was a notable drop in upfront free cash and perks for customers using the CASS,’ said Rachel Springall, personal finance expert at Moneyfacts.

‘As things start to settle, we may see more people proactively checking their account and looking to switch to something that will work harder for them and a free perk could still be a key driver for some.

‘There is also something to be said about confidence returning in consumers feeling more comfortable to move their deal during such a long period of uncertainty.’

What are the advantages of switching?

Since the service launched in 2013, the CASS has facilitated over 7.2million account switches and successfully redirected more than 106.9million payments.

Of those who completed a switch using the CASS, 71 per cent say they prefer their new current account, with only 3 per cent stating that their new account was worse.

For customers fed up with poor service or a lack of perks at their existing bank – switching can be a great option.

Finding a current account that works best for you, may mean looking past headline grabbing cash incentives.

If you’re looking for a bank offering better online or mobile accessibility as well as customer service it may be worth also considering some of the new challenger banks such as Starling, Monzo and Triodos Bank.

‘Over the years there have been challenger banks taking a slice of the current account market under the CASS and these brands offer high levels of service and a straightforward package,’ said Springall.

‘Clearly, consumers find service and simplicity a great feature when they are choosing a bank account.’