With a fortune of £160 million, Ed Sheeran could have booked any pop act in the world to perform at a party to celebrate his marriage.

But the headliners at the star-studded event this summer at Sheeran’s country home will be boyband Westlife – because he credits them for his success.

Ed is thought to have quietly married his childhood sweetheart Cherry Seaborn at Christmas, but The Mail on Sunday can reveal they are planning a second celebration at their home.

Guests are likely to include Taylor Swift, the Beckhams and Harry Styles.

The singer has applied for planning permission for a temporary glass marquee in the grounds of his home in Framlingham, Suffolk, where Westlife’s Shane Filan, Mark Feehily, Kian Egan and Nicky Byrne are expected to perform their No 1 hit Flying Without Wings for the couple’s first dance.

The song was released in 1999, when Sheeran was eight, and a source said: ‘Westlife are a very unlikely choice on the face of it, but actually there is quite a deep connection there.

‘When Ed was a kid, he loved that song. It inspired him to sing and learn to play the guitar, and it remains really special for him.

‘Of course, he could have had anyone he wanted to play at his big day, but Ed likes special touches and, for him, Westlife are that. Flying Without Wings is a song that means an awful lot to him.’

Sheeran, 28, has developed a close friendship with the Irish band, which had a string of hits before splitting in 2012, then reforming last year.

As well as writing four songs for Westlife’s forthcoming album, Spectrum, Sheeran may make a guest appearance during the band’s tour, which began in Belfast last week. 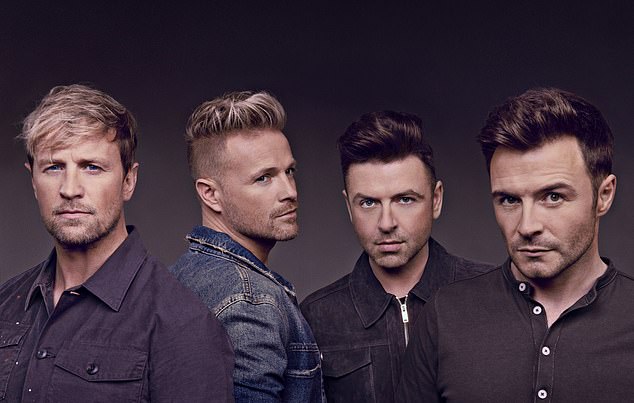 Inspiration: Ed has chose the Irish band as he credits them for his own success in the music industry

According to the planning application, Sheeran’s wedding party marquee would be close to a wildlife pond in the grounds of his home.

The Mail on Sunday revealed earlier this year that the pond was at the centre of a row because Sheeran’s neighbours feared it would be used as a swimming pool.

East Suffolk Council approved the pond in 2016 on condition that it was not used for ‘recreational leisure such as swimming’, but neighbours accused the star of creating an environment for a ‘wild lifestyle’ rather than ‘wild life’.

Those concerns were rejected following a visit by planning inspectors, although Sheeran was told to remove a sauna close to the pond.