Which? warns Ryanair passengers not to use the airline’s ‘rip-off’ currency conversion tool

Which? warns Ryanair passengers not to use the airline’s ‘rip-off’ currency conversion tool that can add £30 to a family fare

Travellers are being warned by a consumer watchdog not to get caught out by Ryanair’s ‘rip-off currency conversion tactics’.

Research by Which? has revealed that in one instance a family of four faced being charged an extra £30 by paying for their flight with the no-frills airline using its ‘dynamic currency conversion’.

And now the consumer champion is calling on the aviation regulator to take action and finally clamp down on the practice.

Which? is warning travellers not to getcaught out by Ryanair’s ‘rip-off currency conversion tactics’

Ryanair customers are faced with the currency conversion system when the Irish-based carrier displays the price of a ticket in the currency of the departure airport.

For instance, if a customer is buying a flight from France or Italy back to the UK, the fare is advertised in euros.

However, when prompting the customer to enter card details at the very end of the booking journey, it switches the price into pounds – automatically applying an exchange rate.

Which? claims that only after clicking ‘more information’ do customers find the option to opt out of paying in pounds and revert to euros.

Ryanair warns that opting out could end up costing ‘significantly more’.

But Which? Travel says this was far from the case with the flights that it examined.

In a spot check, it found a journey from Alicante to London Stansted for a family of four advertised as €565.81. But at the point of paying, Which? says Ryanair switched the currency to pounds. The total fare became £526.97, an exchange rate of 93p per euro.

On the same day, Visa had an exchange rate of 88p per euro. This meant that if the customer opted out they would have paid just £496.72 for the same flight – £30 less than with Ryanair’s currency exchange.

Which? also analysed two other family fares, one from Venice to Stansted and one from Nice to Stansted, and found that the currency conversion tool added an extra £26.40 and £21 to the prices respectively. 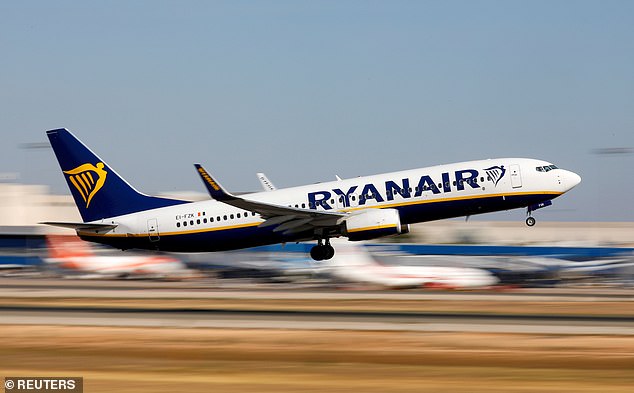 Which? revealed that in one instance a family of four faced being charged an extra £30 by paying for their flight with the no-frills airline using its ‘dynamic currency conversion’.

Meanwhile, a single adult fare from Berlin to London would have cost £235.29 with Ryanair’s exchange rates – compared to £221.78 with Visa. That’s a difference of more than £13, Which? found.

Across all the journeys that Which? Travel examined, Ryanair’s exchange rates inflated its fares by around six per cent on average.

Aer Lingus was the only other major carrier to automatically switch currencies at the check-out, although Which? says it makes this switch – and the cost implications – much more clear.

It found that the price of one flight with Aer Lingus increased by 3.5 per cent when paying through dynamic currency conversion.

The consumer champion believes the tactic is misleading and could be in breach of consumer protection legislation, specifically due to the opaque way it presents the rate to customers.

With the Civil Aviation Authority preparing to publish a report that will criticise airlines for failing to clearly spell out the true price of travel at the end of this month, Which? says it believes the report should single out Ryanair’s currency conversion tactic and clamp down on the practice so that the airline is not able to continue ripping-off their customers in this way.

Caroline Normand, Which? director of advocacy, said: ‘This cynical and misleading pricing trick is one of the clearest examples of a rip-off we have seen – but Ryanair has been allowed to get away with it due to a lack of action from the Civil Aviation Authority.

‘If the regulator is committed to helping improve the experience of passengers, it must clamp down on this practice before thousands more holidaymakers are caught out this summer.’

A spokesperson for Ryanair told MailOnline Travel: ‘Ryanair’s currency conversion presentation is fully transparent and complies with all applicable EU and national laws on consumer protection.

‘Customers have the option of paying in the currency of their payment card which gives absolute certainty of the final payment amount.’