A whistleblower has sued the LAPD claiming it’s run by a ‘SWAT mafia’ promoting a ‘culture of violence’ that saw officers shoot an unarmed homeless man 40 times and taser another man causing him to plummet to his death off a roof.

Former SWAT Sgt. Tim Colomey, who served in the unit for 11 years, filed a civil lawsuit claiming the so-called ‘SWAT mafia’ of veteran officers turns a ‘blind eye’ and even ‘glamorizes’ the use of deadly force by agents.

Colomey also claims agents who try to deescalate conflicts instead of using lethal force face a backlash and are labeled ‘cowards’ by the group of veterans, Herald Media reports.

The ‘culture of violence’ has led to several shocking incidents in the unit, the suit alleges, including three that Colomey raised in a whistleblower complaint to LAPD internal affairs early last year.

In 2015, an unarmed homeless man was shot with a taser while climbing a ladder on the roof of a downtown LA building, jolting him and causing him to fall 15 feet to a parking lot below.

In another incident in 2017, a homeless man endured a hail of bullets from teams on the ground and from a helicopter overhead when he left a building unarmed following a tense standoff.

In the only incident where the suspect miraculously survived, officers offloaded 80 bullets into a shed where he was hiding out in 2017.

A whistleblower has sued the LAPD claiming it’s run by a ‘SWAT mafia’ promoting a ‘culture of violence’ that saw officers shoot an unarmed homeless man 40 times and taser another man causing him to plummet to his death off a roof.. Footage of Soderberg hiding out in the property before he was shot dead

It alleges officers are faced with the choice of either bowing to pressure to use deadly force or be pushed out of the unit.

‘SWAT officers who have chosen not to use lethal force in suspect encounters, and who have instead sought to deescalate conflicts, have been ostracized and labeled ‘cowards’ by the SWAT Mafia,’ the suit says.

‘These officers will never succeed or promote within SWAT.

The suit alleges Colomey’s concerns were ignored by the unit and he was later forced out for refusing to comply with the violence: ‘As set forth below, Plaintiff chose the latter, and was forced out of SWAT for doing so.’

The suit does not cite specific incidents but Colomey’s attorney told the Los Angeles Times they include the three cases he blew the whistle on in last year’s complaint.

Carlos Ocana, 56, plunged to his death from a roof in May 2015 after Officer Steve Scallon shot him with a stun gun.

SWAT had been called to reports of a man on a roof and found Ocana on top of a billboard. 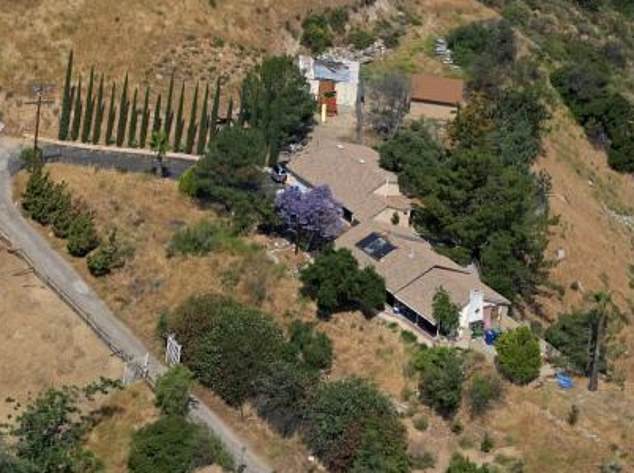 An aerial image of the house where Anthony Soderberg holed up. In 2017, he was shot dead after SWAT teams on the ground and in a helicopter fired 40 bullets at him when he left the property unarmed following a tense standoff

Authorities tried to get him to come down by leaving a cigarette for him at the bottom of a ladder and offering him a lighter.

Ocana took the cigarette but went to climb back up the ladder, and Ocana tasered him.

The homeless man was thrown off the roof by the taser and fell to his death.

The cop later told the investigation into the incident he had tasered Ocana to stop him going back up the ladder.

The man’s death sparked protests from nearby residents who said the SWAT team’s ‘big guns’ had terrified Ocana and demanded cops change how they respond to people with mental illness.

The investigation into the incident concluded Scallon’s actions ‘substantially and unjustifiably deviated’ from his training.

Ocana’s tragic death came two years before the death of another homeless man, 29-year-old Anthony Soderberg, also at the hands of the SWAT team.

Officers were called to a home in Sunland in May 2017 after a woman found Soderberg in her kitchen.

Gunfire rung out from the property and Soderberg was heard shouting ‘I’ll put a bullet in your head,’ according to an investigation.

Soderberg holed up inside the home leading to a tense standoff with officers, during which Colomey was drafted in as a negotiator.

At one point Soderberg was seen with a firearm which he fired at the helicopter overhead.

The stalemate continued for several hours, before Soderberg was driven out of the home by a stinger grenade fired into the property.

The man was shot at 40 times including 14 rounds fired from the helicopter as he walked unarmed out the property.

He was struck 17 times by bullets and died at the scene.

An investigation found that the helicopter was 75 to 85 yards away from Soderberg and three other officers shot from as much as 189 yards away, meaning it was ‘not reasonable for these officers, from their distant location, to believe their intervention with lethal force was warranted.’

A total of 12 officers used deadly force in a way that ‘was not objectively reasonable and was out of policy,’ the investigation concluded. 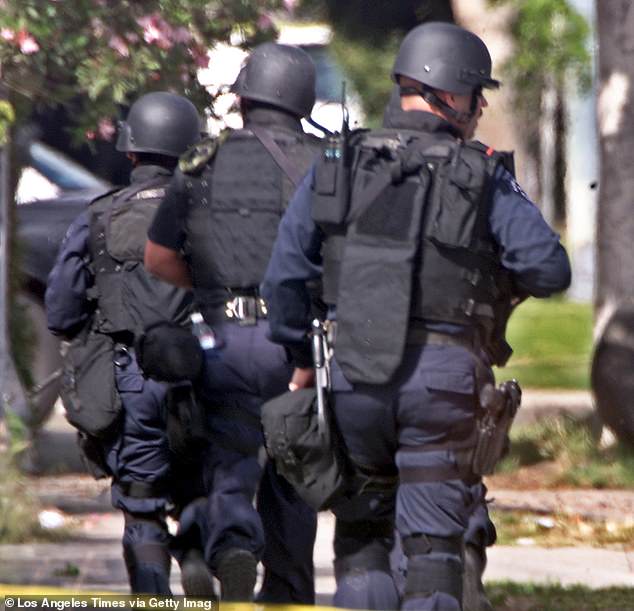 Pictured LAPD SWAT officers. Former SWAT Sgt. Tim Colomey, who served in the unit for 11 years, filed a civil lawsuit claiming the so-called ‘SWAT mafia’ of veteran officers turns a ‘blind eye’ and even ‘glamorizes’ the use of deadly force by agents

Soderberg’s family is also suing the LAPD for violating the 29-year-old’s rights and failing to properly train the SWAT team.

An attorney for the family told the Los Angeles Times one senior officer Lt. Ruben Lopez had given officers a ‘shoot-to-kill’ order.

‘The notion that they give thumbs up to these officers to use deadly force at any given time couldn’t be more true,’ said attorney Greg Kirakosian.

He also said the LAPD failed to disclose the complaint over the shooting raised by Colomey.

Lopez is also cited in Colomey’s lawsuit for quashing his complaints about the unit.

The third incident raised by the whistleblower took place just one month later in June 2017 when officers unloaded a staggering 80 bullets into a shed where gunman Joe Rauda was holing up.

Rauda was cornered inside the shed after he fled from cops during a shootout where an officer’s helmet was grazed and a police dog shot in the leg.

Rauda was finally arrested and sentenced to more than five centuries in prison over the incident.

A source told the Los Angeles Times Colomey raised the three incidents in an internal investigation that began in 2018.

They said the veteran agent argued the use of force by officers in the three cases could have been avoided.

DailyMail.com has reached out to the LAPD for comment.