Dr. Rick Bright, the Health and Human Services whistleblower, is poised to warn lawmakers Thursday that ‘2020 will be the darkest winter in modern history’ if a concrete plan isn’t followed to deal with the coronavirus pandemic.

In his pre-released opening statement, Bright told the Trump administration it needed to nationalize COVID-19 testing, something President Trump has resisted, and create a ‘national standard of procurement and distribution’ for much-needed medical equipment.

Bright also said that ‘our leaders must lead by modeling the behavior’ of wearing masks, washing hands and practicing proper social distancing.

Dr. Rick Bright will testify before a House committee on Thursday. He warned in a pre-released version of his opening statement that ‘2020 will be the darkest winter in modern history’ if a concrete plan to deal with the coronavirus pandemic isn’t implemented 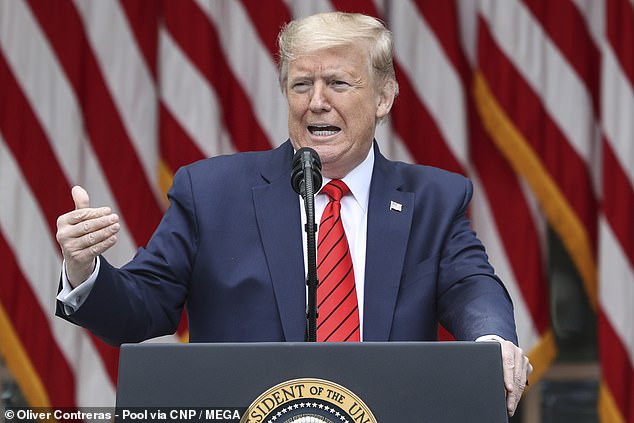 While Dr. Rick Bright doesn’t call out President Trump by name, he says in his opening statement that ‘our leaders must lead by modeling the behavior’ of wearing masks, washing hands and properly social distancing

Trump has refused to be photographed in a mask, telling aides he would look ridiculous, that it would ‘send the wrong message’ and that he feared those visuals would be used in attack ads by political opponents, according to reporting from the Associated Press.

Bright was the head of BARDA –  the Biomedical Advanced Research and Development Authority – until April 21, when he was moved to a ‘more limited and less impactful position’ at the National Institutes of Health, according to his statement.

He previously had filed a whistleblower complaint with the Office of Special Counsel.

‘I believe this transfer was in response to my insistence that the government invest funding allocated to BARDA by Congress to address the COVID-19 pandemic into safe and scientifically vetted solutions, and not in drugs, vaccines and other technologies that lack scientific merit,’ he said in his opening statement.

In the whistleblower report he went into greater detail and included anecdotes – like that he was pressured  by management and a pharmaceutical lobbyist to do business with a company whose CEO was friends with Jared Kushner, the president’s son-in-law and a top White House aide.

More recently, Bright complained that HHS management didn’t do enough to prepare for the brewing coronavirus pandemic and then wanted to ‘flood’ COVID-19 hotspots with unproven remedies including hydroxychloroquine and chloroquine, drugs President Trump had promoted.

‘I witnessed government leadership rushing blindly into a potentially dangerous situation by bringing in a non-FDA approved chloroquine from Pakistan and India, from facilities that had never been approved by the FDA,’ Bright told reporters last week, according to the Associated Press. ‘Their eagerness to push blindly forward without sufficient data to put this drug into the hands of Americans was alarming to me and my fellow scientists.’

For his testimony, Bright said he wanted to be more ‘forward looking,’ though added that he initially spoke out because ‘science – not politics or cronyism – must lead the way to combat this deadly virus.’

‘Our window of opportunity is closing,’ he warned in his opening statement. ‘If we fail to develop a national coordinated response, based in science, I fear the pandemic will get far worse and be prolonged, causing unprecedented illness and fatalities.’

‘Without clear planning and implementation of the steps that I and other experts have outlined, 2020 will be darkest winter in modern history,’ Bright said.

Some of the planning, Bright explained, was simply better public education.

‘As an example, in 2009, the CDC, along with Elmo, taught Americans how to sneeze in a way that minimizes risk of contagion,’ he said. ‘Today, we need clear and simple messages to teach us how wear a face cover, when and how to safely go outside or back to work or back to school. It’s that simple.’

He then implored the Trump administration to step up and make the coronavirus response a national approach.

The president has delegated decisions on when to reopened to the states. He’s also tried to make governors responsible for each state’s testing infrastructure. States were also competing against one another to buy personal protective equipment.

Bright argued that all these practices needed to stop.

‘The virus is out there, it’s everywhere,’ Bright said. ‘We need to be able to find it, to isolate it and to stop it from infecting more people. We need tests that are accurate, rapid, easy to use, low cost, and available to everyone who needs them.’