White bread rolls made with flour from CHICKPEAS slashes blood sugar levels by 40% and could stave off type 2 diabetes and obesity, study finds

Pictured, one of the bread rolls made with PulseON ingredient made from chickpeas

White bread rolls made with a newly-created ingredient lower blood sugar levels by 40 per cent when compared to traditional recipes, a new study reveals.

The standard milling process exposes starch from wheat flour, which makes it easy for the digestive system to break down, and this results in a spike in the body’s blood glucose levels.

This response is natural, but overstimulation of this due to poor diet has been linked to increased risk of type 2 diabetes and obesity.

However, substituting wheat flour for a new type of flour made from chickpeas protects starch inside its natural casing, and therefore makes it much harder for the body to break it down.

Because the body can not reach the starch to digest it, the body’s glycaemic response — conversion of food into sugar — is far lower.

Researchers hope that the new ingredient could be integrated into other foods and help combat cases of type 2 diabetes and obesity. 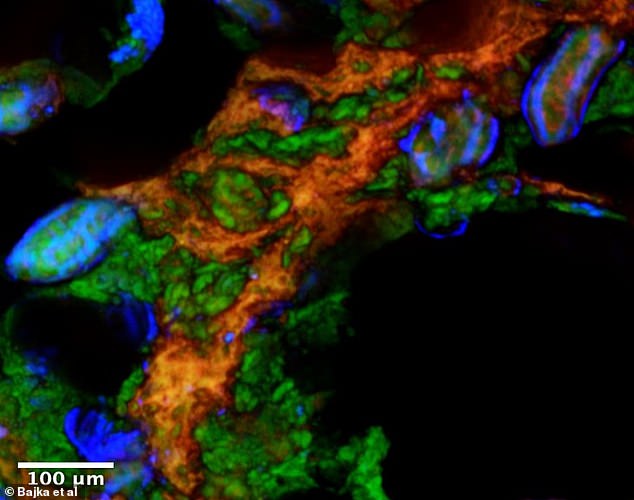 PulseON, the ingredient made by scientists, keeps its starch inside cell walls, which the body’s digestive system cannot break down.

In normal milling and processing, many plant cells rupture, exposing the starch and making it much more digestible.

Because the body can not reach the starch to break it down, the body’s glycaemic response — conversion of food into sugar — is far lower.

The new ingredient, called PulseON, was made by researchers from King’s College London (KCL) and the Norwich-based Quadram Institute with funding from the UKRI.

In a peer-reviewed study published in the journal Food Hydrocolloids the researchers explain they used PulseON to replace either 30 or 60 per cent of wheat flour in a bread roll recipe.

These were given to 20 study participants who alternated between eating one of the enriched baps and a normal roll every morning for breakfast.

Their blood sugar levels were monitored daily and revealed the new ingredient caused a 40 per cent drop in blood glucose levels.

The study participants were healthy individuals aged between 18 and 45 and also reported that the enriched bread had a similar taste and texture to rolls made with traditional wheat flour.

Many pulses, including chickpeas, beans and lentils, are naturally high in a type of starch which is resistant to digestion and broken down slowly by the body, dubbed ‘Type 1 starch’.

However, this natural benefit is lost during the process of milling as it breaks down the cell walls which protect the starch.

The researchers drew up a new technique which preserves the cellular integrity, ensuring it is broken down into glucose at a much slower rate by the body. 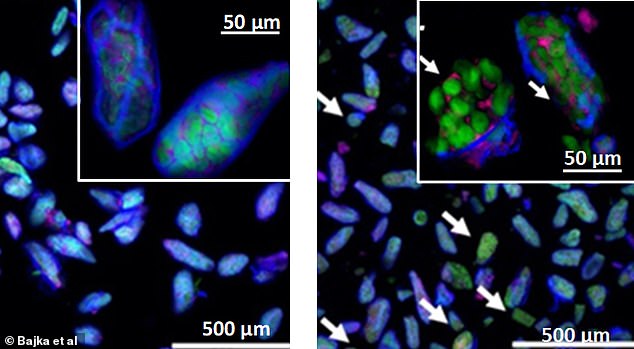 Left: PulseON flour, looked at under the microscope. Green shows the starch (green) remains inside the plant cell wall (blue), which protects it from digestion. Right: In normal milling and processing, many plant cells rupture, exposing the starch (green) and making it much more digestible

Lab analysis of the enriched breads reveals the reason they have a lower glycaemic response is due to them being harder to digest.

Regular wheat flour was fully digested in a test tube within two hours whereas the resistant chickpea-derived ingredient remained undigested.

This not only lowers blood glucose levels, but also increases fibre and protein content, the researchers say.

‘Incorporating our new type of flour into bread and other staple foods provides an opportunity to develop the next generation of low glycaemic food products to support public health measures to improve health through better diets,’ said Dr study author Cathrina Edwards from the Quadram Institute.

Previous research has found the innovative milling process could also be applied to lentils and beans, opening up the possibility that a range of low-carb flour substitutes could be manufactured in the future.

Upcoming research will seek to determine what other foods the resistant PulseON can be integrated into besides bread.

‘Alternative processing methods that preserve cell integrity are a new, promising way to provide healthier low glycaemic staple foods; we anticipate that this will improve dietary options for diabetes care,’ the researchers write.

A breathalyser that detects early warning signs of chronic diseases like diabetes and cancer is being created by scientists after the development of a new sensor.

Researchers successfully created a material called a ‘nanoparticle scaffold’ which is made of tiny pieces of metal and semiconductors — all thousands of times smaller than a human hair — that are integrated into a small and highly-sensitive sensor.

These will be fitted into handheld devices, similar to what the police use to test drunk drivers, to detect signs of disease in a person’s breath, scientists say.

This proof-of-concept study is now being taken to the next stage and a prototype is currently being built.

Biomarkers of disease can be used to identify the presence of infection or a burgeoning long-term health condition and are currently spotted via blood tests.

But these hallmarks of illness are also found in a person’s breath, but at much lower concentrations.

Currently, it takes a lab analysis and expensive electrical equipment to detect their presence but researchers at Nottingham Trent University and the Australian National University have been working on making a cheap and easy way of spotting them without invasive procedures.

To do this, the researchers focused on creating specialised nanoparticles which increase the sensitivity of optical tests that do not need electricity or highly-trained lab staff to give a result.