Video circulating on social media shows the moment a car passenger calls an occupant of a nearby car the N-word and screams ‘black lives don’t matter’ in a racially-provoked attack.

In footage taken by the victim, the assailant – who is white – is seen as the passenger in an orange car yelling at someone in a nearby car while the driver cruises down a street.

The man later identifies himself as Barry Wardell and claims he works as a chef. Wardell is from New Hartford in Utica, New York. 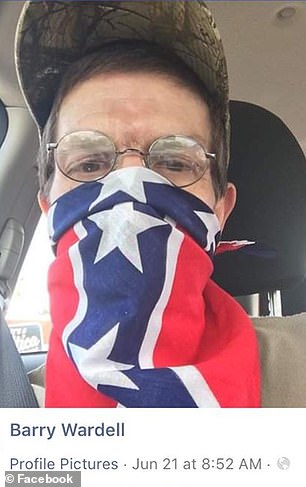 Video shows the man, who identifies himself as Barry Wardell, yelling at a driver: ‘Put me on Facebook, black lives don’t matter! N****r!’ A Facebook profile seemed to have been deleted on Sunday and shows him wearing what appears to be a Confederate flag as a face covering

Confused at Wardell’s behavior, the victim, Jakeila Phillips, asks: ‘What did you say?’ to which the racist attacker replies: ‘I hate n****rs.’

In the clip – which has been uploaded to Twitter and has since gained over 254,000 views, Wardell then shouts that he wants to be exposed on social media for his hate speech.

Wardell continues: ‘Blacks should be slaves. Give me back my grandparents’ property divided by your f**king ancestors.’

He ended his racist rant telling the driver, ‘no disrespect to you’, as the victim drove away from the scene. 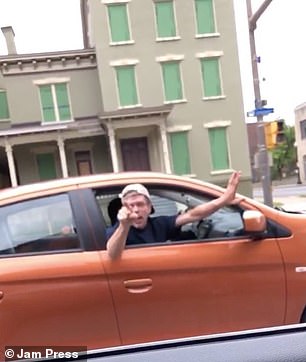 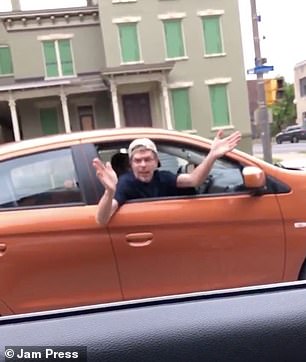 Wardell claimed he works as a chef and yells ‘I hate n****rs’. Wardell is from New Hartford in Utica, New York

The driver in the car occupied by Wardell does not react at all.

Phillips laughs throughout the encounter.

But in a Facebook post where she shared the video she explained: ‘When I tell people I experience racist/prejudice encounters all the time they never believe me cause we live in Utica ! I finally got to catch one on camera.’

It is not known if the incident has been reported to the police.

A Facebook profile that had Wardell’s name on it appeared to have been deleted on Sunday and shows a man wearing a cap and what appears to be a Confederate flag as a nose and mouth covering.

It’s unclear what grandparents’ property he refers to in the video but records show that property belonging to Barry Wardell, and Steve and Dori Pacheco violated the Property Maintenance Code of New York.

In an April 2018 meeting town hall meeting a Town Codes Enforcement Officer was directed to serve written notice that the property owners are required to fence and secure the area around the home immediately’.

Notes showed they were told the ‘debris must be disposed of properly; and once this requirement is completed, the aforesaid owners can then apply for a Demolition Permit’.

It’s unclear how the land has since been used. 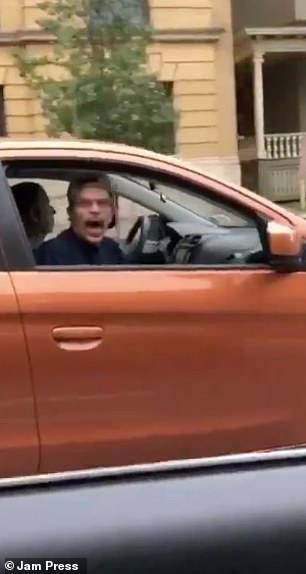 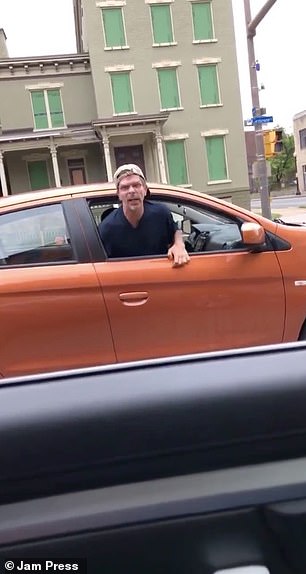 The driver in the vehicle occupied by Wardell doesn’t react. Wardell is seen leaning out of the car to yell his racist hate speech

According to reports, Wardell was involved in another racist incident the same day.

‘A young black man was walking down the sidewalk outside our house in the village of New Hartford today,’ Steph Anie posted on Facebook Saturday. ‘I wouldn’t have noticed, but a car driving by stopped and started screaming “n****r” out of their window and threatening to harm him.

‘We were in our play room and could hear their racist rage. A couple walking outside were able to get their license plate. My two-year old was scared. I was too. The police came and took statements.’

New Hartford Police said they were keeping an eye on the situation’.