The white cop who fatally shot a 17-year-old black boy in Illinois four years ago was seen leaving court holding hands with his wife on Wednesday, with both of them wearing bulletproof vests.

Jason Van Dyke, 40, is on trial for the first-degree murder of Laquan McDonald, who died on October 20, 2014 in Chicago.

He and his wife Tiffany left the Leighton Criminal Courthouse on Wednesday, holding hands with the vests visibly draped over the outer layers of their clothing, but under black jackets that they each left open.

In court on Tuesday, the defense team for Van Dyke was critiqued by prosecutors for using an animated video to recreate the moments before he was killed.

Jason Van Dyke, 40, who fatally shot 17-year-old LaQuan McDonald in Illinois four years ago was seen leaving court holding hands with his wife, Tiffany, on Wednesday, with both of them wearing bulletproof vests. 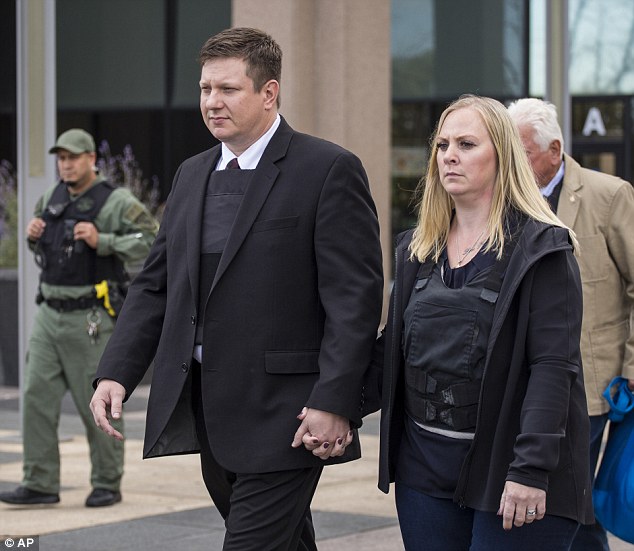 Jason Van Dyke and his wife Tiffany left the Leighton Criminal Courthouse on Wednesday with the bulletproof vests visible, draped over the outer layers of their clothing, but under black jackets that they each left open 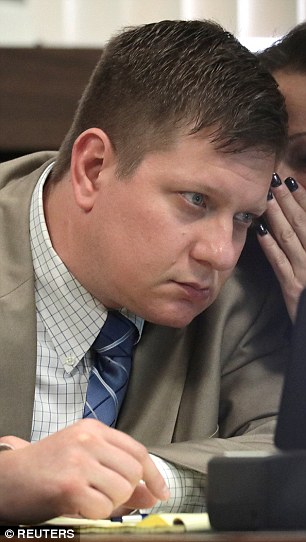 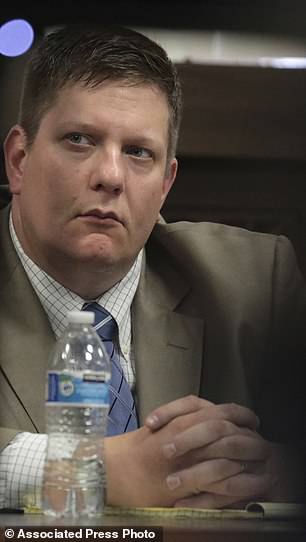 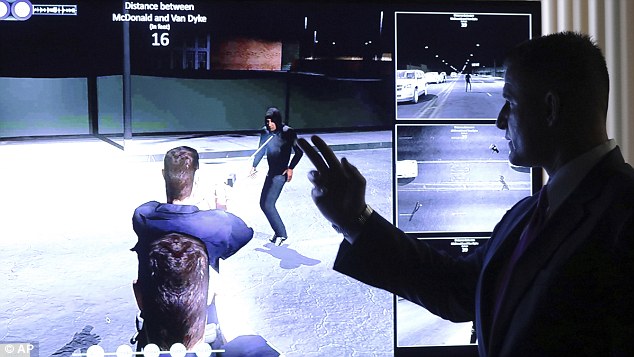 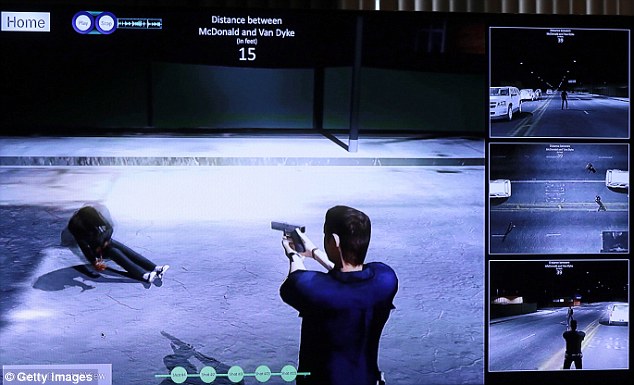 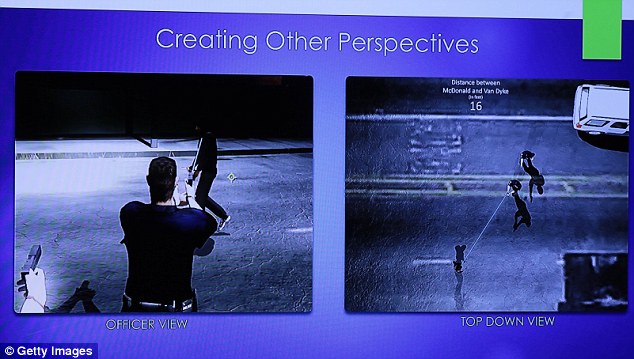 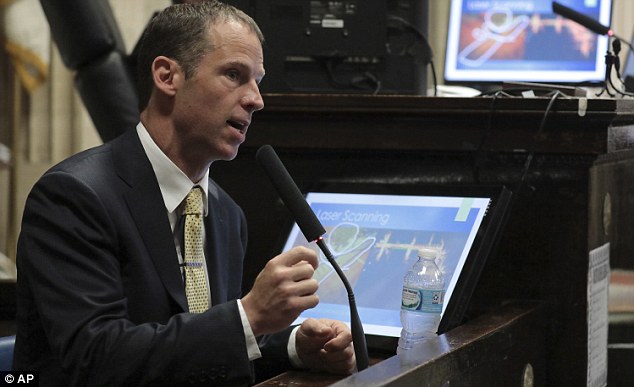 ‘He gave you specific direction about what he wanted you to do, correct?’ Ross asked him. He denied the claim about the video the making of which he also compared to creating a family film like Monsters, Inc.

The prosecution also poked holes in the way both the victim and shooter were dressed in the animation, reports WGN9.

It showed McDonald in all black instead of the jeans he wore, and Van Dyke not wearing a bullet proof vest which was also incorrect.

Additionally, the recreation showed McDonald getting closer to Van Dyke, going from 39 feet away to 13 feet in four seconds.

The four-minute clip only showed Van Dyke shooting five times despite it being known he shot McDonald approximately 16 times.

Forensics state at least one of the bullets were shot when the victim was already on the ground.

Despite the visuals with enhanced imposing angles having a good chance of influencing viewers to believe Van Dyke was more vulnerable and McDonald more threatening and sinister by connotation, Fries admitted he believed the details were ‘meaningless’. 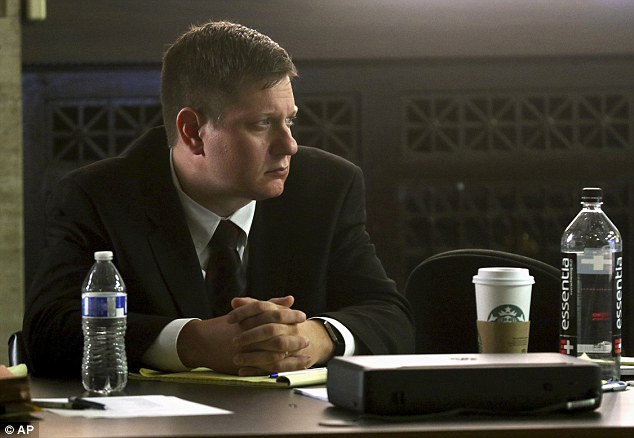 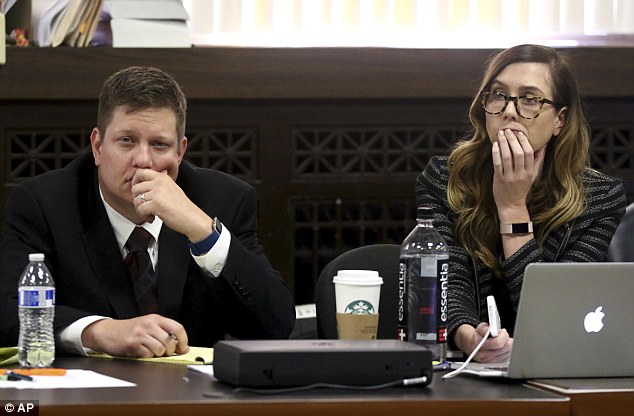 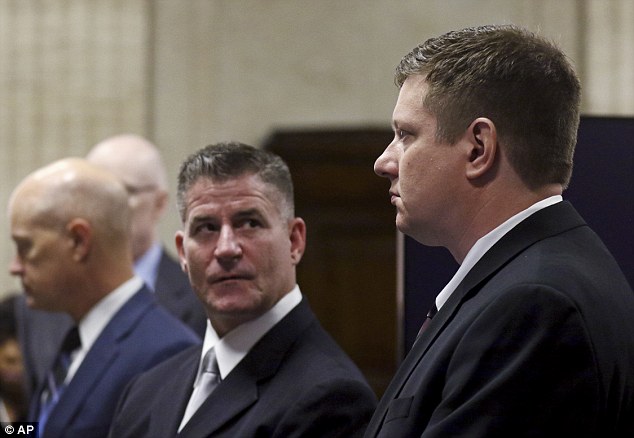 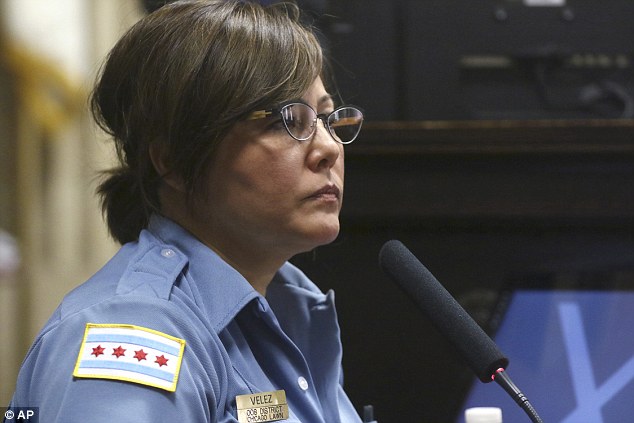 ‘It’s a detail that’s so meaningless to me that I wouldn’t spend time trying to figure that out,’ he said under cross-examination.

The court said Tuesday they would strike the video off if the truck driver who dialed 911 that night did not show as a witness Wednesday. 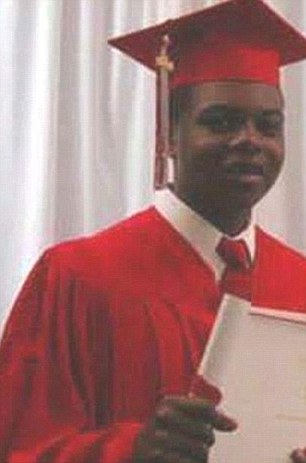 Rudy Barillas did testify with the help of a translator, saying he had warned McDonald he would call law enforcement if he didn’t leave the truck he’d spotted him in at the truck yard.

‘He couldn’t talk. He was tongue-tied,’ he said about the teenager who was shot around 10pm.

When Van Dyke’s defense attorney Randy Rueckert asked if it sounded like the victim growled, the judge stopped him in his tracks.

‘Mr. Rueckert, if you want to testify, we can swear you in,’ he interjected.

Earlier this month Rueckhert was accused of striking black people off the jury after getting rid of one African-American man. He denied race being the motive.

At the time 10 people had been selected including five white, three Hispanic, one African-American and one of Asian descent according to the Chicago Tribune.

Officer Leticia Velez said Wednesday she saw McDonald holding his side and believed he had a gun on him, adding he appeared to be in a ‘twilight’.

‘I had believed that he had something on him,’ she said during her testimony, reports CBS’ Beth Bria.

She later learned he was not carrying a firearm but was holding a three-inch knife. 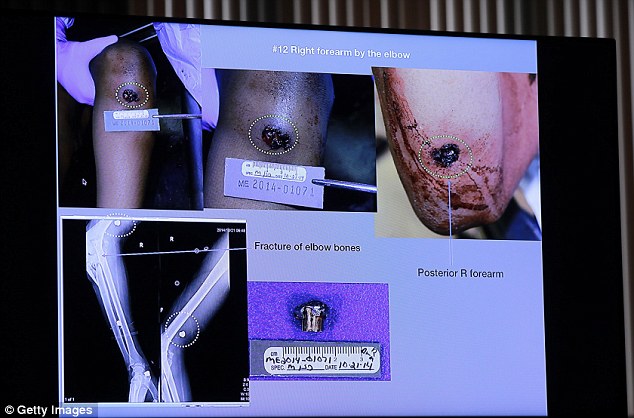 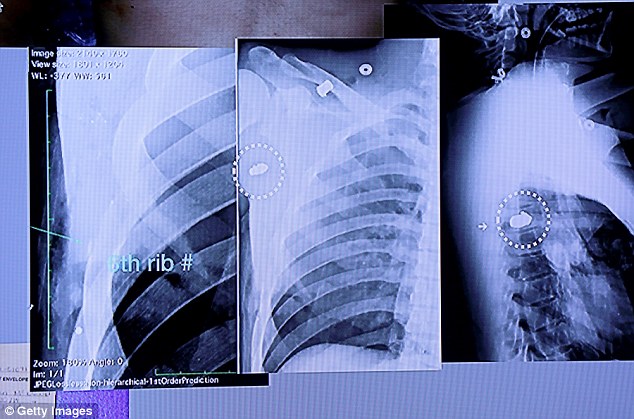 The court saw imagery of where bullets hit the teenager on the night of October 20, 2014

Velez told the court on the third day for the defense presenting evidence and the seventh day of the trial she was not called to the scene but went because her work partner wanted to.

‘We heard the call over the radio and it sounded like officers were in distress,’ she revealed about how they came upon McDonald.

Velez said she wanted to leave her vehicle when she got to the scene but her partner wanted to keep a distance.

Van Dyke – who also had Joseph Walsh, ex-Detective David March, and Officer Thomas Gaffney on the scene – said he was in fear of his life.

The three other men go on trial November 26 faces charges they lied to exaggerate the threat McDonald posed.

Prosecutors questioned why the driver and police thought they were at risk when the boy did not use a weapon as he fought with the truck driver who threw dirt and gravel at him in the confrontation. 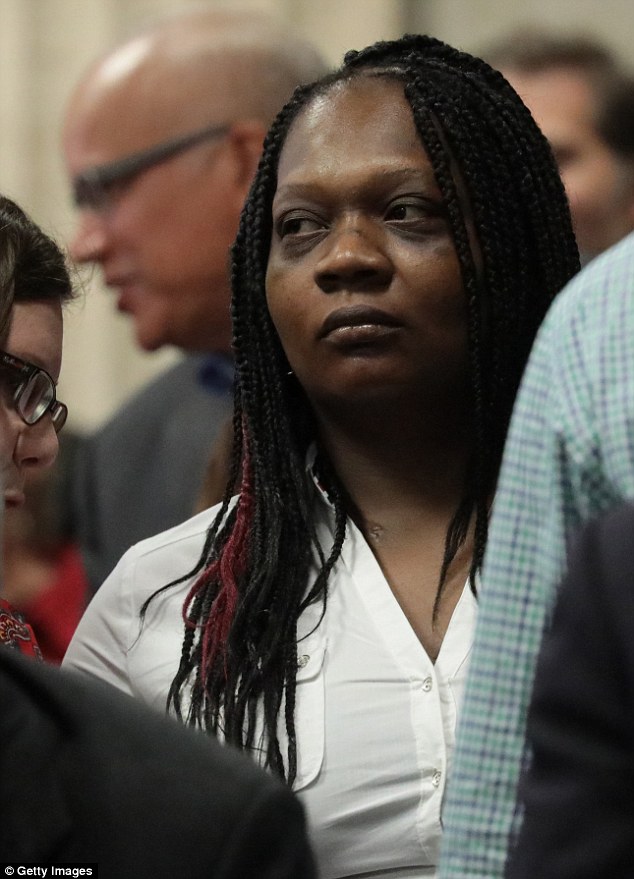 Former Deputy Chief David McNaughton and ex-Chief Eugene Roy retired after the city’s Office of Inspector General conducted an investigation into the shooting and recommended they be dismissed.

Lieutenant Anthony Wojcik was investigating on behalf of the police department but retired before the Inspector General finished looking into his case.

Sergeant Daniel Gallagher resigned after they recommended his firing.

The defense also called witnesses including Cook County Juvenile Detention Center’s Jackie Alexander Wednesday who quoted McDonald as saying he would ‘put a slug in the judge’s head’ when she spoke to him as he refused to go to his cell in 2014.

Richard Delk says McDonald resisted when he tried to restrain him at the same facility.

Under Illinois law, defendants who claim self-defense can present evidence about the past behavior of the person they killed, even if they weren’t aware of that history when the killing occurred.

It’s not known whether Van Dyke will testify.