A white woman was filmed angrily confronting two black police officers at a protest in Washington D.C. Tuesday, telling them that ‘they are part of the problem’.

The video of the protester, filmed by Henry Rodgers, a senior congressional correspondent for The Daily Caller, went viral after she went on a fiery rant about how being white did not stop her from criticizing the black cops.

The woman faced off with at least three black officers during a protest at Black Lives Matter Plaza near the White House which lasted late into the night.

In the video, the unidentified woman – wearing black leggings and a crop top with a printed face mask and hat – stands in front of two black male cops holding a sign reading ‘Police the Police’.

This white woman was seen telling a black police officer to ‘smile for Breonna Taylor’ and telling two other black officers ‘they are a part of the problem’ at a D.C. protest on Tuesday 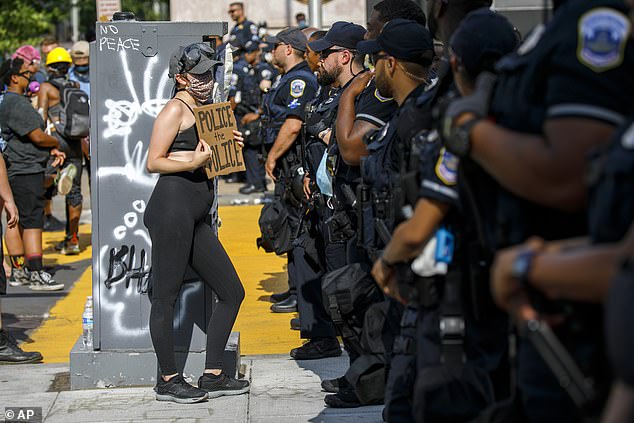 ‘Why don’t you take off your uniform? Are you afraid of police?’ she asks but the officers do not respond and continue looking straight ahead.

Rodgers then interjects and asks the woman: ‘I have a question for you. You’re white and you’re telling this to two black police officers? Don’t you see the problem with that a little bit?’

The protesters whips round to face Rodgers and declares that she can ‘fight for justice’ even if she is white.

‘No, I don’t,’ she says to Rodgers’ question. ‘Just because I’m white and I haven’t experienced racism myself doesn’t mean I can’t fight for justice.’

‘Just because they’re black doesn’t mean they’re not a part of the problem. I’m allowed to say this to whoever. Because I’m white, racism is a white person’s problem. 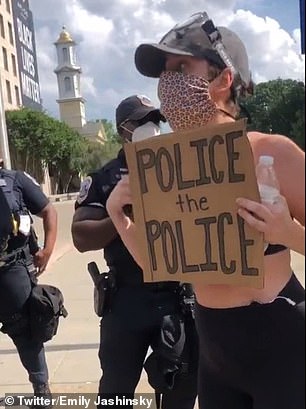 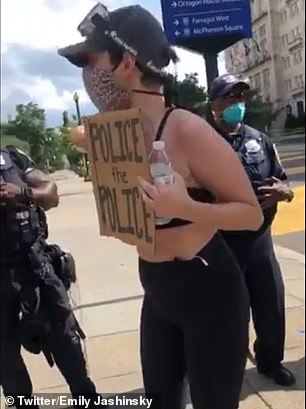 Henry Rodgers, a senior congressional correspondent for The Daily Caller, asked the woman, pictured above, why she as a white person was criticizing the black cops to which she said ‘they’re a part of the system’ and that she could still ‘fight for justice’ if she is white 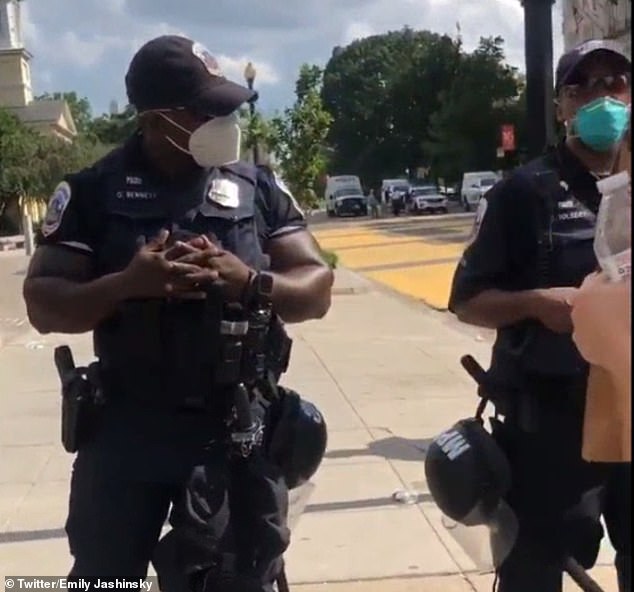 The woman had asked these black officers ‘are you afraid of police?’ during the protest in D.C.

As of Wednesday evening, the video had been viewed more than 2.7million times.

A second video of the same woman showed her confronting a third cop at the same protest.

Posted on Twitter by Emily Jashinsky, a culture editor for conservative online magazine, The Federalist, she wrote that ‘a white woman (in lululemon) tells a black cop’ to ‘smile’.

The second video sees the protester standing directly in front on the female officer and holding her phone in her face, telling the cop to ‘Smile for Breonna Taylor’. 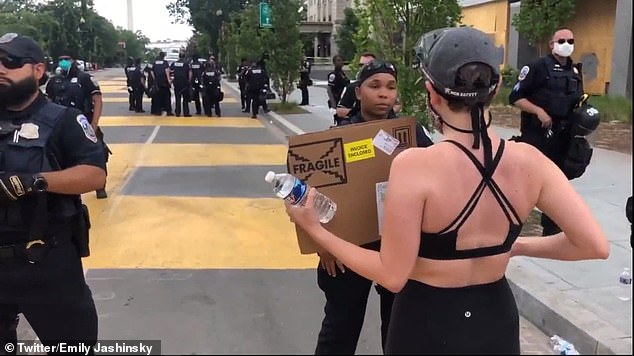 The unidentified protester also held her camera up to this black officer at Tuesday’s protest and said to ‘smile for Breonna Taylor’. The cop did not respond to the white woman

The protesters steps back a moment to look at her phone before returning to stand in front of the cop.

The officer does not respond but slightly shifts on her feet.

According to Newsweek, 15.5 percent of U.S. law enforcement officers are Black.

He called those in question ‘lowlifes’ and said that Congress should act to stop them.

Rodgers posted other videos of the protesters Tuesday in which fireworks were shown just blocks from the White House.

Another group of protesters gathered in Lincoln Park vowed to return Thursday night to tear down the Emancipation Memorial which depicts a freed slave kneeling at the feet of President Lincoln. 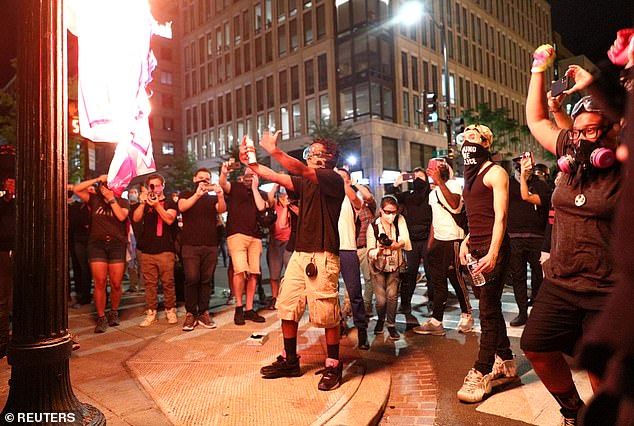 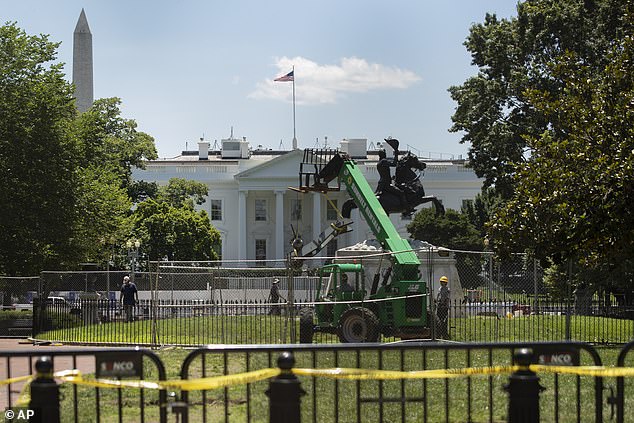 Concrete barriers were also installed around the White House in an effort to protect a statue of Andrew Jackson which police had prevented protesters from bringing down on Monday.

On Wednesday, hundreds of National Guard members were deployed to stand guard at the Capitol’s monuments, Fox News reported.

Speaking on condition of anonymity, the government sources said the number of National Guard troops mobilized is in the low hundreds and none have been deployed to the streets yet.

It comes after President Donald Trump pledged to take a hard line on anyone destroying or vandalizing U.S. historical monuments and threatened to use force on some protesters on Tuesday.