Thousands of protesters could descend on Downtown Phoenix tomorrow as Preident Donald Trump makes his first visit to Arizona since winning the White House.

A combined 5,600 people have said they plan to attend, judging from RSVPs on two Facebook advertisements for anti-Trump rallies.

One features a logo incorporating the number ’45’ – Trump is the 45th US. president – in a mockup of the Nazi swastika. The other includes a graphic of Trump with Ku Klux Klansmen, and is advertised under the title ‘White Supremacy Will Not Be Pardoned.’

That’s a reference to reports that Trump may issue a presidential pardon on Tuesday night to former sheriff Joe Arpaio.

‘If protesters come, they come,’ a White House official told DailyMail.com on Sunday. ‘The president isn’t going to change who he is or what he’s doing because of loud and obnoxious people who are never going to like him no matter what.’ 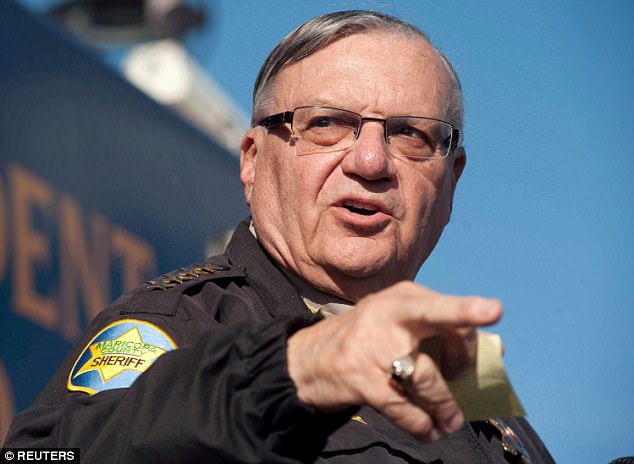 Speculation is running wild about a possible presidential pardon for former sheriff Joe Arpaio, who faces six months in prison for defying a judge’s order in 2011 to stop racial-profiling arrests of suspected illegal immigrants 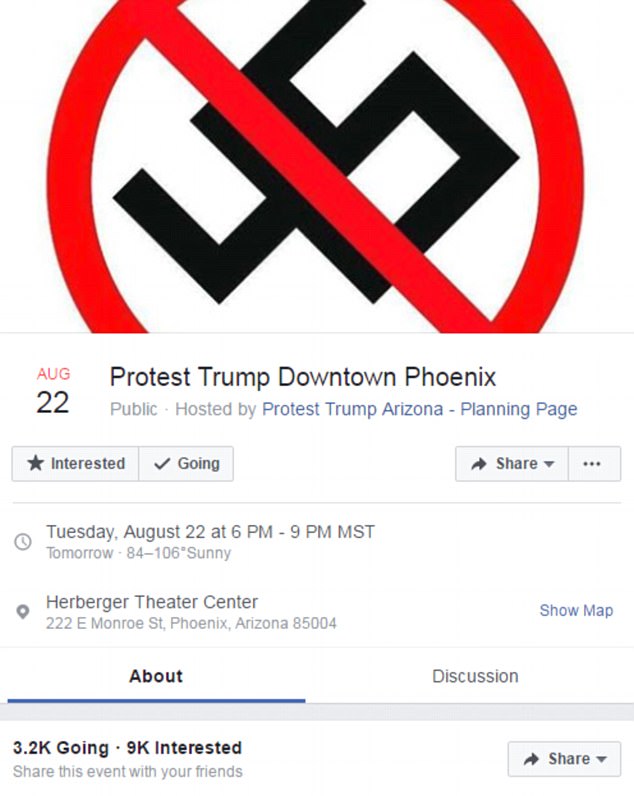 The largest Facebook group organizing an ait-Trump protest has 3,200 RSVPs and uses a logo combining the Nazi swastika and the number ’45’; Trump is America’s 45th president

‘I am seriously considering a pardon for Sheriff Arpaio,’ the president said a week ago, talking to the Fox News Channel. ‘He has done a lot in the fight against illegal immigration. He’s a great American patriot and I hate to see what has happened to him.’

He could face six months in federal prison when he’s sentenced in October.

In an interview Thursday, Arpaio told NPR that he would welcome a Trump pardon.

‘It makes me feel good that at least someone is backing me up. And how much better can you get than president of the United States?’ Arpaio said.

‘As far as the situation on a pardon, I didn’t ask for it but I will accept it if he does do it.’

It would be highly unusual to offer Oval Office clemency to a convict who hasn’t even launched a legal appeal. 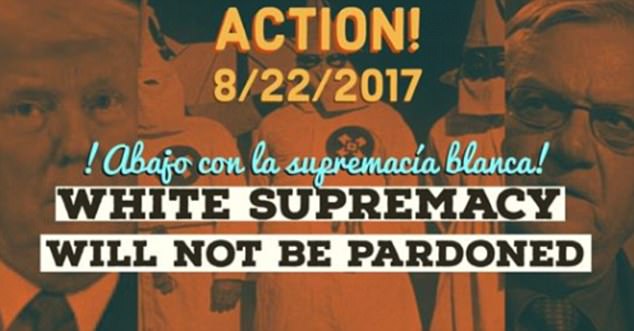 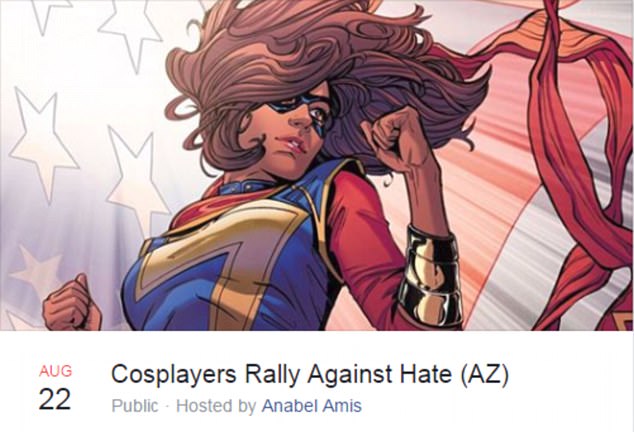 Most pardons happen after a lengthy review process, and typically don’t come until at least five years after opportunities for appeal have been exhausted.

The Trump administration has yet to hire an attorney to supervise the procedure.

Pardon or not, protesters will be out in force on Tuesday night, and some who don’t live in Arizona have taken the unusual step of registering for rally tickets with no intention of using them – in an attempt to shrink the size of the crowd that actually shows up.

The ‘Protest Trump Downtown Phoenix’ Facebook group, this week’s largest, provides a link to the ticketing Web page, ‘if you want to make sure there are a lot of empty seats — or if you want to protest inside.’

Trump’s campaign organization has responded already to the ’empty seats’ protest, according to a source with knowledge of the situation, by increasing the number of available tickets beyond what the Phoenix Convention Center can hold.

Trump’s previous visits to Phoenix have drawn liberal activists out of the woodwork to loudly deride him as a hateful racist. 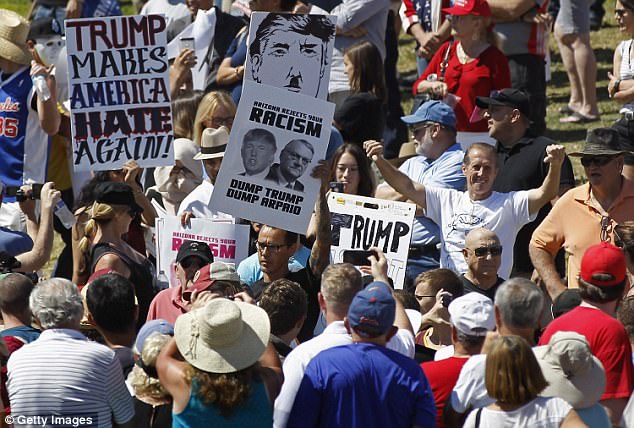 Trump’s last Phoenix appearance was an immigration speech nearly one year ago. About 500 protesters gathered to demonstrate against him, and Tuesday’s numbers could be ten times that size 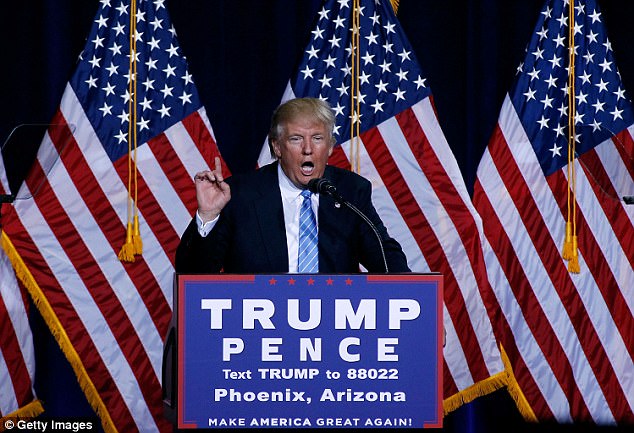 In that August 2016 speech, Trump outlined many of the immigration policies that he has already formally proposed during his first seven months in office

In March 2016, demonstrators blocked the only road leading to a suburban rally site, delaying it while police arrested people forming a human blockade to stop cars from reaching the venue.

Five months later, Trump came back to the Arizona capital to deliver a major immigration speech. Protesters again were out in force, but this time faced a larger law enforcement presence.

About 500 anti-Trump protesters showed up for that demonstration. Tuesday’s display of anti-Trump discontent could be more than 10 times that size.

Trump pleged in that speech to build a wall on America’s southern border, and to hire 5,000 additional border patrol agents to enforce immigration law.

The flow of illegal immigrants has dramatically slowed this year, even without a single new hire.

He also promised to suspend the issuance of visas to people in countries that lack adequate vetting – a move he tried to bring to fruition the week after his inauguration with a ‘travel ban’ that was largely upheld by the Supreme Court.

Trump vowed then ‘to select immigrants based on their likelihood of success in U.S. society, and their ability to be financially self-sufficient.’

He would empower the U.S. to ‘choose immigrants based on merit, skill and proficiency,’ a philosophy he backed up last week with a new policy.

While he rattled off a laundry list of proposals, protesters outside sang folk songs in Spanish and chanted loudly: ‘Whose streets? Our streets!’

Near one street corner, a man carrying a portable ‘boom box’ stereo blared a rap song by YG & Nipsey Hussle whose lyrics repeated over and over: ‘F**k Donald Trump!’

On Tuesday at least one unconventional group of activists will show up to protest. A Facebook group called ‘Cosplayers Rally Against Hate (AZ)’ promises a small contingent of people in superhero and Disney princess garb.

‘Nothing beats Captain American standing on your side against Nazis!’ the group’s page proclaims.