Donald Trump’s chief of staff has said he expects charges to be filed following an investigation into the conduct of the probe into collusion with Russia, adding: ‘It’s time for people to go to jail’.

In his three months in the role, he has strongly emphasized an investigation begun in May 2019 by John Durham, U.S. attorney for Connecticut, into the Russia inquiry.

Durham is expected to present his finding soon.

‘I think the American people are expecting indictments,’ Meadows told Fox News. ‘I know I expect indictments based on the evidence I’ve seen.’ Meadows, pictured with Trump on July 10, is the fourth chief of staff in this administration

Bill Barr, the attorney general, said earlier this year that Durham’s findings have been ‘very troubling’ and that familiar names are currently being probed.

No names have officially been confirmed.

Meadows praised Lindsey Graham, the South Carolina senator currently serving as chair of the Senate judiciary committee, for helping to drive the pace of Durham’s inquiry.

On Friday Graham’s committee released declassified documents suggesting that senior FBI officials were initially skeptical of the emerging narrative, early in Trump’s presidency, that his campaign was in contact with Russian intelligence officers.

‘Lindsey Graham did a good job in getting that out,’ said Meadows.

‘We know that they not only knew that there wasn’t a case, but they continued to investigate and spy. 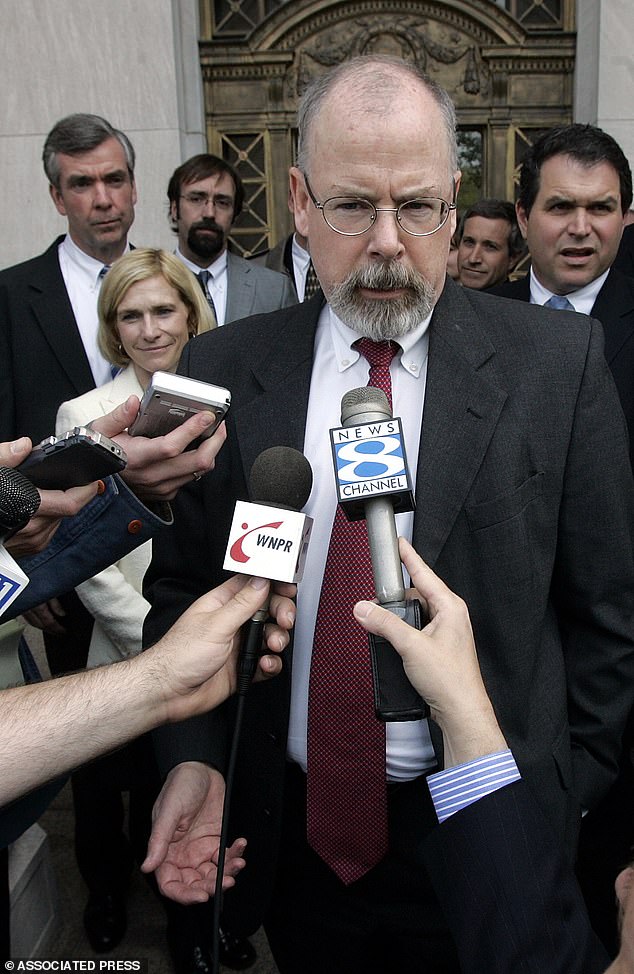 ‘And yes, I use the word spy on Trump campaign officials and actually even doing things when this president was sworn in.

‘And after that and doing in an inappropriate manner, you’re going to see a couple of other documents come out in the coming days that will suggest that not only was the campaign spied on, but the FBI did not act appropriately as they were investigating.’

The investigation into the Trump campaign’s potential collusion with Russia was dubbed Crossfire Hurricane.

The investigation was officially opened on July 31, 2016, and ended with the publication of Robert Mueller’s report.

Durham has been tasked with finding out why Crossfire Hurricane began, and whether it was legitimate.

Meadows said he believed Durham would conclude that the Obama administration overstepped its authority.

‘It’s all starting to come unraveled,’ he said. ‘It’s all unraveling.

‘And I tell you, it’s time that people go to jail and people are indicted.’

On Sunday morning Trump was tweeting about Durham’s inquiry, urging a speedy resolution.

‘So we catch Obama & Biden, not to even mention the rest of their crew, SPYING on my campaign, AND NOTHING HAPPENS?’