The White House claimed victory for the president on Monday afternoon as Democrats agreed to a compromise to reopen the government roughly 60 hours after it flew off a fiscal cliff.

At the top of her daily briefing, press secretary Sarah Huckabee Sanders read a statement aloud from President Trump that said he was ‘pleased that Democrats in Congress have come to their senses’ so that they can now work toward ‘solving the problem of very unfair illegal immigration.’

Sanders then claimed that Trump deserved credit for the end of the standoff because he stood ‘firm’ while Democrats took a position that ‘frankly was indefensible’ and had to back off from it.

‘What the president did clearly worked,’ she said of his decision to give Democrats the silent treatment until the standoff ended.

The White House claimed victory for the president on Monday afternoon as Democrats agreed to a compromise to reopen the government roughly 60 hours after it flew off a fiscal cliff. ‘What the president did clearly worked,’ White House Press Secretary Sarah Huckabee Sanders said

Trump did not speak to Senator Chuck Schumer again after a conversation Friday that preceded the government shutdown. In fact, he did not speak to any Democrats in either chamber over the weekend.

Throughout the entire government shutdown, the United States ‘negotiator-in-chief’ was absent from the public eye, except for a few tweets deriding Democrats, although the White House says he spoke to members of his cabinet and a few Republicans.

Just before a seminal in the upper chamber on Monday to determine the duration of the shutdown, senators from both parties threw their support behind a bill that would authorize government funding through Feb. 8.

The measure passed 81-8 paving the way for the current lapse in funding to come to an end.

‘I would say that those numbers are much more in the president’s favor than in Sen. Schumer’s favor,’ the president’s spokeswoman declared at her news conference. ‘I’m not sure what changed for him and what he gained.’

As part of the agreement, Senate Majority Leader Mitch McConnell pledged to allow open debate on immigration bills that legislators from both parties have been pushing. Lawmakers have two and a half weeks now to come up with a bill that their counterparts in the House and President Trump can stomach.

On Monday afternoon, the White House dug in its heels and said that Trump would not sign legislation unless it fully funds his border wall.

Sanders would not take a definitive position, though, on what he would be willing to offer Democrats in terms of protections for Dreamers.

Trump remained silent as the conversations on immigration began to play out, not even tweeting about potential legislation.

The president disappeared behind closed-doors on Friday afternoon and had not reappeared by the time first votes were cast on Monday.

He made no public appearances from Friday afternoon on as legislators hammered out a deal, leaving it to senior aides like Office of Management and Budget Director Mick Mulvaney to push his position.

‘He has stepped back from those negotiations,’ Mulvaney said in a Monday morning appearance on Fox News, claiming that Trump had shifted gears’ since the shutdown began. ‘He’s gone from negotiating to running the government.’ 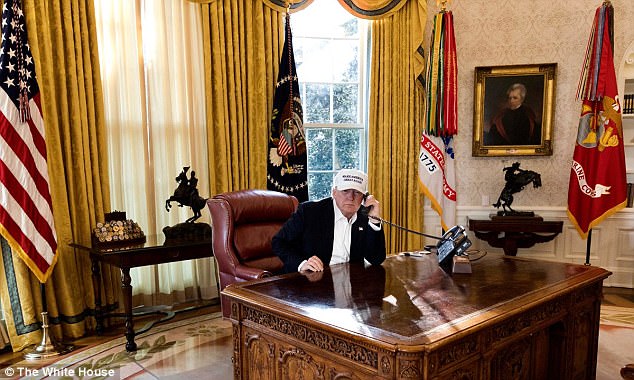 As the government shutdown unfurled, the United States ‘negotiator-in-chief’ President Donald Trump disappeared behind closed-doors for nearly 72 hours. This hand-out photo distributed by his White House and one other were the only times he was ‘seen’

Occasional tweets, statements on his activities and hand-out photos distributed by his White House were the only signs of life for the head of the executive branch over the weekend.

‘Democrats have shut down our government in the interests of their far left base. They don’t want to do it but are powerless!’ a message from Trump on Monday morning said. ‘End the Democrats Obstruction!’ he proclaimed hours later.

His advice on Sunday over Twitter was that Senate should do away with the filibuster to make way for a simple, 51-vote procedure that could pass without any support from Democrats.

A staged photo of Trump in the Oval Office on Saturday was provided by the White House as evidence of that.

‘The great deal-making president sat on the sidelines,’ Schumer declared in a Monday afternoon floor speech just before the Senate voted to pass a resolution that would restart funding for the the government.

The president was pointedly isolating Schumer and everyone else in the opposing party, the White House said, in an attempt to bend the other side to his will.

On Good Morning America the White House Press secretary said ‘that different circumstances call for a different type of leadership.’

‘He’s been incredibly engaged. He’s spent a lot of time on the phone,’ Sanders asserted. 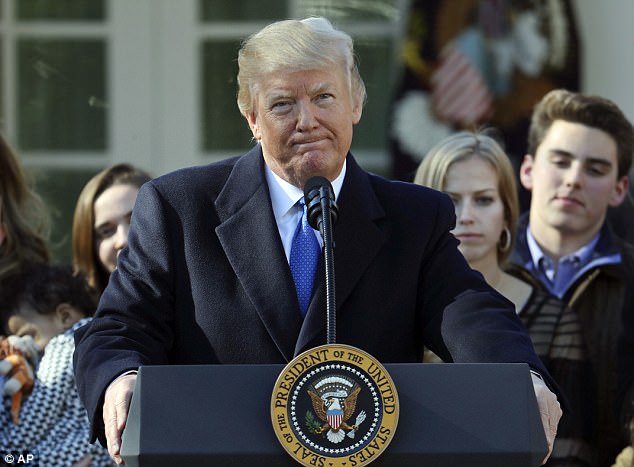 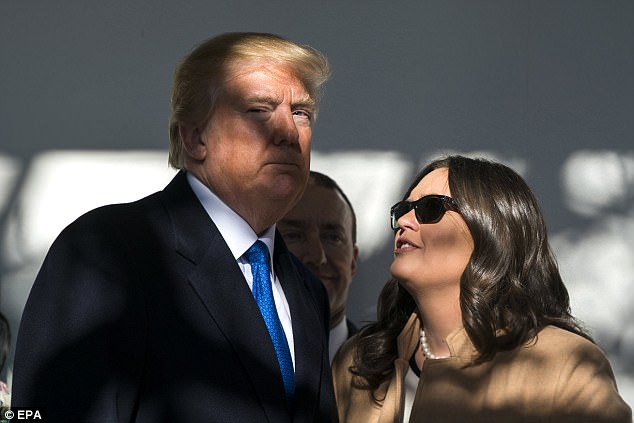 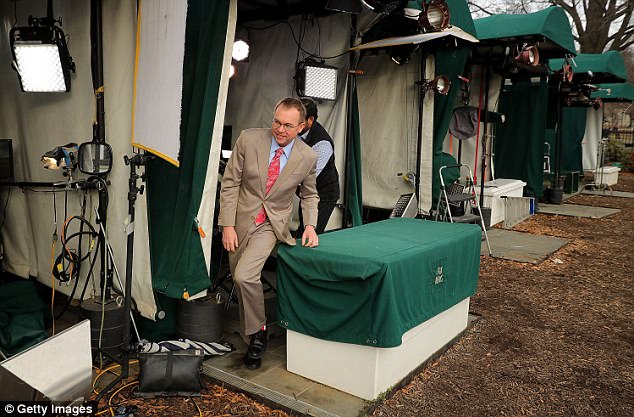 Later in the day at the White House as she was swarmed by reporters after appearing on a television network, Sanders insisted that Trump had done a ‘great job.’

The Trump spokeswoman said it routinely falls on staff to communicate on behalf of the president.

‘He is focused on managing the shutdown. That’s the biggest part of the process that he plays at this point,’she said. ‘One, is encouraging members to do the right thing and reopen our government. The other part is to manage the pieces.’

As it was, Legislative Affairs Director Mark Short was the senior official tasked with coordinating with lawmakers from the Democratic Party.

Schumer said the agreement that came about today was brokered despite the ‘glaring absence of the president’ in the process.

The leading Senate Democrat said Trump had not spoken to him since an in-person conversation Friday at the White House.

Both men came away from the talk believing that they had made ‘progress’ only to find hours later that they were not on the same page after all.

The government shutdown on Friday evening at midnight when a continuing resolution to keep it open failed to muster enough support from Republicans or Democrats to clear the Senate.

With an hour and a half to do go until the Senate vote on Monday morning to jump-start operations, Sanders argued that Trump had stayed out of the fray because ‘Democrats aren’t exactly reliable players in this process.’

‘Certainly not honest brokers,’ she said. ‘And we’re looking for more…honest conversations where you can actually move the ball forward, and his attempt on Friday, I think with Sen. Schumer showed that he may not be the most honest broker in this process.’

Occasional tweets, statements on his activities and hand-out photos distributed by his White House were the only signs of life for the head of the executive branch over the weekend

Schumer claimed all weekend in floor speeches and press statements that he and Trump had agreed on the contours of a deal only to have White House Chief of Staff John Kelly call him later to slap it down.

He claims that he offered Trump all of the money he was requesting for his border wall.

‘Sen. Schumer’s memory is hazy because his account of Friday’s meeting is false,’ Sanders rebutted in a Sunday statement. ‘And the President’s position is clear: we will not negotiate on the status of unlawful immigrants while Sen. Schumer and the Democrats hold the government for millions of Americans and our troops hostage.’

Senator Lindsey Graham – a Republican at the forefront of negotiations – singled out White House senior advisor Stephen Miller as the wayward staffer pulling Trump away from a deal and sending the entire federal government over the fiscal cliff.

A Democratic member of Congress involved in the talks told DailyMail.com that Miller and Kelly were both to blame for the breakdown in talks.

Rebutting the accounts on Monday, specifically the ones about Miller, Sanders said: ‘I think that’s a sad and desperate attempt by a few people trying to tarnish a staffer.’

On Fox she said Graham’s finger-pointing was ‘ridiculous’ and that GOP senator’s comment ‘shows the lengths’ that legislators ‘are going to blame other people for their own failures.’

The White House maintained throughout the shutdown that Democrats were to blame for the mess. 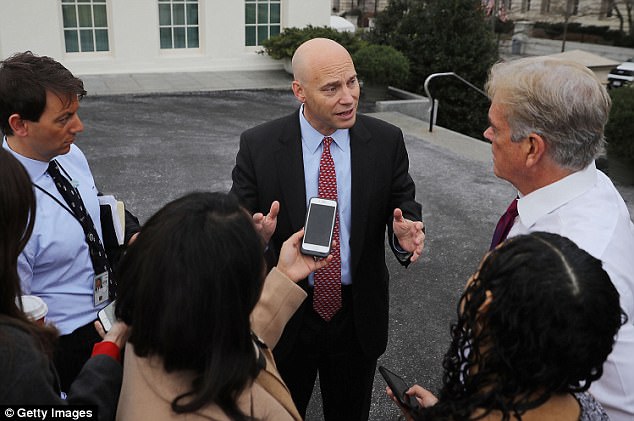 As it was, Legislative Affairs Director Mark Short was the senior official tasked with coordinating with lawmakers from the Democratic Party. Short is seen here talking to reporters outside the White House on Monday

‘They put politics above our national security, military families, vulnerable children, and our country’s ability to serve all Americans,’ a statement read. ‘We will not negotiate the status of unlawful immigrants while Democrats hold our lawful citizens hostage over their reckless demands.’

Turning the screws, the White House statement said: ‘This is the behavior of obstructionist losers, not legislators.

‘When Democrats start paying our armed forces and first responders we will reopen negotiations on immigration reform. During this politically manufactured Schumer Shutdown, the President and his Administration will fight for and protect the American people.’

With Trump out of the picture, Republicans in the Senate ultimately brokered a deal that would allow funds to flow through Feb. 8. It hinged on a promise that immigration talks would commence immediately.

Trump is demanding $20 billion for his border wall and the restriction of companion visas to approved applicant’s nuclear family.

He also wants an end to the diversity visa lottery system that the administration has blamed for the activity in the U.S. of foreign-born terrorists.

Democrats say they want a permanent solution for illegal immigrants who came to the United States in their youth.

According to Schumer, they are willing at this point to accept an agreement that protects the Dreamers and gives Trump the money he’s requested for a wall at the southern border of the United States.