The White House vetoed Australian Prime Minister Scott Morrison from bringing a Hillsong church pastor with him during his visit to the United States.

Mr Morrison asked for Brian Houston to join him on the official visit with US President Donald Trump but was told by White House staff that Mr Houston was not invited, the Wall Street Journal reported.

A Royal Commission censured Mr Houston in 2015 after it found he failed to report to police that his father Frank Houston was a child abuser.

Scott Morrison (pictured) had requested his ‘mentor’ and Hillsong pastor, Brian Houston, join him during his visit at the White House this week. 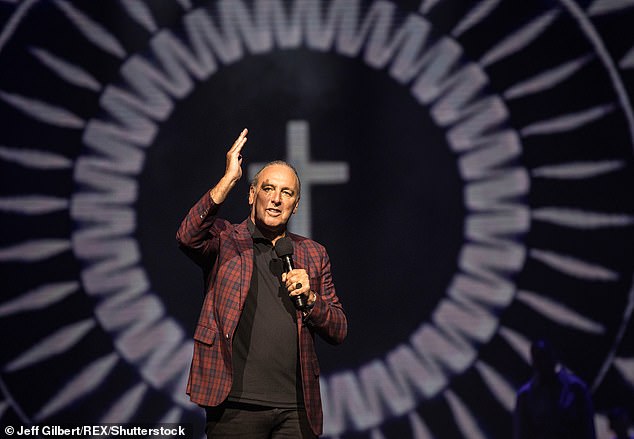 Frank Houston, who died in 2004, admitted to molesting a boy for years beginning when the child was 7 in the 1960s and early 70s.

In 1999, Frank Houston told his son Brian that he had sexually abused the boy.

Brian suspended his father from the church but decided not to tell the police about his father offending, the Sydney Morning Herald reported.

‘We are satisfied that, in 1999 and 2000, Pastor Brian Houston and the National Executive of the Assemblies of God in Australia did not refer the allegations of child sexual abuse against Mr Frank Houston to the police,’ the commissioners wrote in their report.

The boy gave evidence saying Houston would come into his room ‘nearly every night of the week’ to abuse him during visits in 1970.

The victim told the commission he had been left ‘full of shame, fear and embarrassment’ and the abuse by Houston had ‘destroyed his childhood’. 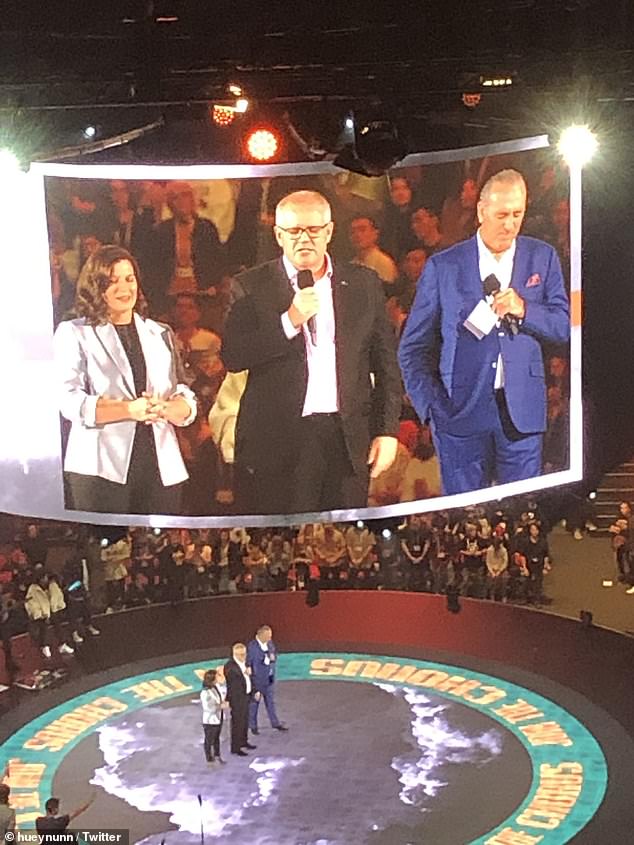 The Prime Minister reportedly agreed not to bring Mr Houston to the White House.

Mr Morrison called Mr Houston his ‘mentor’ during his maiden speech to Parliament in 2008.

In July, Mr Morrison and his wife Jenny appeared at the opening session for the Hillsong annual conference, standing by Mr Houston’s side, claiming Australia needed more love and more prayer.

‘There’s a lot of talk about our freedoms as Christians in this country and they should be protected,’ Mr Morrison said at the conference.

‘There’s nothing more fundamental than freedom of belief.’

The Australian Prime Minister is just the second foreign leader to attend a US state dinner since the Trump administration began three years ago.

The two leaders met for bilateral talks and a joint press conference ahead of the official state dinner on Friday night, held in the White House’s Rose Garden. 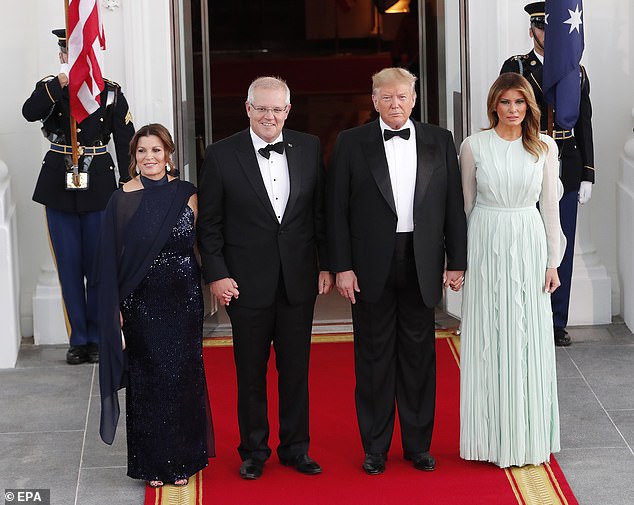 Mr Morrison is the first Australian prime minister to score an invite since George W Bush hosted John Howard in 2006.

Mr Trump paid tribute to Australia and Mr Morrison at the dinner by quoting from iconic poem No Foe Shall Gather Our Harvest.

First published in the Australian Women’s Weekly in 1940, the poem featuring a stirring call to patriotism was penned by Mr Morrison’s great-great aunt Dame Mary Gilmore, who is on Australia’s $10 note. 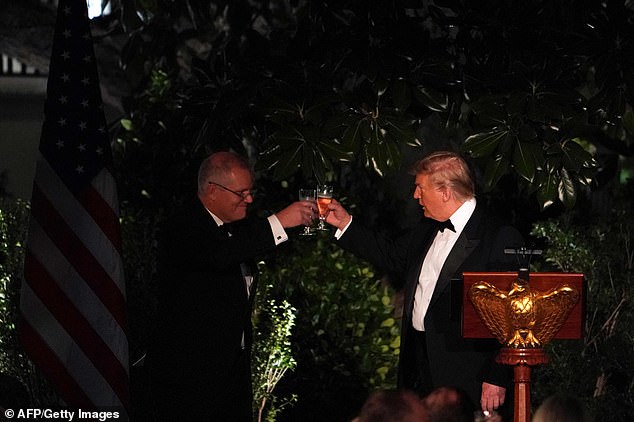 ‘We are the sons of Australia, of the men who fashioned the land; We are the sons of the women who walked with them hand in hand; And we swear by the dead who bore us; By the heroes who blazed the trail,’ Mr Trump quoted from the poem.

In reply, Mr Morrison paid tribute to the warm hospitality from the U.S President and First Lady during his speech where he praised the US president’s ‘belief in America and its people’.

‘Thank you so much Mrs Trump for the amazing night you’ve created for us here,’ Mr Morrison said. 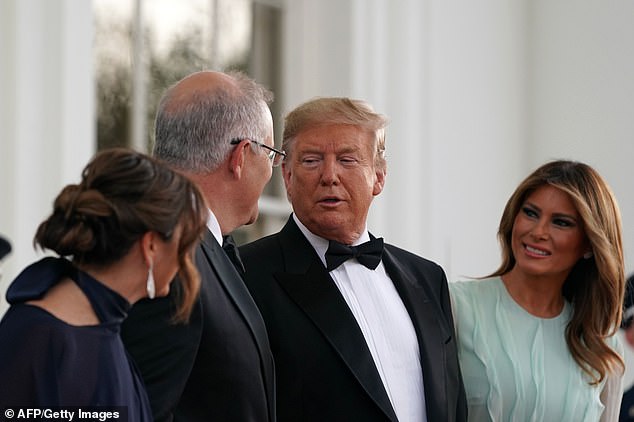 ‘Mrs Trump, your kindness, warmth and quiet grace with a welcome to Jenny and I tonight has been very special.’

He also celebrated the long-standing alliance between Australia and America, toasting to ‘100 years of mateship and to 100 more’.

‘Australia will never be accused of indifference in our friendship with the United States,’ Mr Morrison said.

‘Tonight we are reminded that the United States feels the same way, especially under your leadership.’ 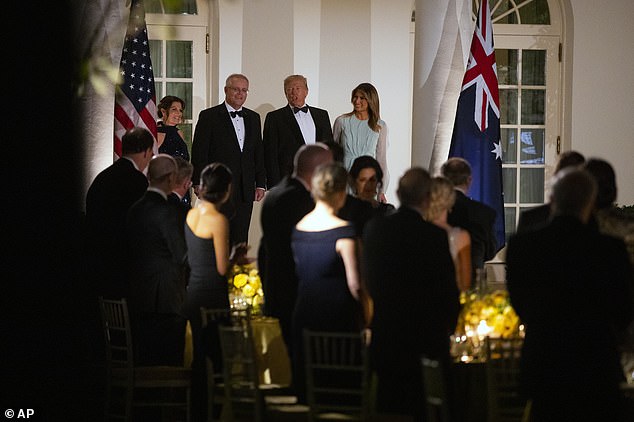 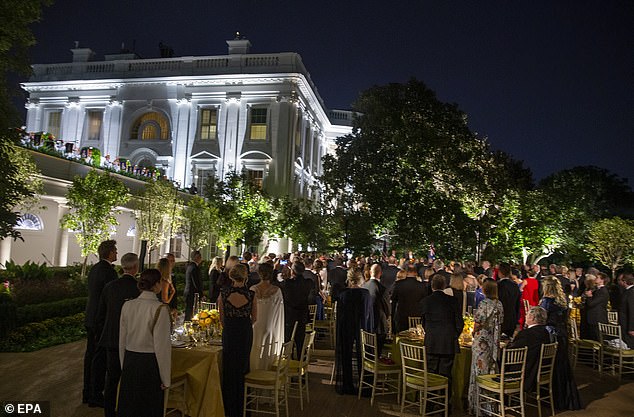 Guests at the black-tie affair feasted with ravioli with cream and vegetables, dover sole and apple pie with ice cream