White House staff were told Monday they must wear a mask at all times when they enter or move around the building, after a coronavirus cluster started at the president’s home.

All workers in the West Wing were told by email that they only time they can take off their masks is when at their desks and as long as they are socially distanced at the time. They are also discouraged from inviting in guests, ABC News reported.

The move is a dramatic walk back of weeks of the White House ignoring its own CDC guidance that masks reduce the chance of infection spreading.

But the memo did not say if Donald Trump would lead by example, while Vice President Mike Pence arrived for work Monday without wearing a mask.

The White House was scrambling to deal with a coronavirus crisis in its own corridors after Donald Trump’s valet and Mike Pence’s press secretary both tested positive for the disease.

Mike Pence was set to return to the White House Monday. On Friday, a top aide to the vice president tested positive for the coronavirus

Tested positive after suffering symptoms and is now off work. Trump claimed to have had ‘very little contact’ with him

Tested positive May 8, the day after going to a nursing home without wearing a mask. Now self-quarantining but her husband Stephen Miller is not. Unclear who she contracted virus from

Self-isolating after contact with Katie Miller. Says it will be ‘modified’; will give evidence to the Senate by video link

Self-isolating after contact with Katie Miller. Was tested and is negative

Dr. Robert Redfield, head of the Centers for Disease Control and Prevention, member of the coronavirus task force

Self-isolating after contact with Katie Miller. Says he will come to White House if required

Extensive contact with Katie Miller but says he is not self-isolating. Went to Iowa after she tested positive for meeting where others were asked to remove masks

Some contact with Katie Miller but is not self-isolating

General Joseph Lengyel, Chief of the National Guard Bureau and a member of the Joint Chiefs of Staff

Tested both positive and negative; did not attend Saturday meeting of the president and the Joint Chiefs of Staff

Self-quarantining for a week after coming into contact with a family member who tested positive; did not attend Saturday meeting of the president and the Joint Chiefs of Staff

Despite the potential that he was exposed to the virus, Pence went to his office in the Old Executive Office Building (OEB) Monday after speculation on Sunday that he would go into self-quarantine.

But he chaired a coronavirus task force conference call with governors from a room alone, while other officials stayed in the Situation Room, ABC News reported.

‘Many of you heard that we had a couple of staff members that tested positive,’ he told participants as he explained why he was by himself.

His aide Katie Miller tested positive on Friday after displaying symptoms on Thursday, when she went with the vice president to a nursing home near Washington D.C., and neither wore masks.

Her contacts were traced Friday. As well as being Pence’s press secretary, she is spokeswoman for the coronavirus task force which he leads.

That prompted Dr. Tony Fauci to go into ‘modified’ quarantine, along with the FDA commissioner Dr. Stephen Hahn and the CDC director, Dr. Robert Redfield.

But Pence ‘has tested negative every single day and plans to be at the White House,’ spokesman Devin O’Malley said in a statement.

Pence’s decision to come to work comes as the White House takes steps to continue to project an image of resolute action despite it now being the nation’s most high-profile center of infection – with Kevin Hassett, one of Trump’s economic advisers calling working there ‘scary’ and saying he’d be ‘safer at home than in the West Wing.’

The new policy comes just minutes before the president was to hold a news conference where some of his top advisors are sidelined and Pence was not expected to attend. And it comes a day before a Senate hearing titled: ‘COVID-19: Safely Getting Back to Work and Back to School.’

All four key witnesses are to testify remotely, as is Senate Health Education Labor and Pensions chair Lamar Alexander, who was exposed to someone who an aide who tested positive.

President Trump had revealed Friday that Miller, who is married to his immigration adviser and speechwriter Stephen Miller, had tested positive for the coronavirus.

Pence and his team learned about the test on Friday shortly before he was to fly to Iowa for an event – an event he undertook without a mask.

The list of impacted people grew on Monday, when Iowa’s Republican Gov. Kim Reynolds announced that she would be undergoing a ‘modified quarantine plan’ after learning she was in contact with Miller, the Washington Post reported. She was notified this weekend that the aide was present when she visited Washington.

CNN reported Monday that it was still not known how Katie Miller had become infected.

It does not appear she had been in close contact with the White House Navy valet who tested positive last Wednesday.

He has not been named, but his contact with other West Wing staff appears to have been limited.

But the two cases did prompt changes in the White House Monday.

The Secret Service agents charged with safeguarding the president will finally begin wearing protective masks – even as the president himself continues to shy from the practice.

The agents are among many people who work in the White House complex who are preparing to undertake new precautions after two people who work there tested positive for the virus – as a senior official admitted it was ‘scary’ to go and work at the building.

White House aides – almost all of whom have declined to wear masks even as the White House and the Centers for Disease Control encouraged Americans to start using them – may now undertake new social distancing measures while at work, ABC News reported.

Agents who are close to the president or who are near the Oval Office will don the masks, according to the report – which follows news that a valet who has been in close proximity to Trump tested positive for the coronavirus.

A measure under consideration is to have White House aides stand six feet apart, a key CDC recommendation to prevent the spread of the virus – including during their meetings with the president.

That requirement has been part of normal life for Americans for weeks, but had not been enforced at the White House.

However people scheduled to meet with Trump  – a self-described germophobe – will continue to be tested.

For weeks, outsiders who came to the White House to meet with Trump have been tested.

Reporters who attend White House briefings were tested on one occasion, but now must undergo only temperature checks before participating and entering the White House complex.

In recent days reporters at White House briefings have kept masks on, but staff including new press secretary Kayleigh McEnany have not. 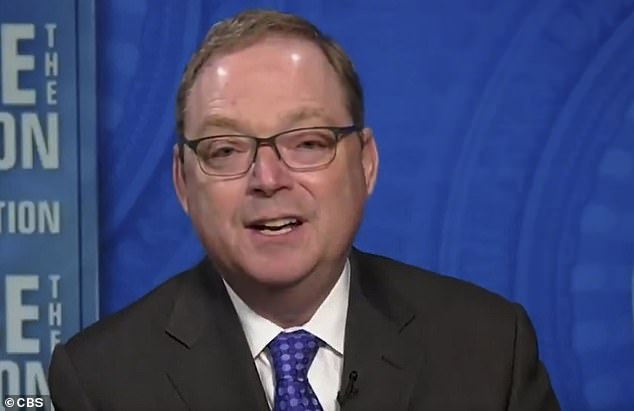 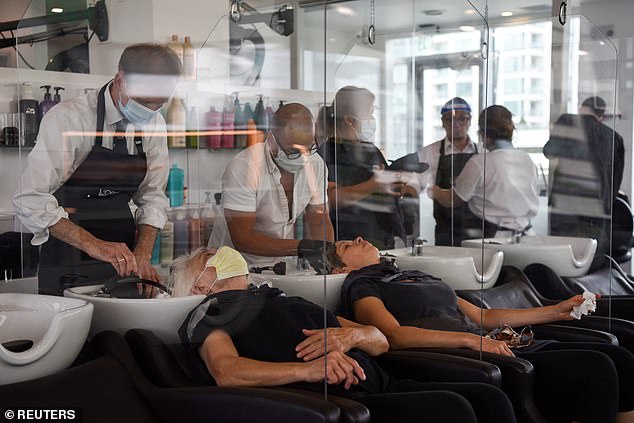 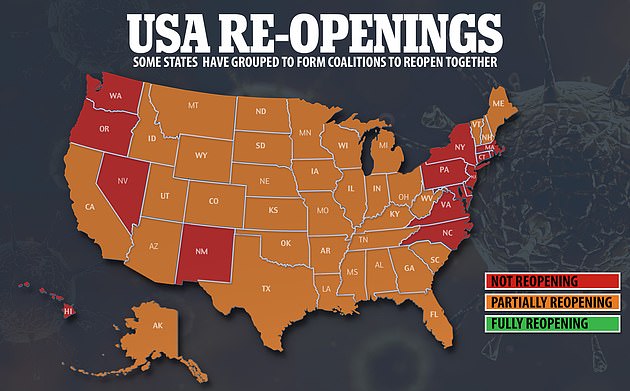 However one of Donald Trump’s top economic advisers admitted Sunday that it’s ‘scary’ to think about going back to work, voicing his own concerns about working at the White House in the midst of the pandemic.

Even amid growing infection rates and deaths across the country, White House officials have avoided embracing mask protocols. Last Tuesday, when Trump flew to Arizona, aides including Hope Hicks, Jared Kushner, and Dan Scavino walked closely off Marine One without wearing masks.

‘I’ve got a mask right here,’ Hassett said. ‘And the fact is that I practice aggressive social distancing. I’ll wear a mask when I feel it’s necessary.’

Trump’s Democratic challenge Joe Biden turned the White House’s crisis into a political attacking, blasted the Trump administration for failing to line-up adequate testing for the coronavirus for the nation, but trying to make the West Wing safe.

‘It’s been more than two months since Trump claimed that ‘anybody that wants a test can get a test.’ Biden wrote in a new op-ed in the Washington Post.

‘The administration is fully aware that this is the right path, too — after all, the president and his staff are now reportedly receiving daily tests.

‘They knew exactly how to make the Oval Office safe and operational, and they put in the work to do it. They just haven’t put in that same work for the rest of us.’

Without testing, he wrote, the nation cannot go ahead with the phased reopening taking place.

‘If we’re going to have thriving workplaces, restaurants, stores and parks, we need widespread testing. Trump can’t seem to provide it — to say nothing of worker safety protocols, consistent health guidelines or clear federal leadership to coordinate a responsible reopening,’ he wrote.

Biden cited Friday unemployment figures, which give the nation the highest unemployment since the Great Depression, saying the task called for ‘urgent, steady, empathetic, unifying leadership.’ 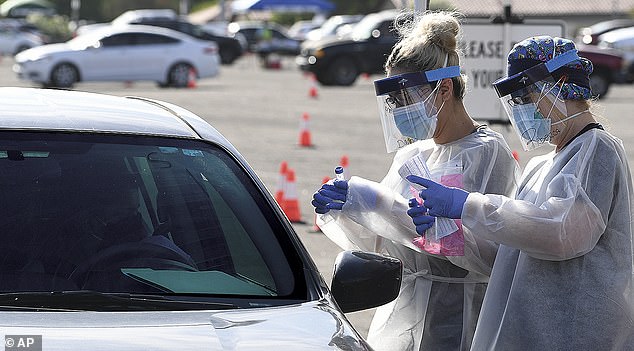 Yuma Regional Medical Center registered nurses Daena Zamora, left, and Rebecca Adame work with one of the participants during the YRMC COVID-19 “Testing Blitz” in the Yuma Civic Center parking lot, Saturday, May 9, 2020, in Yuma, Ariz.

Trump has repeatedly hailed testing in the U.S., saying at the end of April it was ‘much better than any other country in the world.’

Trump also tweeted: ‘The only reason the U.S. has reported one million cases of coronavirus is that our testing is sooo much better than any other country in the world.

‘Other countries are way behind us in testing, and therefore show far fewer cases,’ he claimed.

The U.S. has more than 1.3 million coronavirus cases, more than any country in the world.

Public health experts have said the nation needs to ramp up testing as it reopens to identify people who have the infection and isolate them to keep them from spreading it.

The nation has been testing about 250,000 people per day, although experts at Harvard’s Global Health Institute have proposed more than 900,000 per day, amid a nationwide call to ramp up contact tracing to track down those who came in contact with infected people.