White House insiders say that President Donald Trump is not talking about bringing Rob Porter back into the fold, even though a report this week said so.

Corey Lewandowski, the president’s campaign manager in the primary election and an outside adviser to Trump, told CNN on Thursday that he was not aware of any conversations that had taken place with the former White House staff secretary.

Another source close to the White House told DailyMail.com that it hasn’t come up in conversation, either, and that an inquiry brought the same answer. 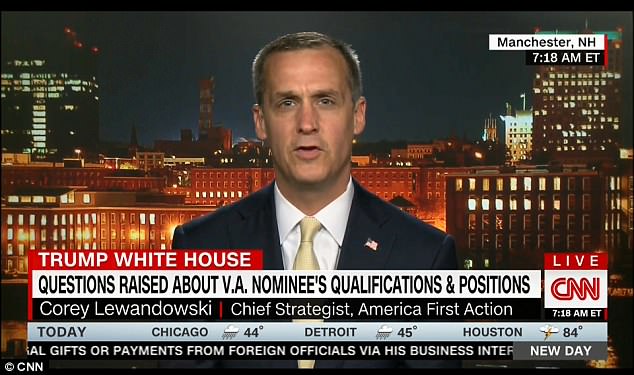 Corey Lewandowski, the president’s campaign manager in the primary election and an outside adviser to Trump, told CNN on Thursday that he was not aware of any conversations that had taken place with the former White House staff secretary

The White House said Tuesday that there are ‘no plans’ to rehire the former aide who was accused of domestic abuse by his two his ex-wives after Trump reportedly mulled a new position for Porter.

The men stayed in contact with Porter when he left the White House last month and phone calls between the pair have increased in recent weeks, sources told the New York Times.

White House Press Secretary Sarah Sanders denied Tuesday that they had been in communication that often. But she did not slam the door on the possibility that Porter could return.

‘There are no plans for him to come back,’ she said of the report. ‘They have spoken once. I am not aware of any other conversations beyond that.’ 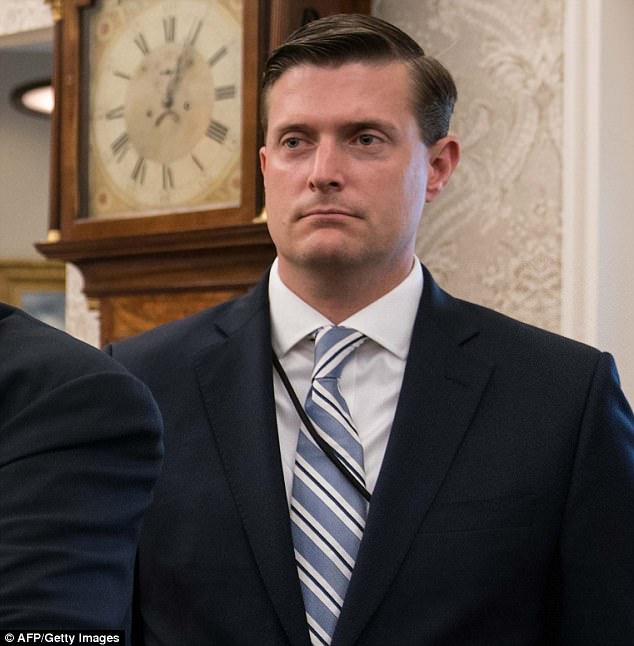 Porter left his White House position in early February after DailyMail.com published photos of and details about the abuse he allegedly inflicted upon his two ex-wives.

White House Chief of Staff John Kelly initially defended Porter as a ‘man of honesty and integrity’ before backing away from him.

The senior White House official has suggested on multiple occasions since that he directed Porter to leave, even though Sanders and her deputy said numerous times from the podium that the high-ranking Trump aide was leaving of his own account.

Trump also came under scrutiny during the scandal for his deference to Porter, who he said had denied the allegations leveled against him.

‘He did a very good job when he was in the White House and we hope he has a wonderful career, and hopefully he will have a great career ahead of him,’ Trump said in the Oval Office of Porter’s resignation.

‘Now, he also, as you probably know, he says he’s innocent. And I think you have to remember that. He said very strongly yesterday that he’s innocent.’

The incident led to a broader debate about security clearances within the White House — Porter’s background check was still being processed when he departed. Kelly ultimately stripped other aides in limbo such as Jared Kushner, the president’s son-in-law, of their top-level clearance. 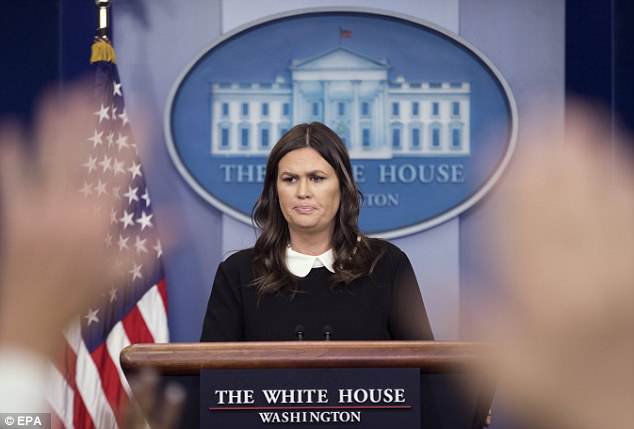 White House Press Secretary Sarah Sanders denied Tuesday that they had been in communication that often. But she did not shut the door completely on Porter’s return

Sources told the Times that Trump is aware that he cannot bring Porter back for that and other reasons, although he does want the ex-staffer to return to the White House.

Trump does not like to exile his former staffers because he considers them an extension of himself in that they are often criticized, the article said, with sources telling the Times that Trump considers Porter to be one of those people.

In the phone calls they have reportedly had since Porter left, the pair is said to have discussed trade and the China tariff’s Trump announced last week.

A White House official, speaking on background, told the Times that Trump misses the staff structure that Porter helped organize.

Both of Porter’s ex-wives — Jennie Willoughby and Colbie Holderness — came forward in February with claims that they had been abused by the White House official during their marriages. 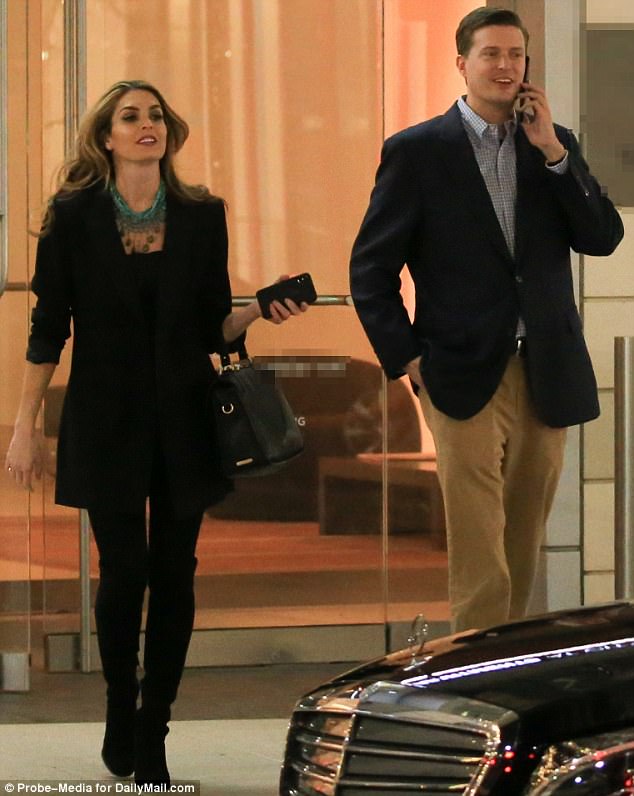 Porter, who was dating former White House communications director Hope Hicks (above together in February) when the abuse revelations surfaced, has reportedly stayed in contact with Trump since leaving 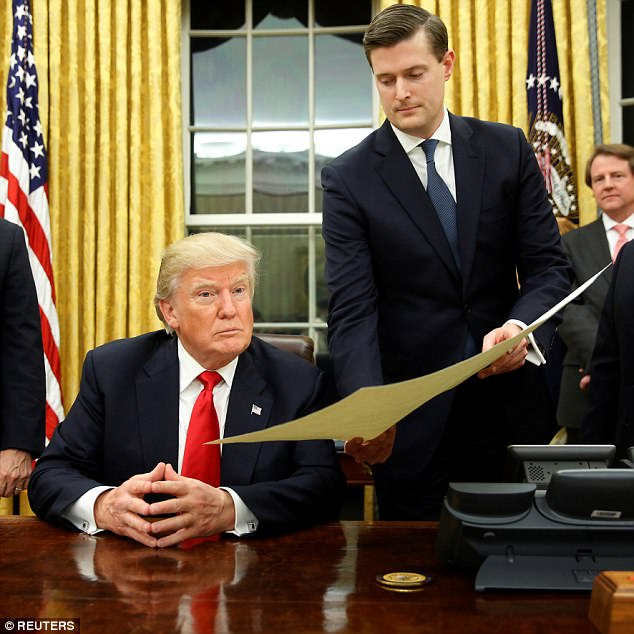 The Times sources say Trump has told some advisers that he while he knows he cannot bring Porter back, he hoped his ex-staffer would return to the White House. They are pictured above together in January 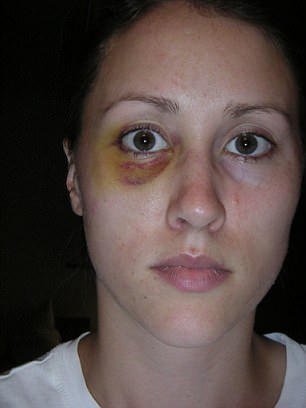 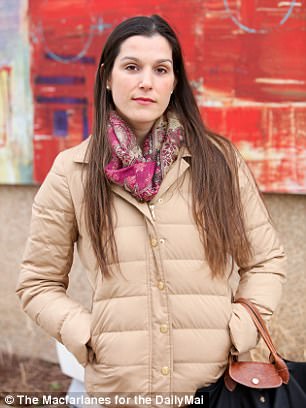 Porter resigned from his position as staff secretary after DailyMail.com published photos of bruises that his first wife, Holderness, said he gave her during their marriage.

Holderness claims Porter choked and punched her during their marriage, while Willoughby says he dragged her wet and naked out of the shower and was verbally abusive, calling her a f***ing b***h’ on their honeymoon.

Porter denied both of the women’s accusations but resigned while protesting his innocence, anyway.

The controversy embroiled the White House, where senior aides, including chief of staff John Kelly, were reportedly made aware of the allegations against Porter in November.

Holderness and Willoughby said they spoke to the FBI during its standard background check on the White House official who was seeking a government security clearance for his high-level position.

FBI Director Christopher Wray testified to Congress that he provided the White House with an update on Porter’s case in November before closing the file in January.

The allegations delayed Porter’s ability to get long-term clearance. He was granted interim clearance when he joined the White House in January 2017.