Workers at the White House completed repairs Tuesday on the sinkhole that had developed on the North Lawn, leaving a band of shiny green grass where a dark hole once stood.

The sinkhole was filled with gravel and dirt.

Then workers laid strips of fresh grass across the top of it and gave it a good watering to get it off to a good start in the 90 degree heat Washington DC has been experiencing.

A worker on the North Lawn of the White House waters the freshly-laid grass placed over a repaired sinkhole on Tuesday afternoon. 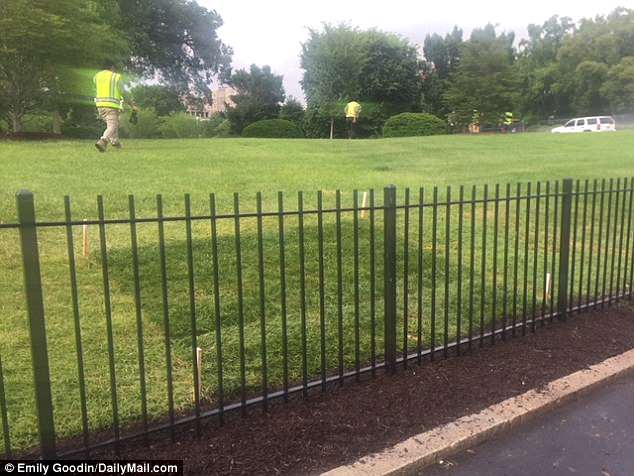 Repairs on the sinkhole were completed Tuesday afternoon and fresh green grass covered an area on the White House lawn where a dark hole once stood. 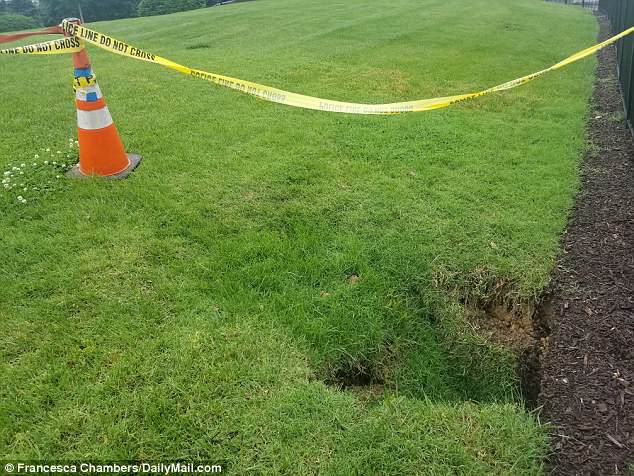 The bright green grass that covers the hole stands in stark contrast to the rest of the White House lawn.

The sinkhole that popped up on the White House lawn outside the press briefing room appeared one year after a sinkhole appeared in front of President Donald Trump’s Mar-A-Lago home.

The sinkhole became a social media sensation after its appearance last week.

Shortly after its shot to stardom, the White House instituted a cover up – literally. A large, green board was placed over it last week, which was removed when workers began repairs on Friday.

The new sinkhole, which could have formed because of a record amount of rain in Washington DC this month, came one year to the date a large sinkhole showed up in front of Trump’s Mar-a-Lago estate in Palm Springs, Fla., last year.

The 4’x4′ hole appeared near a newly installed water main and led to numerous social media posts full of jokes and metaphors about the president.

Sinkholes are depressions or holes in the ground caused by some form of collapse of the surface layer. They vary in size and appear suddenly and without warning.

Washington D.C., originally built in a murky swamp that had to be drained to make the area inhabitable, has received at least 6.14 inches of rain in May, more than what fell in the previous two months combined.

‘Draining the swamp’ has become a common colloquialism to refer to getting corruption out of the government.

The internet also had fun with the sinkhole’s appearance with one wit asking if it was an escape route for First Lady Melania Trump. 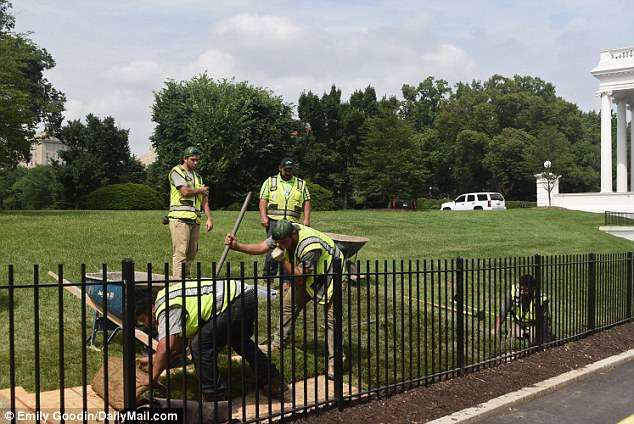 Workers filled the hole with gravel and dirt. Then they laid fresh strips of grass over it. 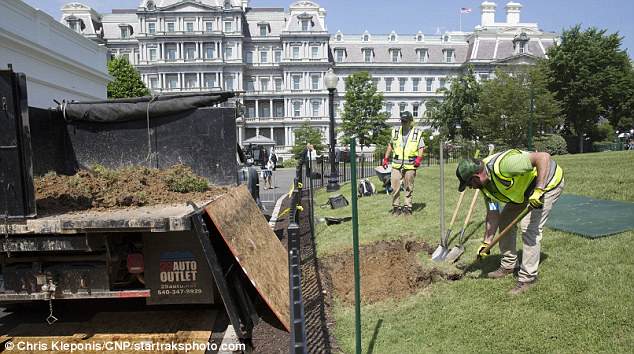 The sinkhole became a social media sensation after its appearance last week. 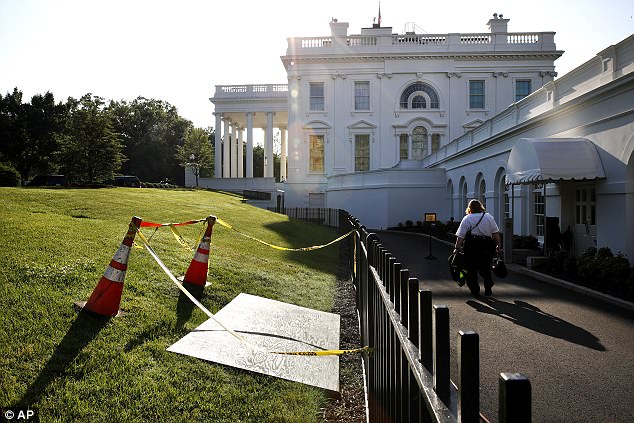 Shortly after the sinkhole shot to stardom, the White House instituted a cover up – literally. A large, green board was placed over it.

Late night comedian Jimmy Kimmel got in on the action, also joking it was a way for the first lady to escape.

‘It is very interesting and weird, because exactly one year ago today, a sinkhole opened at Mar-a-Lago. And now there’s one outside the White House,’ Kimmel said.

‘I’m starting to think maybe God’s aim is slightly off.’

‘Are we sure this is a sinkhole and not one of Melania’s escape tunnels?’ he asked.