White House Press Secretary Stephanie Grisham is departing her post without ever having briefed the press corps – and will return to a key role in the office of First Lady Melania Trump.

She will be replaced by Kayleigh McEnany, a Trump loyalist who has vigorously defended the president at his campaign rallies and in TV interviews. It was unclear Tuesday whether McEnany would resume the daily press briefings that were once a mainstay of the high-profile press secretary position.

Grisham will give up her role to serve as the first lady’s chief of staff, days after it was revealed that new White House Chief of Staff Mark Meadows had begun discussing her possible replacement and plotting a shakeup.

Kayleigh McEnany will be named White House press secretary, after serving as spokeswoman for the Trump presidential campaign

Grisham began her role last summer, but never briefed White House reporters from the podium of the briefing room. In recent weeks, President Trump has been personally briefing the press on the latest developments in the coronavirus response. Trump held court for two hours on Monday, as U.S. deaths in the outbreak passed 10,000.

The first lady’s office confirmed Grisham’s switch in a statement.

‘I am excited to welcome Stephanie back to the team in this new role,’ said Melania Trump in her statement. ‘She has been a mainstay and true leader in the Administration from even before day one, and I know she will excel as Chief of Staff.’ 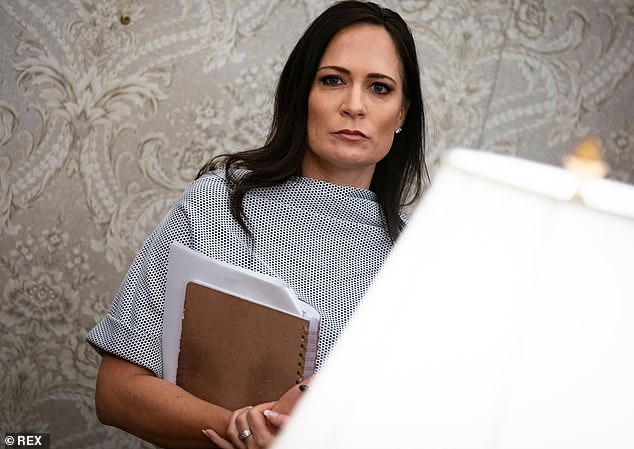 ‘If true, how ironic that the press secretary would hear about being replaced in the press,’ said White House press secretary Stephanie Grisham, in a statement about new chief of staff Mark Meadows discussing her possible replacement

‘I continue to be honored to serve both the President and First Lady in the Administration,’ said Grisham. She said she would stay in the west wing ‘to help with a smooth transition for as long as needed.’

CNN reported Tuesday the move is part of a broader communications shakeup. The network reported that McEnany would move into the press secretary role, while Pentagon spokeswoman Alysa Farrah would serve as the communications director. Grisham and McEnany did not immediately respond to requests for comment.

Meadows is also bringing on his chief of staff from his congressional office to the communications team, according to the New York Times.

The Personnel moves come days after it was reported that Meadows had privately discussed the possibility of replacing Grisham – who was at home under self-quarantine at the time.

Grisham has been at home following her exposure to a Brazilian official at Mar-a-Lago March 7 who later tested positive for the coronavirus. A day earlier, President Donald Trump announced on Twitter that Mulvaney would be his new chief of staff, replacing Mick Mulvaney.

McEnany has been a vocal defender of Donald Trump’s at his campaign rallies. Also focused on getting out Trump’s message through TV hits around the country. 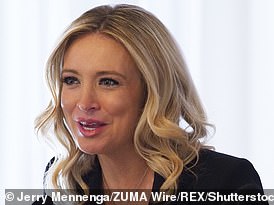 She holds a Harvard Law degree and previously served as press secretary for the Republican National Committee. It was not immediately clear if she would resume the practice of press briefings by the press secretary. She is married to Sean Patrick Gilmartin, 29, a Major League Baseball relief pitcher for the Tampa Bay Rays. He also pitched for the Mets and the Orioles.

Alyssa Farah – communications director. Farah is a former aide to Vice President Mike Pence who is a spokeswoman at the Pentagon. She previously worked for Meadows as communications aide to the former House Freedom Caucus chair. She had an $11,000 tax lien placed on her Washington, D.C. home in 2017, according to records. 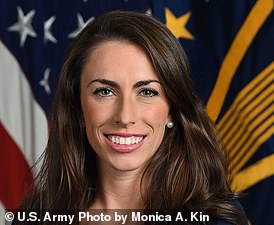 Stephanie Grisham – chief of staff to First Lady Melania Trump. Grisham served as press secretary for nine months. She did not hold a White House press briefing, although she sat for numerous interviews on Fox News and other conservative outlets. She previously worked closely with the first lady as her press secretary. She traveled extensively with Donald Trump during the 2016 presidential campaign. 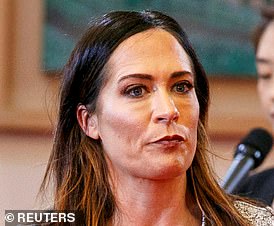 Grisham, whose decision to self-quarantine following contact with the Brazilian delegation was reported March 17, gave a statement days ago that did not deny the possibility of a change.

‘Sounds like more palace intrigue to me, but I’ve also been in quarantine. If true, how ironic that the press secretary would hear about being replaced in the press,’ she told the publication.

Grisham also serves as White House communications director, so it is not clear whether Meadows would bring in additional person to fill that traditional role. The communications director typically focuses on broader messaging issues, although as Grisham and her predecessors have made clear, it is President Trump who designs his own press strategy.

In just a flash of how the president likes to operate, on Sunday there was no scheduled press briefing. He tweeted out during the afternoon that he might hold one, then took the podium with little notice and fielded questions about the coronavirus and his response.

Grisham did not immediately respond to a request for comment.

Grisham has been criticized for failing to hold a single press briefing during her tenure, even while conducting multiple TV interviews with Fox News and conservative outlets.

She took over after predecessor Sarah Sanders had virtually ended the White House briefing, a Washington ritual that forces the White House to confront a range of questions about political and policy decisions.

Grisham has countered that President Trump has made himself accessible to media in other ways. As the coronavirus outbreak has begun to hit in full force, Trump has taken over daily briefings at the White House along with the coronavirus task force.

The president seems to embrace the responsibility, holding a session that exceeded two hours Tuesday, and has bragged online about how many people are watching.

Farah, 30, was communications director in Meadows’ office when he was an influential conservative voice and head of the House Freedom Caucus.

Meadows has also spoken about Trump campaign spokesperson Kayleigh McEnany as a potential contender. She conducts multiple TV interviews that were established around Trump rallies before the virus caused the campaign to cancel the frequent events. She holds a Harvard Law degree and previously served as press secretary for the Republican National Committee.

Grisham, 43, bonded with Trump as a member of his small campaign staff, then served as deputy to press secretary Sean Spicer before becoming spokeswoman for First Lady Melania Trump. 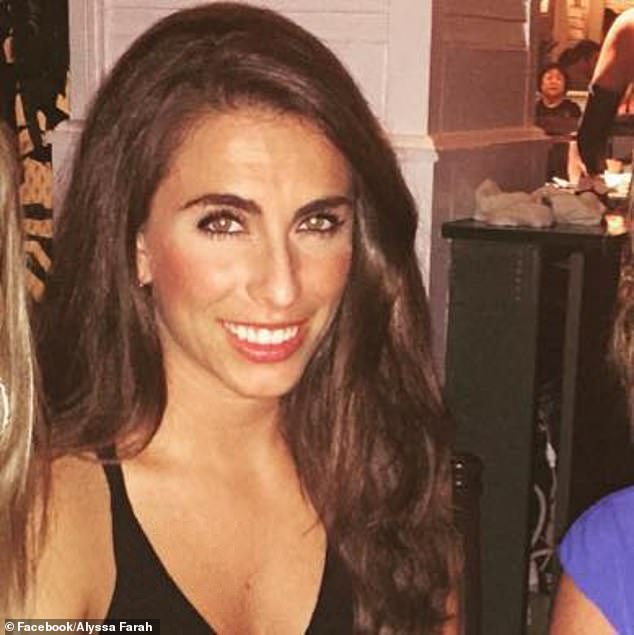 Meadows has spoken about bringing on Pentagon spokeswoman Alyssa Farah 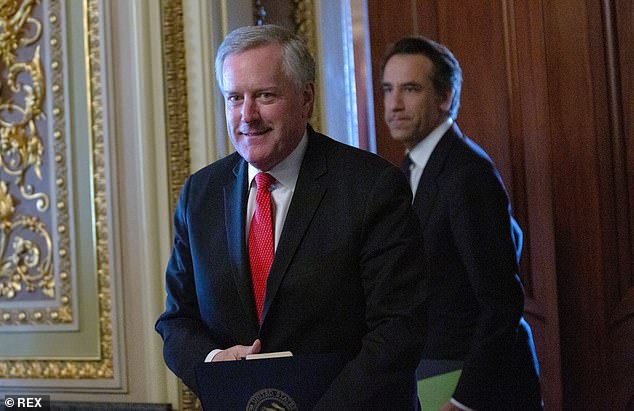 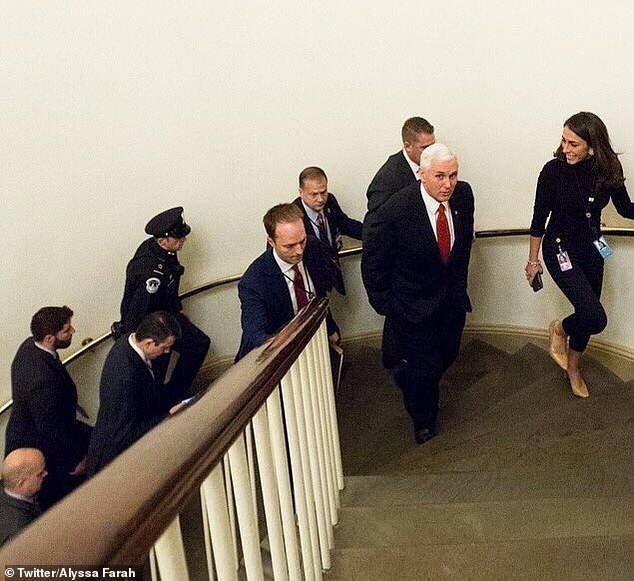 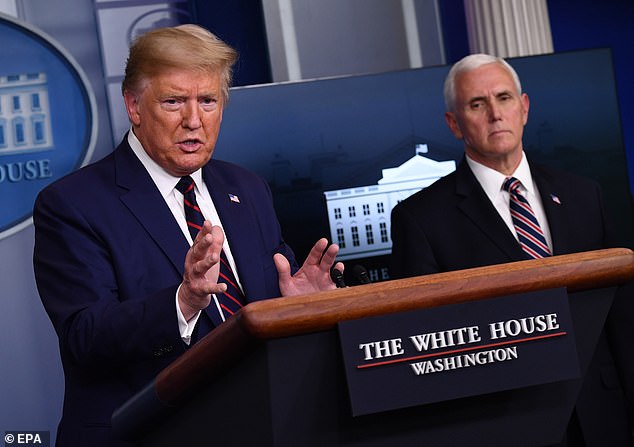 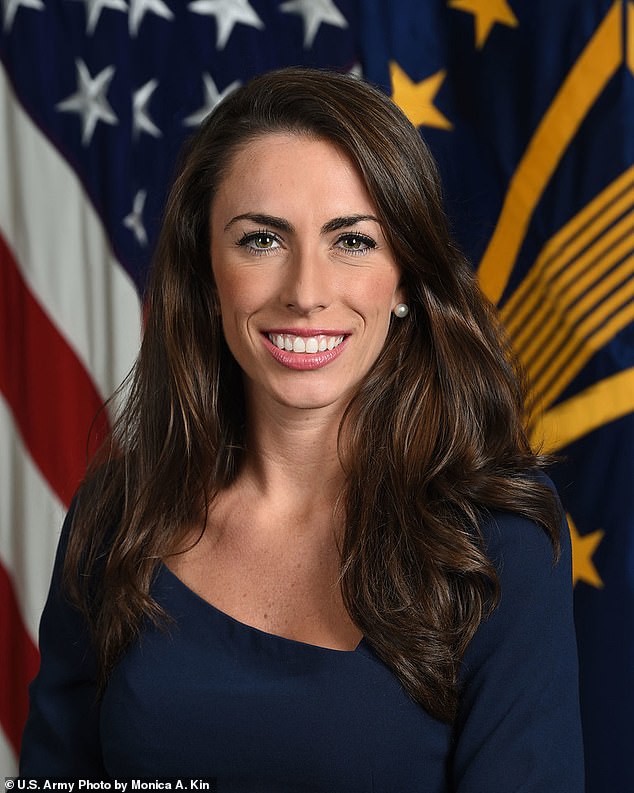 Alyssa Farah, Department of Defense Press Secretary and Deputy Assistant Secretary of Defense for Media Affairs, poses for her official portrait in the Army portrait studio at the Pentagon in Arlington, Va., Sept., 30, 2019

Grisham will replace Lindsay Reynolds, who was named Melania’s chief of staff in February 2017, shortly after President Trump was sworn into office.

Grisham and Reynolds ‘hate each other,’ a source familiar with the East Wing told DailyMail.com. The person also noted Reynolds ‘fights with everyone’ although tensions between staff in the East Wing and staff in the West Wing are a common feature in both Republican and Democratic administrations.

Reynolds was one of the few White House staffers with previous experience in the building. She was associate director of the White House Visitors Office under President George W. Bush.

And she is the daughter-in-law Mercer Reynolds, a big time Republican fundraiser. She was an elementary school teacher before she joined the Bush administration and ran an event planning business before coming to the Trump White House.

Reynolds’ family – including her husband and three children – stayed in Ohio while she worked for the first lady. Reynolds commuted back-and-forth from Cincinnati, balancing her government work with her family life.

‘Lindsay did a great job helping Mrs. Trump get settled in,’ said Anita McBride, who was chief of staff to Laura Bush and knew Reynolds in that administration.

‘She has been there before,’ McBride told DailyMail.com, adding ‘she knew her way around the White House.’

Grisham never severed her ties to the East Wing, serving as the first lady’s spokesperson in addition to her West Wing roles.

And, despite her move across the building from her spacious East Wing office to the high-profile press secretary’s office, which is just down the hall from the Oval Office, Grisham and Melania Trump stayed close, speaking to one another frequently.

Grisham joined the Trump team during the 2016 campaign, when she served as press wrangler for Donald Trump.

That experience could come in hand as the first lady has vowed to campaign for her husband in his bid for re-election. She was scheduled to do fundraisers in Beverly Hills, California, and at the Winter White House in Mar-a-Lago before the coronavirus outbreak halted travel.

Melania Trump was not well served during the 2016 race, when she drew fire for giving a speech at the Republican National Convention that drew from an earlier speech given by Michelle Obama. A staffer took the blame and apologized.