The White House says it is ‘actively’ preparing for President Trump’s ‘expected summit’ with Kim Jong-un on June 12 in Singapore.

Trump called off the face-to-face talks last Thursday but said over the weekend he hoped they would still take place on the original date.

This morning he thanked North Korea for the ‘solid’ response to his letter that threw the planned, upcoming summit into turmoil, as negotiators arrived in New York to continue talks.

‘We have put a great team together for our talks with North Korea. Meetings are currently taking place concerning Summit, and more. Kim Young Chol, the Vice Chairman of North Korea, heading now to New York. Solid response to my letter, thank you!’ the president wrote.

Kim is the vice chairman of the Central Committee of the North’s ruling Workers’ Party and former head of his nation’s spy agency. The White House confirmed in a statement this morning that he’d be meeting with Secretary of State Mike Pompeo on Thursday in New York.

A camera crew captured this image of Kim Yong-chol (front) arriving at the Beijing airport on Tuesday. He has reportedly booked a flight on to New York City

Kim is the most senior official from the hermetic nation to visit the U.S. since 2000, CNN reported.

The high-level emissary is close to Kim Jong-un and was seated next to the strongman at a summit last month.

WHO IS KIM YONG-CHOL?

Kim Yong-chol is a vice chairman of the Central Committee of the North’s ruling Workers’ Party and former head of his nation’s spy agency. The high-level emissary is close to North Korean President Kim Jong-un and was seated next to the strongman at summit last month.

He came under U.S. sanctions in 2015, which would require a special waiver for him to come here.

Former Director of National Intelligence James Clapper identified him as having approved the 2014 Sony hack.

North Korea executed the hack in response to the release of the comedy ‘The Interview,’ which dealt mockingly with an assassination attempt on Kim Jong-un.

He is also thought to be behind North Korean torpedo attack on a South Korean navy ship, the Cheonan in 2010. The attack resulted in the deaths of 46 sailors.

He came under U.S. sanctions in 2015, which would require a special waiver for him to come to Washington. Former Director of National Intelligence James Clapper identified him as having approved the 2014 Sony hack. He is also thought to be behind North Korean torpedo attack on a South Korean navy ship, the Cheonan in 2010.

The White House said Tuesday that not only is Kim coming to New York, a U.S. delegation that was meeting with their North Korean counterparts in the Demiliterized Zone between North and South Korea.

The officials were: Sung Kim, the U.S. Ambassador to the Philippines, Allison Hooker, the director for Korea for the national security council and Randy Schriver, assistant secretary of defense for Asian and Pacific Security Affairs at the Department of Defense.

White House Chief of Staff Joe Hagin and an advance team were also in Singapore on Tuesday ‘coordinating the logistics of the expected summit,’ the statement said.

Japanese Prime Minister Shinzo Abe was also making a rush trip to Washington next week on Thursday in advance of the planned talks, the White House announced as it highlighted a flurry of diplomatic activity surrounding the June 12 talks.

Trump spoke to Abe on the phone on Monday and agreed then to meet with him again ‘in advance of the expected meeting between the United States and North Korea.’

‘The President and Prime Minister affirmed the shared imperative of achieving the complete and permanent dismantlement of North Korea’s nuclear, chemical, and biological weapons and ballistic missile programs,’ a readout of the call said.

Official White House communications this week indicated that the meeting between Trump and Kim in Singapore was likely to happen in the latest iteration of the on-again, off-again high stakes meeting.

Kellyanne Conway, counselor to the president, said, however, in a Tuesday appearance on Fox & Friends, ‘Let’s see what happens.’

‘What I’ll tell you is what the president has always said and made very clear in his incredible letter last week which I thought covered the waterfront of how we got here, what was not going to happen and what could happen and they acted immediately,’ she said.

Conway left open the possibility that the summit could be delayed beyond June 12 — something that White House Press Secretary Sarah Sanders has also said since North Korea recommitted to talks ‘any time’ in any format last Friday.

‘Now, this president in letter in that letter last week, I thought really got some kinetic energy going. Folks all of a sudden said wow, this may actually not happen, and if we want it to happen, then we’re going to start moving it,’ Conway said. ‘Ever since then practically, North Korea, South Korea, and the United States have been making very positive moves.

His counselor said, ‘But let’s see what happens, as the president says, if he’s satisfied then it will go forward.’

Trump’s message this morning was that followed days of quiet diplomacy, after the former U.S. ambassador to South Korea traveled to the DMZ for preparation talks.

Trump was referring to his letter to North Korean dictator Kim Jong-un, where the president chided the ‘anger and open hostility’ in a statement that labeled Vice President Mike Pence a ‘political dummy.’

Senior-level talks are proceeding between the US and North Korea, signaling that the proposed summit between President Donald Trump and Kim Jong-un will proceed. 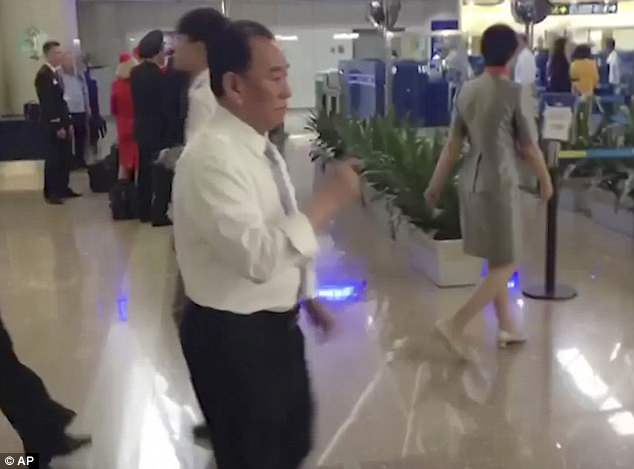 Kim Yong Chol is seen in Beijing on Tuesday. He is a former military intelligence chief who is now Kim Jong Un’s top official on inter-Korean relations

Trump canceled the June 12 summit on Thursday, but then a day later suggested it could be back on track, and the latest White House statement says the meeting is ‘expected’.

The outlet said that Kim Yong-chol had changed his reservations from a Tuesday flight to Washington DC to one going to New York on Wednesday, but it wasn’t clear why.

Kim Yong-chol is banned from entering the US under sanctions against North Korea, indicating that he has been granted a special exemption for the trip. 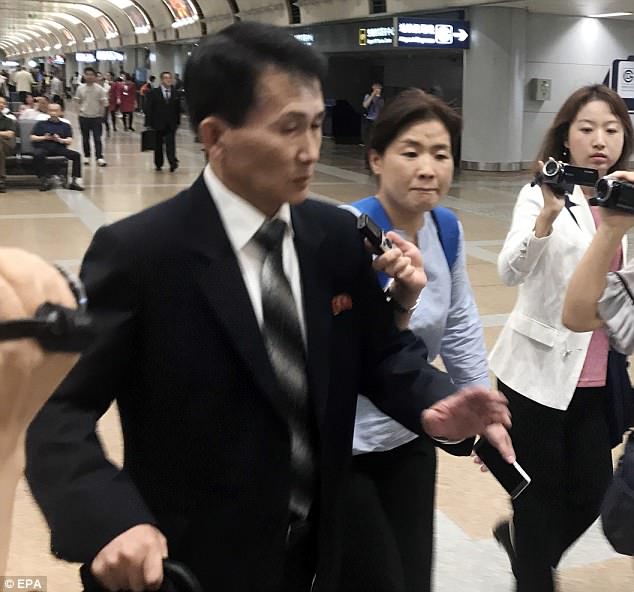 Choe Kang-il, the North Korean foreign ministry’s director-general for North American affairs, walks through Beijing’s international airport in Beijing on Tuesday. He is believed to be accompanying Kim Yong-chol to the US for senior-level talks on arranging a summit 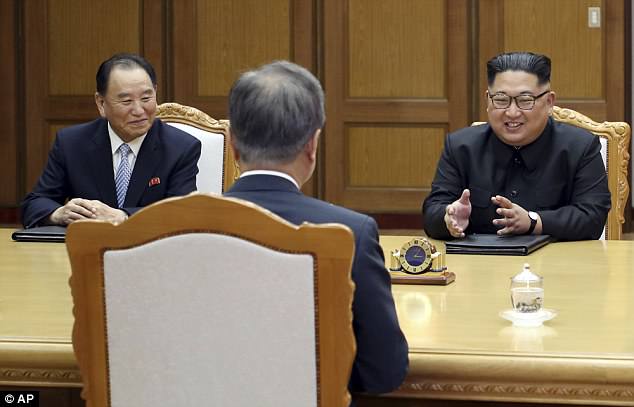 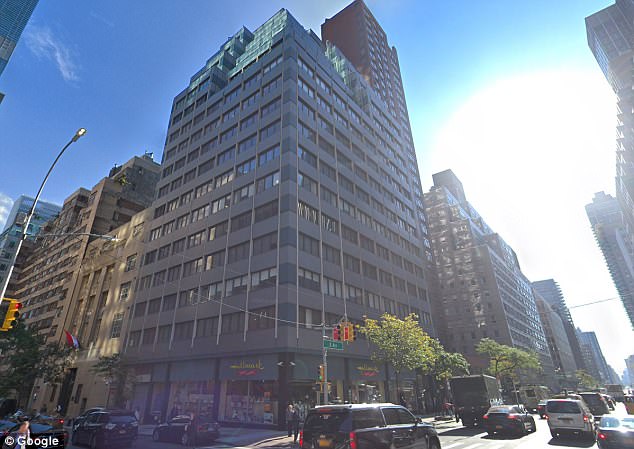 North Korea has a permanent mission to the UN in New York, located on the 13th floor of this nondescript Manhattan office building above a Hallmark Cards store

North Korea does not maintain an embassy or consulates in the US, but does have a permanent mission to the UN in New York, located on the 13th floor of a nondescript Manhattan office building above a Hallmark Cards store.

Kim Yong Chol is a former military intelligence chief and is considered Kim Jong Un’s right-hand man on inter-Korean affairs, attending recent top-level meetings between the North Korean leader and his counterpart from the South.

Choe Kang-il, the North Korean foreign ministry’s director-general for North American affairs, was also spotted in the Beijing airport on Tuesday and is believed to be accompanying Kim Yong Chol to the US.

Meanwhile, White House Deputy Chief of Staff for Operations Joe Hagin arrived in Singapore on Monday, and is leading the ‘pre-advance’ team that will discuss security and protocol issues with the North. An advance team precedes any presidential trip.

A US air convoy consisting of an executive plane and a military C-17 Globemaster III believed to be carrying Hagin’s team stopped over at Yokota Air Base in Japan on Monday.

White House spokeswoman Sarah Huckabee Sanders had said on Saturday that the ‘pre-advance team for Singapore will leave as scheduled in order to prepare should the summit take place.’ 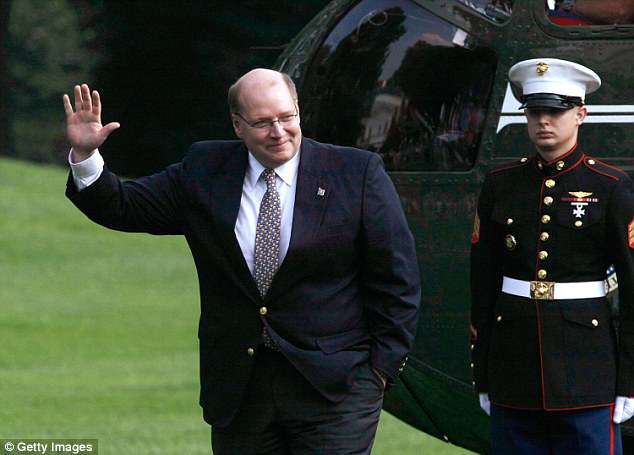 White House Deputy Chief of Staff for Operations Joe Hagin (seen in 2008) arrived in Singapore on Monday, and is leading the ‘pre-advance’ team for a potential summit 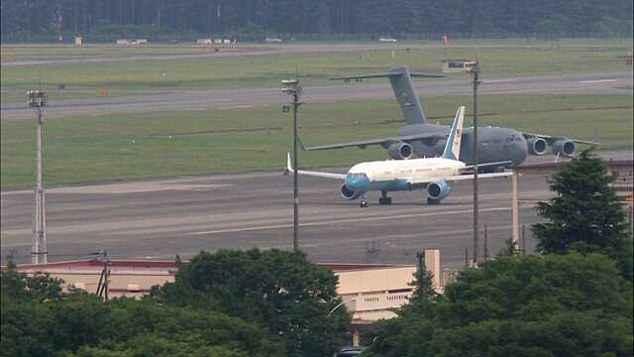 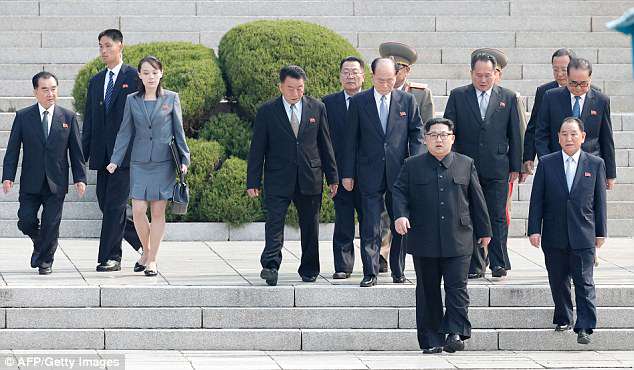 Kim Chang-son is Kim Jong Un’s chief aide, responsible for scheduling, itineraries, protocol and the flow of reports, policy documents and communications to and from the leader.

The high-ranking North Korean official arrived in Singapore fresh off a trip to Beijing to meet with top officials there, according to the Japan Times.

When Kim Chang Son was asked by a reporter at the Beijing airport on Monday night if he was flying to Singapore for talks with the United States, he said he was ‘going there to play,’ according to footage from Nippon Television Network.

Hagin’s team is one of three groups conducting parallel discussions with North Korean representatives in the lead-up to the summit.

US Secretary of State Mike Pompeo tapped veteran American diplomat Sung Kim, the US ambassador to the Philippines, to handle the main pre-summit negotiations in the DMZ border village of Panmunjom.

Those discussions have reportedly focused on denuclearization timelines and security guarantees for the North.

Kim Yong-chol’s visit to the US would be the next step of those working-level talks. 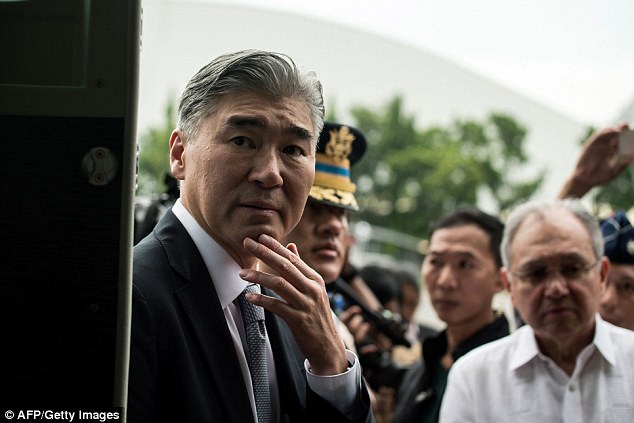 US Ambassador to the Philippines Sung Kim is seen in a file photo. He has been tapped to handle the main pre-summit negotiations in the DMZ border village of Panmunjom 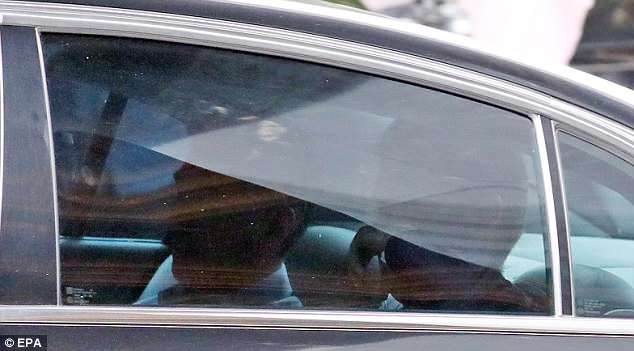 Sung Kim (left), US ambassador to the Philippines, and Randall Schriver, assistant secretary of defense for East Asia, leave from a hotel in downtown Seoul on Monday for Panmunjom 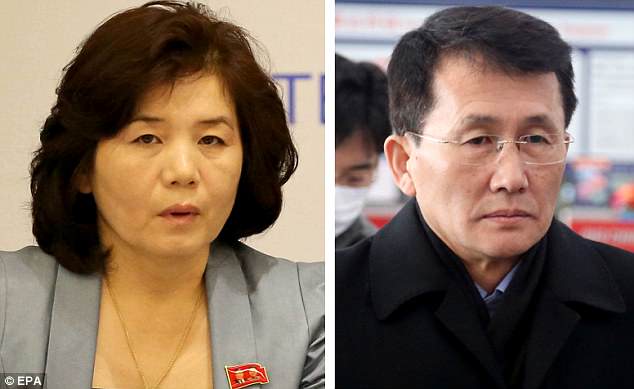 Choe Son-jui (left), North Korea’s vice foreign minister, and Choe Kang-il, a senior official with the North’s foreign ministry, are said to be working-level negotiators for talks with Sung Kim 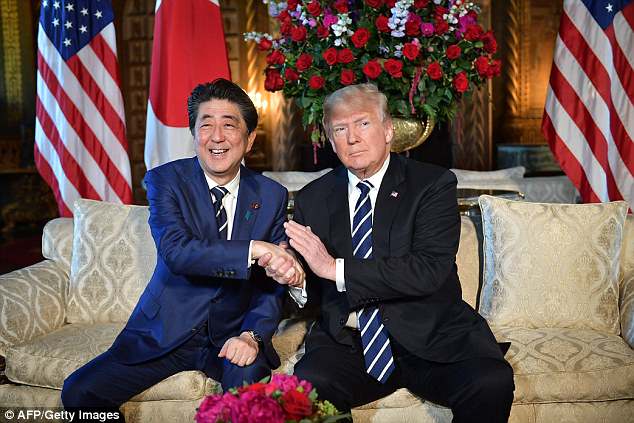 The third team on a separate but complementary track to the other discussions was a CIA team Pompeo set up last year when he headed the spy agency.

On Monday, Trump spoke with Japanese Prime Minister Shinzo Abe on the phone and the White House confirmed that the two will meet ahead of the summit.

‘The two leaders discussed recent developments in North Korea and confirmed they would meet again to continue close coordination in advance of the expected meeting between the United States and North Korea,’ the White House said in a statement out the call.

‘The President and Prime Minister affirmed the shared imperative of achieving the complete and permanent dismantlement of North Koreas nuclear, chemical, and biological weapons and ballistic missile programs,’ the statement said.

Trump and Abe are scheduled to attend the G7 meeting of major industrialized nations June 8 in Canada, giving them a possible venue to meet.

Timeline for denuclearization is expected to be a major sticking point in any negotiations between Trump and Kim.

The North will push for a gradual drawdown, while the US wants a quick and decisive nuclear de-armament.