White House Chief of Staff John Kelly has ordered changes to the way staff gain access to America’s most closely guarded secrets in the wake of the Rob Porter scandal.

Kelly, a former Marine Corps general, has proposed a series of tweaks intended to limit temporary security clearances after Porter worked for months without full clearance.

Porter, who had daily access to the Oval Office and handled top secret documents, resigned in disgrace this month after allegations he beat both his two ex-wives.

For months the FBI knew about the allegations and notified the White House but he was still granted access to state secrets and sensitive meetings. Porter’s alleged history could have made him a target of blackmail.

Among the changes that Kelly has recommended are efforts to prioritize the most urgent cases and improve information sharing between the FBI and the White House.

The move looked to potentially threaten the position of Trump’s senior adviser Jared Kushner, who has interim clearance.

His background investigation has been going on for more than a year and officials have discussed in private that his clearance faces obstacles, the Washington Post reports.

One of the potential problems is amendments Kushner made on a form detailing contact with foreign officials.

Initially when he was filling out his security clearance application, Kushner failed to disclose some of his contacts with Russian government officials prior to the election.

His lawyer said at the time that it was an ‘administrative error that came during a very pressed time’. 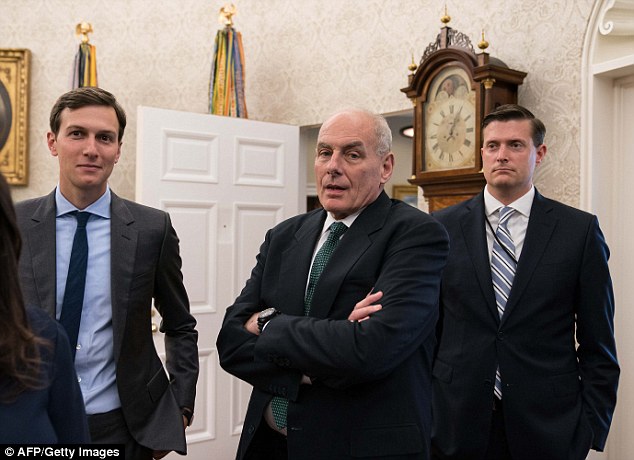 Chief of Staff John Kelly has ordered changes to the way staff gain access to America’s most closely guarded secrets in the wake of the Rob Porter scandal. Jared Kushner has been operating in the White House with interim clearance

In a statement regarding Kelly’s proposed changes, Kushner’s lawyer said ‘no concerns’ had been raised about his ongoing clearance application.

‘My inquiries to those involved again have confirmed that there are a dozen or more people at Mr Kushner’s level whose process is delayed, that it is not uncommon for this process to take this long in a new administration,’ Abbe Lowell said.

‘The new policy announced by General Kelly will not affect Mr Kushner’s ability to continue to do the very important work he has been assigned by the President.’

Kelly’s action comes after he and White House counsel Don McGahn came under withering criticism for their handling of the case involving Porter.

He issued a five-page memo on Friday that acknowledged White House mistakes but also put the onus on the FBI and the Justice Department to provide more timely updates on background investigations.

‘Now is the time to take a hard look at the way the White House processes clearance requests,’ Kelly wrote in the memo. ‘We should – and in the future, must – do better.’

Kelly’s plan would limit interim clearances to 180 days, with an option to extend them another 90 days if background checks had not turned up significant troubling information.

The White House gave shifting and often misleading accounts of when top officials learned of the domestic abuse allegations against Porter, and a congressional committee is investigating the matter.