The White House struggled to stay on message Tuesday as the president prepared to deliver his first State of the Union address.

Press Secretary Sarah Huckabee Sanders said the speech would be ‘about bringing the country together, setting a very optimistic vision’ as she ducked questions on ‘Today’ about the abrupt resignation of Deputy Attorney General Andrew McCabe.

Kellyanne Conway took a detour after telling the hosts of ‘Fox & Friends’ that it would be a ‘positive’ speech and harangued Democrats for their rejection of President Trump’s immigration compromise.

‘The question of whether this will be bipartisan, is not a question for the Republicans, it’s a question for the Democrats, who have yet to come to the table with anything except wearing black tonight, saying, “Me too,” and I guess boycotting Harvey Weinstein, and Bill Clinton, and, and others,’ the senior counselor to president said.

Kellyanne Conway took a detour from Trump’s ‘bipartisan’ message. Democrats ‘have yet to come to the table with anything except wearing black tonight, saying, “Me too,” ‘ she said

The White House said Friday during a briefing on Trump’s remarks that the president would emphasize ‘bipartisanship’ in his progress report, delivering remarks that are ‘optimistic’ and ‘unifying’ this evening.

Trump’s speech will touch on immigration, infrastructure and national security, the White House says, in addition to traditional topics like jobs and the economy and will center on ‘Building a safe, strong and proud America.’

‘It’s a big speech, an important speech, we covered immigration…We’re going to get something done, we hope,’ President Trump said Monday.  ‘It’s got to be bipartisan because the Republicans really don’t have the votes to get it done in any other way.’ 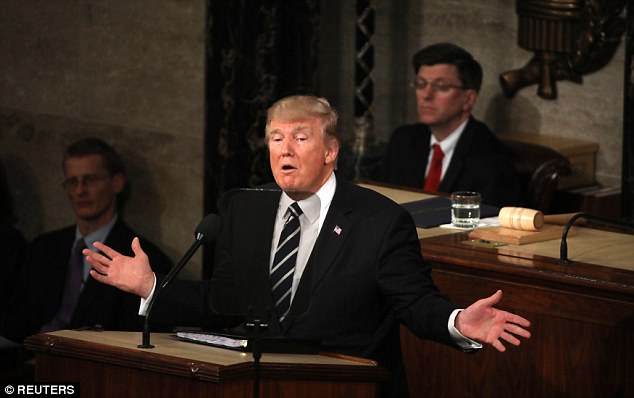 President Donald Trump will take a stride in the direction of ‘bipartisanship’ in his State of the Union address tomorrow, delivering remarks that are ‘optimistic’ and ‘unifying.’ He’s seen here in February of 2017 giving his first address to a joint session of Congress as president

Tuesday’s joint address to Congress will bring together lawmakers, Supreme Court justices and the president’s family.

All of Trump’s children, with the exception or Barron, his youngest, will be present for the speech, the White House said Monday, and so will the first lady.

The list of presidential guests sitting alongside Melania Trump in her box included a law enforcement officer, a service members and small business owners who have benefited from the president’s tax cut.

‘Some of these individual stories are heroic,’ White House Press Secretary Sarah Huckabee Sanders said. ‘All of them represent the unbreakable American spirit.’

Dozens of Democratic lawmakers will be bringing Dreamers with them as their guests to highlight their desire for immigration reform that gives illegal youth amnesty.

Trump has an Immigration and Customs Enforcement worker coming as his guest in a nod to his priorities.

The White House on Thursday revealed an immigration plan to provide 1.8 million Dreamers who came to the U.S. as children with a pathway to citizenship in a giveaway to Democrats. 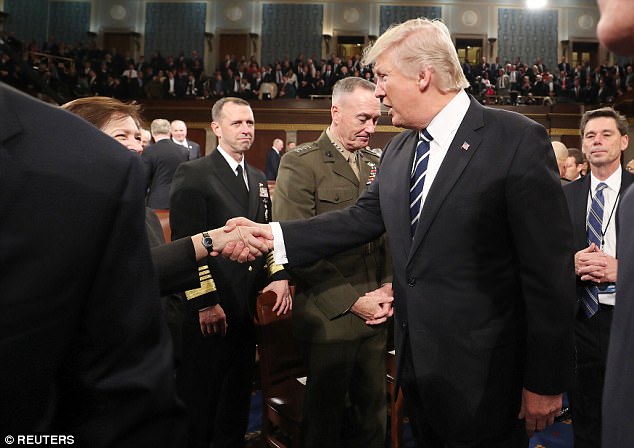 In exchange, Trump wants Congress to appropriate $25 million for his wall, and restrict visa access to approved applicants’ nuclear family. The president also wants Congress to do away with the visa lottery system in the plan that has rankled liberals and conservatives.

Immigration has become the focal point of Trump’s remarks on Tuesday, although he is also expected to spend time outlining a $1 trillion infrastructure proposal that relies heavily on private investment.

The federal government would put a mere $200 billion toward the plan, that could reach as high as $1.7 trillion.

He could also talk about his plans to continue the operation of the prison in Cuba at Guantanamo Bay.

A senior official could not say if Gitmo would come up in Trump’s speech after a report said the president would sign a executive order mandating the prison for enemy combatants stay open.

The official did say Trump was ‘going to talk about rebuilding our military, returning to the policy of peace through strength, returning to clarity about our friends and our adversaries, and his efforts to defeating terrorists around the world.’

Trump will also be boosting his tax plan in the speech and the record highs of the stock market.

‘There is already a great deal of optimism among Americans about the year ahead. And this year, I think people will see that they had great reason to be optimistic, in terms of the accomplishments and results of the last year,’ the official said Friday. 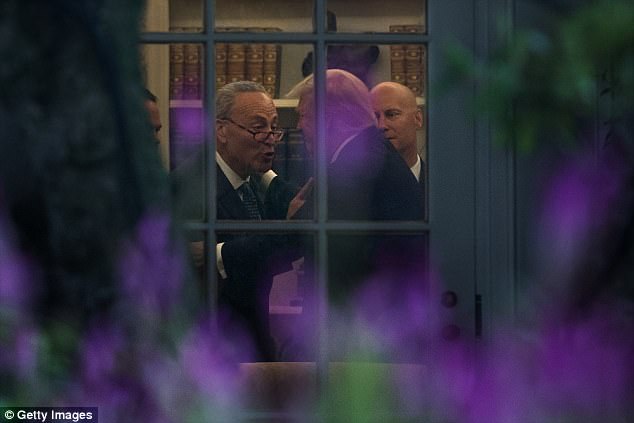 Trump is expected to open his arms to Democrats in the speech like Chuck Schumer who he’s seen here with in September at the White House. The pair more recently has been feuding

At the swearing in of his new Health and Human Services secretary on Monday, Trump said, ‘We worked on it hard, covered a lot of territory, including our great success with the markets and with the tax cut.

‘It’s going to be I think a very important speech on trade, the world has taken advantage of us on trade for many years, and as you probably noticed we’re stopping that, and we’re stopping it cold and we have to, we have to have reciprocal trade. It’s not a one-way deal anymore, Trump stated.

The president confirmed that the speech would also hit on DACA, the Obama-era program that protected illegal immigrant youth.

‘So we have a lot of things to discuss and we’ll be discussing them, and I hope you enjoy it. Thank you very much. See you tomorrow night,’ the president said.

At her briefing on Monday afternoon Sanders said she didn’t want to spoil the speech by giving too many details away.

‘It will obviously be must-watch TV,’ the Trump spokeswoman stated.

Massachusetts Rep. Joe Kennedy will be giving the official Democratic response to the president’s speech. Independent Sen. Bernie Sanders will also offer a response via video.