President Trump has made known his ‘support’ for a massive $1.3 trillion ‘omnibus’ spending bill taking shape in Congress that provides $641 million for President Trump’s border wall.

The wall funding has been considered a looming potential sticking point with the White House, since it stops far short of the $25 billion the administration was initially demanding.

The deal, which was still coming together Wednesday even as government offices closed for a winter storm, provides $1.6 billion for ‘physical barriers and technology’ at the border.

But most of that funding couldn’t go for construction of the border wall. Those funds are set at $641 million – a substantial sum for a project Trump originally said Mexico would pay for, but still far short of its opening gambit in negotiations.

White House press secretary Sarah Sanders said in a statement Wednesday that Trump spoke with House Speaker Paul Ryan and Senate Majority Leader Mitch McConnell about the deal, and they ‘discussed their support’ for the bill.

TOUGH SLEDDING: Both houses must pass the $1.3 trillion measure and President Trump must sign it to avoid yet another government shutdown

House Speaker Ryan’s office told DailyMail.com: ‘The speaker met with the president this afternoon to discuss the emerging funding bill. They had a good conversation about the wins delivered for the president, and he is supportive of the bill.’

Sanders continued in her statement: ‘The President had a discussion with Speaker Ryan and Leader McConnell, where they talked about their shared priorities secured in the omnibus spending bill.’

She added: ‘The President and the leaders discussed their support for the bill, which includes more funds to rebuild the military, such as the largest pay raise for our troops in a decade, more than 100 miles of new construction for the border wall and other key domestic priorities, like combatting the opioid crisis and rebuilding our nation’s infrastructure.’

Government funding is set to run out at midnight on Friday – leaving the possibility of yet another government shut down.

The final deal also stops short of some other Trump goals, such as de-funding sanctuary cities and increasing detention beds.

It includes a compromise on funding for a ‘Gateway tunnel’ between New York and New Jersey, one of the top infrastructure projects in the nation.

It is a priority for Senate Democratic leader Charles Schumer, and Trump has said he opposes it and even threatened a veto.

The project will get $540 million in grants and would be eligible for a share of $2.9 billion in Transportation Department grants, NJ.com reported. It isn’t mentioned specifically in the bill but would get the funds from existing accounts.

The measure also will include $10 billion in infrastructure spending for highways, airports and railroads, along with an increase of $2.8 billion to fund opioid addiction treatment, prevention and research, a congressional source said. 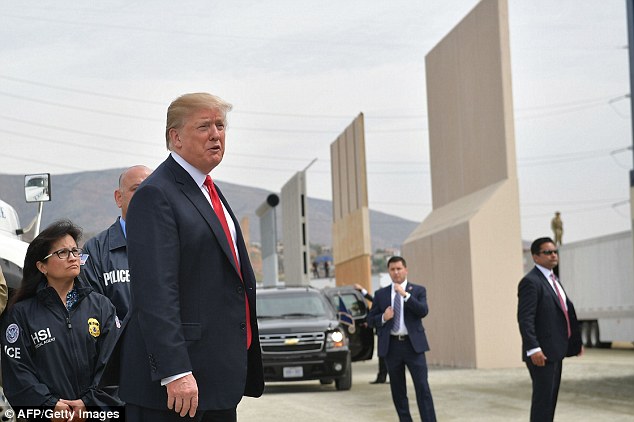 THIS COULD BE A BARRIER: The deal provides $1.6 billion for ‘physical barriers and technology’ but only $641 million for Trump’s border wall 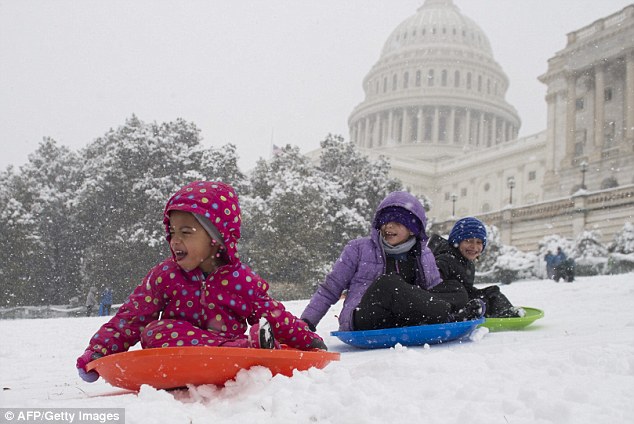 ALL DOWNHILL FROM HERE: Children sled at the US Capitol during a snow storm in Washington, DC, March 21, 2018. Congress stayed open, though federal government offices closed

The Huffington Post reported that Trump was having second thoughts about supporting it, based on concerns about the wall.

More money for border security and fighting Russian election hacking was expected to be included in a $1.3 trillion U.S. government spending bill taking shape in Congress on Wednesday, along with gun legislation and a fix to a ‘grain glitch’ in last year’s sweeping tax law overhaul.

A senior Republican source said legislation to improve existing background checks on gun buyers would be included in the spending bill, as would a measure to further help schools prevent gun violence.

These steps, following the Feb. 14 mass shooting at a Parkland, Florida, high school and Tuesday’s shooting at a school in Maryland, fell short of Democrats’ calls for far tougher background checks and banning assault-style weapons.

The spending bill was expected to fund the government through Sept. 30, which would take budget squabbling off the table in the Republican-dominated Congress for the next several months, allowing lawmakers to better focus on their November re-election efforts.

‘The President had a discussion with Speaker Ryan and Leader McConnell, where they talked about their shared priorities secured in the omnibus spending bill.

The President and the leaders discussed their support for the bill, which includes more funds to rebuild the military, such as the largest pay raise for our troops in a decade, more than 100 miles of new construction for the border wall and other key domestic priorities, like combatting the opioid crisis and rebuilding our nation’s infrastructure.’

Lawmakers have been arguing since early 2017 about funding for the current fiscal year, which began last Oct. 1. Since then, a series of temporary funding measures have been enacted, but only after two brief government shutdowns occurred because of Congress’ inability to pass appropriations bills in a timely way.

House of Representatives Speaker Paul Ryan’s communications office issued a statement saying the legislation had been finalized but full details were not yet made public.

‘We do have a few language points that need to clear up but we have made good progress,’ House Democratic Leader Nancy Pelosi said in a statement.

Without action by Congress, temporary funding for some agencies and programs would expire at midnight on Friday.

One last-minute hang-up resolved on Wednesday was fixing a mistake in the sweeping tax law overhaul approved by Republicans in December that gave lucrative tax breaks to grain producers selling to farming cooperatives and a lesser break for selling to agriculture companies. Grain purchasers such as Anheuser Busch, Cargill and the ethanol industry said that said it put them at a disadvantage.

The ‘grain glitch’ fix will be in the spending bill, along with a bipartisan proposal to expand a low-income housing tax credit requested by Democrats, according to multiple aides.

Negotiations were prolonged by a dispute over President Donald Trump’s proposed border wall. So far, the package provides $1.6 billion for some fencing along the U.S. border with Mexico and other technological border security efforts, the source said.

Trump wanted $25 billion for his wall but negotiations fell through to provide more money in exchange for protections for ‘Dreamers,’ young adults brought illegally into the United States as children.

Trump also failed to get the money he wanted for additional immigrant detention center beds and agents to carry out his goal of deporting more undocumented people, according to one source familiar with the negotiations.

Additionally, the plan provides $307 million more than Trump requested for the FBI to counter Russian cyber attacks and $380 million for U.S. states to improve voting technology before November’s congressional election, according to the source.

U.S. intelligence agencies have said Russia tried to interfere in the 2016 presidential election campaign and will try again this year. Russia has denied any meddling.

If approved by the full House and Senate, the bill would fund the biggest U.S. defense buildup in 15 years.

It also would allocate $10 billion for highways, airports, railroads and high-speed broadband, including money for the so-called Gateway rail tunnel connecting New York and New Jersey, the source said, despite a veto threat by Trump.