The White House on Wednesday distanced  President Biden from Democratic Rep. Ilhan Omar after she stood by her comments comparing the US and Israel to Hamas and the Taliban.

‘Any attempt to draw an equivalency between the United States and our close ally, Israel, with a terror groups like Hamas or the Taliban, is false and unacceptable,’ Press Secretary Jen Psaki said at her briefing on Wednesday.

Psaki did however defend Omar and insisted she did not mean her comments, but said:  ‘Those are certainly not comments that we’ve made from here.’

Omar has face furious criticism after she appeared on CNN with Jake Tapper and said she didn’t regret the comparison she made earlier this month.

GOP Rep. Andy Biggs had tweeted, ‘Ilhan Omar is a rabid anti-Semite who has no problem smearing Jews, even in her own party. Shameful and un-American.’

The White House on Wednesday distanced President Biden from Democratic Rep. Ilhan Omar after she stood by her comments comparing the US and Israel to Hamas and the Taliban. ‘Any attempt to draw an equivalency between the United States and our close ally, Israel, with a terror groups like Hamas or the Taliban, is false and unacceptable,’ Jen Psaki said 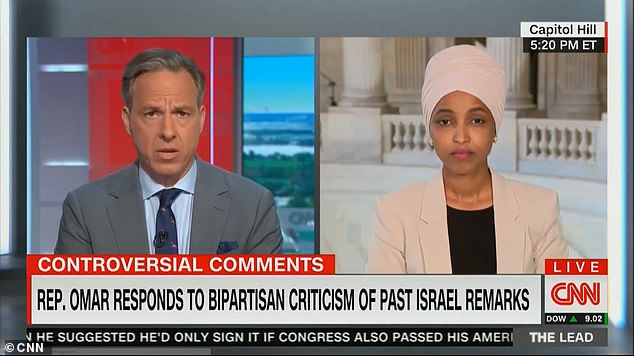 Rep. Ilhan Omar (right) said Tuesday that her Jewish colleagues ‘haven’t been equal partners and justice’ and said she didn’t regret equating the U.S. and Israel with Hamas and the Taliban during an interview with CNN’s Jake Tapper (left)

Republican Sen. Tom Cotton asked, ‘Why is Ilhan Omar still on the Foreign Affairs Committee?’ he asked, sharing the Tapper clip. ‘Why is she on any committee?’

Feminist Muslim writer Asra Nomani tweeted, ‘This is what a modern day Muslim Supremacist looks like. Nomani shared the video and added, ‘Her wound is bigger than their wound—a wound collector in the Oppression Olympics.’

Omar spoke to CNN’s Jake Tapper, who asked her if she understood why the language she’s used about Israel was perceived to be anti-Semitic by Jews.

‘I have welcomed any time my colleagues have asked to have a conversation, to learn from them, for them to learn from me,’ Omar responded. ‘I think it’s really important for these members to realize that they haven’t been partners in justice,’ she added.

‘They haven’t been equally engaging in seeking justice around the world,’ the Minnesota Democrat continued. ‘And I think I will continue to do that.’

Omar added that it was important to her ‘as someone who knows what it feels like to experience injustice in ways that many of my colleagues don’t’ to be a voice in finding accountability.

The ‘squad’ member’s latest dust-up with Jewish colleagues came earlier this month when she asked Secretary of State Antony Blinken where victims of alleged war crimes could pursue justice if the U.S. is against the International Criminal Court taking up the cases of Palestinians and Afghans.

‘We have seen unthinkable atrocities committed by the U.S., Hamas, Israel, Afghanistan, and the Taliban,’ Omar wrote in a tweet sharing a video of the exchange.

Linking the U.S. and Israel to the Taliban and Hamas created an uproar, including among Jewish Democratic lawmakers.

Previously, Omar had sparked fury when she talked about how the U.S.-Israel relationship was ‘all about the Benjamins.’ 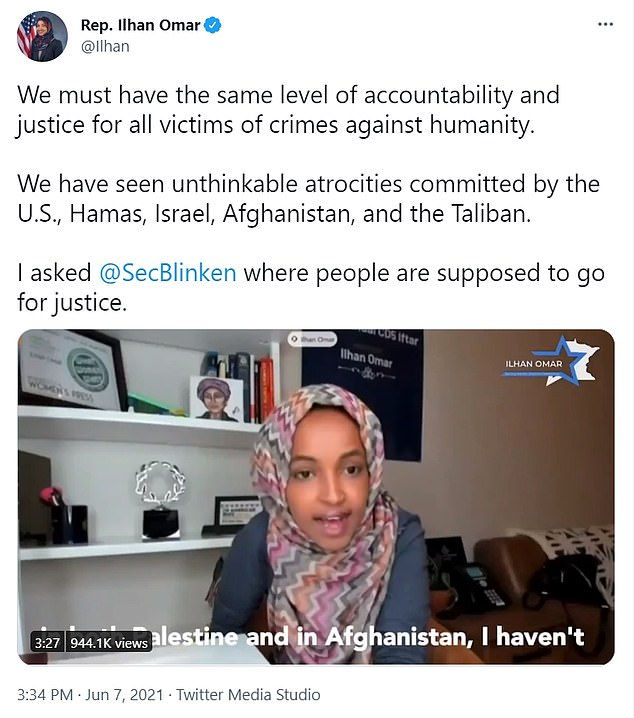 ‘We have seen unthinkable atrocities committed by the U.S., Hamas, Israel, Afghanistan, and the Taliban,’ Omar wrote in a tweet sharing a video of her questioning Secretary of State Antony Blinken. The comment sparked fury, including among Jewish Democrats 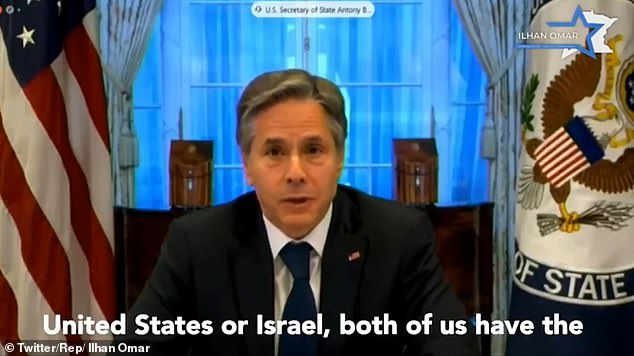 Omar responded ‘I don’t’ when Tapper asked if she regretted her most recent controversial comments.

‘I think it’s really important to think back to the point that I was trying to make,’ she said.

‘Obviously, I was addressing Secretary of State Blinken. The cases are put together in front of the ICC. ICC has been investigating. I know that some of my colleagues don’t lend legitimacy to the ICC, but I tend to think that people around the world who have experienced injustice need to be able to have a place where they can go,’ she argued.

‘And, as a country that helped found the ICC and supported it, I think that it is really important for us to continue to find ways in which people can find justice around the world,’ Omar added.

More broadly she said she understood why some of the things she said would be interpreted as being anti-Semitic.

‘No, I hear that,’ she told Tapper when the journalist pressed the point.

‘I have obviously clarified and apologized when I have felt that my words have offended. And it’s really important, right?’ she said.

Omar, who is Muslim, also argued that she hasn’t been afforded the same courtesy.

‘As I have explained to my colleagues, they have engaged in Islamophobic tropes. I have yet to receive an apology,’ she said.

She argued that it should be a two-way street of understanding. 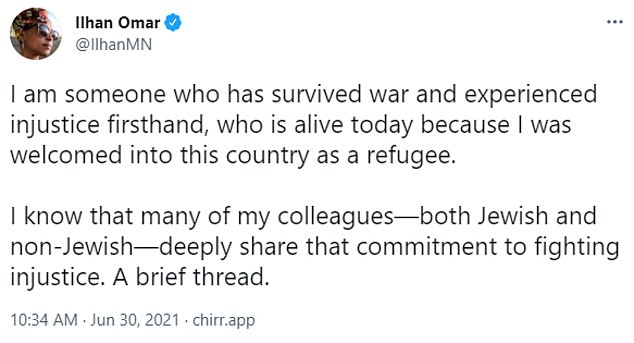 Omar walked back her Tuesday comments in a thread of tweets Wednesday first assuring critics that, ‘I know that many of my colleagues – both Jewish and non-Jewish – deeply share that commitment to fighting injustice’

‘I think, when we are engaging in a space where we don’t know how our language will be received, it is important for us to be open-minded. And I think I have always been someone who is humbled, someone who understands how words can be harmful and hurtful to people,’ Omar said. ‘And I have always listened and learned and behaved accordingly and showed up with compassion and care.’

In 14 tweets she sent out Wednesday, Omar walked back the comments she made on Tapper’s show.

‘I am someone who has survived war and experienced injustice firsthand, who is alive today because I was welcomed into this country as a refugee,’ she began. ‘I know that many of my colleagues – both Jewish and non-Jewish – deeply share that commitment to fighting injustice.’

She then said that both Jewish and non-Jewish colleagues share a commitment in fighting injustice.

‘I also know that the Black community and the Jewish community have historically stood side-by-side in the fight against injustice and throughout our history we have faced efforts to divide us based on our differences,’ she continued. ‘In this moment, we must stand in solidarity because what unites us is so much greater than what unites us.’

She talked about how the 1960s civil rights movement wasn’t ‘Black people working in isolation.’

‘It took a multiracial, multi-religious coalition of freedom fighters, including Jewish leaders like Rabbi Abraham Joshua Heschel, Kivie Kaplan, and Arnie Aronson, organizing in solidarity,’ she continued. ‘Heschel in particular was a deep inspiration to Martin Luther King and a moral leader of the movement.’ 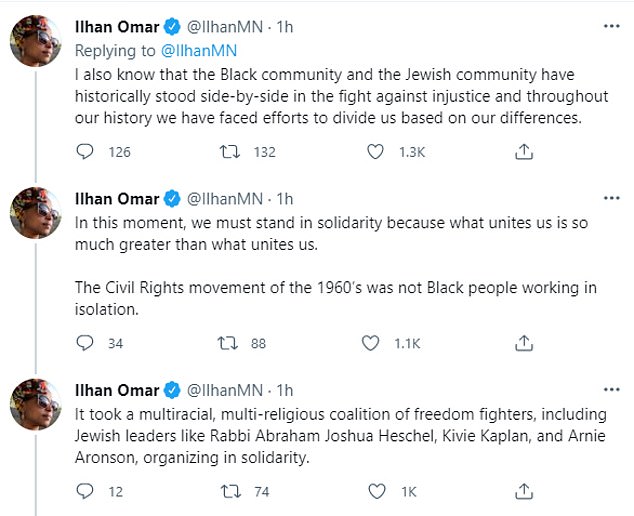 Rep. Ilhan Omar sent out 14 tweets on Wednesday in an effort to clean up comments she made on Tapper’s show the night before 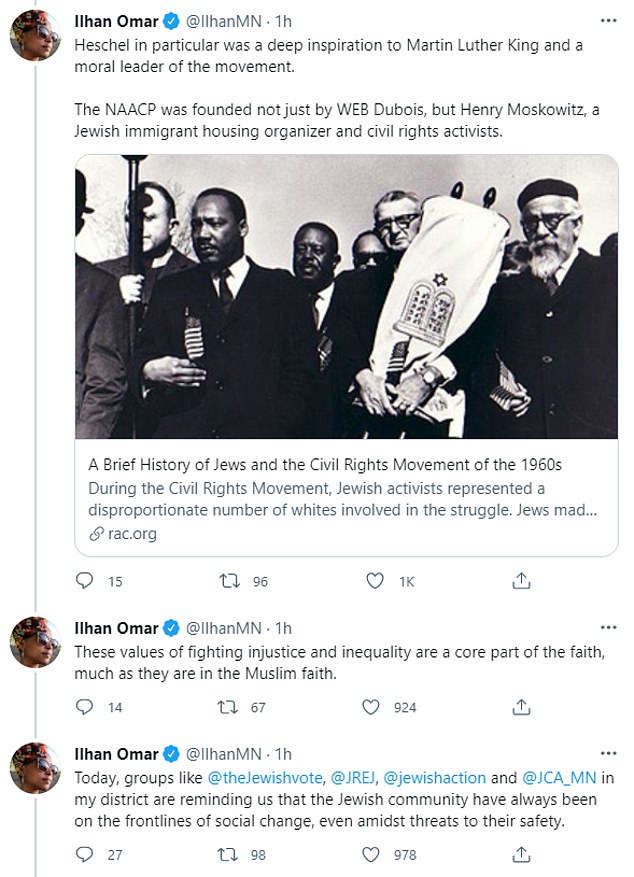 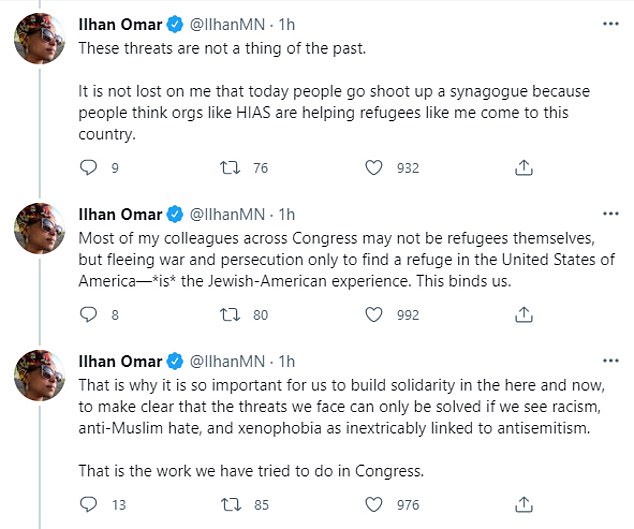 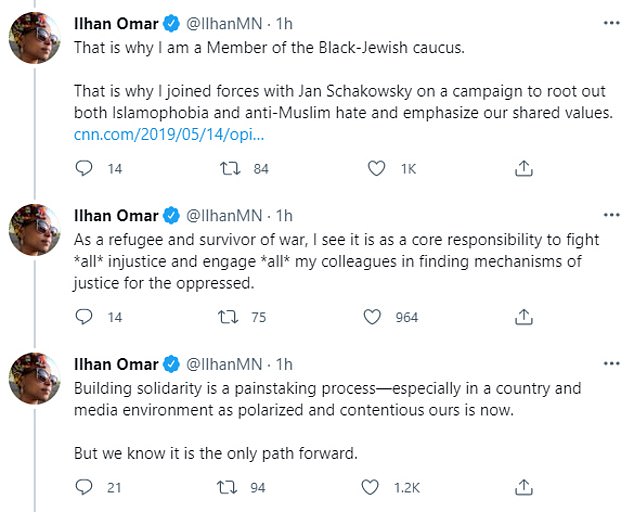 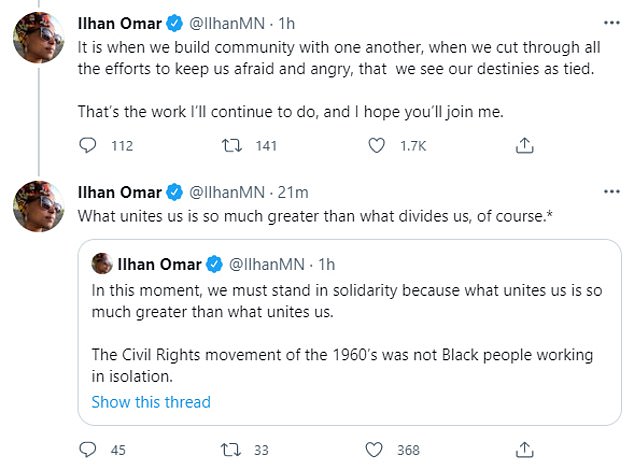 She said that the ‘values of fighting injustice and inequality’ are part of the Jewish faith – and the Muslim faith.

Omar also named a number of Jewish groups that are engaged in civil rights, ‘even amidst threats to their safety.’

‘These threats are not a thing of the past. It is not lost on me that today people go shoot up a synagogue because people think orgs like [Hebrew Immigrant Aid Society] are helping refugees like me come to this country,’ the Minnesota Democrat said.

‘Most of my colleagues across Congress may not be refugees themselves, but fleeing war and persecution only to find a refuge in the United States of America—*is* the Jewish-American experience. This binds us,’ she continued.

‘That is why it is so important for us to build solidarity in the here and now, to make clear that the threats we face can only be solved if we see racism, anti-Muslim hate, and xenophobia as inextricably linked to antisemitism,’ the lawmaker added. ‘That is the work we have tried to do in Congress.’

She pointed out that she is a member of the Black-Jewish caucus.

‘As a refugee and survivor of war, I see it is as a core responsibility to fight *all* injustice and engage *all* my colleagues in finding mechanisms of justice for the oppressed,’ Omar said.

‘Building solidarity is a painstaking process—especially in a country and media environment as polarized and contentious ours is now. But we know it is the only path forward,’ she continued.

‘It is when we build community with one another, when we cut through all the efforts to keep us afraid and angry, that we see our destinies as tied. That’s the work I’ll continue to do, and I hope you’ll join me,’ the congresswoman added.

So far, the backlash to the interview has been coming from Republicans.

‘There they go again… right wingers in Washington are once again claiming Rep.Omar said something she didn’t say, and trying to create a controversy where there is none,’ the Rhode Island lawmaker tweeted. ‘It’s pathetic that they are (once again) demonizing a young woman of color to score political points.’ 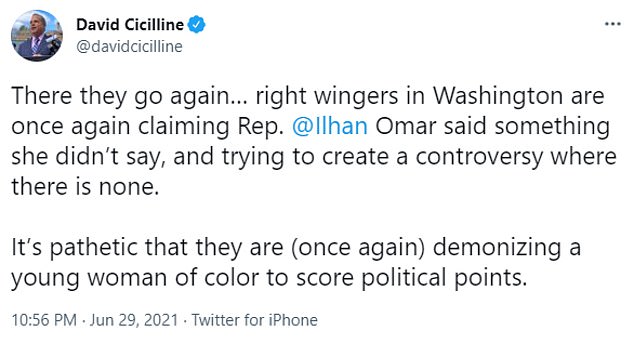 Democratic Rep. David Cicilline came to Omar’s defense in a tweet Tuesday night, saying Republicans were taking her statement out of context