A police officer in Indianapolis has been charged with battery after he allegedly lied about an incident where he punched a child in the face outside of his school after they were called to break up a ‘large fight’.

Officer Robert Lawson was charged with the Class A Misdemeanor on Monday for allegedly striking the student without a legitimate concern for self-defense, despite claiming in a statement that he threw an open hand palm strike in fear that the 17-year-old was about to hit the him.

Video evidence appears to show Officer Lawson ‘striking the juvenile with a closed fist’ and ‘continuing to use force including a knee strike to the juvenile’s abdomen or chest area’, Marion County Prosecutor Terry Curry announced in a statement.

Officer Lawson- who is white – also reported that another law enforcement officer stated she observed the youngster – who is black – swing his fist at the cop first outside Shortridge High School around 1.30pm on August 29.

But that officer denied making the statement.

The shocking video shows the Indiana police officer aggressively punch the teen during a verbal altercation where the boy’s aunt was present alongside the two Indianapolis Metropolitan Police Officers.

Lawson got into an intense argument with the guardian outside the building and the confrontation and physical altercation was captured on video by a third party at the scene. 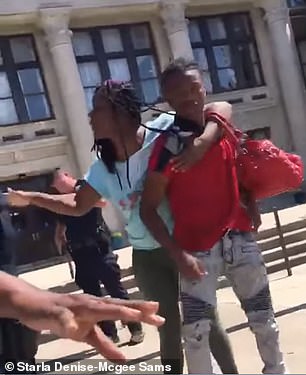 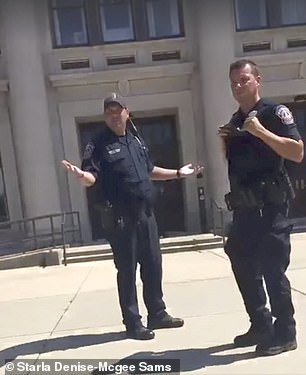 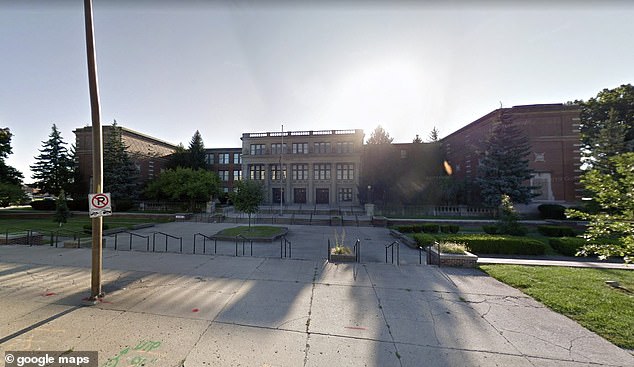 In the video shared on Facebook, the aunt and officers can be heard having an intense argument before one officer asks the aunt to leave the property.

As the two officers approach the aunt, the boy steps in between the two parties.

A voice off camera can be heard saying: ‘Y’all need to chill out.’

Then when Lawson strikes the child the adult woman jumps in to protect him and they tumble to the ground.

The clip was made public by non-official sources.

The IMPD placed Lawson on administrative leave the following morning after the clip circulated online. 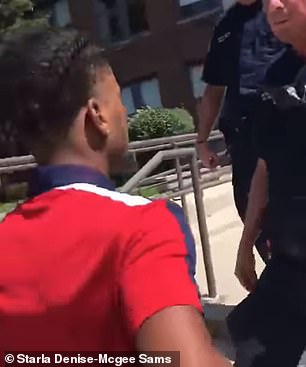 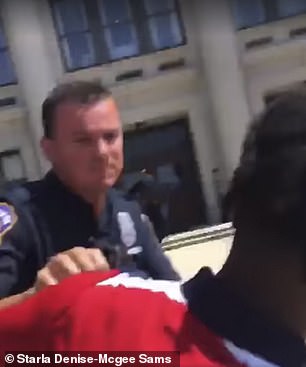 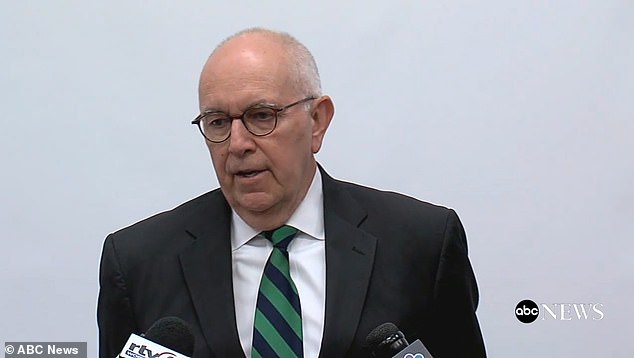 Video evidence appears to show Officer Lawson ‘striking the juvenile with a closed fist’ and ‘continuing to use force including a knee strike to the juvenile’s abdomen or chest area’, Marion County Prosecutor Terry Curry (pictured) announced in a statement

The report said the ‘student attempted to assault the officer.’

In a statement, Johnson said she feels a personal connection to the violent video and assured local families that Indianapolis Public Schools was investigating the matter.

Johnson wrote: ‘Our team is currently working to gather all information available and, at Shortridge, the school community and the district will come together in a number of ways in the coming weeks to support the school-wide culture, with students planning alongside administrators.’

Attorney Terrance Kinnard took on the family’s case and released a statement.

Kinnard plans to work on the families behalf and investigate the situation before officially releasing a legal response.

‘Like many, we are shocked by the behavior depicted in the video currently circulating on social media networks…. my staff and I will investigate all of the facts before deciding on a proper course of action,’ Kinnard said. 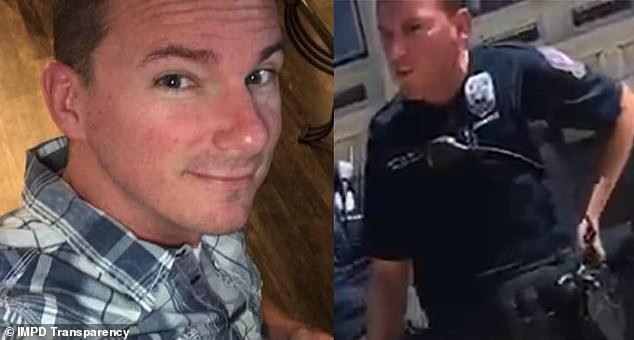 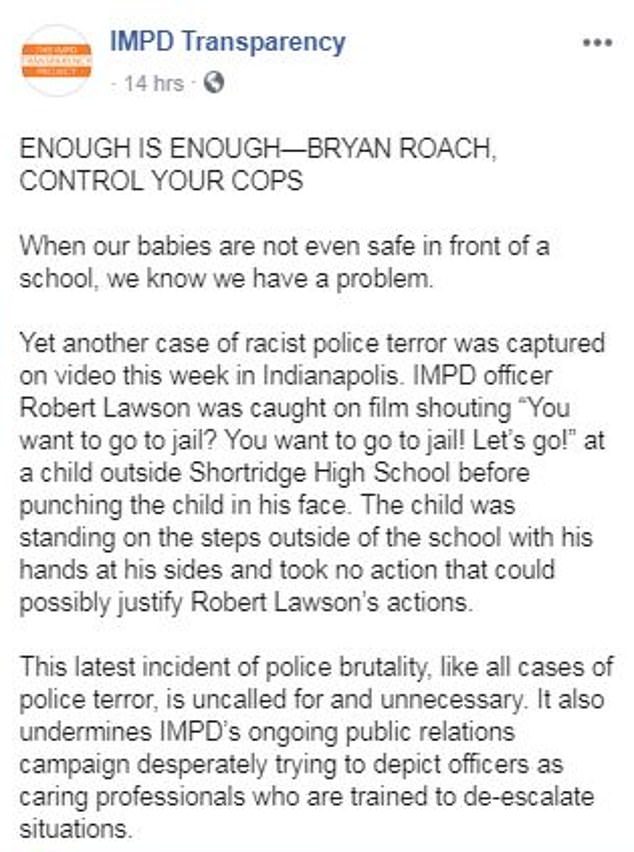 IMPD Transparency: ‘This latest incident of police brutality, like all cases of police terror, is uncalled for and unnecessary’

IMPD Transparency Project believes this most recent altercation is a part of a long line of negative police interaction in the community.

In a post, organizers said: ‘This latest incident of police brutality, like all cases of police terror, is uncalled for and unnecessary.’

The investigation is still ongoing.

Lawson’s lawyer, John Kautzman, told RTV6: ‘We look forward to a full and fair review of ALL the evidence in this case, including the officer’s observations, perceptions and training as it relates to the entirety of this encounter.’ 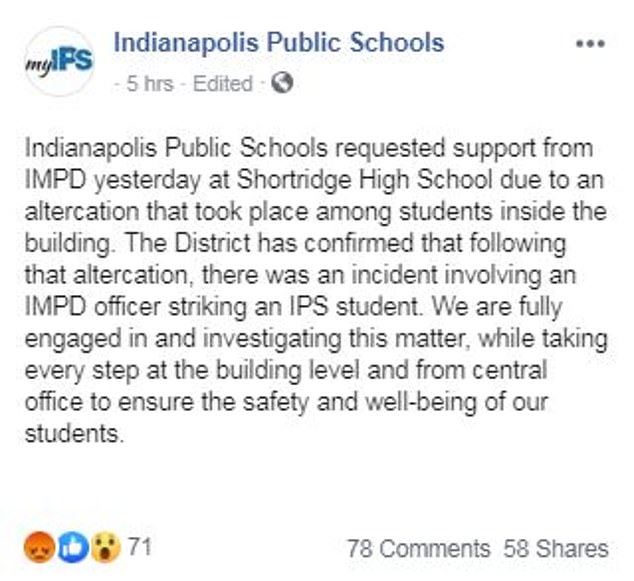 IPS: ‘We are fully engaged in and investigating this matter, while taking every step at the building level and from central office to ensure the safety and well-being of our students’ 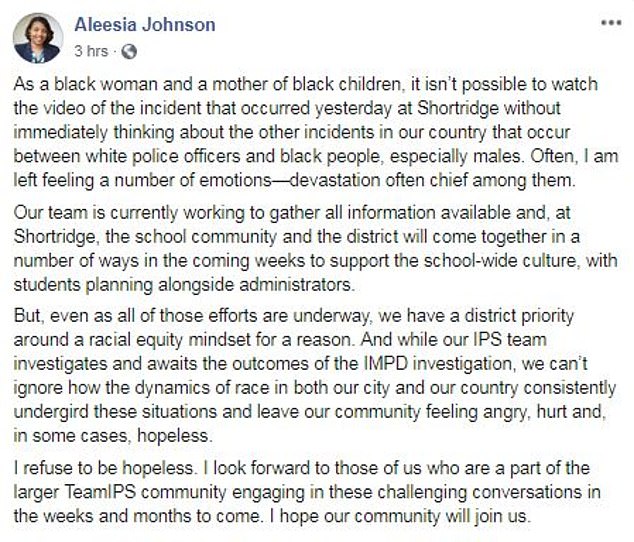