One of the white men filmed chasing unarmed black jogger Ahmaud Arbery then shooting him dead in a viral video is a retired police detective and district attorney’s investigator whose law enforcement links have caused two prosecutors to recuse themselves from the controversial case.

Gregory McMichael, 64, and his 34-year-old son Travis were filmed on February 23 chasing Arbery in their white pick-up truck through Brunswick, Georgia, because they thought he was a burglar.

Arbery, 25, was out for a jog when the pair stopped their truck in front of him in a tree-lined street. Travis got out of the car, wielding a rifle, and shot him after a brief struggle while his former cop father watched, with his own gun primed, from the cargo bed of their truck.

The killing was filmed by a vehicle driving behind the McMichaels and has now spread on social media.

Police were called to the scene but neither man was arrested and since then, it has been passed between three prosecutors, two of whom had to recuse themselves because of their professional ties to McMichael. 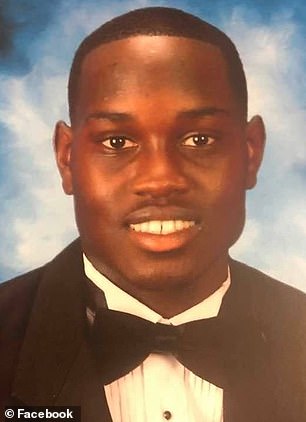 Father and son Gregory and Travis McMichael (left) were filmed shooting Ahmaud Arbery dead on February 23 after chasing him in their truck because they thought he was a burglar. Ahmaud was unarmed and was out running. Neither McMichael has been arrested or charged 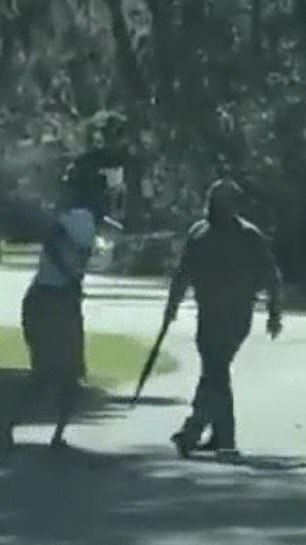 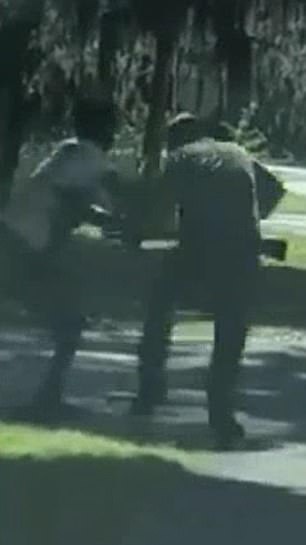 In the footage,  shot can be heard and the two can then be seen scuffling as Arbery looks to try to get the gun away from Travis. Two more shots can be heard and are fired at point-blank range before 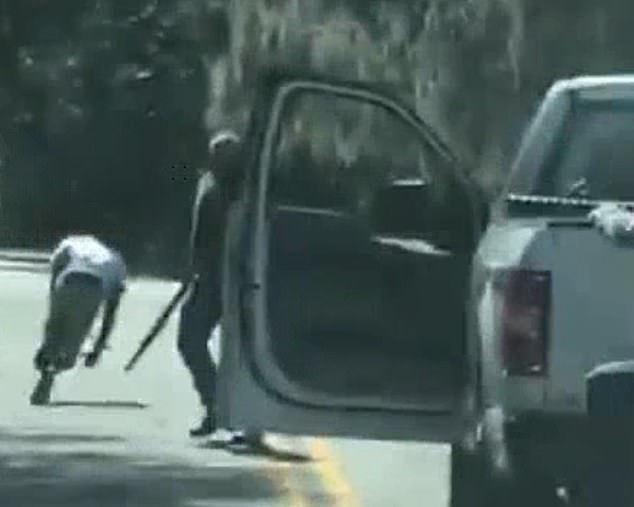 Arbery can be seen stumbling to the ground as the clip comes to a close. ‘This is murder,’ Arbery’s family lawyer, Lee Merritt said

Second prosecutor says he won’t press charges, then recuses himself

George Barnhill was given the case. He at first said he did not think it merited charges because the McMichaels were acting lawfully by trying to carry out a citizen’s arrest, which is legal in Georgia.

Third prosecutor passes it on to grand jury

That will not happen until at least June 14 because of how the courts have been impacted by the COVID-19 pandemic.

The first, Jackie Johnson, recused herself because Gregory worked in her office as an investigator until retiring a year ago. He previously served as a detective in the police department.

The second prosecutor, George Barnhill, said that he believed the McMichaels were within their rights to chase Arbery and arrest him, with guns, because citizens arrests are legal in Georgia.

He also claimed that Ahmaud ‘initiated’ the fight – even though the start of it is out of the video frame – and that he ‘clearly’ tried to grab Travis’s weapon frm him.

As such, he said Travis was lawful in shooting him because it constitutes a stand your ground killing.

Barnhill later recused himself amid complaints that his son works in the first prosecutor’s office, where Gregory used to serve.

The third prosecutor, Tom Durden, has passed the case off to a grand jury, meaning it could be months before anyone is charged or arrested since court proceedings have been stalled by the COVID-19 pandemic.

Barnhill’s own son works in the Brunswick District Attorney’s Office, where Greg McMichael used to work as an investigator.

Despite the conflict, he ruled that charges should not be brought against either Greg or Travis.

He also slammed the current prosecutor in charge of the case, Tom Durden, who has passed it on to a grand jury to weigh whether or not to bring charges.

‘Prosecutors will need a grand jury in order to formally indite them but that has nothing to do with going out and arresting the men seen on camera.

‘The prosecutors actually have the option to directly indite and skip the grand jury process,’ he added.

Now, Ahmaud’s mother is demanding that the men at least be arrested, let alone charged.

She appeared on Good Morning America on Thursday morning to say that she believess the white father and son are being protected by law enforcement.

‘I think no arrest has been made because of the title that he carried as a retired police officer.

‘They don’t feel like he was wrong because he was one of them,’ she said.

She revealed that she has not been able to bring herself to watch the video of her son’s killing that has spread through social media and sparked outrage.

‘I don’t think I’ll ever be in a mental state where I can actually watch the video,’ she said.

She added that her son, who would have turned 26 on Friday, had a ‘humbling spirit’. 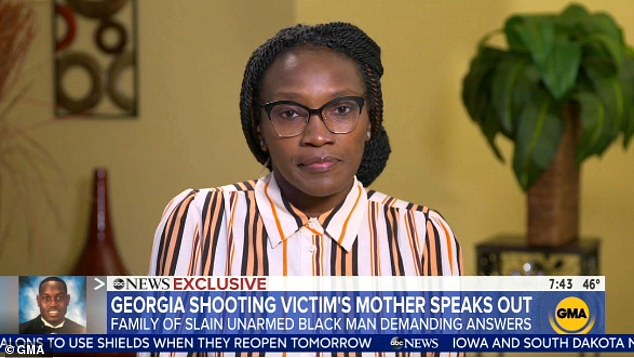 PROSECUTOR: UNARMED AHMAUD ‘INITIATED’ FIGHT AND REACHED FOR THE GUN

The second prosecutor to be given the case was George Barnhill.

In an April 2 letter to the Glynn County Police Department – where Greg McMichael worked – he said neither he nor his son deserved to be charged because they were firstly lawful in pursuing Arbery with their guns and then in shooting him.

He argued that they were trying to make a citizen’s arrest by chasing Arbery -which is legal in Georgia – and that they had ‘solid probable cause for it’, claiming Arbery was a burglary suspect.

He said the pair intended to subdue Arbery until police arrived but that Arbery ‘initiated’ a fight by grabbing for Travis McMichael’s gun.

He went on to say that Travis was lawful in shooting him because he thinks it constitutes a stand your ground killing.

The start of their fight happens out of the camera’s view but Barnhill said Arbery’s wounds – namely the first of three which was in his right palm – showed he had reached for the gun.

He went on to say that Travis McMichael feared for his life so did not break the law by using deadly force.

Lastly, Barnhill claimed Arbery had a ‘history of mental health and prior convictions’. 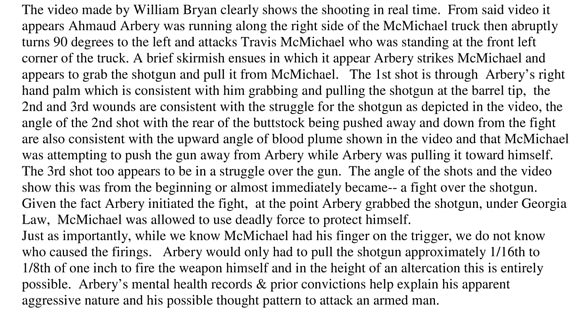 ‘He didn’t deserve to go the way that he went,’ she said.

PETITION FOR SHOOTERS TO BE CHARGED

A Change.org petition calling for ‘Justice for Ahmaud Arbery’ has gained nearly 15,000 signatures.

It demands that the McMichaels face charges over the killing.

The petition’s author said Arbery was the victim of racial profiling by the pair.

It also alleges that the DA is ‘personal friends’ with Gregory McMichael but it’s unclear which DA the petition refers to.

Lee Merritt, the family’s lawyer who previously described Ahmaud’s death as a ‘lynching’, said the second prosecutor involved ought to be hauled before the board of ethics for not disclosing the conflict of interest.

Speaking on Wednesday, Merritt stated during a press conference: ‘These men were not performing any police function or any duty as citizens of Georgia… these men were vigilantes, they were performing a lynching in the middle of the day.’

‘I saw my son come into the world,’ Jones said. ‘And seeing him leave the world, it’s not something that I’ll want to see ever.’

She added: ‘He was my baby boy that I had on Mother’s Day of 1994. He was his sister and brother’s keeper… his spirit was good. He was a yes ma’am and no ma’am type of fellow.’

‘My young son wasn’t doing nothing – minding his own business, running and working out. And that’s a crime? To work out and run and he ain’t breaking no law? No. Time out.’

The footage sparked widespread outrage from viewers across America, with a crowd of protesters assembling in Brunswick brandishing signs and chanting for justice.

On Wednesday, a crowd of protesters also gathered in Atlanta to raise awareness of Arbery’s death and to demand that arrests be made in the case.

FOX 5 reports that a larger demonstration is being planned for Friday – which would have marked Arbery’s 26th birthday. 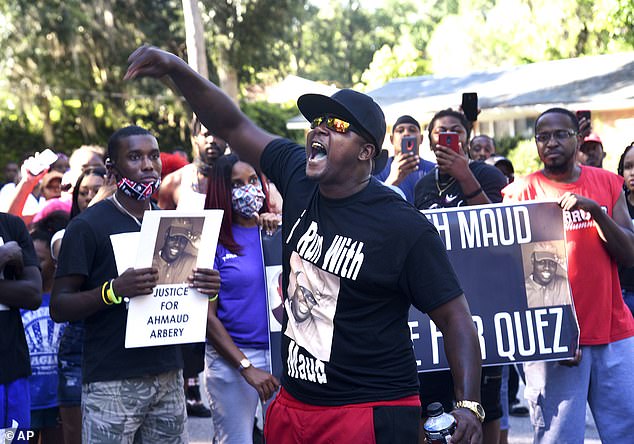 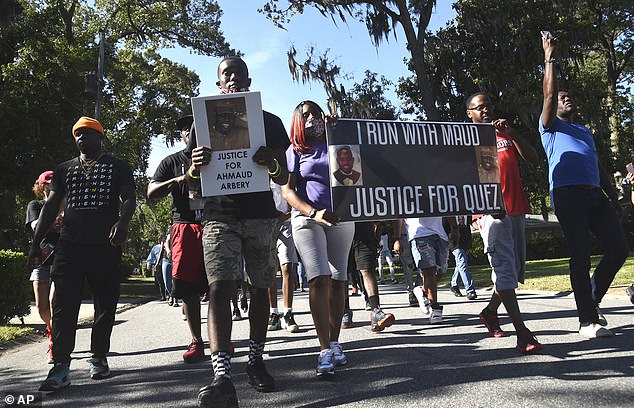 The shocking footage has sparked widespread outcry. Protesters are pictured in Brunswick on Tuesday. A larger demonstration is reportedly being planned for this coming Friday

Meanwhile, Arbery’s death has now captured the attention of the presumptive Democratic nominee for President, Joe Biden, who sent out a tweet describing Arbery’s death as ‘murder’.

‘The video is clear: Ahmaud Arbery was killed in cold blood,’ Biden tweeted late Tuesday along with a link to a Georgia district attorney recommendation that a grand jury hear the case.

‘My heart goes out to his family, who deserve justice and deserve it now,’ the presumed Democratic nominee continued in his Twitter post. ‘It is time for a swift, full, and transparent investigation into his murder.’ 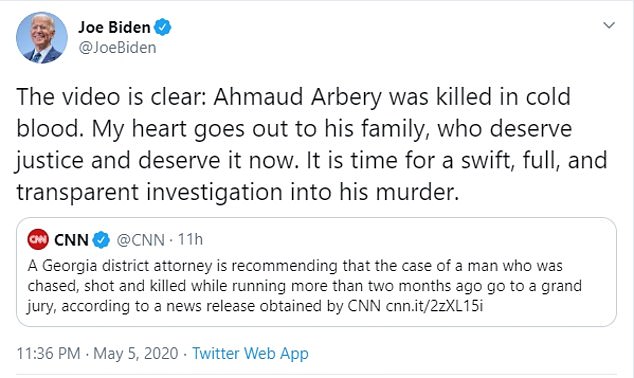 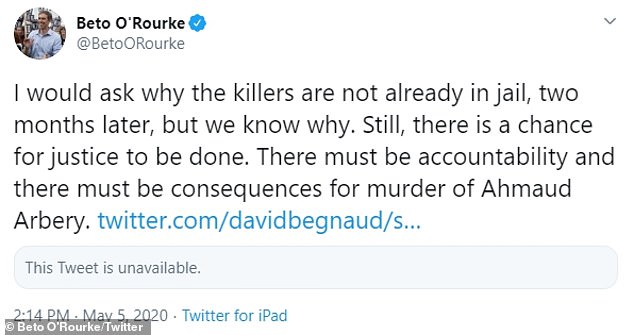 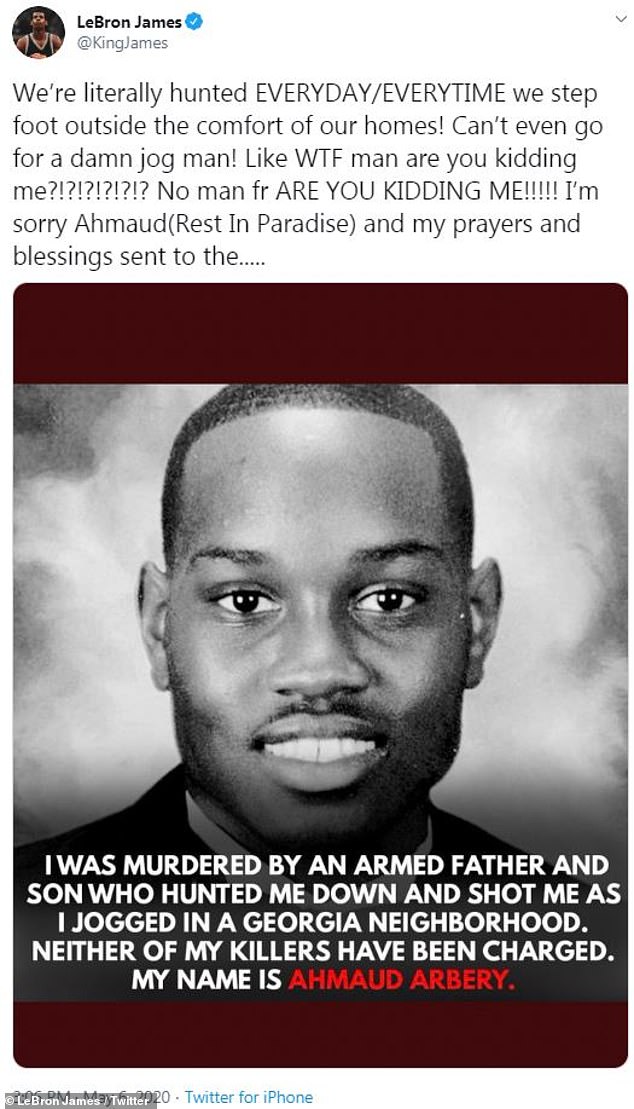 LA Laker star James tweeted out an impassioned message to his 45 million Twitter followers claiming black people are profiled on the color of their skin.

‘We’re literally hunted EVERYDAY/EVERYTIME we step foot outside the comfort of our homes!’ he wrote.

‘Can’t even go for a damn jog man! Like WTF man are you kidding me?!?!?!?!?!? No man fr ARE YOU KIDDING ME!!!!! I’m sorry Ahmaud (Rest In Paradise) and my prayers and blessings sent to the heavens above to your family’.

Meanwhile, Rosanna Arquette suggested the McMichaels be charged with murder for their ‘despicable racist heinous crime.’

Serana Williams also shared a series of post on her Instagram Stories, making it clear she believed the death was racially motivated.

‘My crime? BEING BLACK,’ she wrote, assuming the voice of Arbery. 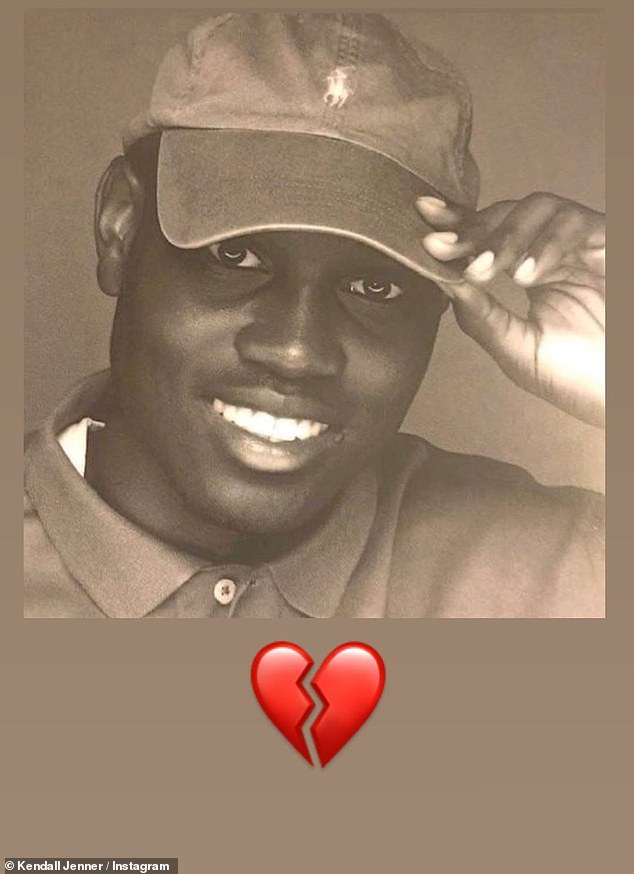 Upset: Kendall Jenner indicated she was heartbroken by the term of events 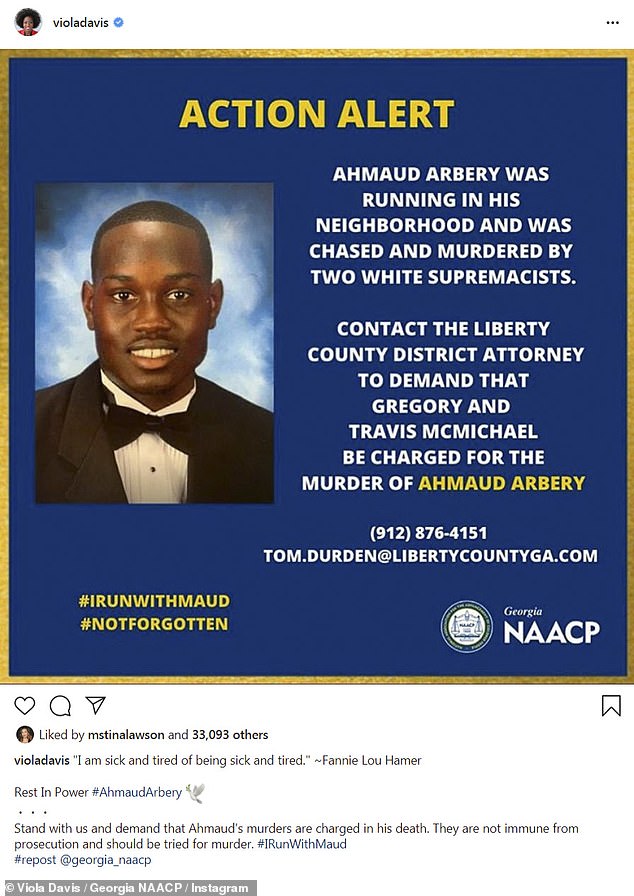 Tom Durden, a Georgia prosecutor assigned to examine the case, announced Tuesday that he plans to have a grand jury hear the evidence in the shooting.

The grand jury won’t happen for more than a month, as Georgia courts remain largely closed because of the coronavirus until at least June 13.

‘I am of the opinion that the case should be presented to the grand jury of Glynn County for consideration of criminal charges against those involved in the death of Mr. Arbery,’ Durden said in a statement Tuesday.

Reached by phone, Durden said no arrests have been made in connection with the shooting. He declined to say what charges he would have a grand jury consider or to comment further. 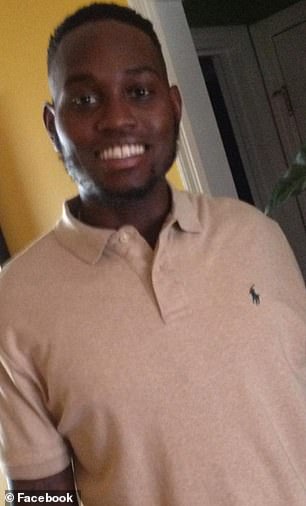 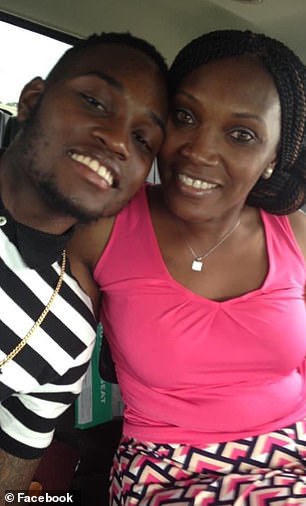