White man is fired after blocking a Latino man, 28, from entering his own apartment complex

A white man was fired from his tech job after blocking a young Mexican-American man from entering a San Francisco apartment complex where he lived and possibly assaulting another man who tried to intervene.

Michael Barajas, a 28-year-old a UC-Berkeley graduate, said he was pulling into his apartment complex’s garage at SOMA Residences on Tuesday after coming home from buying fruit.

According to Barajas, he used his remote key fob to open the garage door when a white SUV suddenly pulled in ahead of him and refused to move forward.

The couple, reportedly William ‘Hank’ Beasley and his girlfriend, allegedly referred to Barajas as a ‘criminal’ they couldn’t allow in.

‘Today I was not let into my complex by a white couple from Florida that said they would not let a criminal into their complex as they needed to protect it,’ Barajas wrote on Instagram.

‘They thought I was trying to tailgate them to break in and rob them/other cars in the garage. They were driving in full speed, stopped poked their head out and saw a brown boy in a hat and put their car on break.’

Barajas told ABC 7 that he was wearing a black outfit that showed off his tattoos at the time.

He believes that when Beasley poked his out of the passenger side door, he decided Barajas was threat based on his appearance.

Michael Barajas of San Francisco, California, recorded an incident where a white man named William Beasley refused to let him enter his own apartment complex

‘His immediate reaction was “hey you f**king criminal, you’re not coming in here,”‘ Barajas.

Cell phone footage taken by Barajas shows the white SUV blocking the entrance of the complex garage while Beasley threatens to call security.

Beasley is heard asking Barajas where his key fob is and, if he really lived in the complex, could simply re-enter after they’ve gone inside as proof of his residency.

Barajas repeatedly tells the couple he lives there and that he does had a key fob for the complex.

But the couple refuses to believe Barajas and continues to block the garage entrance.

The situation escalates when a witness intervened on his behalf.

‘Dude, pull into your space and go!’ said the witness, who Barajas identified as his neighbor. 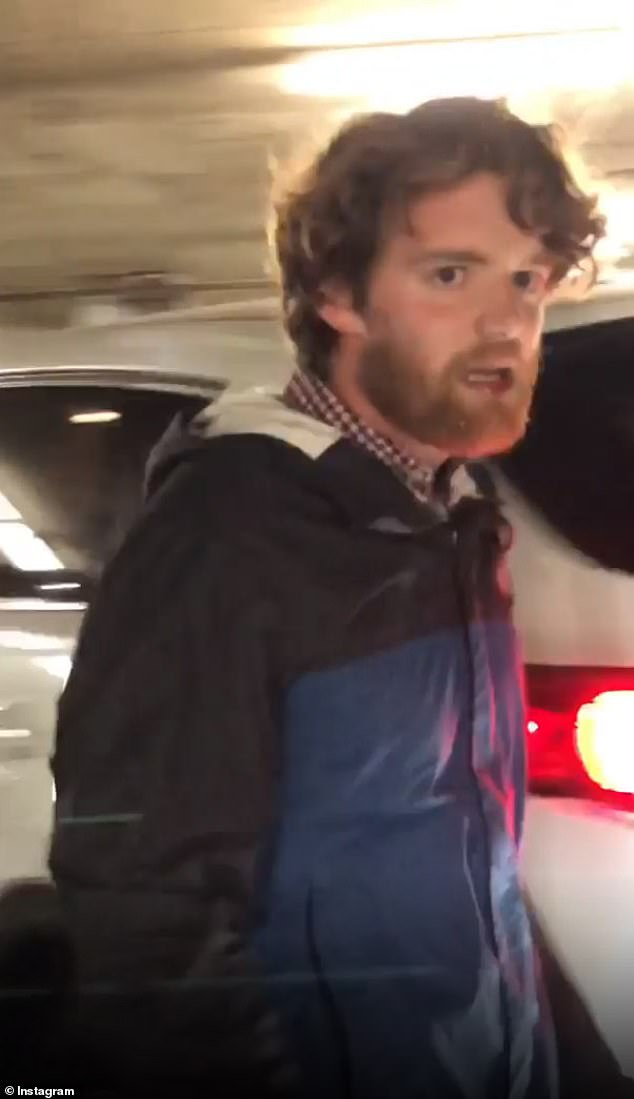 ‘What the f***’ is your problem?’ the neighbor asks the couple. ‘This happens all the time. I also have a key to this, so ease up. You are not this arbiter.’

Beasley then pokes his head out of the passenger side door again and threatens to call the police.

‘If you have a key card you can get in yourself, but I’m not letting you in. I called the cops. You got about five minutes to get out of here.’ says Beasley.

‘That’s fine,’ Barajas says. ‘Call the cops. What are you calling the cops about, Karen?’

The name ‘Karen’ has been used to describe entitled middle-aged white women in modern slang, but can apply to people who use their privilege to exert power in oftentimes unnecessary instances.

Barajas is heard calling the incident racist while his neighbor chimes in that the couple’s behavior is ‘pathetic.’

The couple then tries to intimidate Barajas by backing up the SUV towards Barajas car.

A loud slap is heard off camera after a witness reportedly smacked the white SUV, prompting Beasley to exit the vehicle and appears to attack the man.

‘You don’t touch my car bro! I’m protecting my f**king place!’ Beasley yells. ‘You don’t have a right to be here!’ 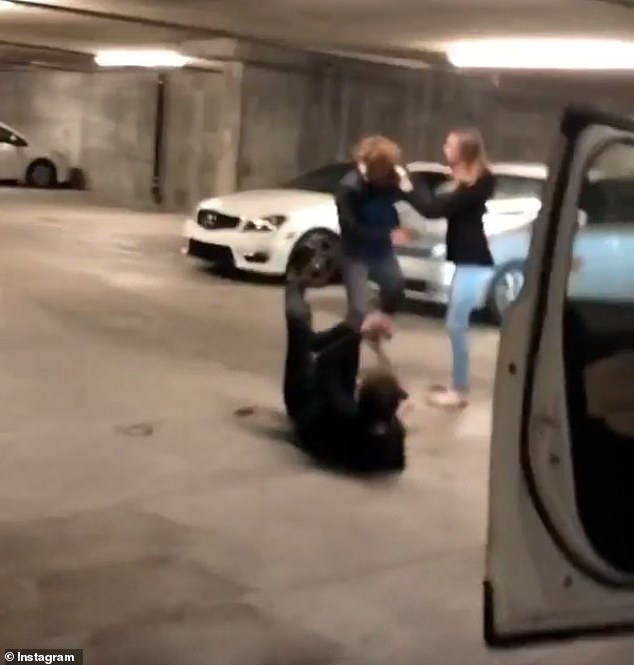 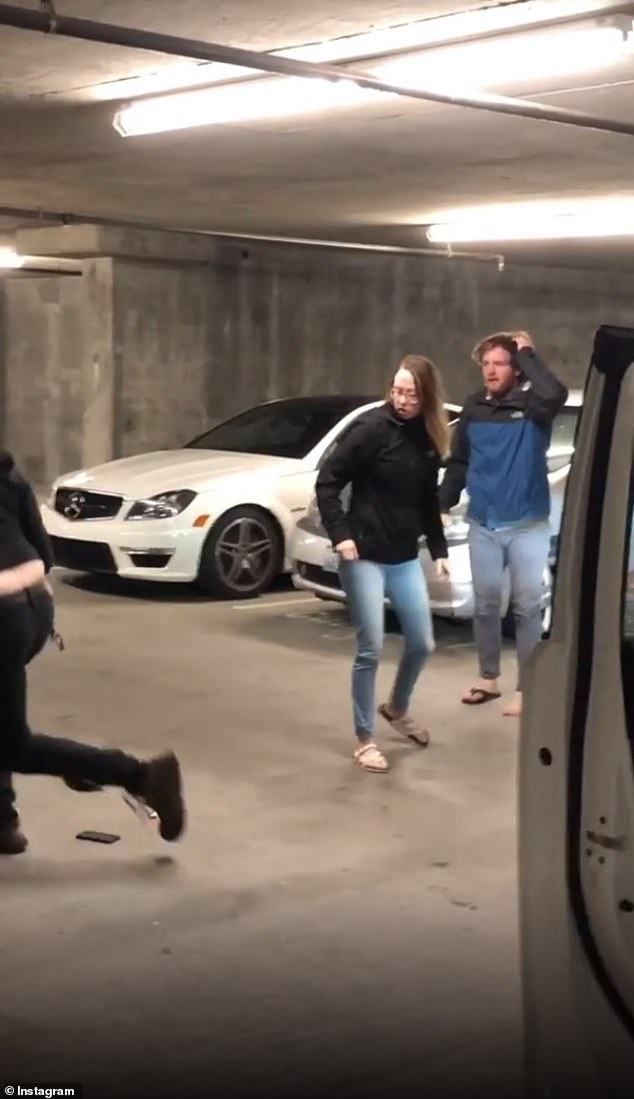 At one point, Barajas claimed that the man threatened him and his neighbor with gun violence.

‘He actually threatened to shoot us if we continued to engage in conversation!’ Barajas told ABC 7.

The girlfriend corrals Beasley back into the car, but not before Barajas admonishes them for their racist actions.

‘In the political climate that we’re in right now, and your going to act like this?’ Barajas says.

Authorities and apartment security arrived to the scene later. Barajas and the neighbor filed a report, despite ‘the girlfriend tried to pay us to not call the cops and not press battery charges.’

‘This is NOT OK and this goes to show you that racism is well and alive,’ said Barajas, adding that four other people walked into the garage during the incident.

Beasley reportedly said ‘nothing to them,; 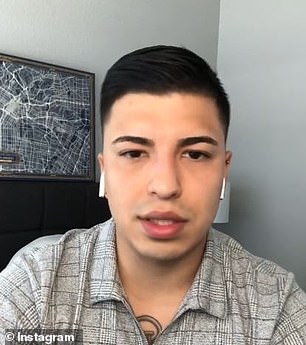 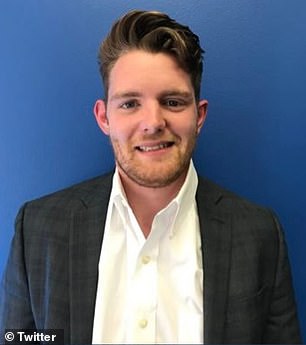 After Barajas (left) shared footage of the incident, Beasley has been accused of racial profiling and was fired from his job

Footage of the incident was shared to social media, where it amassed more than 145,000 views across social media platforms.

SOMA Residences said in a statement that they’re ‘actively working to resolve’ the incident and do not condone ‘violent acts, aggression toward any residents, discrimination and harassment.’

After the incident, the couple maintained that they were in the right when an ABC7 photographer asked for their side of the story.

‘I talked to them and asked them nicely,’ Beasley said, with his girlfriend adding that ‘he didn’t know’ Barajas lived in the complex.

When confronted over accusations of racial profiling that have swirled across social, Beasley reportedly got defensive.

‘Completely not true, why are you attacking me?’ he said.

In a statement, APEX Systems said they ‘will not tolerate violent or racist behavior of any kind’

APEX Systems, where Beasley was an employee, fired him after conducting an internal review of the incident and stated they will not ‘tolerate violent or racist behavior.’

Barajas said he’s satisfied with how SOMA Residences handled the incident, noting he’s grateful that others intervened and how far he’s come in life.

‘I’ve always been from a really poor, poor immigrant family, so I think what happened just struck very hard for me. I felt, for me, that I do not belong here.’

He added that he feels obligated to speak out for other minorities who might get caught in similar situations. 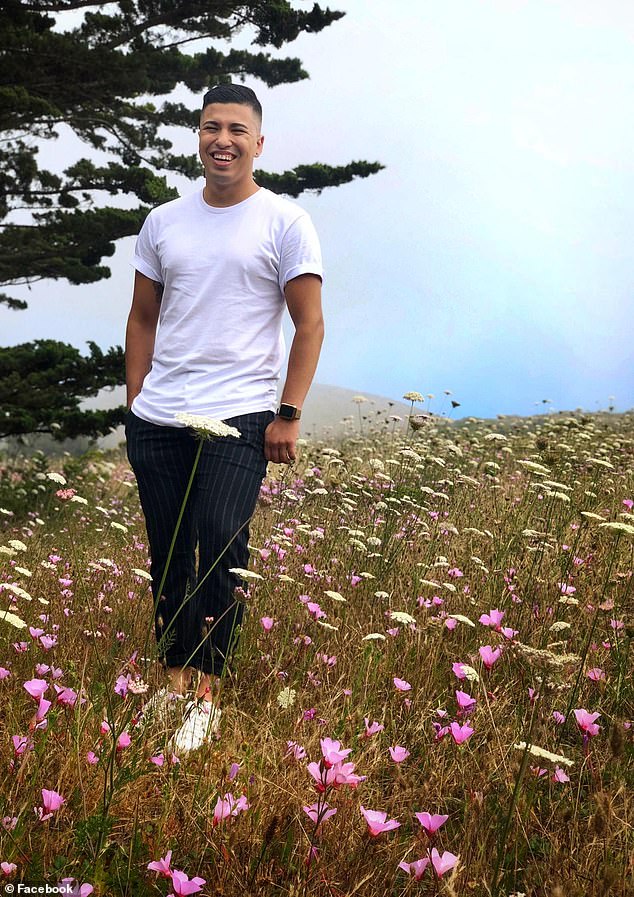 Barajas (pictured): ‘I’ve always been from a really poor, poor immigrant family, so I think what happened just struck very hard for me. I felt, for me, that I do not belong here’

‘Had that happened to someone who is undocumented and didn’t know how to handle the situation and had been violent in return? What would’ve happened?’ said Barajas.

This latest encounter comes after a barrage of similar instances of racial profiling that have continued over the backdrop of anti-racism protests.

Earlier this month, a Bay Area woman named Lisa Alexander was forced to apologize after calling the police on a Filipino-American man who wrote ‘Black Lives Matter’ outside his home.

She was fired after footage of the incident went viral.