A white Massachusetts man who tailed a young black woman because he felt ‘unsafe’ while she was going to pick up dog food from a neighbor faces charges, according to police.

Paul Birkhauser, 65, of Groveland will be charged with disorderly conduct and disturbing the peace, the Groveland Police Department told The Daily News of Newburyport on Thursday.

Birkhauser, who records indicate once worked as director of architecture and engineering for Fresenius Medical Care, a kidney dialysis services company, was summonsed to appear in Haverhill District Court.

Twitter users who flagged the video were told by the company: ‘Thank you for bringing this to our attention. We do not tolerate racism or discrimination and strictly prohibit it.

Black woman Julia Santos, 21, of Groveland, Massachusetts filmed the moment she confronted a white man (above) who allegedly followed her in his car for two miles on Monday before asking what she was doing in his neighborhood. He told her ‘I don’t feel safe with you driving around my neighborhood.’ The man has been identified as Paul Birkhauser, 65

She had been picking up free dog food from a local who posted about it on Facebook when she was tailed by the man. She shared the video on Twitter where it has gone viral 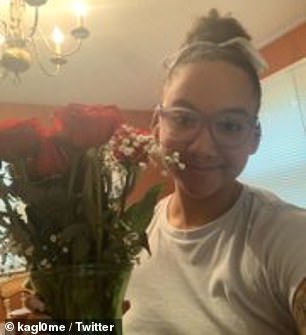 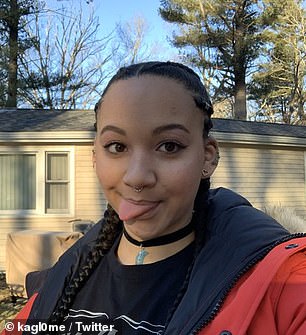 Santos said she’s lived in Groveland all her life and was shocked that the man insisted on knowing why she was in that specific neighborhood. Santos pictured on social media

‘Please note, this individual has not been employed with Fresenius Medical Care North America since 2019.’

Birkhauser, a resident of the Juniper Terrace neighborhood of Groveland who was identified by The Boston Globe, is the white man who was filmed as he allegedly followed Julia Santos in his car and demanded to know what she was doing in his neighborhood.

Santos, 21, was on her way home on Monday after she picked up free dog food from a local who posted about it in a neighborhood Facebook group in Groveland.

She said as she drove home she passed through Juniper Terrace and realized a man was following her for several streets in his car.

Disturbed by being tailed for two miles, Santos turned onto a side street to escape the man, where he pulled up next to her and confronted her.

‘So what are you driving up Juniper Terrace for?’ the white man is seen saying in the video, wearing a white T-shirt and sunglasses.

‘Actually. If you’re concerned if you want to look on the Town Crier (a Facebook Group) someone offered a bag of dog food, which I have in the back of my vehicle,’ Santos replied, her voice shaking.

‘Where? Juniper Terrace is a very small street, you didn’t stop,’ the man replies, trying to seem friendly.

‘I did. I stopped, I grabbed the dog food that is right there and then I left and saw you follow me all the way here and I turned right here because quite frankly, I don’t feel safe right now,’ Santos replied.

Santos challenged the man, asking if he followed her because she’s black.

‘I don’t know what color you are… what color are you?’ the white man replied.

‘I’m black and that’s why you’re following me?’ Santos said. 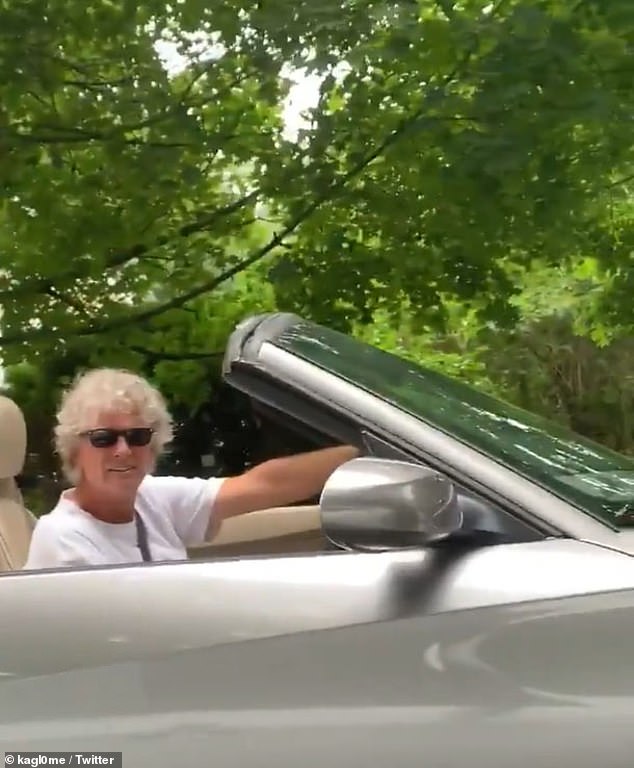 Another woman’s voice is then heard in the background saying, ‘What are you doing? I don’t like the fact that this poor girl is being harassed’ and the man backs up in his BMW convertible.

‘I just got Karen’d? This man followed me home because I went to pick up DOG FOOD at somebody’s house! He followed me all the way to my house so I turned on a side street and he said he felt “unsafe,”‘ Santos posted on Twitter, where the clip racked up over 193,000 views and nearly 3,000 retweets.

Santos said she’s lived in Groveland all her life and was shocked that the man insisted on knowing why she was in that specific neighborhood.

This Twitter user said on the disturbing video: ‘Reminder that “Karens” come in all shapes and sizes

‘Think i’ll just go cry and try to emotionally process today lol,’ she tweeted after posting the video of the incident.

Police have opened a criminal investigation into the incident and Groveland Police Chief Jeffrey Gillen said the clip ‘deeply disturbed’ him.

‘This is a good example to show this stuff is really happening,’ Adriana Santos, Julia’s sister said to The Boston Globe.

‘It was definitely shocking to watch, especially knowing my sister so well. I could definitely hear in her voice how shook up she was,’ Adriana added.

Twitter users voiced their fury over the video where Santos was seemingly targeted on account of her skin color, with some dubbing the man in the video a ‘Chad’.

‘Reminder that “Karens” come in all shapes and sizes,’ one Twitter user wrote.

‘This Chad is following and harassing a black girl who was afraid to drive home. She stopped and filmed. The video ends when someone comes to her aide. This Chad looks more like a Karen, dontcha think?  if you toss me his address, I’ll get his name so his boss knows,’ another Twitter user added.

‘This is literally one of my nightmares as a woman but add being black that’s 100 times more scary…’ another social media user said.