White nationalist Cantwell to turn himself in after rally

A white nationalist seen sobbing in a YouTube video about a warrant out for his arrest after the Charlottesville rally says he’ll turn himself in.

Christopher Cantwell of Keene, New Hampshire, is wanted on three felony charges: two counts of the illegal use of tear gas or other gases and one count of malicious bodily injury with a ‘caustic substance,’ explosive or fire.

Cantwell had posted a tearful video on YouTube after first learning of the charges, saying he was ‘terrified’ of being arrested. 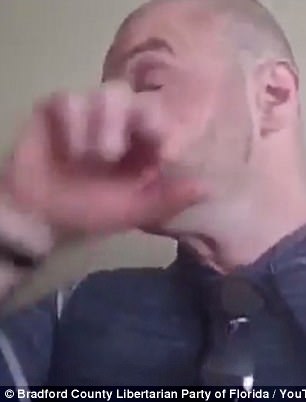 Christopher Cantwell, one of the white supremacists featured in a Vice News documentary about the Charlottesville neo-Nazi rally that went viral, was seen in a video posted to YouTube sobbing over the possibility that he might be arrested 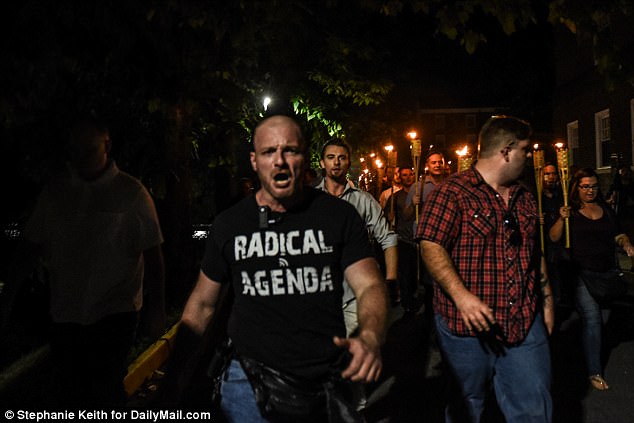 Cantwell (center, at the torchlit march before the rally) is wanted on three felony charges: two counts of the illegal use of tear gas or other gases and one count of malicious bodily injury with a ‘caustic substance,’ explosive or fire

The white supremacist, who was featured in a documentary on the rally,  said on Tuesday he plans to turn himself in, in the ‘most appropriate and safe manner possible.’

He said it would occur in the next 24 hours, ‘likely much sooner than that,’ and that he looked forward to his day in court.

Cantwell acknowledged he had pepper-sprayed a counter demonstrator during an August 11 protest but insisted he was defending himself, saying he did it ‘because my only other option was knocking out his teeth.’

The white nationalist was featured in a Vice documentary about the violent rally.

Though Cantwell told Vice that he was ‘not non-violent,’ he later told Digg: ‘I don’t want violence, I want a more peaceful society.’ 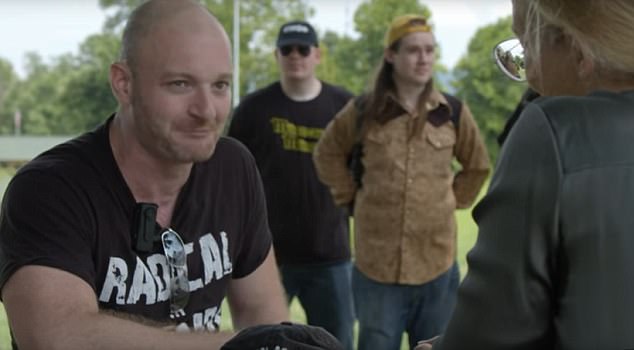 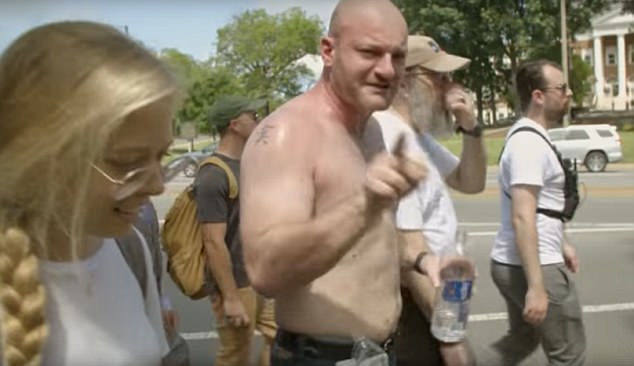 He then added that he was ‘willing to use violence to stop’ those who disrupt the peace – a reference to minorities.

Cantwell also repeated his belief that the suspect who drove a car into a crowd of anti-fascist protesters and killed one woman was acting in self-defense.

He also praised President Donald Trump for his remarks to the media, putting blame on ‘many sides’, saying ‘he did a pretty good job.’

While he was unhappy with Trump because he ‘doesn’t agree with us on the racial stuff,’ Cantwell said that the president will ‘prevent us from falling to communism.’

‘We have interests that overlap because we want to save the country,’ Cantwell said. 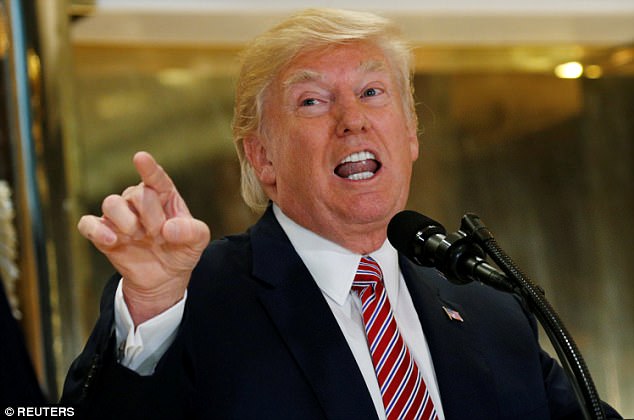 Cantwell says he is hopeful that someone ‘a lot more racist’ and ‘capable’ than Donald Trump (pictured giving a speech on Tuesday, where he blamed both sides for the violence at the rally) will come along to spread their racist ideals

In the Vice News documentary, Cantwell said he was disgusted that the president ‘let a Jew steal his daughter’.

He said he was hoping for a leader ‘a lot more racist’ and ‘capable’ of violence than President Trump to help the movement spread their racist ideals.

‘Somebody like Donald Trump, who does not give his daughter to a Jew,’ he said, in a documentary on last weekend’s deadly march in Virginia.

‘I don’t think you could feel the way I do about race, and watch that Kushner bastard walk around with that beautiful girl.’

The Unite the Right speaker was discussing his belief that white people were less inclined to ‘get in trouble’ than people of color. When reminded about multiple atrocities carried out by white suspects, including the Oklahoma City bombing, he conceded that everyone is capable of violence.

‘Of course we’re capable,’ added Cantwell who was heavily armed with multiple handguns, assault rifles and a knife at the rally. ‘I’m carrying a pistol, I go to the gym all the time. 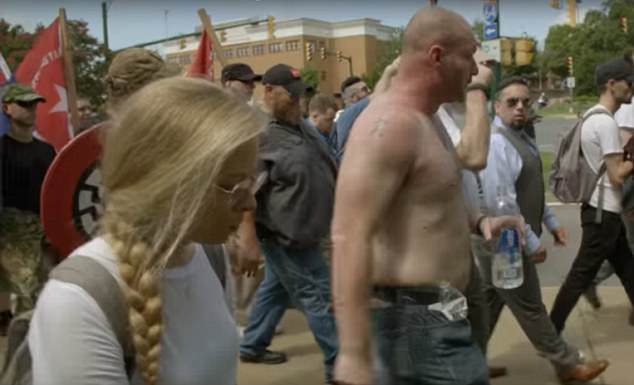 The Unite the Right speaker claimed that, unlike people of color, white people were less inclined to ‘get in trouble’ 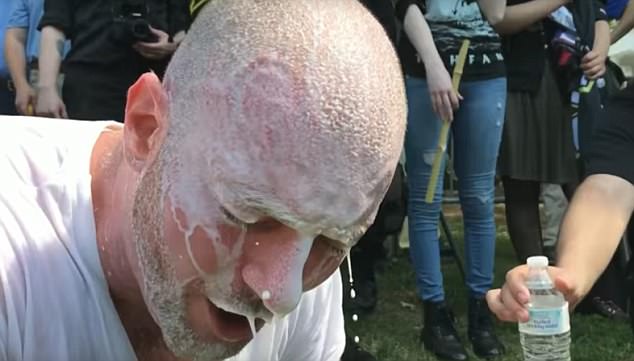 The documentary then moved on to filming Cantwell at the rally itself, as he poured milk over his face, moments after he was maced ‘by communists’

‘I’m trying to make myself more capable of violence. I’m here to spread ideas, talk, in the hopes that somebody more capable will come along and do that.’

It was not clear whether Cantwell was referring to his hopes for a more capable leader, or a leader more capable of violence.

The Vice documentary then moved on to filming Cantwell, of Roanoke Rapids, North Carolina, at the rally itself moments after he was maced ‘by communists.’

‘We’re here obeying the law, were doing everything were supposed to do trying to express opinions and the criminals are over there getting their way,’ the Unite the Right spokesman said, pouring milk over his face.

‘That’s a foundational problem in our society and whatever you think of my opinion, that is something that is going to put you in danger,’ added a clearly furious Cantwell, who claimed it was the second time he’d been maced in two days.

An associate of the co-organizer blamed it on the city being run by ‘Jewish communists’ and ‘n****rs.’

When asked by the Vice reporter, if that meant the white nationalist movement was presenting itself as the only non-violent activist group, Cantwell openly admitted they would use violence or would even kill the opposition if necessary. 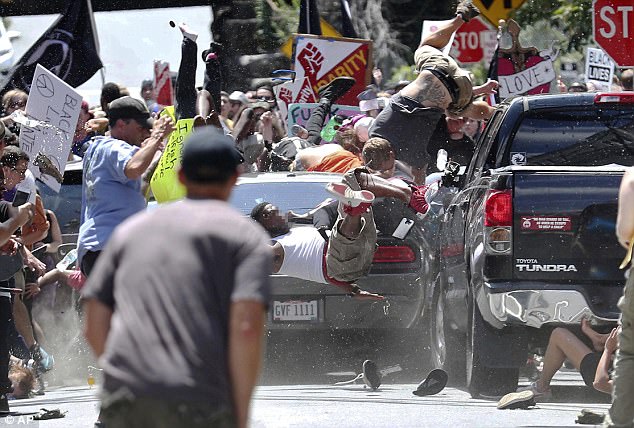 The Dodge Challenger (pictured), which is registered to Fields, plowed into counter protesters, killing one woman and hospitalizing 19 others, as violence erupted at a rally where thousands of white nationalists gathered for an alt-right event in Charlottesville, Virginia, on Saturday

‘I’m not even saying we’re not violent, I’m saying f***ing we did not aggress, we did not initiate force against anybody.

‘We’re not non-violent. We’ll f***ing kill these people if we have to.’

The rally culminated in the death of 32-year-old Heather Heyer after white nationalist James Fields Jr, of Maumee, Ohio, plowed his vehicle into the crowd, killing her and injuring 19 others.

Yet Cantwell said the rally was ‘worth it’ and that he even considered it a win for his side.

‘The fact that nobody on our side died I would go ahead and call that points for us,’ he said. ‘The fact that none of our people killed anyone unjustly, I think is a plus for us. We showed our rivals we won’t be cowed.’

The white supremacist even predicted that ‘a lot more people are going to die before we’re done here.’

Cantwell claims that his accounts on PayPal, Instagram, and other online services have also been shut down since the documentary aired exposing him as racist.