A white professor at an Indiana university apologized to a black student and his class mates after he called campus police Tuesday because the senior wouldn’t move his seat.

A video posted on social media shows the the Ball State University student, Sultan ‘Mustafa’ Benson, being asked to move to the front of the class room by a campus cop.

When the officer asked if Benson was being disruptive, he receives a collective, ‘No!’ three times from several students.

Ball State University student, Sultan ‘Mustafa’ Benson (pictured), said he refused when he was asked to move to the front of his class room by a white professor on Tuesday, and as a result, the instructor called campus police 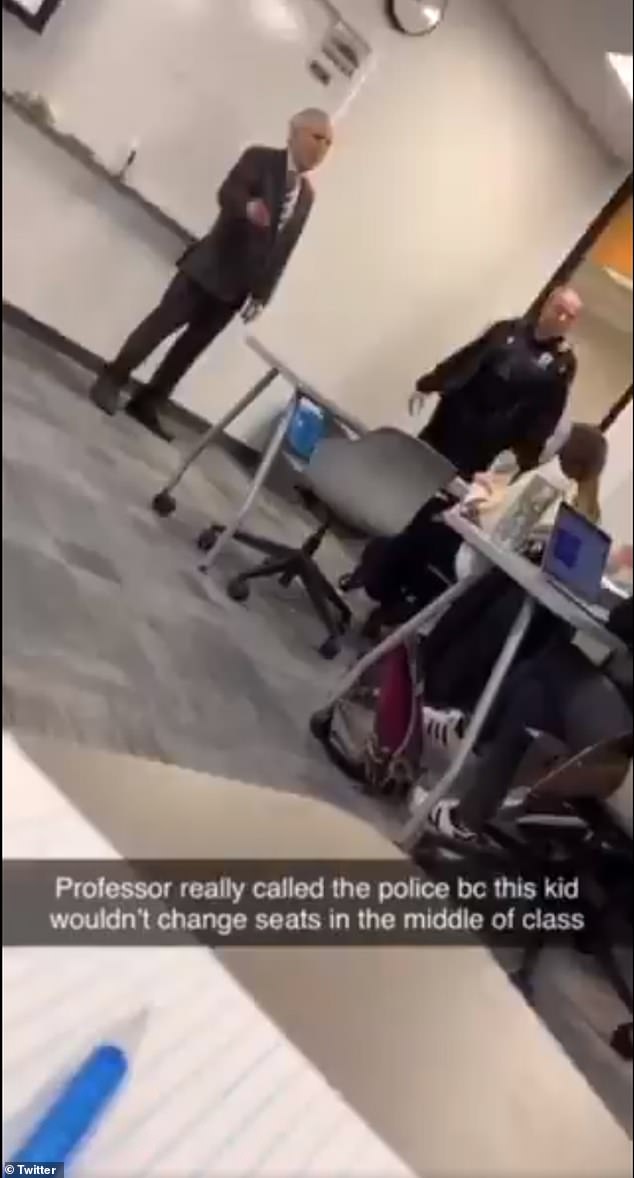 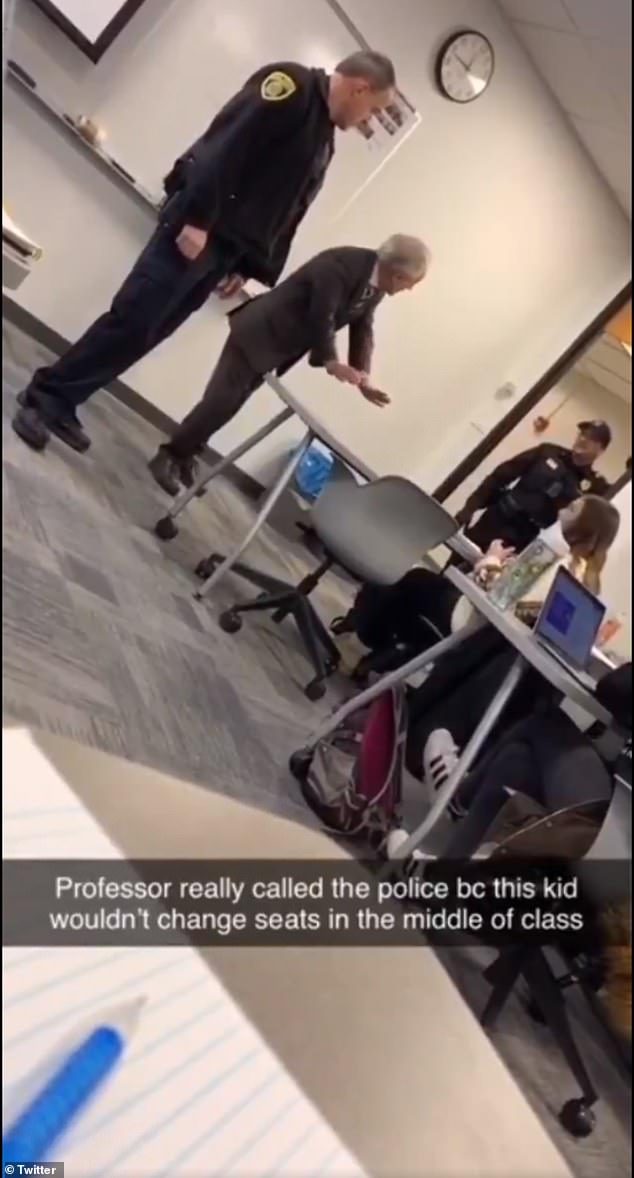 The professor, Shaeen Bona, is seen in the video asking the cops who arrived to the class to get his student to move to a front seat in the class 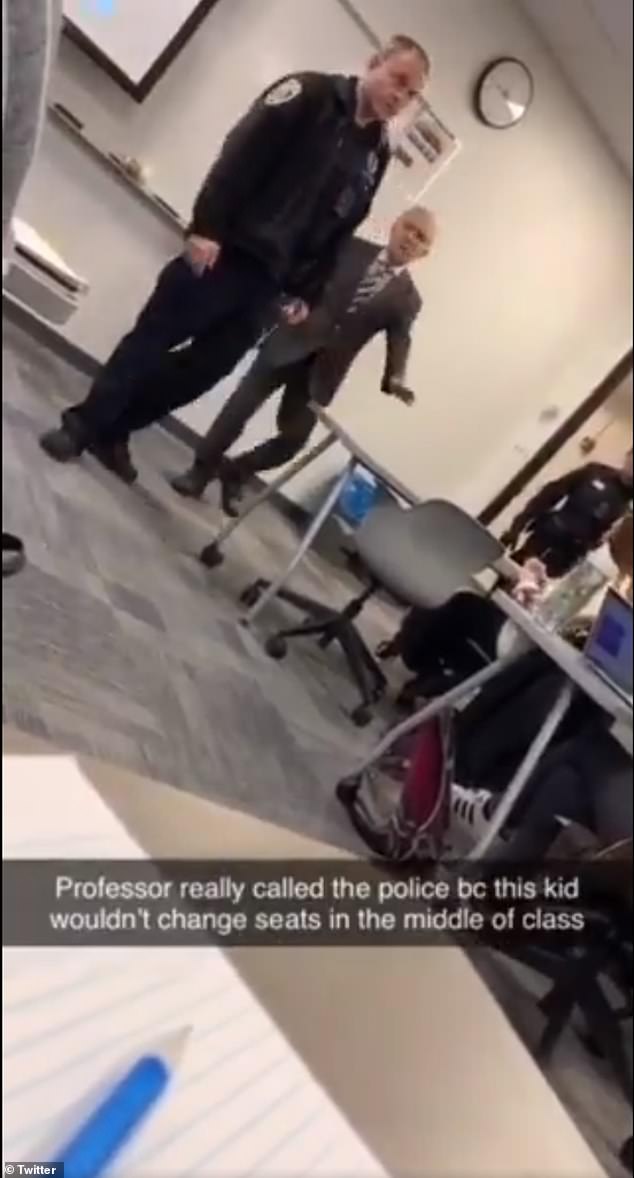 An officer in the footage is seen asking the student whether he was being disruptive, to which he gets a collective ‘No!’ from several students

Benson is seen in the footage declining the instructor’s request to move from the rear of the class to the front and leaving. He later tweeted he was ‘totally disappointed’ by the incident, to which the university responded back that it was conducting a review of what happened.

The professor, Shaheen Bona, later wrote to Benson and the class to say he was charged with providing an ‘excellent educational experience’.

‘I am sorry that my actions today did not contribute to that,’ Benson wrote, the Star Press reports.

Benson, in an interview with the news outlet, complained the university wasn’t treating the incident as a ‘discrimination act’.

He called it ‘a big issue, a huge issue,’ that cops were called to the class, because once the authorities were summoned, the outcome ‘could have gone several different ways.’

‘I don’t think they’re getting the concept of that yet,’ he told the Star Press.

‘I really want Ball State to do something,’ he also told WTTV.

‘I don’t know man, I want them to do something that stands out that’s different. I don’t want anybody else to feel like this,’ he added in his comments to the news outlet.

Ball State University student Sultan ‘Mustafa’ Benson, who is black and was apologized to by a white professor who called campus police on him after he asked him to move to the front of his class, tweeted he was ‘totally disappointed by the incident.’ 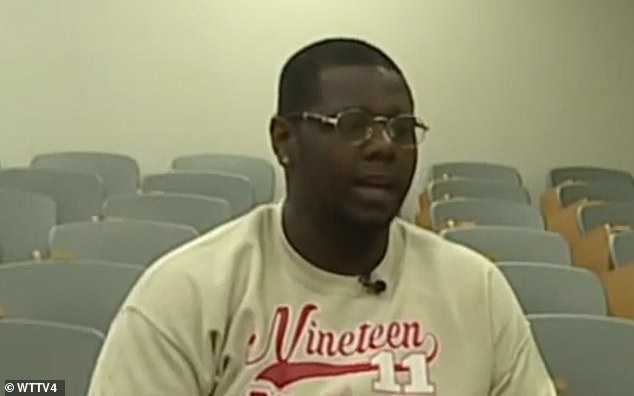 Benson (pictured) said he wants Ball State ‘to do something that stands out that’s different. I don’t want anybody else to feel like this,’ he added in his comments to the news outlet’

University President Geoffrey S. Mearns wrote the student body on Thursday to say that he was out of town attending alumni events in California, but aware of the incident and taking action.

Mearns said he was in touch with Provost Susan Rivera-Mills ‘monitoring the situation,’ and that Bona’s decision was ‘a gross error of judgement,’ and an ‘unwarranted overreaction.’

He said school officials met with Bona, who has been at Ball State since 1983, to express their ‘collective concerns that the situation had unnecessarily escalated, and that corrective measures were put in place. Those included ‘appropriate training and oversight of the professor going forward.’

University President Geoffrey S. Mearns wrote the student body a letter (pictured) on Thursday to say that he was out of town attending alumni events in California, but aware of the incident and taking action

The president added that officials were meeting with Benson and the students from the class. He laid out several actions the school would be taking when he returned to campus, including scheduling a meeting next week with the Black Faculty and Staff Association ‘to seek their guidance on how we can continue to create a more inclusive campus community.’

Mearns also said he would reach out to the leadership of the Black Alumni Constituent Society to seek out ‘their counsel as well’.

Benson provided the Star Press his version of what happened. 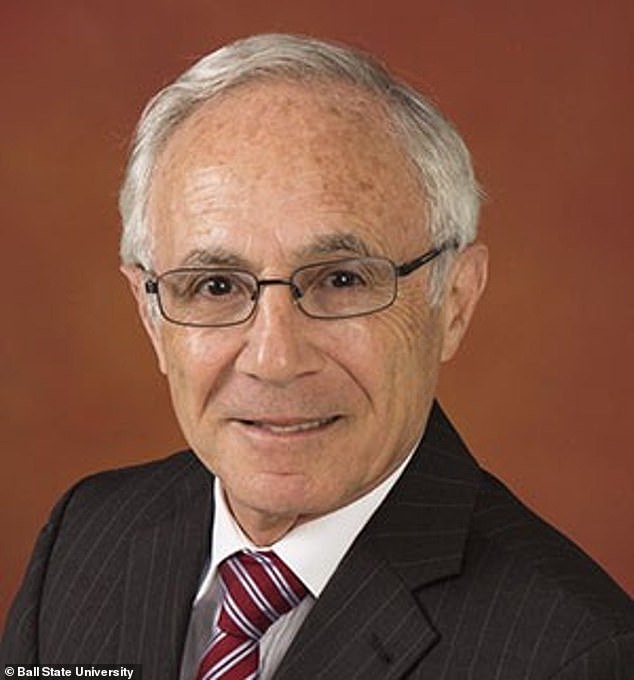 Borna’s class had assigned seating, and Benson originally had been in the second row. But when he arrived Tuesday he found another student sitting where he was supposed to be, and moved to a back row seat, as instructed by Bona.

Once in the back, he set up his laptop and had plugged it into a wall outlet.

When another student vacated a seat in the front, Bona asked Benson to move, but he wouldn’t comply, reports the Star Press.

‘I was not acting out, I was not talking on my cell phone, I was learning, I was following the lesson plan,’ said Benson, who declined to move seats because his computer was still charging.