A white professor at the University of Texas at San Antonio has come under fire allegedly calling police on a black student for putting her feet up on a chair and is now under investigation for potential discrimination.

She points towards the student she has a problem with and the black female student named Paige Burgess stands up and is escorted out by three officers.

Classmate Apurva Rawal posted the shocking video on Twitter on Monday where the minute-long clip has racked up a whopping four million views.

White biology professor Anita Moss kicked  black student Paige Burgess out of her classroom for allegedly putting her feet up and being disrespectful. Moss pictured standing in navy, Burgess is seated wearing a gray sweater and looking at her 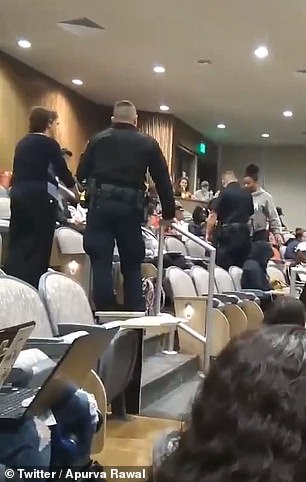 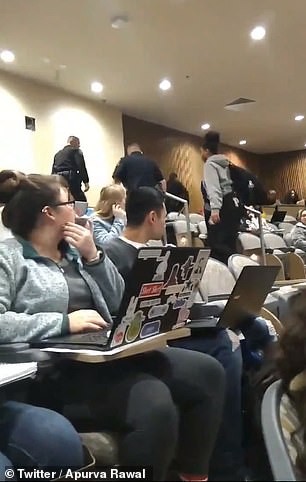 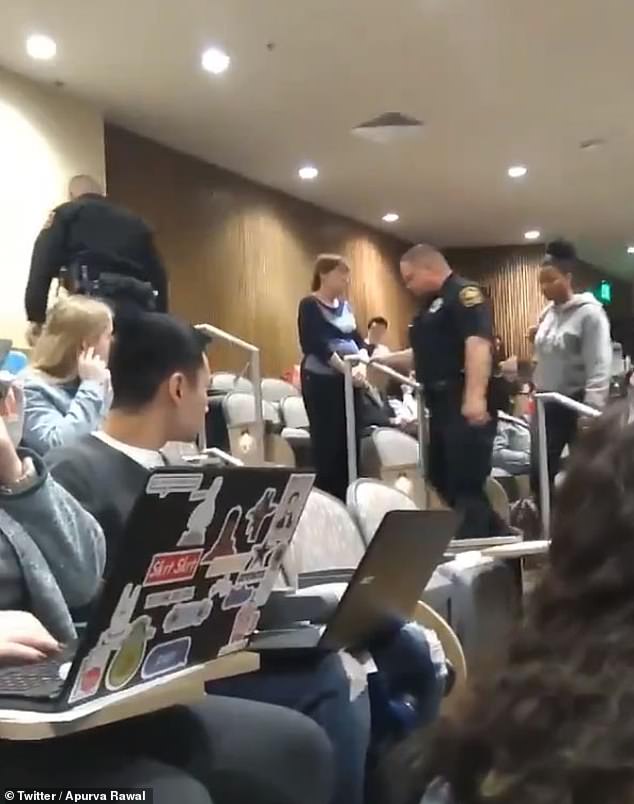 Classmates say that she was kicked out for putting her feet up in a prior class, which angered the professor. On Monday without talking or interrupting lecture, she was asked to leave

‘So this happened today in class, a girl had her feet up and the professor called the police after calling our class uncivilized (sic),’ he wrote.

‘This professor stopped class entirely and stepped out to call the police just because one student had her feet up on a seat in front of her. Mind you she wasn’t talking or interrupting lecture,’ he added.

In the shocking clip the students stare as the Burgess cooperates with three police officers and leaves the classroom, without making eye contact with Moss who watches as she’s taken away.

When another student asked why calling the cops was necessary, the professor cancelled the rest of class.

After the post went viral Rawal shared a long statement, accusing Moss of being repeatedly unfair and unreasonable with the class.

‘In a prior class, the student in question, Burgess, had her feet resting on the  back of the seat in front of her during lecture. The professor stopped mid-lecture to ask the student to put her feet down, and that her behavior was disrespectful to her, and the student complied,’ Rawal wrote.

He said that on Monday’s class professor Moss arrived late and instead of starting lecture she handed out printed copies of the UTSA student Conduct and Community standards, once again talking about civil behavior. 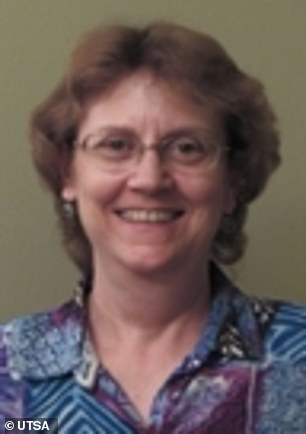 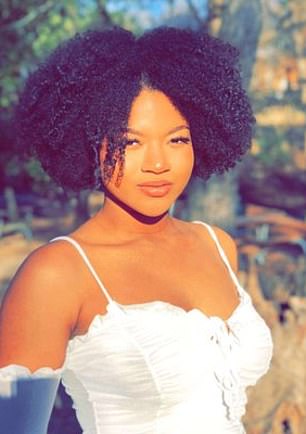 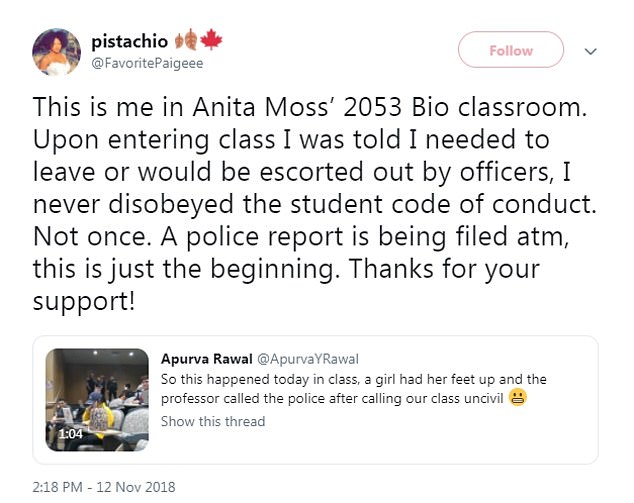 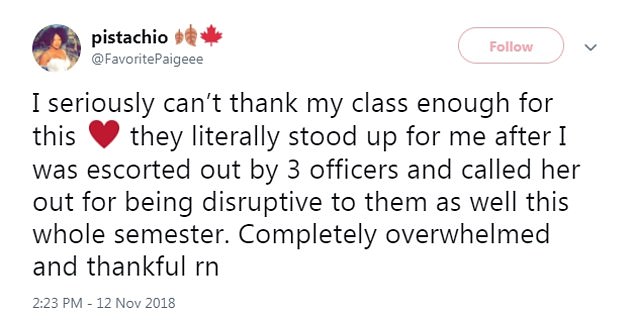 ‘The professor then confronted Burgess, and demanded that she leave class, as she was going to drop her from the class for the semester. Burgess then asked Professor Moss why, as she did not have her feet propped on the chair in front of you, nor was she disrupting the learning environment of the other students in the class,’ Rawal said.

Burgess said Professor Moss mistakenly emailed another student thinking it was Burgess, asking to meet and discuss her behavior prior to class. During class Moss asked her to leave, but Burgess refused, leading the professor to call in police.

The university has launched two investigations to look into the incident following the viral tweets – one for ‘potential discrimination’ and another for ‘classroom management’.

Burgess identified herself as the student in the video on Twitter and thanked her classmates for defending her name.

‘This is me in Anita Moss’ 2053 Bio classroom. Upon entering class I was told I needed to leave or would be escorted out by officers, I never disobeyed the student code of conduct. Not once. A police report is being filed atm, this is just the beginning. Thanks for your support!’ she said tweeted on Monday afternoon. 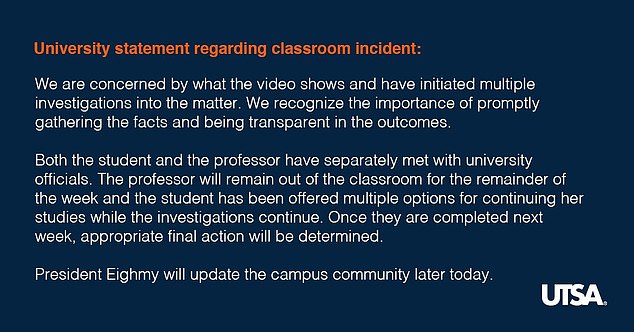 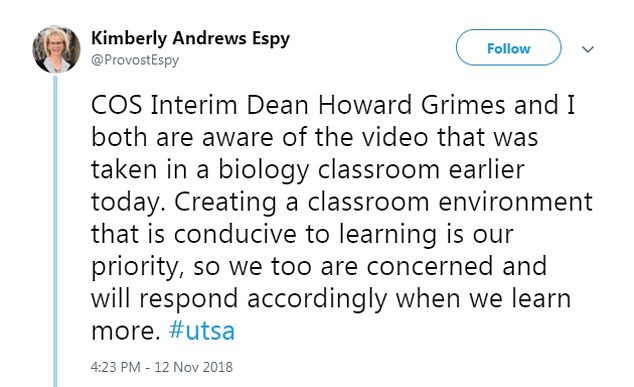 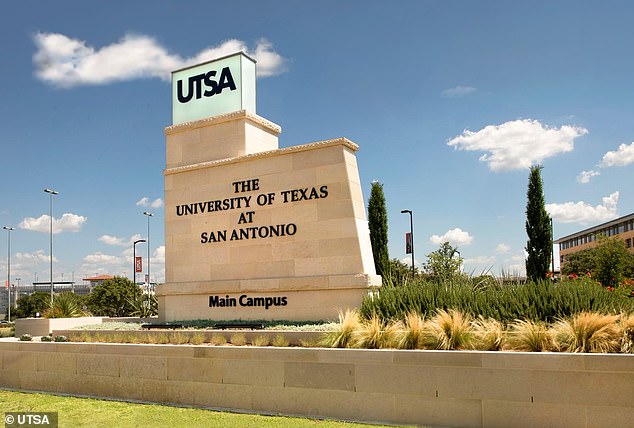 ‘I seriously can’t thank my class enough for this [love] they literally stood up for me after I was escorted out by three officers and called her out for being disruptive to them as well this whole semester. Completely overwhelmed and thankful rn,’ she added.

UTSA president Taylor Eighmy issued a letter to students on Wednesday saying Moss will not be teaching any time soon.

‘For the best interest of all involved, the faculty member’s classes will be taught by another faculty member for the remainder of the semester. The student involved in the incident has been welcomed back to class and offered support services. Once the two investigations are complete next week, appropriate administrative action will be determined,’ he said.

Provost Kimberly Andrews Espy also released a statement saying she and the dean are aware of the video and ‘creating a classroom environment that is conducive to learning is our priority.’

UTSA has not confirmed whether Moss has been suspended while the investigation takes place, according to Mic.

Meanwhile Moss has been coined ‘Bio Betty’ on Twitter for kicking out the student.

‘She should be fired. Immediately. Jesus Christ the class wasn’t even full,’ another added.

‘Wow. This is messed up #BioBetty,’ another wrote.