Authorities in Colorado are investigating the death of 42-year-old white supremacist Benjamin Davis, whose body was found in a prison on Saturday

Authorities in Colorado are investigating the death of 42-year-old white supremacist Benjamin Davis, whose body was found in a prison on Saturday.

Davis, who headed a white supremacist gang behind bars known as the 211 Crew, may have committed suicide, according to the Denver Post.

He was serving a life sentence for crimes committed during his incarceration.

As head of 211 Crew, he is alleged to have been involved in the murder of Tom Clements, the former head of Colorado’s Department of Corrections.

Clements was assassinated in his home in March 2013.

The DOC is now investigating.

So far, it has not been forthcoming with information because of fears that news of Davis’ death could stir unrest among his followers behind bars.

‘You have a high-ranking member of 211, and issues his death could cause in our facilities – it could cause disruptions for us,’ DOC public information officer Mark Fairbairn said.

‘That’s what we are trying to avoid.’

The man who killed Clements, Evan Ebel, was released on parole at the time of the 2013 assassination.

Ebel was a member of 211 Crew. Authorities investigated the possibility that Ebel was acting on the orders of Davis and other gang ‘shot callers.’

Ebel died in a shootout with Texas law enforcement officials two days after he killed Clements.

Since Ebel’s death, authorities made numerous arrests of possible co-conspirators in the Clements killing, which officially remains unsolved over four years later. 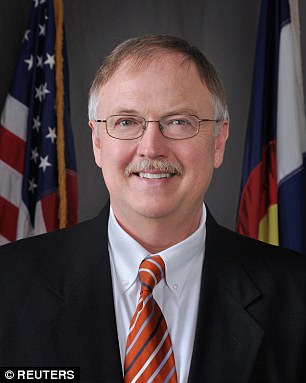 As head of 211 Crew, he is alleged to have been involved in the 2013 murder of Tom Clements (above), the former head of Colorado’s Department of Corrections

Investigators have obtained text messages and cell phone records in an attempt to piece together details of the murder and the possible role of the 211 Crew.

Davis was sentenced to 96 years in prison for activities related to 211 Crew.

Authorities said that Davis and other crew members conspired to commit crimes by using coded notes and secret slang in order to evade detection by prison guards.

The 211 Crew, which took its name ‘211’ after California’s penal code for robbery, counted members who would tattoo themselves with Irish shamrocks, Nazi swastikas, and Viking horns.

According to court records, Davis founded 211 Crew after a black inmate broke his jaw in a Denver jail.

Davis is believed to have started the gang out of the belief that it was the only way to gain protection from rival black and Hispanic gangs behind bars.

Colorado officials estimated that by 2005, there were 300 gang members in prison.

Davis first entered prison after convictions for armed robbery and narcotics use.