Whitehall officials tasked with drawing up the government’s disaster contingency plans never considered the possibility of senior ministers being ‘taken out’ one by one, it was claimed today.

Plans for how the government would continue in a range of worst case scenarios are said to have focused on things like military strikes and terror attacks which incapacitated many senior government figures at the same time.

That means that when coronavirus swept through Downing Street and took key players out of action there was reportedly ‘confusion’ about who was in charge of what.

The claims are likely to spark a furious bungling row amid growing suggestions that the government was not adequately prepared for the ongoing crisis.

Boris Johnson, pictured in Downing Street in February, is currently in hospital recovering from coronavirus 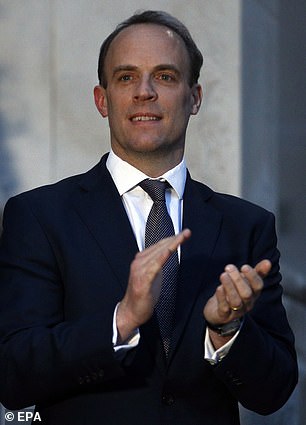 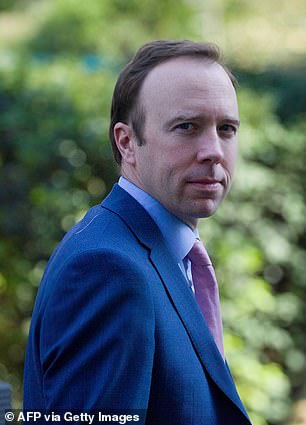 Dominic Raab, the Foreign Secretary (pictured left), has been put in charge of running the country while Matt Hancock, the Health Secretary, is back at work after recovering from the disease

Prime Minister Boris Johnson and Health Secretary Matt Hancock both tested positive for coronavirus with the former still in hospital recovering while the latter had to work from home for a week.

A number of other ministers, including Michael Gove, and numerous Downing Street aides including Dominic Cummings have also been forced to self-isolate after either developing symptoms or coming into contact with someone with symptoms.

Foreign Secretary and First Secretary of State Dominic Raab is deputising for Mr Johnson while he is out of action but there are concerns that the government will effectively be in a state of paralysis until the PM returns to work.

A long-standing top secret plan drawn up by the Civil Contingencies Secretariat never considered circumstances where senior ministers were incapacitated one by one, as they have been during the coronavirus outbreak, according to The Telegraph.

One senior Whitehall source told the newspaper that ‘we never planned for the Prime Minister to be taken out by a disease like this’ and there was not a formal blueprint in place for who would take over in such circumstances or what the ‘exact chain of command’ would be.

‘That was left up to the Cabinet Office, who had a plan for a nuclear strike, or a terrorist attack, or something of that nature,’ they said.

The source said ‘we never planned for ministers to be taken out one by one’ and that had caused ‘some confusion over who is in charge’.

Number 10 had repeatedly stressed last month that Mr Raab would stand in if anything happened to Mr Johnson.

But there are questions over the extent of the Foreign Secretary’s powers now that he is in charge, with supporters of the belief he is feeling frustrated at the current set up.

One Tory ally said it was ‘difficult’ for Mr Raab because while he feels he has been given authority to take charge of meetings and make decisions many in the Cabinet ‘appear to be going around saying it’s a collective’.

Meanwhile, some Tory MPs have pointed the finger of blame at Mr Cummings, with one claiming the ‘Cummings plan of a centralised government is unravelling on a daily basis’.

Concerns over the government’s current decision-making process have also prompted critics to suggest the relative inexperience of Mr Johnson’s Cabinet may be hampering the UK’s response.

One Tory source said none of the current crop of Cabinet ministers have an ‘independent power base’ and many are ‘extremely insecure’ about their positions, making them unlikely to make decisions on their own.

That means that on key issues like whether the lockdown will be extended ‘nothing will happen until Boris is back in the saddle’, they said.